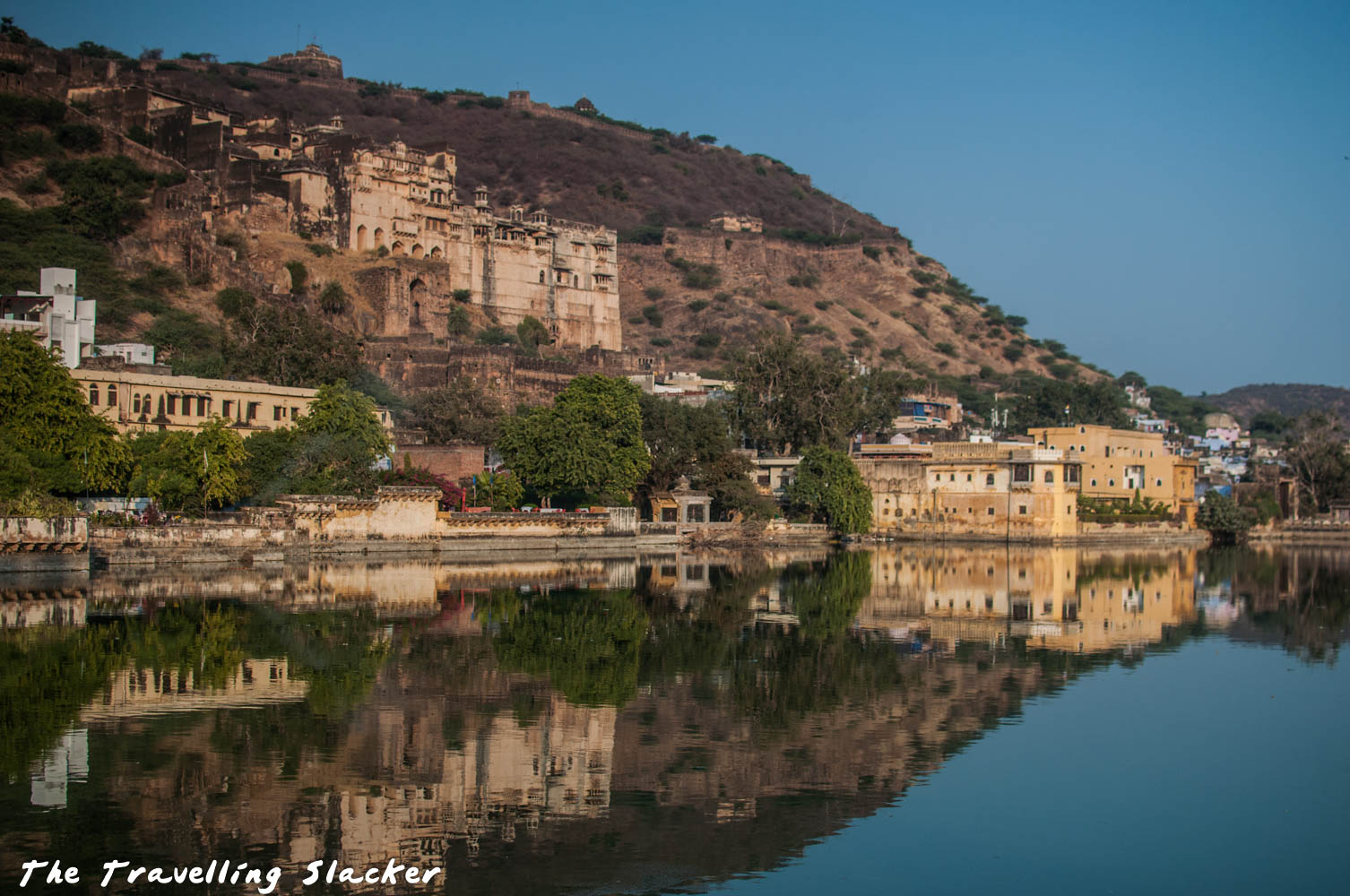 I left the bus and started walking towards the Taragarh Fort. However, soon I was distracted by a very colorful tea shop. I ordered one spicy kulhad and started talking to Krishnaji who is of course the owner of Krishna Tea Shop. He has been there for more than two decades and is easily the most popular joint among the tourists. The inner sanctum of the shop is full of psychedelic graffiti made by visiting tourists over the years. He also told me that tourists are less this season due to demonetisation but also expressed hope that this will be good in the long run.

I was in a hurry but I ended up spending almost an hour here. This also reminded me yet again why I decided to come back again. Last January I’d made another quick trip here but I felt could not do justice to it. I saw the magnificent frescoes of Chitrashala and Sukh Mahal but as I was returning, I noted the local houses, walls, and public facilities in the old town, all painted in vivid colours. The royalty had initiated and patronized the Bundi school of paintings but unlike some other places, the art here has not remained a sanctuary of the ruling classes and the elite but has spilled over to the streets. That is why this trip was dedicated as much to the plebs of Bundi as much it is to the royalty and as much to the present, as much it is to its celebrated yore.

So, I suppressed my heritage fetish for a while and started walking around the town. While Bundi has now grown to be a big city, the outer areas are just like any other place. However, the old walled city around the Fort, just like Old Delhi, is a different world altogether full of valiant knights, shapely women, burly elephants, gods, goddesses, and much more… all in two dimensons.

Surely the town can do with better drainage system and some other housekeeping but that is a common issue all over the country and I cannot really single out this one for the same. What sets it apart is the fact that it is like a living, breathing, art gallery. The walls are filled with joyous and colourful figures. However, unlike the big metropolises, they are not based on western anesthetics but proudly replicates the indigenous school of art.

It is also noteworthy that Bundi is as much a Blue City as Jodhpur is although not many are aware of this. There are parts where this Blueness is distinctly visible in various shades. Of course the real view is from the top of the hills but that is a different story (I did visit the fort later and will do a separate post on it).

I spent considerable amount of time walking around the city and finally started walking towards the Nawal Sagar Lake, one of Bundi’s many lakes. It is located just at the right place to offer great reflections of the Garh Palace and Taragarh Fort. Apart from the obvious visual delight, it also has a partially submerged Varuna temple. Since it is inside the water, it was not possible to have a closer look at the temple but from what I could see, it follows the same design as some other bigger temples in the Hadoti region such as Badoli and Jhalrapatan.

In short, Bundi is a smaller but more intimate artistic experience, compared to the more opulent palaces and forts of Jaipur, The Pink City but tourism is increasing here too. It is also a place where every time I learn about some other attraction. This trip was also no exception as I learnt about certain sites with newly discovered prehistoric paintings (Like Bhimbetka). These are apparently scattered around a 30 km radius around Bundi. So, like a clever movie franchise, Bundi is dangling another carrot in front of me. Another trip will have to be planned soon.

What else? My other ambition in Rajasthan is to visit Shekhawati, another area where art has become a way of life. You can read this road trip by Sushmita Sarkar that covers Shekhawati.