After visiting the Baroli Temples, I started walking towards Bhainsrorgarh, which was my actual target. It was at least 8 kms away and I could see no other mode of transport. The January sun was still pretty strong in these parts but tolerable. On hindsight, I probably could have taken one of the Chittor bound buses but none of them seemed to stop here. But anyway I came mentally prepared for the long walk and I had enough time.

The chimneys of Rawatbhata Nuclear Power Plant were visible at the horizon, but I had to take the westward diversion. The map showed that I was moving towards a bridge over the Chambal. But I could see no sign of the river as the town is at a slight depression compared to the river bank. I entered an area of vast and empty plots of land that looked like a swamp area. The winter had dried it up and so what was left with small puddles of water scattered all over the terrain. However, those puddles were swarming with waterbirds of various kinds, suggesting that the bigger water body is probably not very far away. 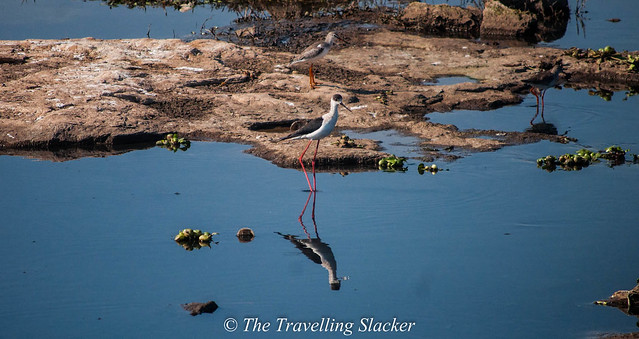 After an hour and a half, the road got slightly steeper and then after one turn the famed hillock of Bhainsrorgarh become visible. I was beginning to get tired but this sight encouraged me and I pushed myself to walk faster and finally reach the end of the horizon, where there was a bridge, and of course there was the river Chambal in all its unpolluted glory. 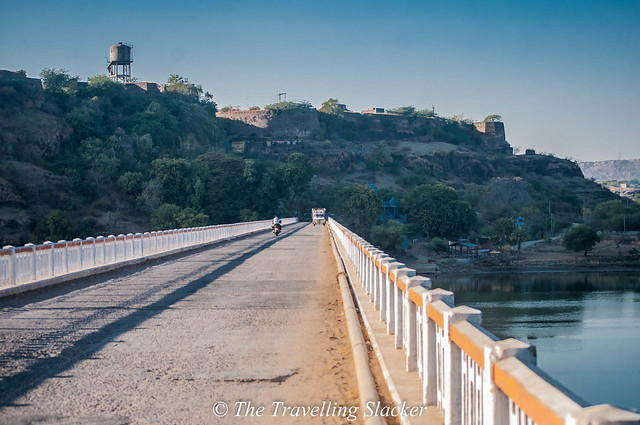 At this point, I must tell you why was I even trying to get to Bhainsrorgarh. I’d been looking to explore more of Chambal for the last couple of years. But my attention was mostly focused on the Agra-Dholpur-Morena region. But then one day I came across a photograph of Bhainsrorgar Fort atop a little hillock on the banks of Chambal. There was the reflection of the same on the crystal clear water of Chambal, a reflection so immaculate that no one will figure out even if you turn the photograph upside down. This was the view I was looking for!

So, I reached there, I saw the view I wanted to see… almost! The problem was the timing. It is located at such a position that you get the best view in the morning. Post noon, the sun gradually moves behind the hillock, thus making you shoot against the sun, the ultimate photographer’s nightmare. It was around 4 pm and I realized that I should have reached 10 hours earlier. I salvaged this much after a lot of shameless editing. Let me know what you think of this. 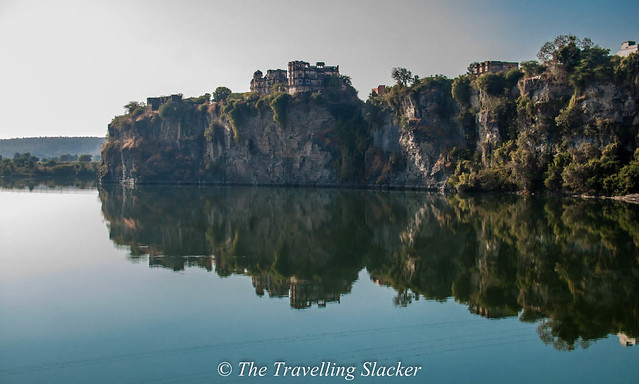 Coming to the fort itself, it is another Rajput construction as expected but traces of much older settlements dating back the 2nd century BC remain and ASI has done excavations in this region although I could not find much information online. The Fort itself has now been turned into a heritage hotel with rates that are light years beyond my budget. Here is a zoomed in view of the building. 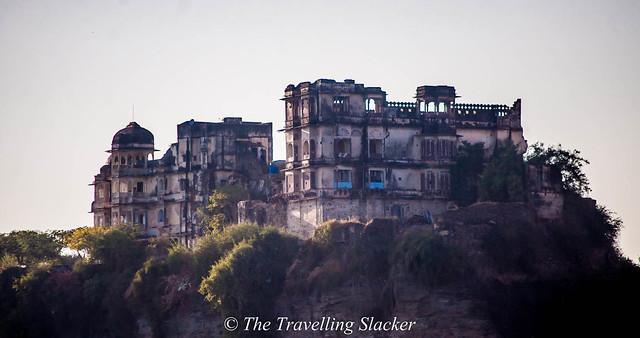 I crossed the bridge. I could climb up the hillock to have a closer look at the fort and its archaeological aspects. But I was tired, it was getting late and I had to get back to my hotel at Kota. I was also a bit disappointed with the lighting. So, I just focused my attention to Chambal by turning to the opposite direction. Here the light was just perfect. A delicate shade of blue was spread both over the sky and the water. Unlike other muscular and muddy rivers, Chambal was quiet and serene, so much so that it almost looked still and there were those reflections I was hoping for. 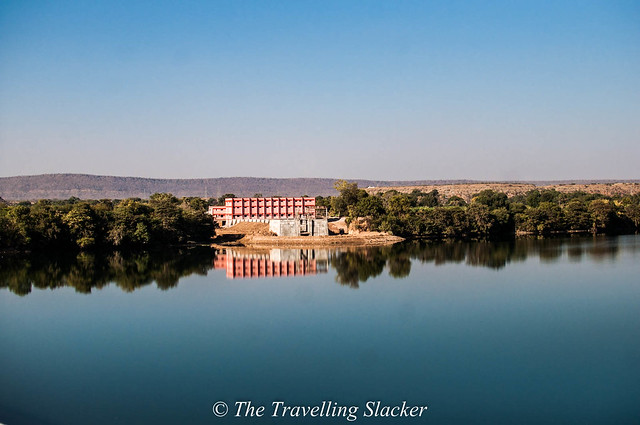 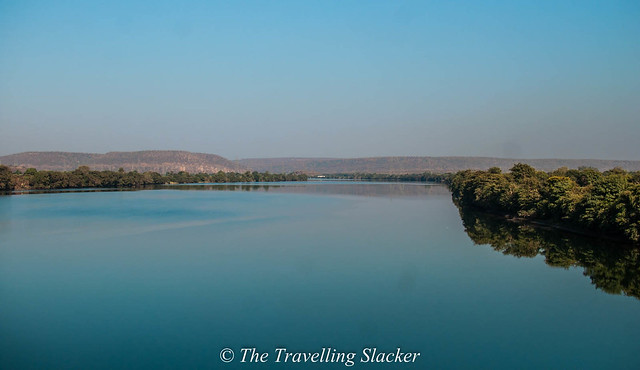 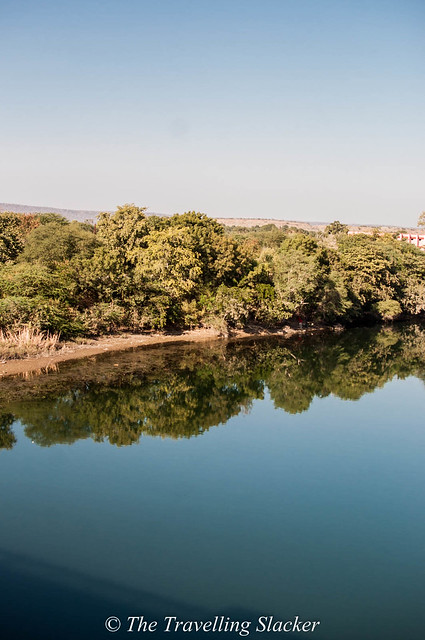 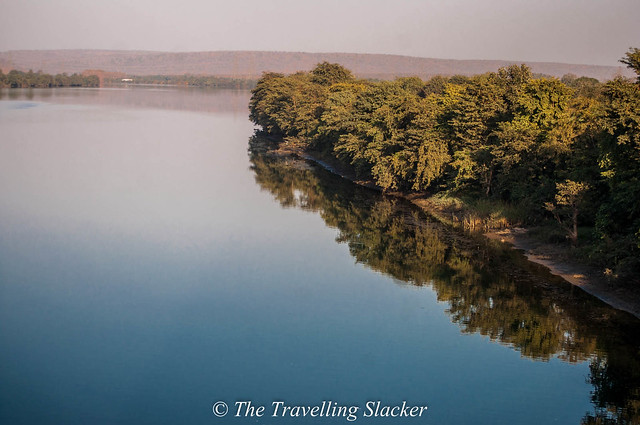 My return thankfully was much easier as a kindly local guy offered me a lift on his bike back to Rawatbhata, from where I got a shared car back to Kota. My trip was only partially successful. But I think I will return to this place sooner rather than later.

How to Reach Bhainsrorgarh Fort?

Bhainsrorgarh is around 58 KMs from Kota and 7-8 KMs from Rawatbhata. ENough buses and shared vehicles are available for Kota to Rawatbhata. After that, you can look for local options. I actually walked from there while I got a lift while returning. Some long distance buses  travel through this road, but you need to be sure about the route.

Where to Stay in Bhainsrorgarh?

The Fort in Bhainsrorgarh itself has been turned into a luxury hotel. But as expected, it is too expensive for mortals. So, you can stay in a hotel in Kota city and then make your moves.

Also Read: If you want to experience the real rugged beauty of Chambal Ravines, you need to be in the Dholpur-Bhind-Morena region. Here is a guide for the same.

12 thoughts on “Bhainsrorgarh: Reflections on Chambal”