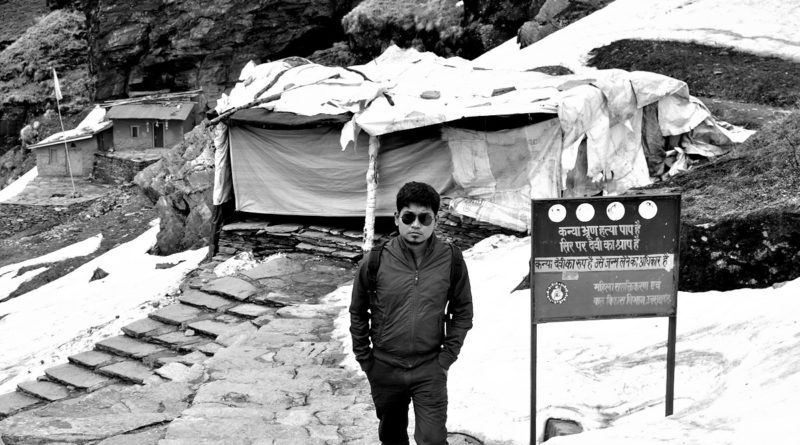 Travelling Slacker started a s atravel blog, but it intends to be a bit more than that. It focuses on Indian Himalayan states like Himachal Pradesh, Uttarakhand, Ladakh, as well as the frontiers of Northeast India. Personally, I am not averse to other areas and I have been to most parts of India but the primary focus remains on the aforementioned regions.

How and why did you begin?

Back in the summer of 2010, I finally took a break from my job as well as my eventless life and went for my first Himalayan trek. I was doing it solo but travelling solo was not trendy back then, at least in India. Nevertheless, as an introvert and a near misanthrope, it came naturally to me. During this trip, I also realized that beyond the usual cliched tourist spots, most great places in India lack good documentation. Especially for solo backpackers and budget travellers, useful information was in short supply. So, I thought I could do better than the existing players.

I took my time. For the first time in my life, I had some sort of a goal and I wanted to do it professionally with a long-term vision. Finally, I launched this website in 2011. Initially, it was a slow process. I still had a parallel job and was not travelling as much as I could. However, since the end of 2013, I have been doing this fulltime and have no intention of going back to that life.

You can still see my first ever post in this blog that I have kept unaltered.

You may want to read my narcicisstic post recounting the journey since 2011.

While there is no discrimination between destinations, my particular interests lie in desolated Himalayan valleys and forgotten archaeological vestiges of the great Indian plains. Initially, it was not by design but over the years I have ended up spending most of my time in the Himalayan states in the North like Himachal, Uttarakhand & J & K as well as the Northeastern Part of India.

What exactly is your long term mission?

I see myself as a travel writer of the proletariat. I am an extreme budget traveller of offbeat destinations. I want to show that even people who did not top their exams and do not have high flying jobs can also break free from the tyranny of life at times and travel on small budgets. Luxury resorts and fine dining are not for me. I will sleep on the footpath if that is legal and saves money. I never buy a travel package and avoid guides unless it is extremely necessary. I love very basic, budget hotels, sleeper class trains and state transport buses with open windows (non AC). Through these travelogues, I want to build content that provides genuinely useful tips and bridge the information gap for these offbeat destinations of Incredible India.

Have you been to any other country?

As you can see, I have a very specific focus on certain areas of India and I want to cover them comprehensively. Maybe I will do it someday but visiting other countries is not my priority as of now.

Have you ever published or got featured elsewhere?

Check this page for some of the published work. Although I do not update it regularly due to my characteristic procrastination.

What kind of traffic do you get in your blog?

Nowadays I get around 40000-50000 pageviews every month, 80% of it being organic search traffic from Google.

For any kind of brickbats, queries, and collaborations, mail me at [email protected]

You can also mail me if you want to get my Media Kit and web analytics details.

Are You Present in Any Other Platform?

I have started another website dedicated to Northeast India called Periplus Northeast. I also have a FB group to discuss travel & culture in NE India.

You’ll also find me on Medium at times.