Skip to content
I had no idea about Someshwar till I passed through the area on a bus to Kausani. I was just ogling at usual pine forests and winding roads of Kumaon when the road suddenly opened up to a vast, green valley. The bus quickly passed through it, without giving me enough time to enjoy it. I reached Kausani soon but I knew that I had to come back.

On the other hand Kausani turned out to be a highly disappointing place. I was coming here after a couple of nights at my usual hangout, Kasar Devi, where I had the best views with free WiFi at INR 500 homestay. At Kausani, as soon as I got out of the bus, I was surrounded by half a dozen hotels agents, you know, like those in Manali Mall Road, or Paharganj for that matter. It was a rude jolt, because it is too small a place in comparison and I did not expect something like this at all. Eventually I had to follow one of them and get into a hotel for INR 600. It is basically off season in March here. I think in the peak not summer everything will cost 2-3 times more.
Anyway, after taking the room, in came out to explore Kausani but soon realized that it was not a good day. The primary attraction of this small town is the view of the snowy peaks on the horizon but just like it happened in some other places in Kumaon earlier that month, the sky seemed dull and hazy, with no views whatsoever.
Kausani is not only limited to the peaks. It has some important monuments such as Anashakti Ashram, where Mahatma Gandhi spent a lot of time, a museum dedicated to Hindi Chhayavaadi poet Sumitranandan Pant, who hailed from this area, and many other ashrams. Kausani grew popular initially as a center for people who are into spirituality and meditation, before becoming a tourist hub.
I walked for half an hour but there was no sign of the Ashram. Eventually I reached a dead end, and started walking back. Finally, when someone pointed out the actual route, I also noticed the signboard, uprooted and lying on teh ground. It would have saved this wastage of time and energy only if it was erect. 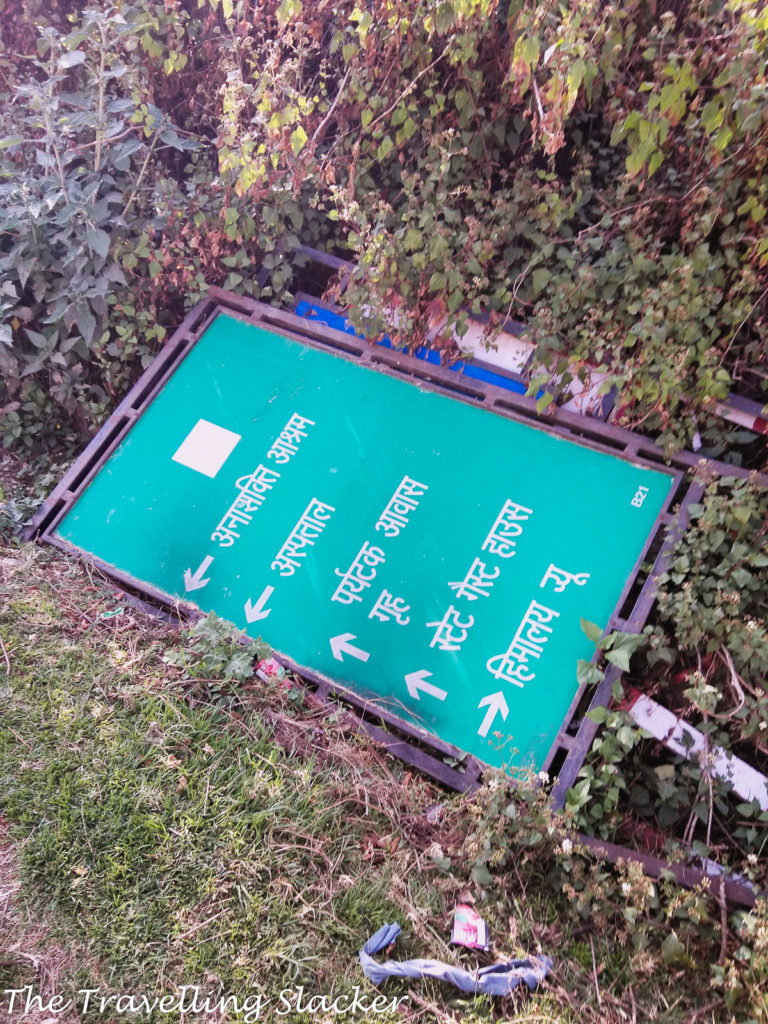 Anyway, I reached the Ashram finally, only to realize that it is a Sunday so most parts are locked and there was no one to talk too. I spent some time in teh compouynd and came out. The next target was the Pant Museum but by now I had realized that it will also be closed. Anyway, even locating it turned out to be an adventure. It is located in a small alley, that you reach by climbing a small flight of stairs. It took a lot of trime for me to figure that out. Finally I reached the musuem towards the evening. It was closed as expected. I took a photograph of SUmintranandan Pant’s bust. This was the extent of photography I did in Kausani.

Anyway, the image of Someshwar had not left my mind. Also, I wanted to do something to salvage teh disappointment of Kausani. I had to vacate the hotel at 12 noon the next day. So, I decided to utilize the morning to make a quick round of SOmeshwar. I woke up early, and found a shared car going towards Someshwar. He left me at the middile of Someshwar town within 20 mins and INR 30. While my primary motive was to click the capture of emerald green rice fields, I also knew about an acnient temple somewhere in the town. Locals call it “Somnath Temple”, I wonder what the Gujaratis will say about it.
I had a quick breakfast at a shop in the market that had just opened. I could hear teh devotional music coming from the temple but it could not be seen. The shopkeeper showed me the path, which frankly did not even look like a path. I had to pass through a narrow allow between the houses to finally reach the Temple. It seemed to be similar to othe rtemples in the hills such as Champawat, Jageshwar and Baijnath, but a very small one. There is also a “naula” nearby, a traditional water structure made to capture ground water. There was a similar structure near Baleshwar temple at Champawat. 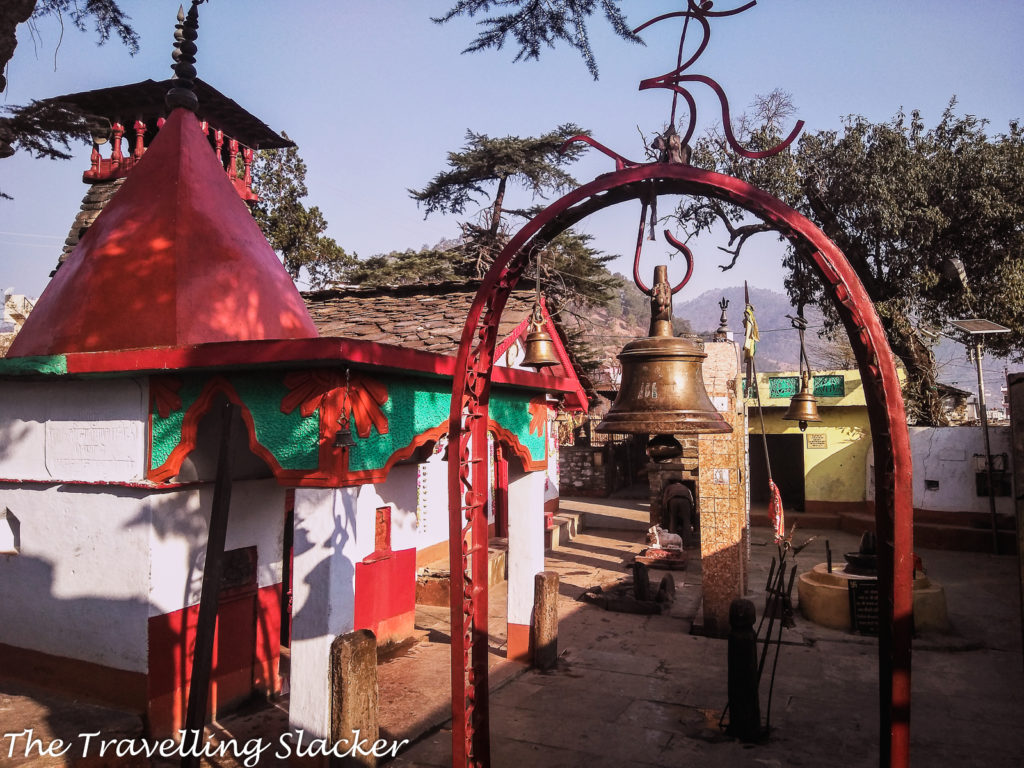 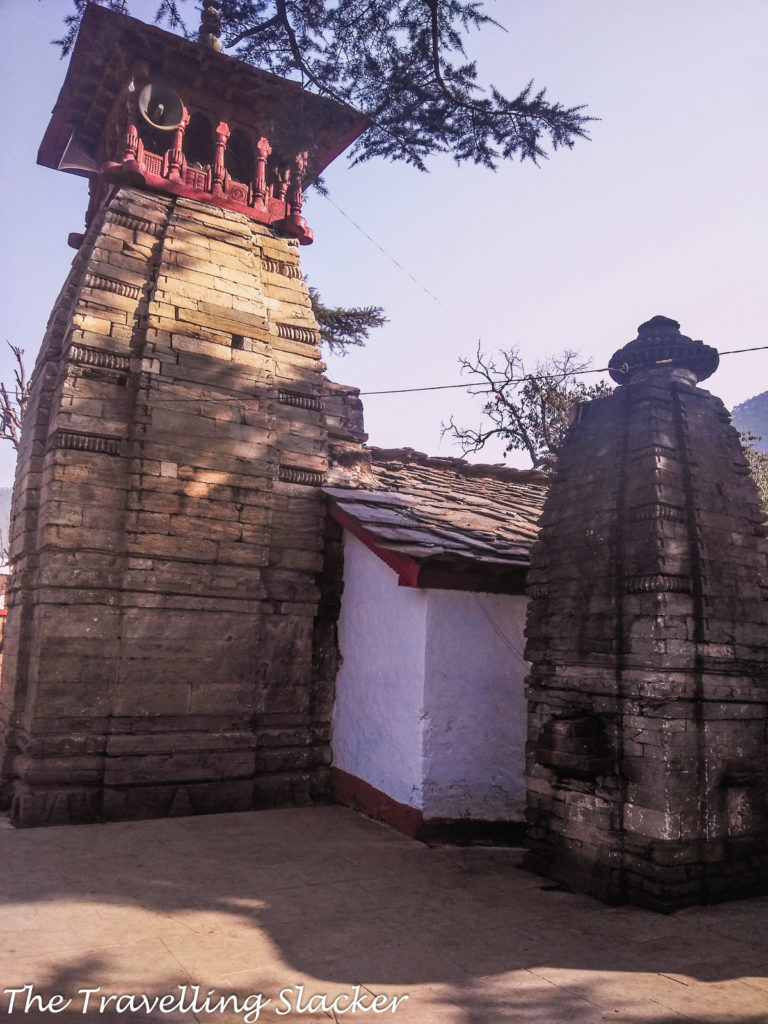 After clicking a picture or two, I decided to to focus on my actual motive, i.e. to photographs the hily streams and green fields. Someshwar is primarily fed by two rivers, Kosi and Sai. You can reach here by any Kausani, Garur, or Bageshwar bound bus from Almora. But most people just pass through it to reach more famous destinations. Determined to get better pictures, I walked out of the town to reach an open area, to get clear views.It was a sunny day and the fields seemed to have been recently planted with fresh saplings. 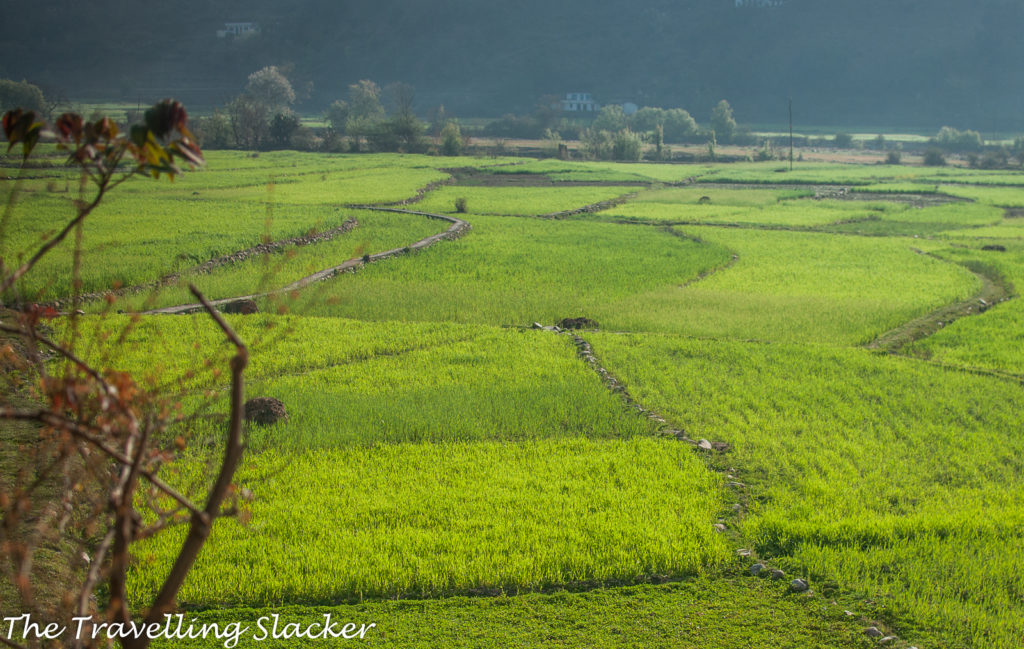 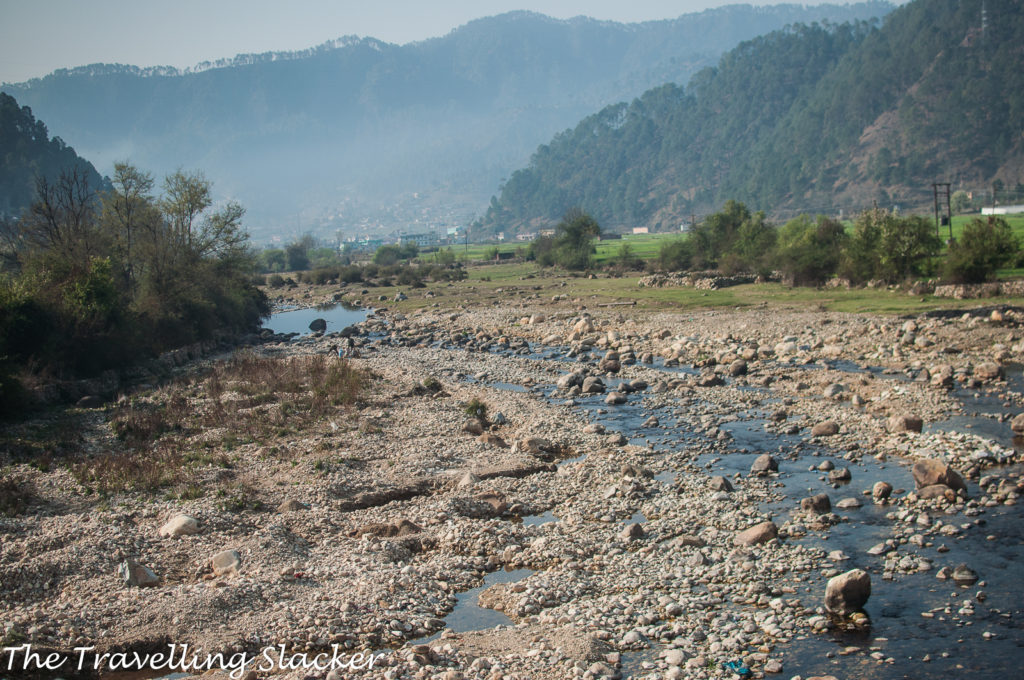 The previous day, I had noticed several suspension bridges on the rivers. So, my idea was to cross at least one of them and click pictures from different angles. I soon reached one of those bridges and crossed it too. Some local women were working in the field while pear trees heavy with spring blossoms were adding some additional contrast to the landscape. I clicked as many as possible till 9.30 am and then return to the road and found another ride soon enough to return to Kausani and managed to check out on time. 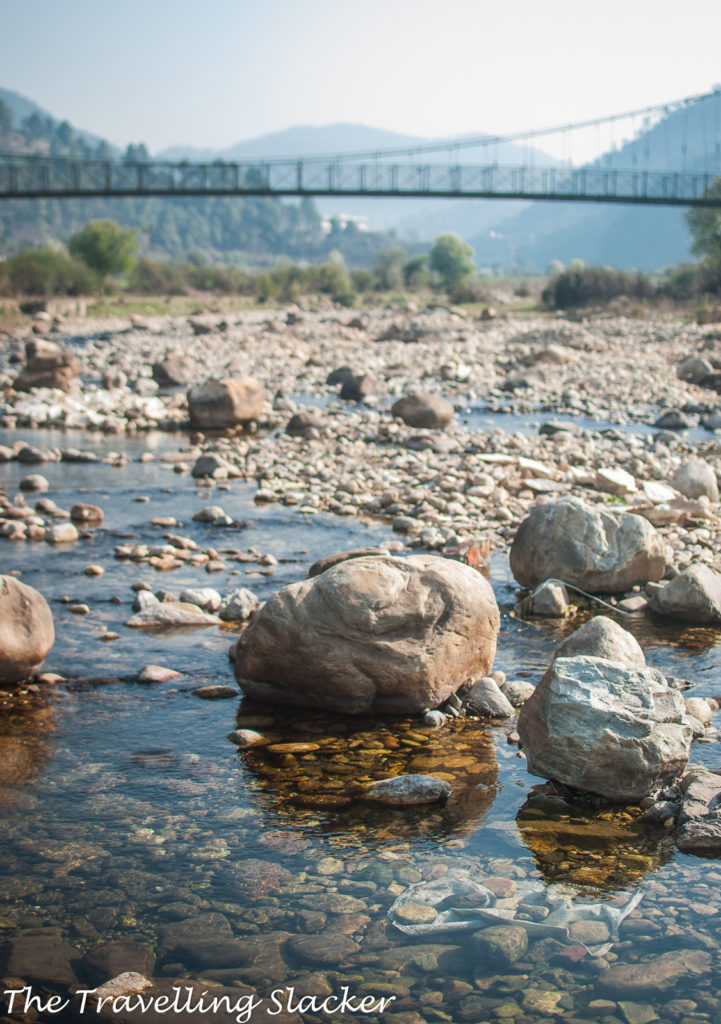 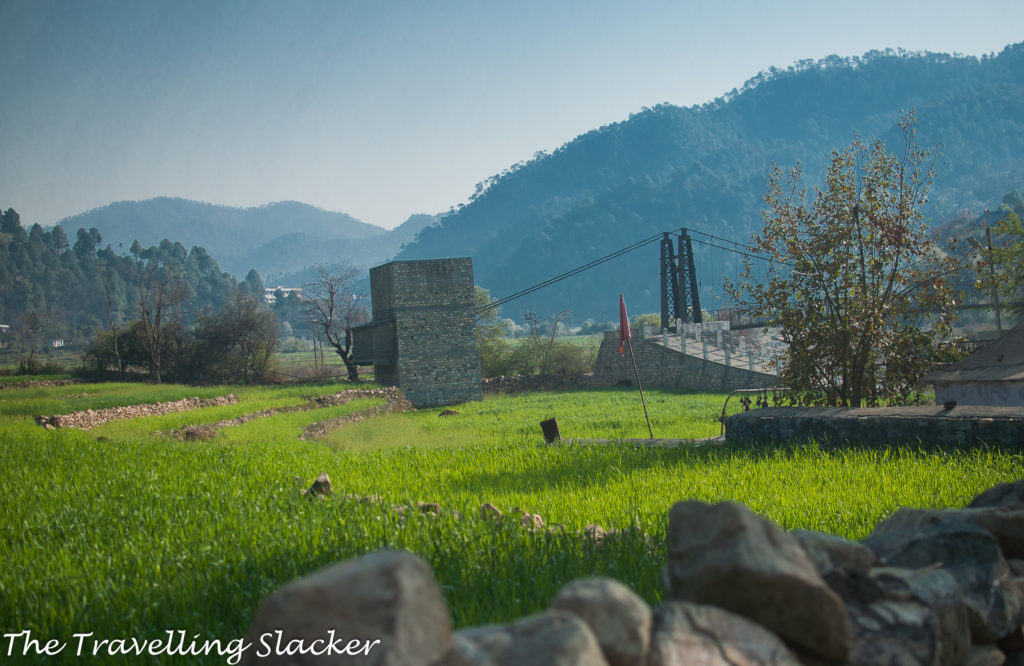 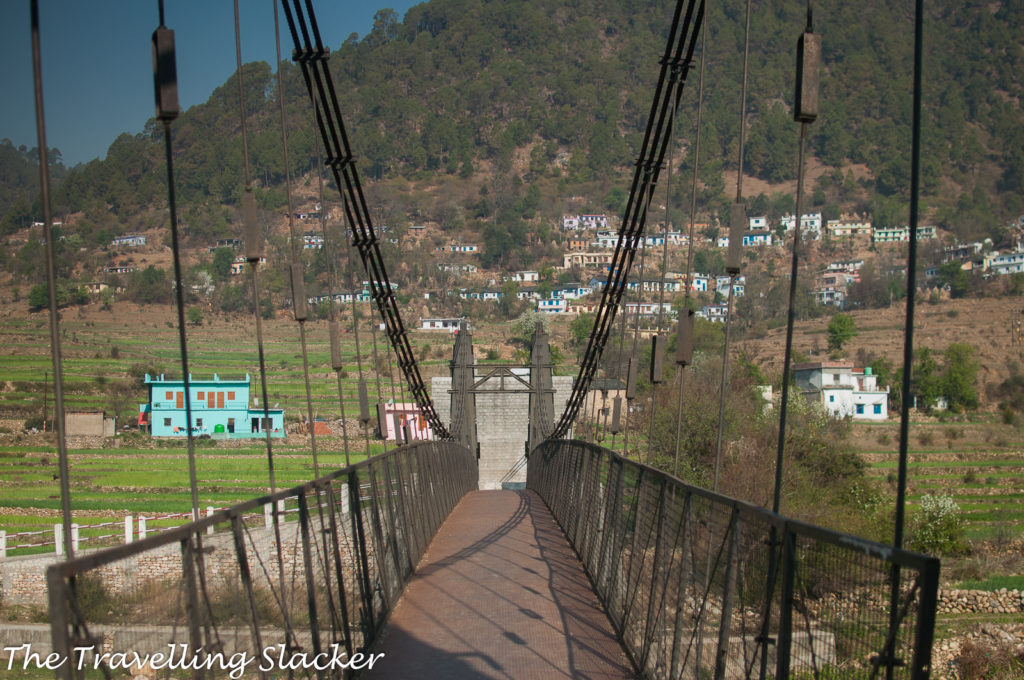 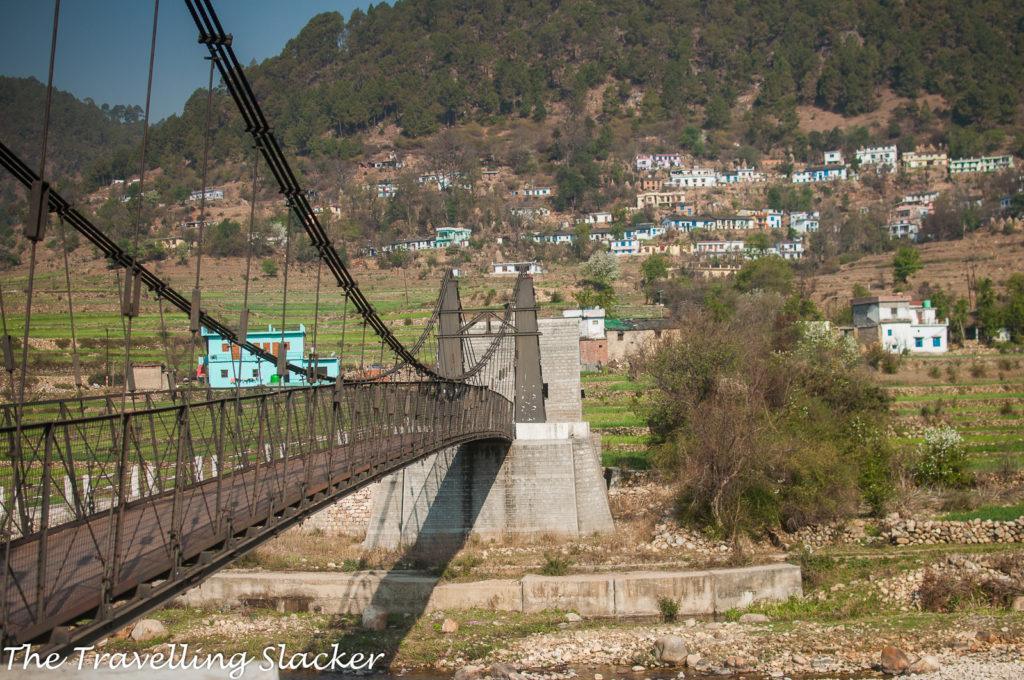 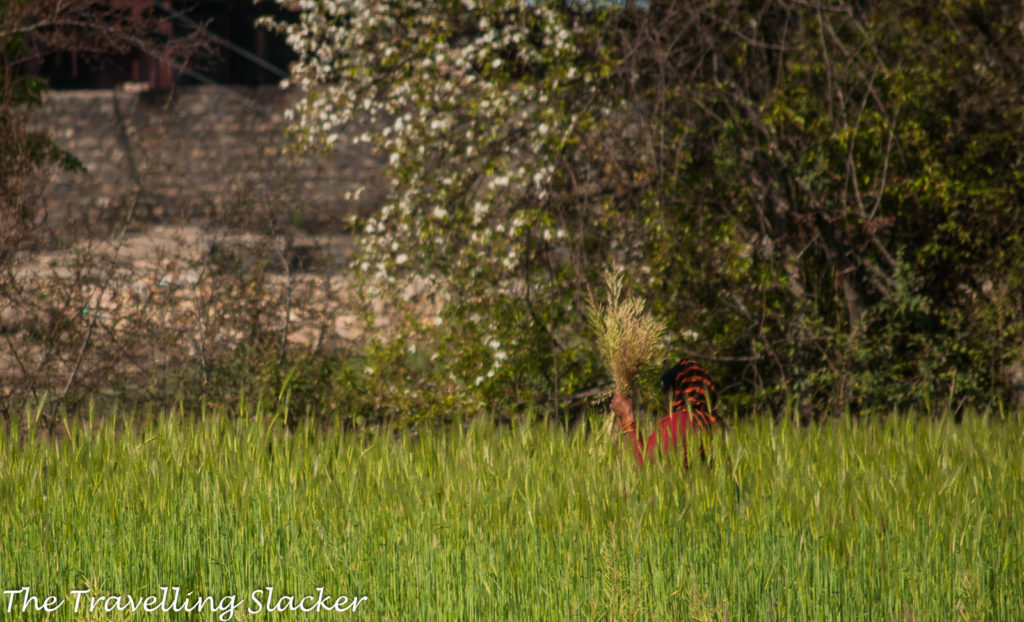 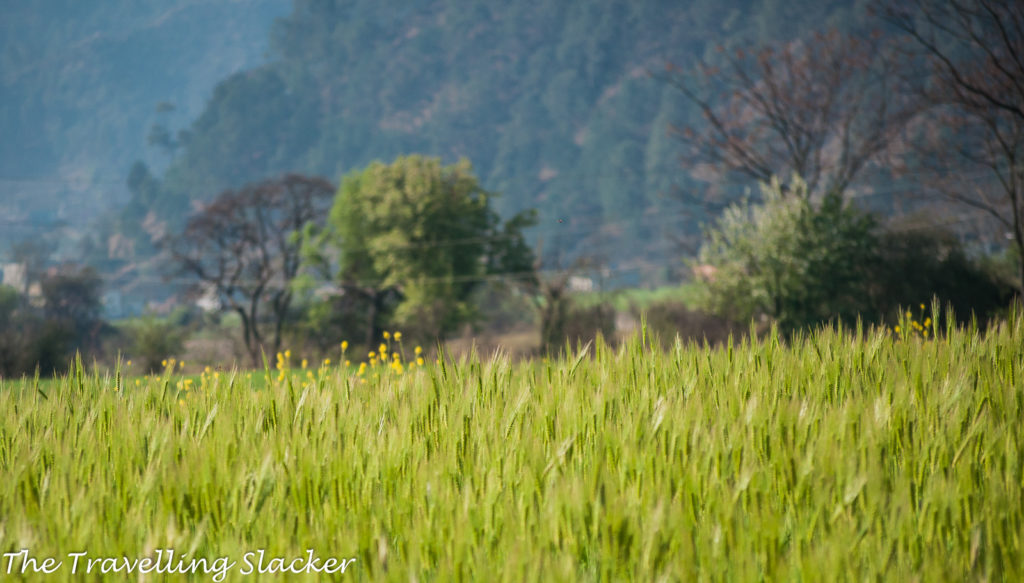 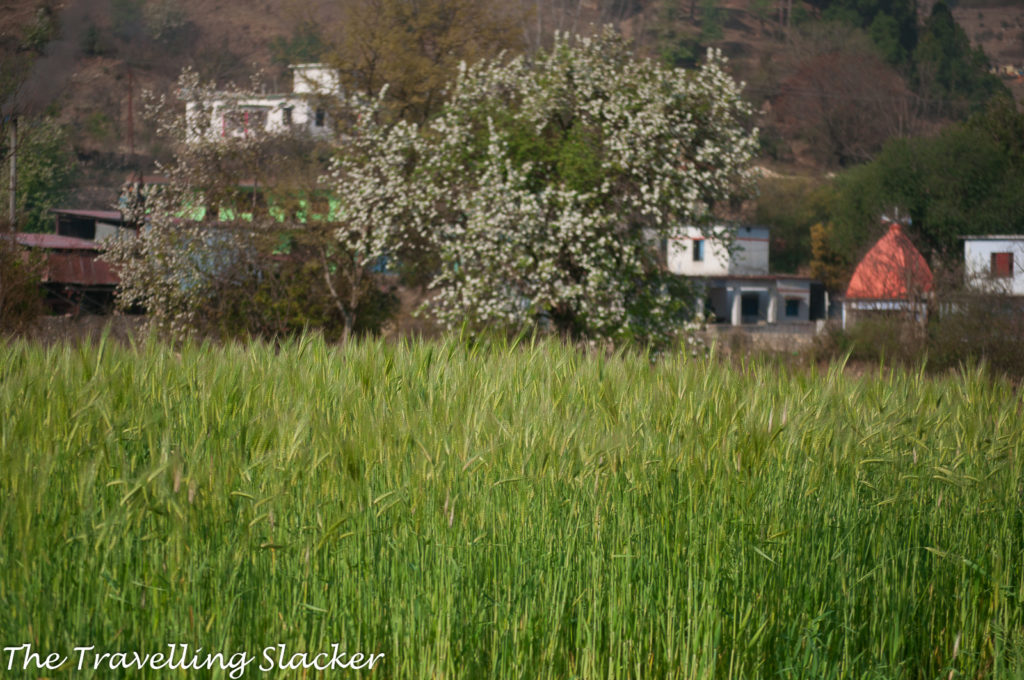 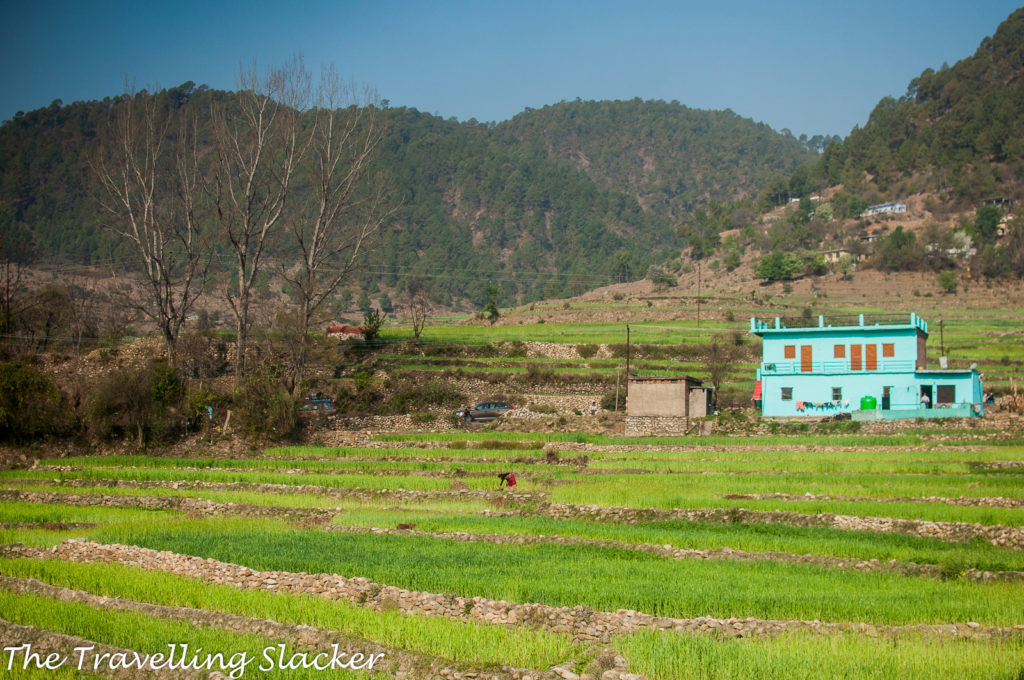 When I think of it, it was a minor detour, but it was delightful and after Pithoragarh, it was another delightful dose Himalayan spring. I moved on to Baijnath next, the town with simlar views but bigger temples. But that story will have to wait for a few days.