As the train reached Chakki Bank at around 4 am, we dragged ourselves unwillingly from our comfortable bunks, packed our bags and got down from our coach, and after a long time felt the winter shiver that Southern and Western India always denied us. (At this point some of you may be wondering what on earth this “Chakki Bank” is, I’ll explain that in the FAQ section.)

Anyways, the first rays of the morning indicated clear azure sky and pristine white clouds which was a welcome change from the dull and morbid skies of Rajasthan. As the bus slowly but steadily moved ahead into the Himalayas, the scenery kept getting better.

The bus initially moves through the plains for some time before officially leaving the great Indian plains and entering the mountains. To my respite, I found out that the road to Dharamshala is not as deadly as I’d imagined it to be. There are some sharp turns but there are several straight stretches that makes the bus ride fairly comfortable albeit slow. Finally it left us at the Dharamshala bus stand. For the uninitiated, the main tourist attraction here is actually McLeod Ganj, which is situated slightly higher up. So, we took another bus from there and moved to McLedo Ganj which was around 8-10 kms away.

McLeod Ganj is one of those places in India where the typical desi does not “feel at home”, in a good way of course. The milieu is incredibly cosmopolitan and just like in Goa, the hotels, restaurants and their menus is tailor made to cater to the Occident. Compared to Goa it is even more so because even most of the business owners are of Tibetan origin. Most of the activities in the place are arranged around the central square. Most of the major hotels and restaurants are located in this area. After wandering around for a while, we checked in at the Kunga Guest House which turned out to be surprisingly cost effective. It was a nice room with wooden flooring and charged only INR 600 per day for a double bedroom. And yes, it had a nice restaurant. 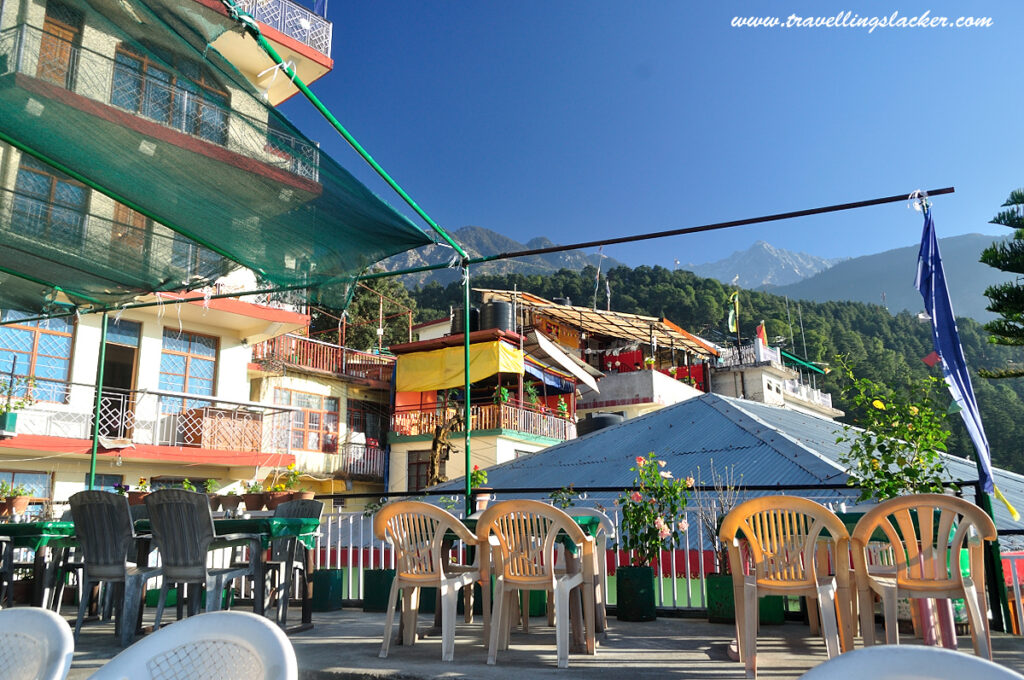 I have never been a so called “foodie” in my life. In fact I do not particularly like this word and generally look at those gluttonous people with mild contempt. But my companion this trip, Su Ko is from the other end of the spectrum and after a long and tiresome journey, I finally realized and appreciated his love for good food. While the rooms are pretty cheap, the food items are not so. Over the next couple of days, we figured out that almost all of them offer good continental dishes, designed to suit the needs of nirvana seeking western backpackers. I had read and fantasized about happy go lucky “hippies” out here but didn’t see too many of them or maybe they longer conform to the sartorial stereotypes.

In comparison, typical Indian food is either not present in the menus or were not very well made. You could find Earl Grey tea but the typical Indian milk tea was strangely bland. But anyways we didn’t mind. They also served Tibetan specialties such as momos, thukpa and Tibetan butter Tea and we spent most of the time eating and drinking. Apart from Kunga, we liked the food at McLlo Restaurant and the Mandala Coffee Shop.

Talking about Tibet and its ethno-political struggle is a bit tricky. You just cannot talk about one side without offending another. When I think of it, my earliest fascination with this community in exile started more than a decade ago when the Karmapa Lama escaped from Tibet and arrived here. He was of course not the first one and later I watched the other big story unfold in screen, when I rented a DVD of Martin Scorsese’s Kundun. 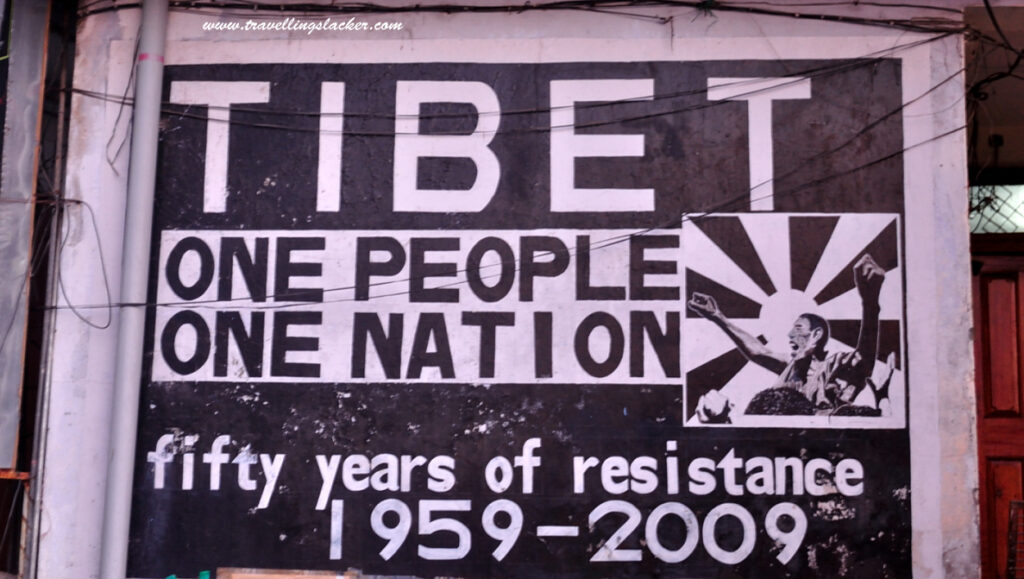 So, India has allotted this place to the Tibetans who still prefer to believe that Tibet is a free nation. So the Dalai Lama, Karmapa Lama and other major officials of the Tibetan government in Exile operate from here and try to advance the Tibetan Cause. For those who are wondering whatever happened to the Panchen Lama, nobody exactly knows!

After hanging around the town market, we slowly moved towards the Tsuglagkhang. This is the center of all Tibetan Buddhist activities out here. It was already evening and there was a big prayer meeting being organized. There were Buddhist monks as well as young school students. After the prayer a big pyre was lit along with the butter lamps. The gigantic statue of the Shakya Muni Buddha was especially awe inspiring and I also got a photograph of mine clicked with a clichéd pose rolling those “Dharmachakras”. After the prayer, we finally found a roadside tea stall that served road side Indian tea. 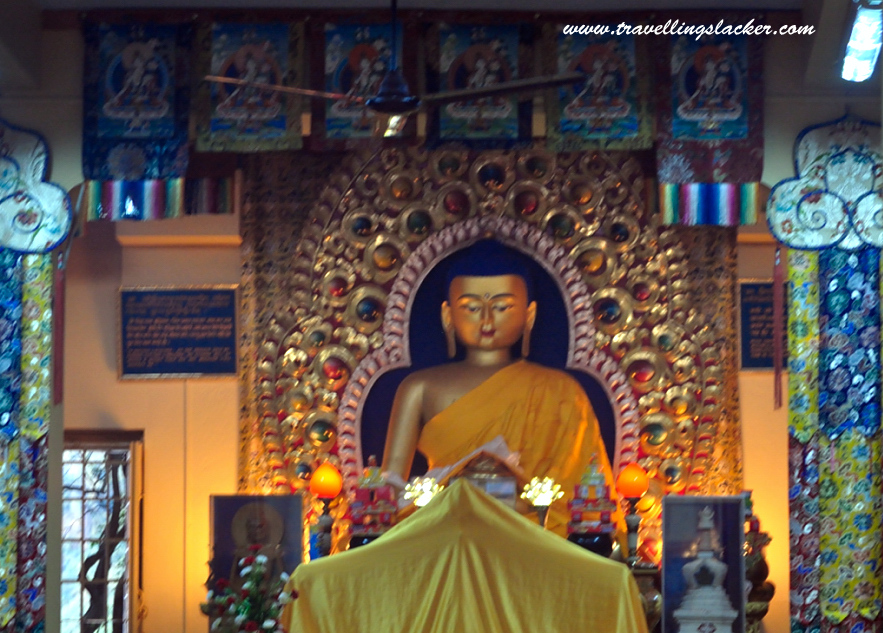 There are some other Tibetan attractions in Mcleod Ganj including the Tibetan Institute of Performing Arts and the Library of Tibetan Works and Archives but we spent most of our time eating and trekking. Now trekking is a long story and has a lot more photographs than I can cover in one post. So, I will deal with it in the next post.

The nearest major city to Dharamshala in the planes is Pathankot. But if you go to the Indian Railways website and look for tickets to Pathankot from Delhi or any other city, you may be disappointed. This is because most of the trains go to Chakki Bank and not to Pathankot. However there is no reason to be alarmed. It is a big junction built near Pathankot and the bus stand is also adjacent to the station. All you have to do is to type Chakki Bank (Station code CHKBHK) instead of Pathankot (Station Code PTK) at the IRCTC form.

It is also possible to reach Dhramashala on train. You can take the small hilly train through the picturesque Kangra valley. But it runs extremely slowly and if you are short on time it may not be a good idea. There is an airport at Ghaggal nearby but frequency of flights is suspect.

Budgets hotels ranging from INR 500 to INR 1000 are readily available in the McLeod Ganj area and most of them offer decent facilities.

The region offers pleasant weather. It is pretty cold in the winter but still not hostile and biting. And of course it is a good place to purchase woolens, jackets and shoes from the friendly Tibetans. 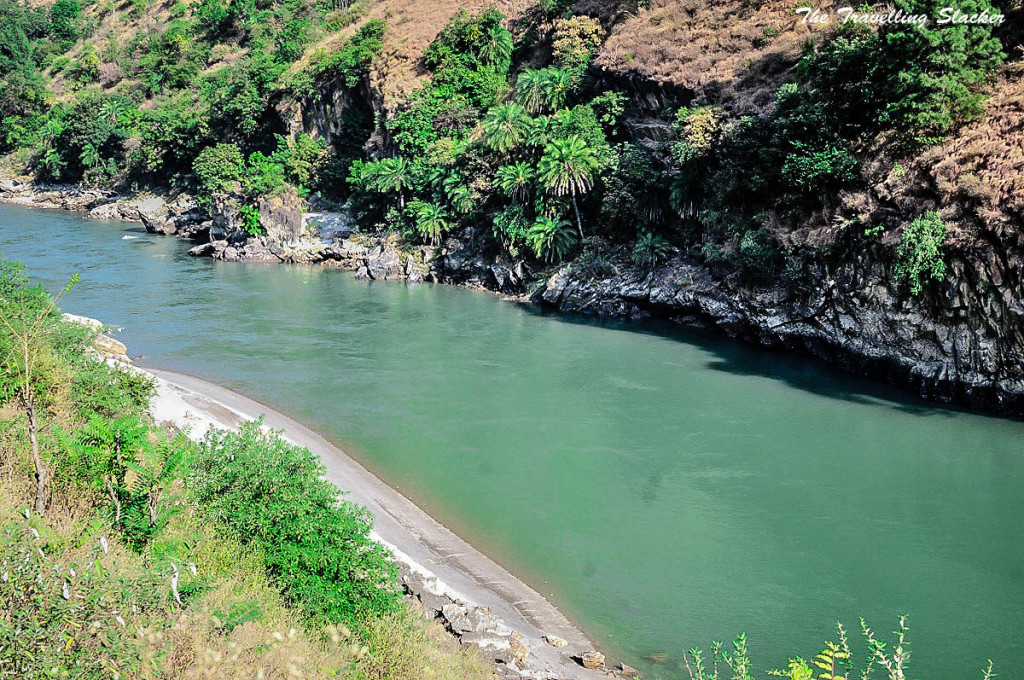 12 thoughts on “McLeod Ganj: Moksha through the Cardinal Sin”