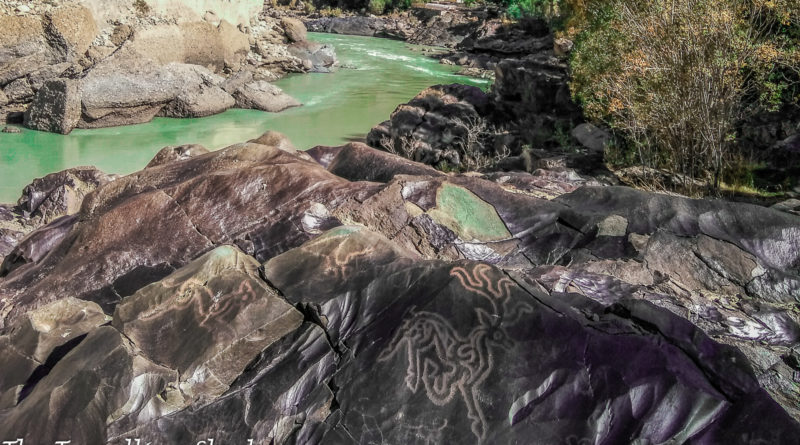 Brokpa Area Indian Himalayas Ladakh
2018/11/102018/11/30 Jitaditya Narzary 14 Comments Biama, Dah, Domkhar, Petroglyph, Rock Art
Prehistoric humans discovering and exercising their creative urge, a fledgeling species thinking beyond mere sustenance, or a community trying to immortalize their rapidly unfurling story, although in a crude format, no matter how you describe a piece of prehistoric art, it does not fail to fascinate you.
As I have already mentioned in my previous post about the Brokpa area, these are probably the oldest manmade work of any kind I had ever seen, equalling or predating those in Dholavira. As a matter of fact, this entire route is full of such prehistoric rock art clusters but Domkhar is the best preserved one and it is only fitting that it overlooks the Indus, the river that sired an entire civilization and lends its name to the country. This also is a good indication of the antiquity of the human settlements in their area. I once missed a good chance to visit the much more famous prehistoric rock paintings in the caves of Bhimbetka in MP and this one made up for that.
I did not have much clue about the prehistoric petroglyphs of Ladakh until recently. I did not have any clear idea even as I reached Leh this September. I only started getting interested in them when I decided to explore the Brokpa region and soon I realized that this Khaltse-Batalik route has the best concentration of such sites.
So, I left the homestay at Achinathang on a morning 8 AM bus. This was a small local bus that goes up to Khaltse. I got down at Domkhar, just in front of the signboard mentioning the sanctuary although it seems too early and the gate seemed to be locked.
Anyway, I found another path, going down towards the river bank and reached a spot full of seasonal flowers. I was beginning to wonder if I’d come to the right place as it seemed like a floriculture plot rather than an archaeological site. Nevertheless, one guy came out of the house and confirmed that I was in the right place. The village of Domkhar is also doing well in organic farming and that is what I was seeing all around. Anyway, the guy walked me to follow him. We took a narrower but well-maintained pathway lined with poplars from the plot and soon I noticed the first one not them, followed by the second one.
After that they kept appearing one by one till we almost descended to the bank of the river. These scenes were varied. There were scenes of people and animals, showing hunting and another day to day activities. Not everything could be identified or deciphered but the ibex hunting scenes were probably the most prominent ones. There was also a clearly identifiable horse at one place, which raised a few questions. There are some controversies regarding the horses in the subcontinent. The traditional view is that they are not native to India and arrived with Indo-Aryan settlers while the opposing anti-AIT group of people will beg to differ. The age of this piece of art may give them some ammo.
It is hard to know the exact age of these petroglyphs of Ladakh. Various sources quote various numbers from 2000 to 5000 years. So, It can be said that they are not all necessarily prehistoric and there is a continuity in this tradition that was sustained till the historical era. Also, some of them reportedly have Buddhist symbols, so they must have been done after the spread of Buddhism. However, the ones I spotted in Domkhar seemed genuinely pre-historic, especially the hunting scenes, and I personally never spotted any religious iconography.
I spent around 45 minutes admiring the rocks. I could have spent the whole day but the guy who was showing me around was getting a bit impatient. So, we walked back to the entry point and he directed me to a room, which was full of dried apricots. I thought now they will be charged the entry fee but surprisingly that was not the case (I had read in a different account that there was an entry fee). Instead, I met the family that I presume owns that plot including the petroglyphs. They offered tea and biscuits and then after that, I left. After that point, there was a long wait for the bus on the road for Dah-Bima but that is a different story.

A couple of days later, I had the opportunity to see a few more of these artefacts near Dah Village, precisely somewhere between Dah and Biama, by teh side of the road, on the banks of Indus again. Another such rock is now a part of the entry gate of an army camp in the same area. So, it is hard to click photos of that one. But here you can see one on the river bank, with Polo, the French guy I mentioned in the previous post.
Now, the ones near Dah are not that well preserved. Some of them have already been lost due to the river and also due to road construction activities. Also, people seem to be sculpting their names on the rocks (as they always do in India).
This is exactly where Domkhar becomes important. There are many such sites in Ladakh and more are being discovered. But Domkhar Rock Art Sanctuary seems more likely to survive while the rest are yearning for preservation.

Domkhar is around 120 KMs from Leh along the Khaltse-Batalik route. Catch the Dah-Bima bus from Leh bus stand at 8.30 AM in the morning and you should reach by noon.
Also Read: Brokpa Valley-A Complete Guide

Where to Stay in Domkhar?

I was told that it i spossible stay here but I could not see any place to stay in DOmkhar and nor was I planning to stay. The nearest places with definite stay options will be Khaltse and Achinathang on both sides. Otherwise, you can just take a detour enroute to Dah.

Where else to see rock art in Ladakh?

Apart from Domkhar, I have already mentioned the ones near Dah village. They have been reported around various parts of Ladakh and Zanskar but they may differ in style and antiquity. The ones along this so called Aryan Valley or Brokpa Valley seem to have their own distinctive style. Places like Khaltse, Nimmu, Likir, Alchi, Stakna, Karu, Upshi, and Tangste etc also reportedly have such sites but I will have to return next year to explore these.