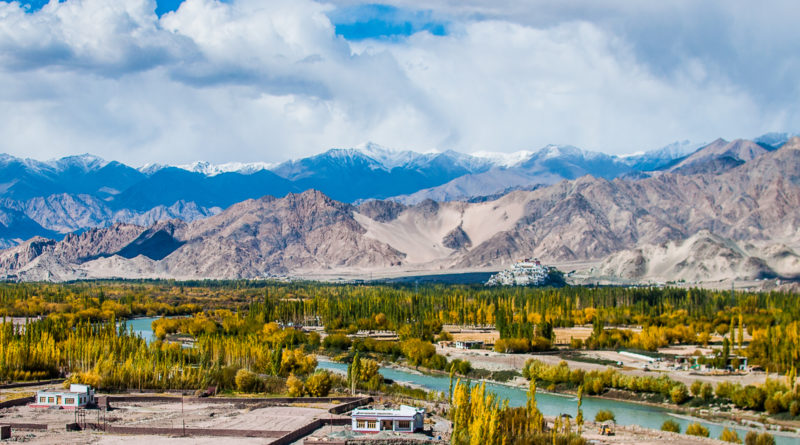 Best view of the Indus

After leaving Hemis Gompa, we started riding back towards Leh. We had already spotted Stakna while going towards Leh. This was a small detour of around 1 Km from the highway and the gompa can be seen from a distance. So, we took the detour and arrived at the Gompa, which is located prominently atop a hillock located in an otherwise flat patch.

To be honest, it is a much smaller gompa. It feels especially so because it is located between two of the most colossal gompas of Ladakh, Hemis, and Thiksey on the same route. Most people skip it and it did not even seem to have any entry formalities. However, it did seem to have an excellent setting. So, the best part is not what you see here but what you see “from” here. The hillock on the top of which it rests, rises out of nowhere from the ground, and from certain angles, you can get it in the same frame with the blue Indus. I think the best view we got of it was a couple of KMs before reaching, from the highway itself. Unfortunately we were in a hurry and had a lot more to cover for the day and so could not stop at the right point for that classic Stakna frame.

Apparently, Stakna means “Tiger’s Nose” because it is shaped like so. To be honest, I could not see that resemblance but it does sound great. As we parked the bike and started climbing up the stairs, the primary benefit of visiting this monastery became apparent. It is practically one of the rare highest points right next to the Indus and the Leh Manali Highway, offering a clean panoramic view. There is nothing I can say to justify those views. Just have a look at the pictures. You can see the Thiksey monastery at a distance, beyond the river.

Coming to the monastery itself, a couple of intriguing facts came up during my online research. Firstly, it was found in the 16th century by a Bhutanese scholar and saint called Chosje Jamyang Palkar. The Bhutanese connection was somewhat surprising for me, considering how far that land is from here. It is the only Bhutanese Drukpa Kagyu monastery in Ladakh, under control of the Je Khenpo (the senior religious authority in Bhutan). Other Drukpa (Red Hat) gompas in Ladakh are under Gyalwang Drukpa’s school in Hemis. This split occurred sometime in the 17th century when they had some dispute and go divided into sub-sects.

However, at the same time, I think I should not be too surprised. Last year, some people in Spiti also told me of significant Bhutanese presence in Kaza. I think the monks in Bhutan are good at venturing out and it only shows how well connected and organized the Tibetan world is, in spite of all the political turmoil they have had to go through.

Another thing that is mentioned in many websites is the the sacred Arya Avalokitesvara statue from Kamrup (Assam), which is the central idol inside the monastery. Now, there was no one at the time of my visit and I could not really figure out much about it. Most of the websites repeat it from one source and so, none of them have any other explanation or details. Buddhism was not really a dominant religion in Kamrup during the middle ages. So, I was surprised to find the mention of Kamrup. However, Kamrup borders Bhutan, so, there may be something too.

The inner courtyard was mostly wooden and compared to the other monasteries I have mentioned before, it was a tiny one. The walls had the usual Buddhist imagery painted all over. The predominat colour seemed to be red (because it is a red hat gompa?). There is a big stupa also noteworthy are the art work on the mani stones, which is not suprising considering the affinity of Ladakhis towards rock arts since the prehistoric times.

So, it was more or less done in 15 minutes but Stakna had already given me some of the best images of the day. Satisfied, we moved on towards the next one, which is also visible in some of the images above.

One thought on “Stakna Monastery: View from the Tiger’s Nose”