Years ago, when I started to plan for Pangi Valley, I came across the names, Hillu Twan, a set of remote twin villages beyond Saichu Valley. I came across some interesting anecdotes about it at various places but details were minimal and I could never even find a photograph of them.

Pangi Valley itself is among the least explored regions in Himachal and Hillu Twan, along with Parmar Bhatori and Chasak Bhatori are the remotest compared to the more easily accessible Hudan and Sural.

So, this time when I entered Pangi after an unwanted gap of four years, I was determined to cover these areas. However, it was easier said than done. Although we talked to the locals and collected information from locals at Sural and Hudan, many practical problems kept persisting. We were told that there’s a homestay in Chasak Bhatori, but it requires a hike to get to that village. The motorable points did not seem to have any options to stay on that route.

On top of that, everyone had different opinions about the length of that hike. As per some, it was easy, while some others opined that we won’t be able to get there before dark. Eventually, we decided to give up on Chasak Bhatori and decided to focus on Hillu Twan.

So, from Hudan, we came down to Killar in the morning and quickly reached the highway. After around an hour, we reached the diversion towards Saichu (another detour goes towards Parmar from one point). Now, this was completely new territory for me.

We gradually started moving up. As I mentioned in the earlier post, I was in a hired car for a change, along with two others. Even the driver was coming to Pangi for the first time and he was reluctant or hesitant for most of the journey. Nevertheless, buses are there from Killar just if you want to know.

The road to Saichu started gradually, crossing villages like Hillor and Sahli. I’m sure there’s more to explore in these villages but for the time being, we had to quickly move on. We met the diversion to Parmar too although that’s another thing we had to give up on. Finally, we reached Saichu, which is a small village on the bank of the Saichu Nallah, with a school and a few scattered houses and a negligible number of shops. It has a pretty setting but several routes going further from here. Tourism hasn’t really begun here but I think places like Gushaini or Sainj must have felt like this 10-15 years ago.

We soon learned that there is an FRH where we could stay but it was higher up the hill and required a mini hike. It was afternoon already and we were planning to return the next day. One road from here was going towards Hillu Twan while the other was going towards Chasak and we were not sure about finding accommodation anywhere.

With so much confusion, we decided to move on towards Chasak. It was an uphill drive through a not so smooth road and we got to Chasak in around 25 mins. The village seemed nice but the weather was deteriorating and a light drizzle started. We noticed a temple too but with the rain and cold, it was getting increasingly difficult to last. We talked to a few locals and everyone reiterated only one thing. There’s no option in that village to stay. There’s a homestay in Chasak Bhatori, which is a tough hike from there and we won’t get there before dark anyway and on top of that, we won’t probably survive in this weather.

We reluctantly returned to Saichu and the driver was adamant that he won’t come back this way the next day. So, we decided to stay at Saichu and visit Hillu-Twan the next day. The FRH at Saichu is located higher atop a coniferous hillock. It’s actually a reasonable hike from the road and can be a challenge if someone is not used to hiking.

It took some effort with all our luggage and tiredness, but the setting was as expected from a govt owned property. It overlooked the valley and in fact, it was an excellent sunset point with looking peaks on the horizon although the weather was not optimal for that. A nice temple, built in typical Pangwali style, was also located nearby. When climbing up the stairs, you first come across the temple, followed by the FRH, which is somewhat hidden by the trees and is not easily visible from the road.

As expected of government property in a remote location, the arrangements were not fully professional. There were rooms and they were decent and cheap, but no food was available. In most places, that’s not an issue but at Saichu we did not even spot any restaurant. Nevertheless, the caretaker assured us that there is at least one.

The sun reappeared only when we came down again looking for food, and found a small shack selling chowmein and momos (somehow these things have become universal!). We spent the rest of the evening strolling around Siachu Nallah.

The next morning we quickly checked out and drove to Hillu after breakfast at the same shack. Unlike Chasak, Hillu is located almost at the same elevation and so it was a straight road and we reached the village quickly.

Hillu and Twan are Buddhist villages just a couple of kilometers away from each other. The motorable roads now connect till Hillu while the road to Twan is still being built. There is another small village in between.

Hillu seemed a small village surviving on agriculture, especially beans, potatoes & peas, if we have to go by a signboard set up by the Agriculture Department. We left the car at Hillu and started walking towards Twan along the river. 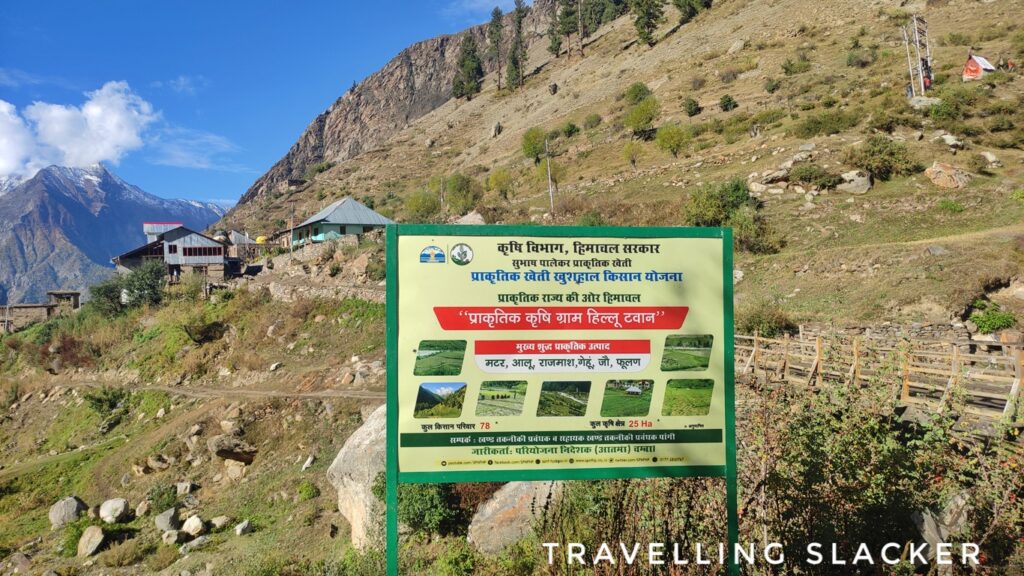 As mentioned already, it is a somewhat lower area with thicker vegetation. The orgasmic autumn that we witnessed at Sural Bhatori was not visible here, or maybe it happens a few weeks later. We were quickly accompanied by a local kid Palden, who gave us more information than anything we’d ever read. He confirmed that there is a monastery, and also ran ahead of us to find the person who had the keys to the monastery.

As it turned out, there were actually two small monasteries, both located together. The new one has been built recently while the old one was a few decades old but to me, it looked positively medieval. The locks were opened for both and we visited the interiors, which were the same as all monasteries in this region.

The gompas are located just at the entrance of the village and most of the village houses are located beyond them. Exploring a bit more would have been worthwhile but we had to return to Lahaul the same day and the driver was waiting in Hillu. So, we gave up on that idea and started returning.

While walking back, we met another local guy, who was exactly the kind of person we should have met earlier. He used to work in some resort in Goa and wants to see more visitors in his village. He also told us that although officially there is no homestay, people have stayed at his house. He also conducts treks to some peaks beyond his village. Many passes from Saichu Valley are there that one can cross to reach Miyar Valley. Maybe next time… or maybe not… let’s not jinx it.

So, this is more or less about Hillu Twan. More explorations are reuired here, it was a hurried visit with disappointing photographs. But I am glad to have simply reached this area.