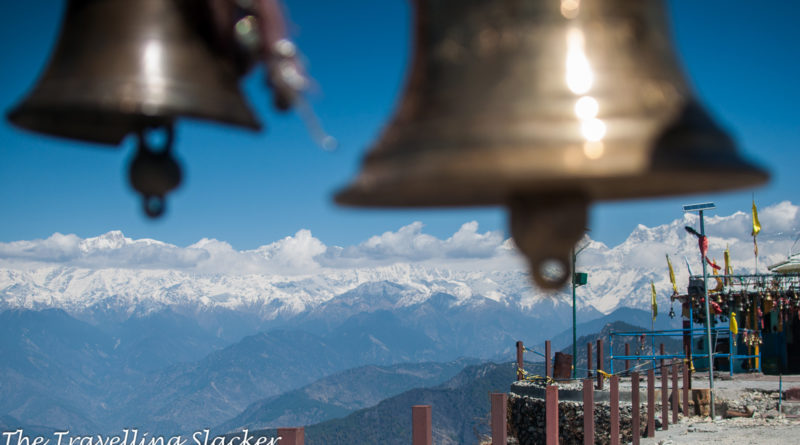 Garhwal Indian Himalayas Uttarakhand
2018/07/012018/07/01 Jitaditya Narzary 11 Comments "Rudraprayag", "Uttarakhand", Chopta, Garhwal, Kanakchauri, Kartik Swami Temple, Kartik Swami Trek
Kartik Swami is a small day trek not far from Chopta. That is all I knew about it until recently and was not very sure about the route to the place. After the pleasant snow and rhododendron surprise at Chopta, I set out for Kartik Swami along with Travelshoebum, who had done some research and seemed to know the route at least. Before that, of course, we had a detour to Sari and Deoriatal. I did not want to visit it again but he was keen on visiting it.

After some time at Deoriatal, we came down to Sari and then to the main road to Chopta, got lift in a tourist vehicle with some people from Bangalore, to a point called Banswara. The route was problematic after that. It was already evening and no public transport was likely to arrive at that point. There was a basic hotel at that point and I was prepared to stay there at night and try next morning. However, Travelshoebum kept trying and finally talked one local person called Jagdish into giving us lift and then, and he even invited us to his home for the night!

So, that night we stayed at Jagdish’s place. His village was actually a long way beyond the point where we had to take a turn for the temple. The road was horrible after that point and we reached at around 9 pm. We had no clue where we were and wondered if we should just have stayed at that hotel in the earlier point. But eventually it turned out to be a good experience with his family and they were generous with the food.
The next morning, after some discussion, he also agreed to drop us at the trekking point because the public transport was scarce and was going to waste a lot of time. We agreed to pay him a little something for the fuel cost for this extra round and yet again we were going through uncharted territories. I have said it before but I need to say it again, the popular pilgrim routes of Garhwal have been commercialized excessively and they don’t even have the hippie vibes of Himachal. You either need to go higher, or take these offbeat routes to experience true Garhwal.
Anyway, we were at the starting point of the trek at Kanakchauri by 9.30 AM. We bad adieu to Jagdishji, we will probably never meet again but he saved this phase of the trip. The majestic peaks were already visible even from that point, beyond the few small shops selling pooja items. Since it was spring, they were also selling rhododendron juice that rejuvenated tired legs and we started the hike.

It was a bright sunny day with no haze and the peaks at a distance were clearly visible. I felt that a slightly cloudy sky could make it look more dramatic but you can’t always be lucky. The trek is around 3 KMs long and is one of the easier treks I have ever done. Although the trail passes through a jungle stretch, the temple is always visible in the horizon and the jungle mostly consists of non-threatening rhododendrons. I’d had an overdose of rhododendrons in Chopta and so these comparatively sparse flowering did not rerally impress me.
We moved in quick speed and after 1.5 Hours, we were almost there, at the lower base of the temple, where the priest lives. The information plaque set up by Tourism Department here recounts the story of Kartikeya. For those who are not familiar, Kartikeya is the elder son of Shiva & Parvati. In many traditions he is represented as a warrior god, who rides a peacock, thus making him cooler than most. Since this area is full of major Shiva Shrines, the “Panch Kedars“, it is not surprising that his son also has a separate temple, along with a hilltop for himself.
There is a small Shiva Temple at the base and then there is one last flight of stairs, that finally takes you to the Kartik Swami Temple. The original relic inside the temple is believed to be a naturally formed image of the god on a marble-like stone. There are other statues and wall paintings depicting Kartik as well as his peacock. I was expecting more ancient relics but could not really locate them.
Nevertheless, the primary draw of this temple has always been the views rather than the archaeological remains. Now we were at the top of the 3000-metre hill and getting 360 degree views of the much higher peaks on the horizon. From Chaukhamba to Bandarpunch and from Neelkanth to Trishul, there are scores of speaks visible from here although don’t ask me which one is which. I have never been very good at identifying peaks.
Beyond the temple, there is a deep gorge on the other side, covered with dense forests. I looked down from the edge, but my views was blocked by another rhododendron tree. Anyway, we had seen enough by then and we started the return, which took another hour. I bought a bottle of buransh (rhododendron) juice and the bus to Rudraprayag had arrived too.

As you can see from the map, Kartik Swami is located on a slightly different route from Chopta to Rudraprayag, but not too far away. It is basically a temple on a hill top, dedicated to Kartik, the son of Shiva. A short 3 KM hike starts from a place called Kanakchauri, 40 KMs from Rudraprayag.

Apart from the temple, you can get an excellent view of many peaks from here on a clear day. You can 360-degree unobstructed views from the top and even at the starting point, the peaks are visible. The whole stretch is covered with rhododendrons that turn the forest red in the spring.

We just did the trek and came out to Rudraprayag without staying. There is an expensive-ish accommodation at Kanakchauri as per my knowledge that costs INR 1500-2500 per room, which was way beyond my budget. However, one can also stay near the temple, where the priest stays. You need to build a rapport with the priest for this. Also, there is a Forest Rest House at nearby Mohankhal (see map). Otherwise juat make a day trip from Rudraprayag, which is a big town with many options.

If you need a complete guide on all the major treks in the Chopta-Tungnath area, read my complete Chopta Travel Guide.