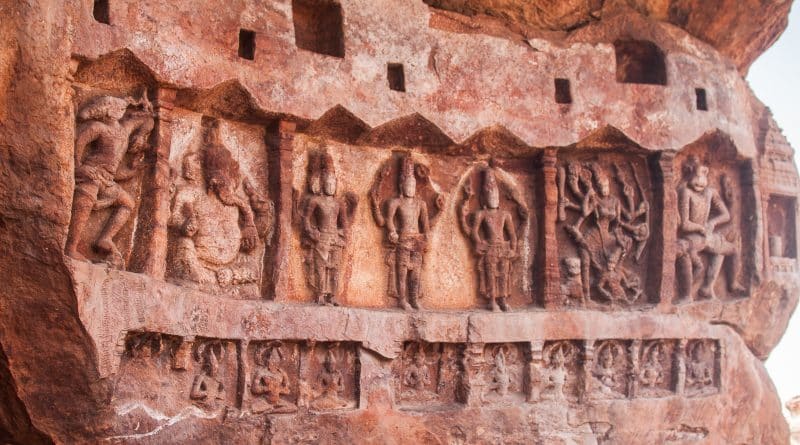 I remember a small portion of Chalukyas in one of my school books. This was a bit of an additional section on Indian history that was skipped even by the teacher and nobody was bothered about that. Nevertheless, I have enjoyed reading that part and while the details were limited, I remember that at some point the Chalukyas got divided into two branches, namely Vatapi and Vengi. Vatapi is what we now know as Badami, the point of origin of the Chalukya dynasty. This is something I had been wanting to visit for ages, but somehow I could never make it… until recently. So, this is a huge circuit with several major centers ad I have already described other parts like Mahakuta, Aihole, and Pattadakal. Now, let us discuss have a look at Badami.

We reached Badami early in the morning on an overnight train from Bangalore and soon realized that the train station is a bit far away from the main town. Nevertheless, we soon found an autorickshaw that was already full of local people but the driver, who spoke in chaste Urdu, seemed interested in the tourists. He dropped most of the locals in the town and drove a bit further with us to the KSTDC hotel. He gave us his number and the next day we used his services to visit Pattadakal and Aihole (I have already written separate posts about them). He seemed to have a penchant for poetry and called himself “Mehboob” although TrueCaller showed a different name. Anyway, we asked him to come the next morning as we did not need his services for roaming around the small town.

It was still pretty early but the rooms were empty at the hotel and the manager allowed us in.   After a bit of rest and breakfast, we set out to explore Badami. It was around 10 am and it was already insanely hot. Just to make it clear for those who are not familiar and the place, Badami is a reasonably big town. It used to be a major settlement in ancient times too and those ruins are scattered in and around the town, with the most important ones being located on the rocky hillocks surrounding the town.

We weren’t sure how to start. So, I saw a museum on the map and started walking towards that. Unlike neighbouring Hampi, it seems to lack that carefree vibe and tourism has not really taken off in that manner although it is one of the most important heritage circuits in India. Apart from the heat, the squalid nature of the town was also disturbing. I don’t know how a place as important as this lacks basic maintenance and even the locals seem to be content with the status quo. Is all the tourism budget reserved for the Golden Triangle or what?

Anyway, we crossed the crowded market place and took a small alley and walked for 15-20 minutes leaving behind the cluster of residential areas and finally reached the foothills, where the museum seemed to have been carved out of the hillock. This area is so hot and dry that the only ornamental plant in the front yard seemed to be the cacti. Anyway, we went in after getting the tickets. As usual, photography was not allowed inside. There were a few interesting artifacts, especially one life-size Lajja Gauri statue, that I wish I could click.

The museum was informative and we realized that there is a lot to see atop that hill that shelters this museum, while the famous caves are located on a different hill. We quickly found the rock-cut stairs going upwards and started hiking up. This hill doubled up as a fort too while there are a couple of Shiva temples too. So, the stairs did feel more like a fort rather than a shrine. There are the remains of two Shiva Temples (Shivalayas) here, called lower and upper Shivalaya based on their location. There were a few other curious structures too. One of them looked like those shady coves of Beatles Ashram, minus the graffiti of course. As we reached the top, I could understand why this hill was chosen. It is the highest point that offers a commanding view of the whole town and beyond. All other parts of the town could be seen along with the hillock. It would have been difficult to conquer this fort and a cannon could still be seen here. While the Chalukyan era predates the gunpowder age, I guess the position was later used by one of the Bahmani kingdoms in the middle ages.

After the northern hill, we quickly moved towards the Bhootnath Temple (Bhutanatha Temple), located beyond the Agastya Lake, which is more of a tank. This is one of the older temples here, dating back to 5th century.  Actually, this was also a separate cluster of temples and as of now, two major structures are remaining, including Bhootnath Temple and the nearby Mallikarjuna Temple. Bhootnath is a manifestation of Shiva, so, this is also a Shiva temple of sorts.

The most iconic photographs of the Bhootnath Temple show it framed with its own reflection on the Gaatha Tank, with a waterfall falling from the hillock behind it. Sadly, this view can be had only in the monsoons. We were there at the worst possible time. The lake itself had almost dried up, especially the part near the temple. The waterfall also had disappeared in the winter and it was going to reappear only in June after the arrival of the monsoon. So, I just had some disappointing photographs. However, behind the temple, I discovered delightful dasavatara sculptures on the face of the hillocks. I wish I had a good wide-angle lens at that point. Many important inscriptions have also been found in his area although I could never locate them. 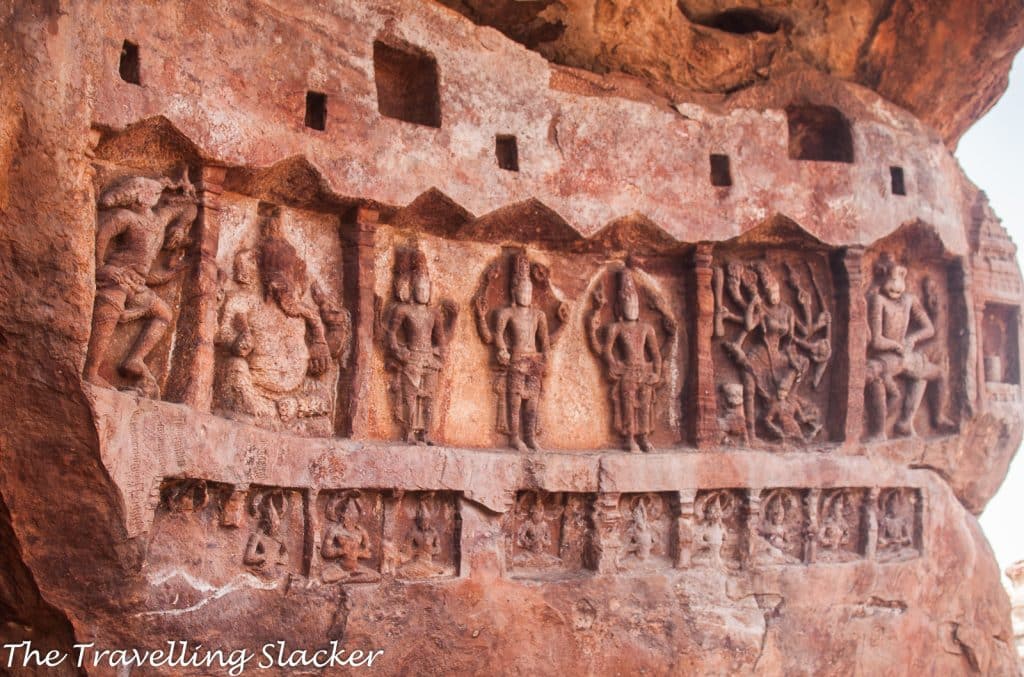 After that, it was time to do the final part of the town, the iconic Badami caves. These rock-cut caves can remind you of the likes of Ellora and Ajanta. Although, they are only four in number compared to 30 odd in Ellora. They were carved out of another cliff, located on the southern side of the Agastya Tank. After a bit of inquiry, we found a small alley going towards the caves. It was around 1 pm and we also needed lunch. But the only shop available nearby was a very austere shop offering sambar rice that we had to consume as there was no other option.

Coming back to the Badami Cave Temples, they are actually more famous than the other parts we just visited. Already a lot of tourists were there in spite of the oppressive heat. A lot of people on short day trips only visit these caves and skip the rest of the town. These caves are numbered in ascending order. You first reach Cave No. 1 and then keep hiking up the hill. The first three are Hindu Caves while the last one is a Jain Cave, full with the images of Tirthankaras. As is normally the case with such major constructions, these ones must have been built over several centuries by different patrons. They are generally dated between the 6th and 8th centuries. I can describe the sculptures but I think the words can’t do justice to them and it is better to see yourself.

So, this was more or less it. For complete information,  also read the previous posts.