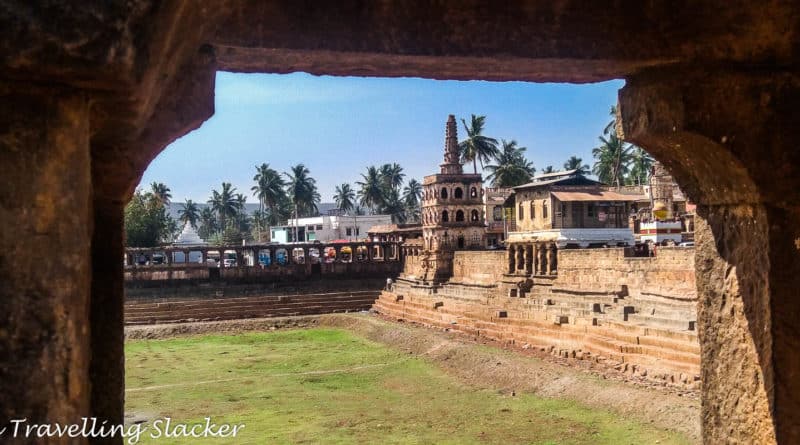 In the tourism circuit of Karnataka, Badami (Vatapi) is often named in the same breath with the more famous and touristy Hampi. But make no mistake, Badami is a completely sedate and nontouristy town compared to Hampi. More importantly, it is not limited to one town but the circuit covers a few other major sites in the 30km radius. I travelled to Hampi way back in 2011, but had failed to make any inroads in Karnataka since then. But finally, even through it was not the right season with the blazing sun and dry air in March, I managed to visit this circuit last week. Detailed travelogues about them will take a bit of time but I want to quickly sort out the guide as a lot of people are asking for it.

As you might have known already, the archaeological remains of Badami were built by the Chalukya Dynasty between 6th to 8th century. This area is very close to Maharasthtar border and even culturally, you can sense it as you roam around the area. In order to understand your routes, have a look at the map above. It is not completely accurate or up to scale but it will help you understand the route. Badami is the main town here that you will reach first. The Badami Caves and other monuments are located within the town. From here people visit Pattadakal (21 KMs) and Aihole (35 KMs), both significant sites on their own. As you can see, there are two routes to cover these. The direct route will help you cover only these two attractions. However, if you take the longer route, you will cover a few more lesser known monuments such as Banashankari and Mahakuta.

So, the primary town here is Badami, which is a small, squalid town that does not seem very appealing at first glance. However, the town itself houses several major archaeological sites mentioned below. It has a few hotels and restaurants and small enough to simply walk around.

It is a big lake in the middle of the densely populated old town. It is surrounded by the rugged hillocks where other attractions are located. The best views of the lakes are from the top of the hills. You need to be in the monsoon to see the lake it is full size. There are steps made to climb down to the bottom of the lake.

The museum is located just at the base of the Northern Hills, near the Agastya Lake, and staring at the Badami Caves on the other side of the lake. There is a minimal entry fee of INR 5 but photography is not allowed. This is a good place to start because it gives you an immediate primer into the history of the area.

Fort & Temples of the Northern Hill

Just beyond the Museum, there is a staircase that takes you to the top of the hills. This served as a fort at one point of time and there are also a couple of important temples with excellent stone carvings. You can get excellent views of the town as well as the lake from here.

This is a group of temples on the eastern bank of the Agastya Lake. In the rainy season, when the lake is full, the temple looks like half-submerged in water. On top of that, a waterfall comes alive in the hills behind it. Sadly, I visited in the dry month of March, so there was no waterfall and even the the Lake was half empty. Nevertheless, the temples are worth visiting for their sculptures and only 5 minutes walk from the Museum. Also, there are some caves with more sculptures behind the temples.

Badami Caves are the most famous attractions here. It has four rock-cut caves, each located higher up than the other. Each cave has numerous exquisite sculptures on the walls. The fourth one is a Jain Cavewhile the rest are Hindu Caves. They are located on the other side of the lake, on the southern hill. There is an entry fee of INR 25 for Indians if I remember correctly. These caves are comparable to those of Ellora in terms of setting although smaller in scale.

Banashankari Temple is also an ancient shrine around 5 KMs away from Badami. It is a live temple still in use, so, modern structures have been mixed up with archaeological structures and difficult to distinguish. There is a big stepped tank in front, just like the Agastya tank but there was practically no water here when I visited. It is located in the middle of a busy market place, or may be the market exists because of the temple. It organizes a major “Rath Yatra” with a gigantic chariot fo rthe deity every year. The primary deity here is known as Shakhambari, an incarnation of parvati. The most noticeable structure here is the so called “Guard Tower”, with a strange shape.

It did not seem like a historical site when we visited. It is around 7 Kms ahead of Banashankari. It was not a part of the plan but it is in the route and the auto-driver took us there. But the primary attraction here is another one of those larget than life chariots that is used for processions once in a year. He told me that it is the second largets chariot in Karnataka at 65 feet. I don’t know how accurate is that bit of information and which is the largest one.

The Mahakuta Group of Temples were a pleasant suprise for me. It is another few KMs ahead of  Shivayoga, on the connecting road towards Pattadakal. It is as big as Aihole with several temples within but I had never heard of it before. This is a live temple and this may be the reason it is not included in the usual archaeologicla route. The temples are built surrounding a small pond, which still had water for a change. The locals were swimming and enjoying there. All the temples expectedly have excellent sculptures but the maintenance probably can be better.

Pattadakal or Pattadakalu is an UNESCO World Heritage Site 4KMs. Naturally, it is the best maintained of the lot, set amidst a well-manicured garden. There are several 7th and 8th century Hindu and Jain Temples here. If you want to study each and every temple, you will have to spend several days here! There is an entry fee to enter the premises.

Finally, Aihole is the final group of temples, that apparently thrived between 4th to 12th centuries, around 35 KMs from Badami. The best-known structure is the so-called “Durga Temple”, which is known for its unique apsidal structure. There is also a museum here with more useful information on the site. Aihole is actually a huge cluster and there are scores of other structures scattered all over the area. But you will need more time to explore all of them.

How to Reach Badami?

The best way to reach Badami is to get a ticket at the Gol Gumbaz Express. The train runs every day between Mysore in Karnataka to Solapur in Maharashtra, passing through Bangalore and Bijapur. It leaves Bangalore station at 6:50 pm and reaches next morning at around 7 am. The railway station is located ages KM’s outside the town. You will find shared autorickshaws and buses from there to reach the town. On shared autos, it cost 10 to reach the town. You may have to pay 20 if you want to reach the KSTDC hotel which is on the other side of the town. Alternatively, you can find night buses from Bangalore bus as you wish preferences. I always go for the train. Also, it is around 150 KMs from Hampi, the other major tourist hub in the region. You can find buses to and from Hampi too. The bus stand is located within the town.

As I have mentioned already, this town does not really have that touristy vibe and your options are limited. The best-known option here is the state-owned KSTDC Mayura Chalukya. Apart from that, there are a few other hotels in town and a new fancy resort or two just outside the town. I also stayed at the KSTDC one. We were two people and we shared the room cost of 800 between the two. I generally never book hotels but in this case, I did because everything seemed to be above 1000 on weekends and we got a discount deal here. However, if you have the time and patience, you can always ask around the makret for cheaper guesthouses with basic facilities.

You can just walk around the town and cover all the major attractions on foot like I did. However, it does get tiresome under the blazing sun as I was there in the wrong season. For visiting other spots, like Aihole & Pattadakal, there are multiple options.

Winter and monsoon months are the most convenient for this region. This is an arid region with a punishing summer, and the summer starts as early as March. It was difficult for me too but anyway I had to do it. But if you are planning beforehand, I would suggest you to visit during the rainy season because that is when the heat will subside, the lakes will be full, and a waterfall or two will also come alive.

The region is well-connected now and I had no problems with internet or phone connectivity at any of these spots.

Even the KSTDC Hotel has a restaurant that sells beer. I saw another hotel with a bar in town. Even locals visit them.