Trekking has always been one of those activities that my non-pathetic alter ego has yearned for. But rarely does it get an opportunity to indulge in the same. The regular readers will be aware of the first-ever trek of any value or consequence done for this blog, the Valley of Flowers.

After more than two years, I was again back in the Himalayas and as I’d mentioned in the previous post, McLeod Ganj spoiled us with food. So, to overcome the socialist guilt of excessive consumption, I decided to undertake the Triund Trek the next day along with Su Ko who has always been a bigger sinner of gluttony.

We did have a bigger than usual breakfast at the hotel in McLeod Ganj but I think it was fair because we were going to have a tough time. We first moved from McLeod Ganj to Dharamkot by hiring an auto rickshaw. It is a smaller settlement barely a couple of KMs away and it is better to take some vehicle to this point to save time. At this point, the real trek starts and it is 7KMs from here to the peak of Triund, a distance I rarely walk at one go even on the plains.

The first few yards of the trek are not that difficult. The ambiance was not lush green like the monsoons but had a more demure green look with occasional reddish hues of the autumn. The moon was visible even in the broad daylight due to the clear and unpolluted sky. We occasionally came across other trekkers, small settlements and mini caravans of the locals with solitary donkeys. 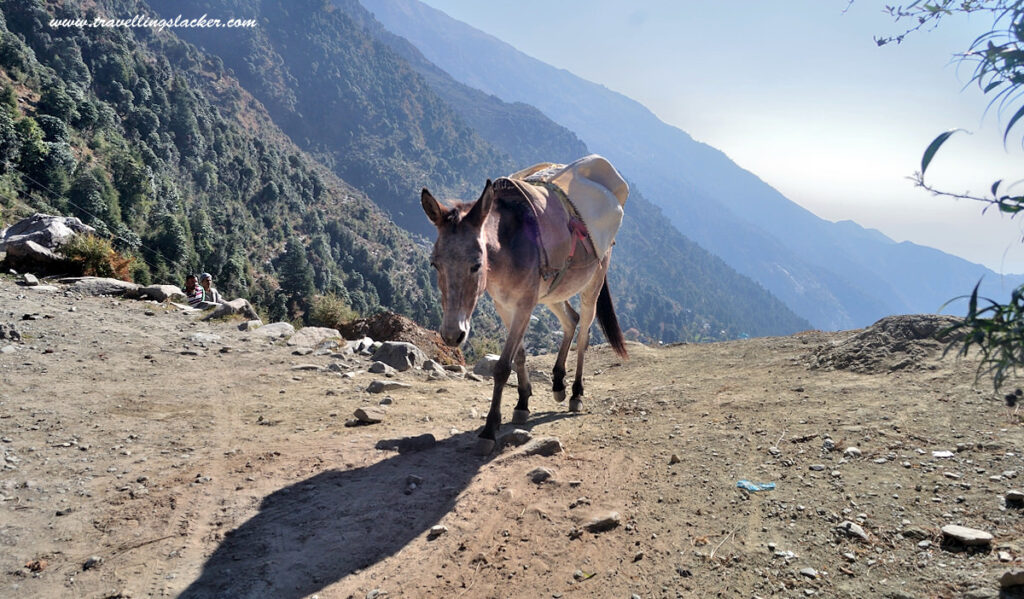 One particular view was especially attracted my attention. It was a small plot of terrace cultivation that could be seen from a distance. There was also a steep trail leading towards it and there was also a small hut and I wondered how great it would be to live such a secluded existence. As we moved on, that particular plot kept becoming clearer and after a couple of tiring hours, I suddenly noticed that we’ve reached a higher spot than the plot in question. 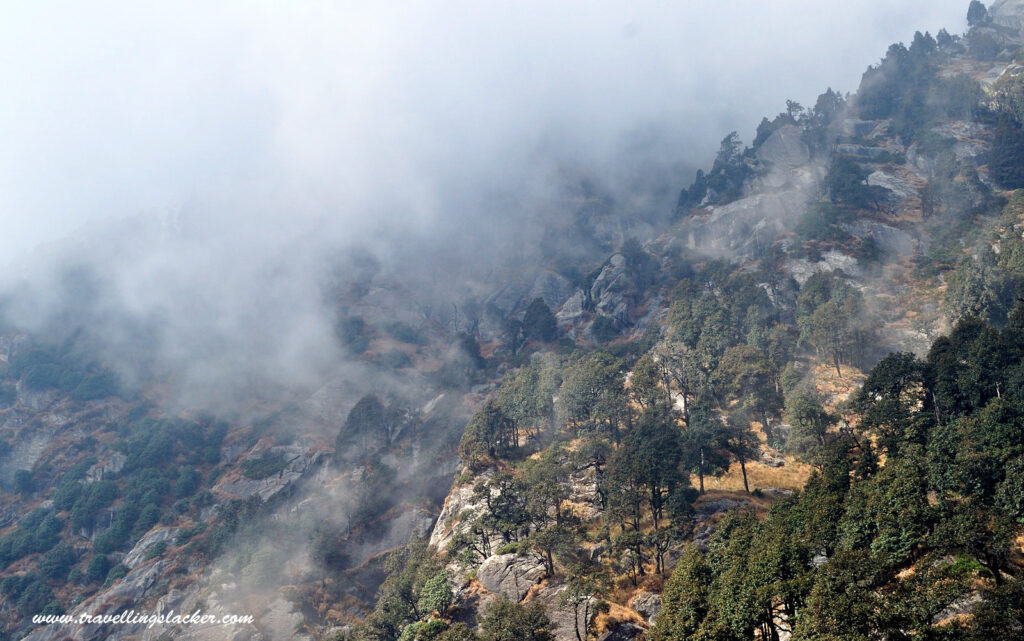 The progress was slow and tedious. Years of lethargic urban lifestyle was showing its colours. The sun was warm but the shades were chilly and the lone water bottle was quickly getting empty. But with every turn the Dhauladhars became clearer with vibrant fall colours. 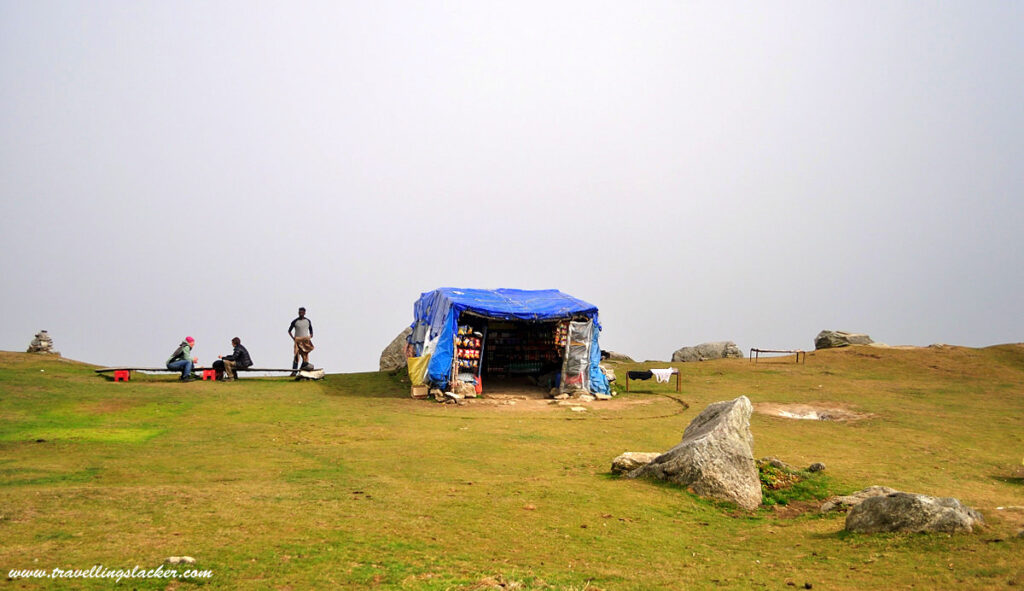 From Triund it is possible to move higher up to certain other locations and in fact it is one of the ancient routes connecting Kangra with Chamba. But the popular day trek for dummies is supposed to end here itself. We were tired, famished and sleepy. We asked one of the shopkeepers if we can get anything to eat, he offered us Maggi and Gatorade and we eagerly lapped up this triumph of globalization. We waited for an hour but the fog refused to go away and so the pseudo aerial shots that I fantasized about were never possible. 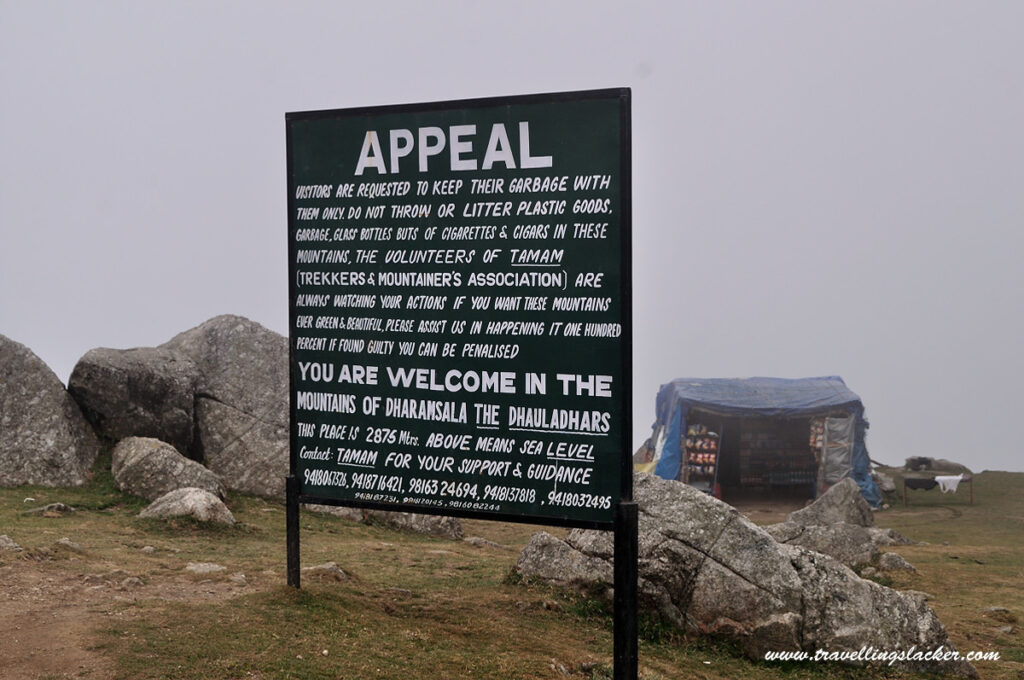 While coming down I suddenly saw a goat. After a few steps, I saw a couple more and finally I noticed an entire herd of mountain goats. I always knew that the goats are capable of good balancing acts. The first-ever circus I ever visited during my childhood had a goat walking on wire. But it was impressive seeing so many of them swarming the steep mountain and soon I realized that they were not alone. There was a shepherd guiding them but we only heard his voice. But we did see a shepherd dog keeping a close eye on them. I must confess that this was the most stately dog I have even seen in my life. 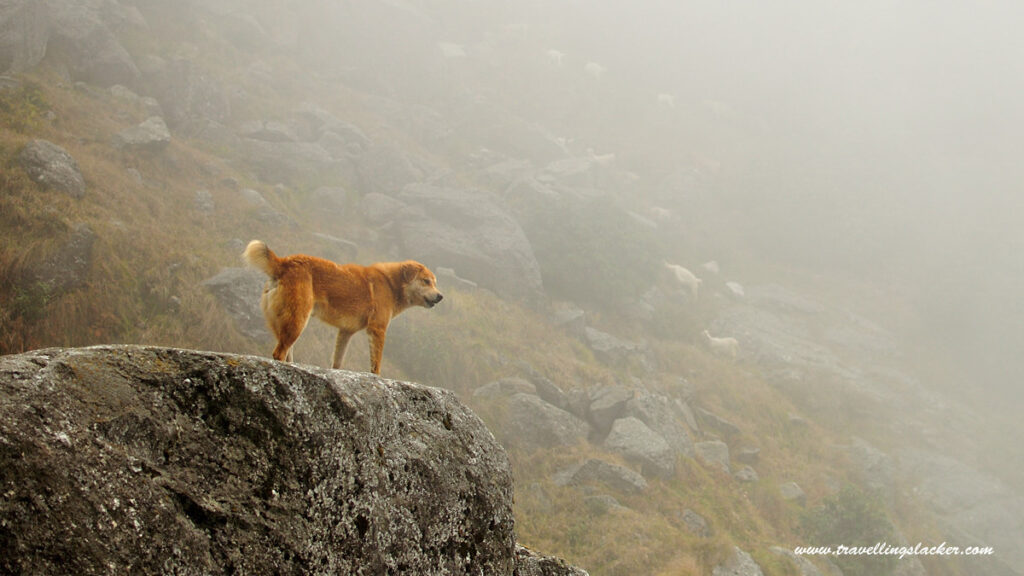 While coming back, we stopped for tea at the midpoint. There was a small house cum shop and also a small temple. There we found a lonely British guy who called himself Garry. Apparently, he has been coming to India for almost a couple of decades. He works for a few months, saves money and rushes to India. And he was planning to spend that night at that shack in the midst of nowhere. This is how the mountains seduce people! Anyways, the last leg of the trek was eventless and I just got a few photographs clicked with silly poses to be used as display pics in various social media profiles.

Where exactly is the Triund Trek Located?

Triund is a popular day trek near McLeodganj (Dharamshala). However, serious trekkers can also go beyond Triund Top to Indrahar Pass and then cross over to Chamba District.

How long is the Trek?

Triund is around 9 kms from McLeod Ganj. You can save time by hiring an auto rickshaw to Dharamkot and then trekking the final 7 kms.

Can we camp atop Triund?

Back in 2012-2013 when I visited this area for the first time, both food and tents were easily available at the top. However, in order to counter littering and other environmental issues, camping was banned at Triund Top!

So, as of now, as far as I understand, Triund camping is not possible and you need to start early in the morning and come back to Dharamkot or McLeodganj before it is dark to be safe.

I am not completely sure about it but as far as I know, you can go ahead of Triund and camp near Snowline. It is a point around 30 mins ahead of Triund, on the way to Indrahar Pass. In the good old days, there used to be one guy running a shack turned cafe turned camping site here. Not sure if he is still there!

So, what exactly is this Indrahar Pass?

Indrahar Pass is a 4300-meter high mountain pass connecting Kangra and Chamba districts. You will need multiple days for this and the route goes through Triund, SNoiwline, Laqa Got, and Lahesh Caves before finally reaching Indrahar Pass. People generally camp at SNowline and then the Cave.  I once made a failed attempt to Indrahar. Hopefully, I will complete it someday.

The ascent should take 4-5 hours depending on your physical ability. The descent will be faster. In any case, you will have to spend one whole day. Start early in the morning and try to come back before it’s too dark to be on the safer side.

What are the prerequisites for the trek?

It is one of the easy to moderate treks you will find in the Himalayas. But if you are not a regular trekker, make sure that you’re physically fit enough. Also, carry warm cloths and water with you. Earlier, there used to be shacks offering food along the route and at the top too. After the camping ban, I am not fully sure about that.

What is the Best time for Triund Trek?

It can be done throughout the year. Try the spring or early summer for the best colours. I did it once in November and once in October and they were comfortable too. But the extreme winter will be more challenging with low temperature and fog but people try it in Jan-Feb too in order to witness snow.

You generally can do it yourself as the trail is well-marked. But if you must take one just inquire the travel agents in McLeod Ganj.

21 thoughts on “Triund Trek: All You Need to Know”