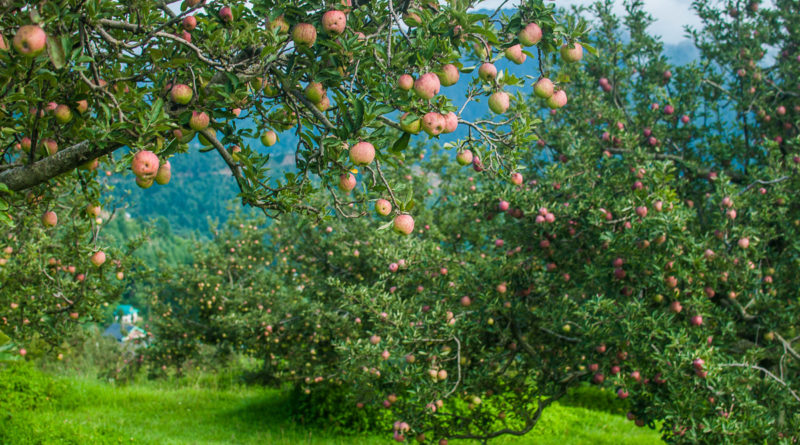 Himachal Pradesh Indian Himalayas Mandi
2019/08/192019/08/20 Jitaditya Narzary 15 Comments August Trek, Mandi, Monsoon Trek, Seraj, Thachi Valley
Spread The Love
Never heard of Thachi Valley? Well, no one can blame you for that. It is another of those gems the Seraj Region of Mandi District has to offer but I think this one has all the characteristics for the ultimate tourism storm (Which will have both its pros and cons).
It was a short, impulsive trip and the real exploration barely lasted a few hours because I had other predecided plans. Nevertheless, I think I saw enough to understand what this valley has to offer. I was also doing it in August, when the apples were getting red already. In fact, some of them were so brightly coloured that they were bordering scarlet.
I first heard of Thachi Valley through some FB posts in some Himalayan groups a few years ago. I had planned it for a while and in the mean time I had been to more famous nearby valleys such as Tirthan and Sainj many times. One of the reasons I hesitated to visit Thachi was because I was not sure about the availability of accommodation in the area. Anyway, this time I decided to go ahead with it.

Aut to Thachi: Into the Apple Country

I reached Aut in the morning and saw the bus to Thachi. I came out of one bus and hopped into the other one almost immediately. The route till Bali Chowki was as familiar to me as possible as this is also the route to Banjar and Jibhi. However, the bus took a diversion to Thachi  from here as it left the usual route. This is when I also realised that this region is at a significantly higher location as the road suddenly started going up, leaving behind the main road along the river. A sudden pine grove appeared soon, reminding me more of lower Kumaon rather than Seraj.
The views got progressively more expansive as the bus gained altitude. The Banjar Valley and beyond were visible below and as the bus crossed small villages like Deodhar & Panjain, the sumptuous slopes of the valley opened up in front of my eyes (I had also accidentally chosen the right side for the best views). Apple orchards also started appearing one these slopes, and so did small terraces of maize. The bus took around 2 hours to finally reach Thachi Village, which is the primary village in the valley and lends its name to it. The road goes further from here and eventually meets Janjehli (as told by a local to me), however, this is the last stop for buses and they go back to Aut from here.
The village is also covered with pine and cedar groves as well as apple and maize patches, although the village itself did not look very appealing at first sight. I walked for a few minutes and located a hotel, the only one in this village. As very few people visit this area, those affordable homestays have not mushroomed here already. The hotel had very big rooms suitable for families and it was not something designed for solo backpackers. The guy quoted INR 1500 for one night, which was too high for me. Anyway, after a bit fo an effort, I managed to bring it down a bit. Since there was no other option, I had to take the room anyway.
After some enquiry, I figured out that while there are several small treks and trails possible in this region, they require more time and for half a day, the best option for me was to hike up to the Hadimba Temple located above the village, on an open meadow. Before going that way, I decided to take a small walk on the other side of the village. There were several routes going out of the village and I could not be sure about any of the routes. However, going a bit far from the village offered better views of the village itself.

After a while, I gave up on these misadventures and came back to the Bithu Narayan Temple, which was just near the Bus Stand and the trail to Hadimba Temple goes up from here. I started a slow hike and soon met a local guy who was carrying cement on the back of his three mules. He asked me to follow him to a point where a new house is being constructed by his brother.

This entire trail was through a series of apple orchards, interspersed with maize patches. After 15 minutes we reached that house under construction and he instructed me to keep following the trail upwards as another locla guy joined me who introduced himself as Raju. Apparently he lived higher up, near the temple itself. I asked him about the village in general and he told me that the village got a motorable road barely 15 years ago while the college here was opened in 2017 only. We also talked about apples. I knew that last year apple production was affected by various issues in Himachal but he informed me that things are back to normal and now they were having “Bumper” production according to his own words and the following erotic frames should tell you that he was right!
After a few more minutes we reached a somewhat open area and the temple also became visible at a distance. Raju Bhai pointed me towards the northwest, where the whole Kullu Valley was visible in the horizon.  He said that even the strip of Bhunter airport can be seen although my eyes could not really locate it. He even siad that I can stay at his place if I want but sadly I had already paid the hotel! Anyway, I bad adieu to him as he moved on towards his home and I quickly crossed another apple grove to finally reach the open meadow of Hadimba Devi.
Now, we all know that Hadimba Devi temple is located in Manali (People from some other parts of India also claim to be related to that clan). So, I am not sure how this one is related to that one. The temple itself was unattended and so there was no one to talk to. It was a nice open meadow flanked by cedar forests on one side and apple orchards on the other three sides. As usual, such meadows have tehir charm but it was much smaller than the one in Shangarh.
The distant valley of Kullu is visible form here too while the other side is dominated by some huge towers, belonging to various telephone companies. For a place that received a motorable road only in the 21st century, data connectivity seemed to be excellent here.
I came down after an hour or so at the top. My plan was to visit the Bitthu Narayan Temple back at the end of the trail. Apparently it has a rare eleven headed statue of Lord Vishnu. However, it was too dark by the time I returned and had to postpone it for the next morning. As it turned out, it was raining too heavily the next morning and so I could not really visit the temple at all!

Thachi to Aut: A Misty Return

So, my quick trip ended with a rainy morning, or so I thought. The rain mostly subsided as the bus ride started and the landscapes, which were excellent on the previous day, looked even better with a touch of mist and I got very satisfactory images. I think I will simply let the images do the talking here.

How to Reach Thachi Valley?

Just get any bus going towards Kullu-Manali and get down at Aut (just after the Aut Tunnel). Thachi buses can be found standing there. Theere are several buses in a day. So, wait and ask around if you do not immediately see one. It should take around 2 hours from Aut to Thachi Village via Larji and Bali Chowki. Some other villages you will come accross even before Thachi while some others can be reached only after a bit of hiking.

Where to stay in Thachi Valley?

There is only one hotel in Thachi Village. There are some other options at other villages in the valley but most probably they are a bit far from the bus route. The best way will be to contact them beforehand and ask for directions (Something I generally do not do).

What to see and do in Thachi Valley?

There are many interesting temples and trails in Thachi. You need to have enough time at your hand to cover all these.

A temple on a beautiful meadow surrounded by apple orchards and offering poanoramic views. A short hike from Thachi Village.

A beautiful temple with a pond surrounded by cedar forests. A short hike is required to reach this place.

It is a day trek to a beautiful high altitude meadow. Ask the locals for details.

It is trek to above 3000 meters. You may want to camp somewhere here.

A meadow further at 3200 meters ahead of Chajwala. Heard of Paragliding facilities here but not sure.

A beautiful waterfall near the Ashu Dev Temple reached after a short hike.

Phone and data connectivity is surpringingly excellent, at least in Thachi Village and Hadimba Top. My airtel 4G was working perfectly. I noticed three big towers near the Hadimba top. Apparently they belong to BSNL, Airtel, & Jio.

You can visit any time. I visited in the apple ripeing season of August. Spring and Summer will also be delightful as it usually is in Himachal while in the winter you can also expect snowfall.

15 thoughts on “Thachi Valley: The Best Kept Secret of Himachal”