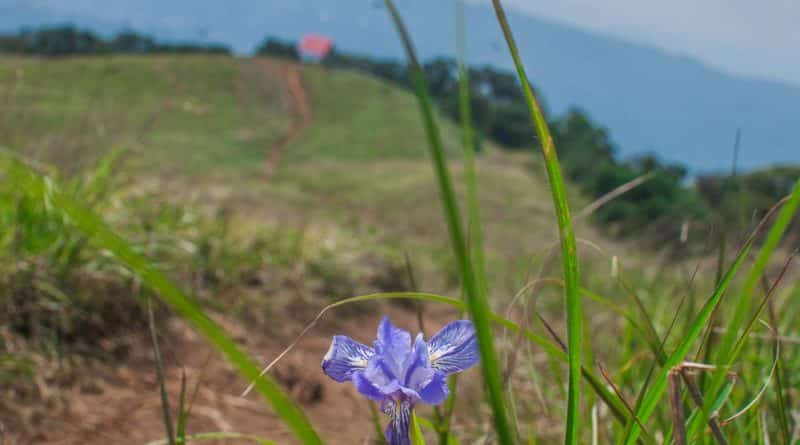 Manipur North East India
2019/06/162019/06/16 Jitaditya Narzary 1 Comment Manipur Trekking, Shirui Hills Trek, Shirui Kashong, Shirui Lily, Ukhrul
Spread The Love
So, I reached Imphal from Kohima on a bright sunny day, just after the Dzukou Valley Trek. After the rain-marred Manipur trip on the previous occasions, this time I wanted to complete the Shirui Trek in Ukhrul as soon as possible, as I knew that the sunny weather wasn’t going to last long. After spotting the Dzukou Lily, I was more or less certain finally the Shirui Lilies too are blooming. As usual, I could not find concrete information about their blooming status but decided to go ahead anyway. As it turned out, I was too early for the lilies but nevertheless, I managed to complete the trek, that too without anyone’s help.
The self-managed trek was important for me. Last time in 2017, it failed as I talked to a group of local youngsters running a travel agency, who asked me to wait for the next day, and also arranged a very expensive driver cum guide. Eventually, the next two days were rained out and the whole thing was cancelled. In other places, I would not have bothered to ask anyone but in these remote areas of NE, even I had doubts. However, this time, I not only wanted to complete it but I wanted to do it in my normal style, without anyone’s help, and by spending peanuts.  While no one could provide clear information regarding this, I am making it available now for everyone.

I booked a ticket in a shared car winger from the ISBT the previous night and the ride started at around 6 am next morning. Last time even his road was in really bad shape, with a huge hole at on the middle of the road at some point. But thankfully, that seemed to have been repaired and so the ride was smooth and I reached Ukhrul at around 9.30 am without any incidents.

I went to the same hotel where I stayed last time as it was a reasonably good hotel with a modern restaurant. On the flip side, I found out that they have increased their rates (INR 600 to INR 800 for the single room!). Nevertheless, I quickly took the room to avoid wastage of time and came out for the trek. The girl at the reception gave me some tips, but as a matter of fact, I was extremely unsure of the direction. I asked around but initial few people were not very helpful, or maybe it was the language barrier. Finally, I found one cab driver, who dropped me at the right point, 2-3 kms ahead of the town square on the Imphal road, from where a road to Shirui bifurcated, for only INR 10 (Look for Bakshi Mini-Stadium for the turning). The trek starting point was another 12-13 KMs from there. So, I waited for five minutes, until a heavily packed autorickshaw arrived. The only spot available was half a seat on the right side of the driver. Anyway, it was a pleasant ride and the road again was in good shape. It cost barely INR 40 as we crossed the Shirui Village and spotted the big gate pointing towards the trek.  The road goes further to submit me other village but the trek starts at think it.

So, Shirui Kashong (Shirui Peak) is a small peak of 2835 meters. The trek route starts from the Shirui Village on the road. It is a small day trek and in case you have not realized already, this hill is famous for the seasonal Shirui Lily blossoms (which was going to remain elusive for me anyway). Now, this trek is actually a strange one. It does not end where you think it ends and different types of stretches mix up the trek.
So, after 10 minutes hike thgrough a motorable road from the main road, I reached the ticket counter. There were some local retaurants too, selling basic food. I paid the entry fee (INR 10), they also checked for and asked to bring back all the plastic waste, and started the hike.  The initial part was a series of stairs, pretty steep ones at that. This stretch somewhat reminded me of teh last stretch at Shikari Devi Trek. It was a bright sunny day and it was almost noon. So, this part was a bit tiresome and finally, after around 45 Minutes, I finished the stairs and reached an open grassy meadow, somewhat reminiscent of those treks in the Western Ghats.
This place seemed very popular among the local youngsters. There were couples and groups of teenagers enjoying picnic at a couple of places. I walked past them through the meadow, but there was no sign of the lilies or for that matter any other flowers. After a while, I even crossed teh meadow and reached a jungle stretch. For a moment I thought the trek had ended, but then I saw people coming out of the jungle. So, the trail goes through this short jungle stretch and continues beyond.
After another 5 minutes, I crossed the jungles and the open meadow resumed again. I saw a red roof at a distance, which turned out to be a resting shade. The peak was now clearly visible. After passing the shade I finally saw some flowers, but these were not lilies. These were irises (as per a friend these are specifically Kumaon Iris). They were much smaller than the irises of Himachal that I am used to. The next half an hour was spent in hiking slowly towards the peak, and clicking the irises from different angle, and consoling myself for the lack of lilies.
Apart from other things, this area also seemed great for ornithologists and lapidopterists, although I could not really click one. I tried to make up for that by clicking a pair of mating dragonflies, and another insect that I failed to identify (I was told that it is a plant hopper but I am not sure).

The return was expectedly easier, but only till the main road. After that the natural risk of my decisions became apparent. It was around 3.30 PM and there was no apparent option to go back to the town. I tried to get a lifet but no one seemed to care. So, I started walking and prepared myself for a painful walk for 3-4 hours to reach my hotel by night. However, after 1 hour or so, finally one car stopped and gave me lift till Ukrul!

I had booked a bus ticket on after returning from the trek on the previous evening. So, I left comfortably in the norning. However, it was a rainy day, exactly what I was worried about. A gloomy day with zero visibility that had ruined my previous trip! So, on hindsight, I was right to quickly rush through it on the previous day without asking for advice. The Shirui Lily still remains elusive though. However, as far I know, it is related to the Dzukou Lily and looks similar, and I have seen plenty of those. So, I will have to live with that as of now!

Roughly, it can be divided into the following parts,
800 meters motorable road from the main road to the ticket counter
1 KM very steep stairs to the higher parts of the hill
1 KM hike through a open grassy meadow
500 Meters trail through jungle
1.5 KM hike through anothe rmadow towards the peak
So, in total, it is around 4-5 KM hike, depending on how far you go. Going up should take around 1.5 to 2 hours for regula rtrekkers. Personally, I think I turned back at around 500 meters before reaching the peak, as the views were more of the same and the lilies were not there yet.
PS: Ukhrul has other attractions too and it also organizes the SHirui Lily Fetsival every year. Read the complete Ukhrul Travel Guide for more details about visiting Ukhrul.

One thought on “Shirui Kashong Trek: Irises Before the Lilies”