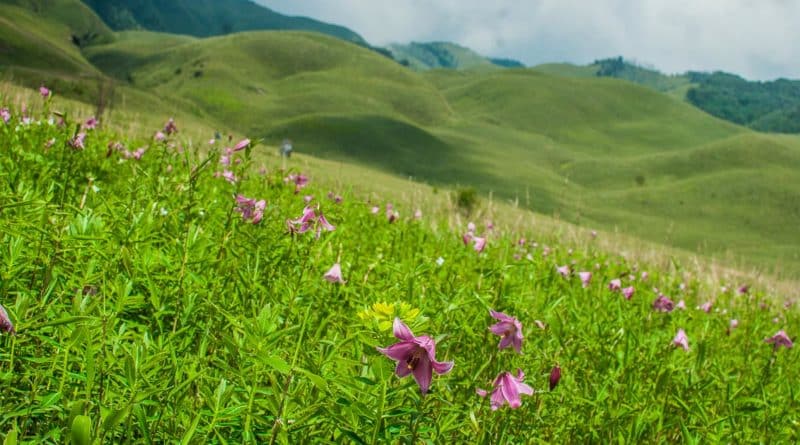 Finally I managed to do it! I reached Dzukou Valley in the right season and spotted Dzukou Lilies, avenging the previous disappointments. Rarely do I get a chance to say it but this was one of those occasions where a lot could have gone wrong but didn’t. Regular readers here would know that I have already made one failed and one successful visit to the Dzukou Valley in the Nagaland-Manipur border, probably the most famous trek in the entire Northeast India nowadays along with Nongriat. Even when I finally made it a couple of years ago, it was December and the hills were devoid of colour. On top of that it even rained and all I could do was to reach the entry point and come back after a while.

In comparison, this time I hesitated and postponed a few times looking at the weather forecasts. Rain starts as early as April in the North East, so I was prepared with a raincoat and waterproof shoes. But when I finally did it, I got consecutive days of abundant sunshine, and the Dzukou Lily season had started already. Due to my previous experiences, it was hard for me even to imagine an azure sky above those rolling greens, but this I time had that too along with the starry sky at night, although I did not have the right equipment for star trails.

I did not want any hiccups to start with, so I preferred to take the usual but boring Viswema route. I was willing to spend extra if somebody agreed to drop me at the trekking point from the highway. I left as early as 6.45 AM from my hostel in Kohima skipping the complimentary breakfast with a heavy heart (it was already very bright outside), and reached Viswema by 8.00 AM. Learning from previous experiences, I directly asked the guy at the auto-repair shop out there, and he agreed to provide a car for INR 1500 to drop me at the trekking point. Thankfully another guy had arrived by then and we shared the cost. Do note that while you can hike through this 8-9 KMs of motorable stretch, it eats up around 3 hours and tires you off and considering the mercurial weather and other issues on this trail, these 3 hours can be the difference between a successful and a failed trip.

Also, since I had done it before, I had no patience to walk through that road again and wanted to quickly reach the valley, even if by spending a bit extra. So, the car dropped me at the starting point at 9 AM, and I went through the short but steep portion through the jungle in an hour or so. It should have been faster but I realized that a few months of cubicle life in Bangalore followed by a month of rice-siesta-rice routine at home preceding this trip had taken a toll. As I finally neared the end of this steep stretch, the sky seemed gloomy through the jungle. However, as I took the final step, the sunny valley opened up in front of me. The threatening gloom was literally behind me as the thick veil of mist was being driven away by the strong winds coming from the valley.

I walked briskly through the rest of the stretch and I was at the Dzukou Guesthouse by 11.15 AM. The caretaker, who also collects the entry fees, wasn’t there (apparently he had gone to a certain spot, from where one can catch the signal and make a phone call). So, I decided to go ahead and enter the actual valley.

The real Dzukou Valley is a couple of KMs hike down from the Guesthouse. Initial stretches involve small descents and ascents through a well-marked trail bypassing the helipad (yes, that is there too, but thankfully only used sparsely for VIPs) and eventually you need to go downhill for 30 mins to reach the open valley, and also the stream (the Dzukou River).

As I have mentioned already, spotting the Dzukou Lily (Lilium Chitrangadae) was my primary intention. I had information that it was blooming already but it was not visible near the guesthouse. As I started to hike down towards the valley, I suddenly spotted one hidden inside the bushes. After that, I started seeing them more often as I encountered other visitors coming back from the valley. However, they were too few and far too scattered to provide the spectacle I was hoping for. It took another 15 minutes before I noticed a much thicker concentration on the right side of the trail, and I also noticed pink and yellow patches at a distance. The pink patches were the actual fields of Dzukou Lilies while the yellow ones were a different flower not known to me. Forgive me with the overdose of these floral closeups but I could not decide which one to use and which one to ignore.

As I reached the flat portion of the valley, I saw one trail going straight and another going towards the right. At first, I took the right one, crossed bridge over a small tributary stream, and reached those aforementioned pink and yellow patches and clicked many photographs. A lot of small birds and insects were visible too, although they were hard to click.

After a while, I turned back and decided to take the straight path, that took me to the largest stream, with only a log as a “bridge”. It was hard to balance but the water was only ankle-deep, so I just walked through the water and reached the other side.

This side was even wider and the stone pathway through the field of lilies was reminding me of the original Valley of Flowers. As a matter of fact, the valley continues even after this point, although I also had to return back to the guest house, so I reluctantly started coming back, which was harder as I had to hike up again after a tiresome day without any proper food and by that time I had run out of water too. I dragged myself while clicking photographs and finally reached the guesthouse and thankfully also found the caretaker and purchased some overpriced noodles from him (as usual, most items in the treks are overpriced due to supply problems).

The Night at the Dzukou Tourist Hut

To be honest, I was initially planning to complete the trek and go back to Kohima by the evening. However, I was too tired after exploring the valley and had taken an hour extra than my original plan. I was unlikely to make it to the highway before dark and I was not sure if any transport was going to be available at that time. So, I decided to stay back at the tourist hut (which is nothing but a big empty hall, where people can sleep) although I was grossly unprepared for the cold night. Nevertheless, I’d spent a lonely night without food in the jungle on my first attempt here (a failed one), so it could not have been worse than that.

Eventually it turned out to be a good decision as I also got the sunset pics from the valley. A lot of other visitors from various parts of the world had arrived at the guesthouse by then and the conversations around the bonfire was more interesting than what I had experienced of late. It was not exactly a very comfortable night in that dormitory with the mat and blankets provided by the caretaker (no pillows), but after a tiring day, I managed to sleep anyway.

Dzukou to Jakhama: The Alternate Route

The next day, I decided to join a few other guys and come down through the Jakhama or Zakhama Route, something I had not tried on my previous attempts. Initially, after a bit of straight walk, this trail bifurcates, and goes higher up. This ascent was short but tiresome for someone who was already tired but but as it was a bit higher in altitude, I got some interesting frames.

The landscape suddenly changes once you cross over the peak and start the descent. The other side of the hill is is a dense forest, just like the steeper portion of the Viswema route. However, on this route, this portion is much longer. Even going down through this route and reaching the motorable route took around 2 hours, followed by another hour of walk to the highway. I think the ascent through this route will be much harder.

So, with this, I am now familiar with both the routes to Dzukou. Of course, there is 3rd route from Senapati District (Manipur), but that is not a well marked trail and I have never seen anyone doing it. May be that’s what I’ll try the next time.

12 thoughts on “Dzukou Again: Lilies of the Valley”