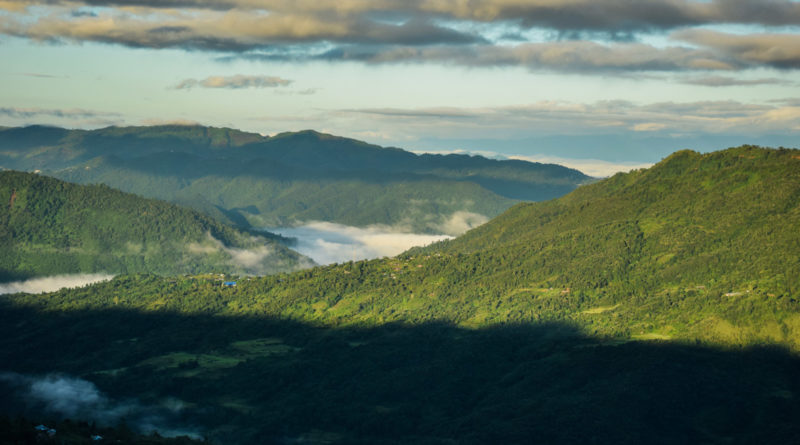 So the Shirui Lily Festival is back again and I also sure more people will finally hear about Ukhrul this time. Hardly anyone knew about either the place or the flower until recently. But the first edition of the festival drew some crowd and resulted in a bit of media exposure. So, I think it is a good time to write a Ukhrul Guide covering the festival as well as the stuff beyond the festivities.

I personally visited Ukhrul last year in September as a part of my Manipur trip. It was mostly affected by excessive rains and I could not do much. So, I am planning to go again, this time during the fest. But since I have already been there once, I am writing this short guide to help the ones who are planning to visit.

Where is Ukhrul? Who lives there?

Ukhrul is a small hill district in Manipur, centred around the town of the same name. It is around 70 kms from Imphal. It is primarily inhabited by Tangkhuls, a prominent branch of the Nagas.

What exactly is Shirui Lily?

Shirui lily (Lilium Mackliniae) is a certain type of flower that only grows in the hills called Shirui Hills surrounding Ukhrul. It only blooms for a few weeks, generally in the early summer season. It was introduced to the rest of the world by Frank Kingdon-Ward, an English Botanist who visited the area in the 1940s. The flower is known for its delicate colour and shape. It is also the state flower of Manipur.

What exactly happens at the Shirui Lily Festival?

There are many stories and myths attached to the flower and the locals have been celebrating the flowering of the lily for centuries. However, the tourist festival-related started only in 2017 as an official attempt to develop tourism in the area. Ideally, tourists also get to hike up to the hill to watch the flowers and then cultural programs are organized on the foothills. You can get a glimpse of local culture and food and also due to the popularity of western music in the region, you can expect a good concert.

What are the Shirui Lily Festival Dates for 2019?

The Shirui Lily Festival is being organized between 16th to 19th October in 2019.

Apparently, due to the elections in the summer, they did not organize the festival during the blooming season this year and doing it in October now. To be honest I am not very sure about it. The lilies will be long gone. Nevertheless, the weather will be clearer and you can enjoy the festivities without the rains or blinding mist.

Will I see the blooms during the festival?

Here is a small problem here. The flowers are likely to bloom Mid May but the festival is being preponed, probably to avoid excessive rainfall. So, you may end up missing out the actual blossoms. I am personally going after the fest, because I am more interested in the actual lilies.

How to reach Ukhrul?

Ukhrul is around 82 Km from Imphal. Daily buses leave from the ISBT. Try to get the early morning buses. Shared cars should also be available on the same route. Imphal is well-connected with the rest of the world through road and air network.

Do I need ILP for Ukhrul?

How to Get Manipur ILP?

What is the road condition in Ukhrul?

Sadly, road conditions in Ukhrul are the least appealing aspect of the place. The stretch between Imphal to Ukhrul is prone to landslides. I also got stuck there and spent many hours walking on the road.

What else to do around Ukhrul?

Shirui Kashong or Shirui Peak: It is the primary attraction where the lily blooms. It is around 15 KMs away from the Ukhrul town. Even without the lilies, it offers good views and can be a good hike at any time of the year. Read my full post on self-guided Shirui Kashong Trek here.

Village Visits: You can visit the nearby villages of Ukhrul. This is a good way to witness local lifestyle. Some of the villages also have a collection of skulls from the headhunting days. I also had the opportunity to visit one as you can see. (I forgot the village name)

Pisgah Eco Park: It was developed as a community space for locals. The most distinctive aspect here are larger than life monolithic statues of Tangkhul ancestors, created by some young sculptors. It is located near a cliff, overlooking the Shirui Kashong. You can also hike down from this point.

Phangrei: It is a popular spot for locals, around 30 KM from town. There is a small lake and open grounds for camping.

Wuya Kachui:  It is a nearby hill that also is known for unique seasonal blossoms of Pink Orchid Ginger. I found a good post about Wuya Kachui, practically the only available post about the place online.

Huishu: Huishu is a remote village in the Myanmar border. It offers excellent views of the lower valleys from the top.

Khangkhui Mangsor and Harva Khangai: These are some limestone caves locate near the Khangkhui village. Some stone-age remains have been discovered here during recent excavations. This shows that these areas have been inhabited since the prehistoric times. Here is something more to read about the caves.

Nillai Tea Estate: These tea gardens are located near Talui, the second largest town of the district. The gardens primarily produce green tea which i svery popular.

Local transportation in Ukhrul maybe a bit difficult. Due to not so good roads and lack of proper public transport, most of the aforementioned attractions are not easy to reach. You can hire cars from ukhrul but that can be costly. That is why, although I like going solo, I think it is better if you travel in a group here so that cost of the vehicle can be shared.

Ukhrul has decent accommodation options for everyone. I personally counted at least half a dozen hotels. I spent two nights at 25 Degree North, the fanciest place in Ukhrul. It is a new hotel with modern facilities and a good view of the town and the hills. Single rooms cost INR 600, double rooms a bit more. I also spent one night in Tiptop hotel, a comparatively less fancy but clean hotel for INR 400. Also, during the festival, there should be temporary camping facilities around the hills.

25 Degree North has a restaurant where you find the usual food that is available elsewhere in India. In other smaller eateries around the town, you mostly find local food.

Phone and Data Connectivity in Ukhrul

Phone and data connectivity is surprisingly good at Ukhrul. Seeing the state of the road, I was expecting to get disconnected by the time I reached the town but actually by Airtel 4G worked without any hiccups.

As you can see, the time is when the Lily blooms. The timing can differ but it normally happens during late April, May or early June. However, do note that this is also teh rainy season and you will have to be careful about the same. Otherwise, late October or early November is another good window when the weather is clear. You will not get lilies but the whole town will be pink with cherry blossoms.

What to keep in mind in Ukhrul?

Always remember that it rains heavily in this region. You never know when it starts raining between April to September. Always be prepared for the rain and protect your camera and other types of equipment. Also, there may be days when you get zero visibility due to rains and forced to abandon the plans. So, always keep a day or two extra. Don’t make a plan for only one or two days, especially in the rainy season.