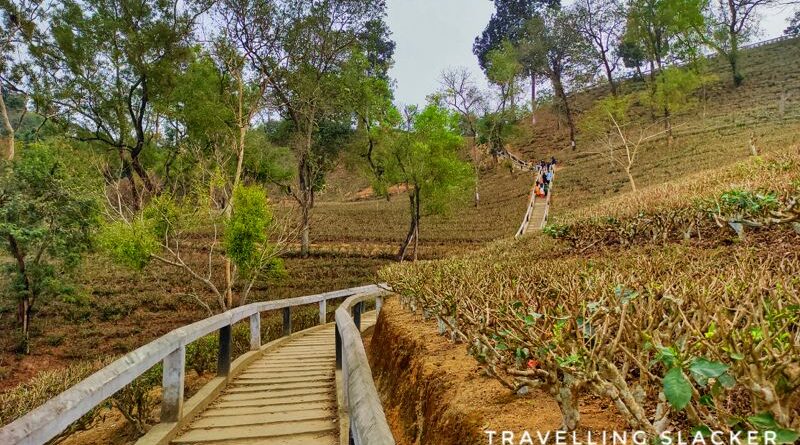 Assam North East India
2021/06/062021/06/09 Jitaditya Narzary 1 Comment Ahom History, Tea Gardens, Tipam
I won’t be surprised if  Tipam Deosali Hills (mostly referred to as Tipam Hills) doesn’t ring a bell. My own idea about it was vague until recently. However, it is one of the most important sites related to the Ahom Kingdom. Not many have heard of it because it can’t exactly be called an archaeological site. There is no big monument here. The Kingdom was yet to be built. It was sort of the first settlement of Ahoms in Assam upon their arrival in 1228 AD.
While talking about the Ahom Kingdom, most people think of Sivasagar, which has the best-preserved monuments of that era. However, that actually changed the capital many times. Sivasagar was just the best-known one with the largest monuments. But they were built much later. When the Ahoms first arrived in Assam under Chaolung Sukapha, it was just a small group that completed an arduous journey lasting many years. They were delighted by the sight of the fertile valley as they descended after crossing the near-impregnable Patkai Hills via Pangsau Pass and settled down in this area in and around the Tipam Hills. They cultivated rice, gained knowledge of the terrain, developed strategic ties with other ethnic groups already living here, and gained strength for future expansions. After a few years, they ventured out to occupy other territories, and thus at Charaideu the first real capital came up.

So, I was staying at a hotel in Tinsukia after returning from Tamladu Festival of the Mishmis in Arunachal. I’d already talked to Joydeep (Better known as The Gypsy Chiring), about this visit. He’s a local guy who lives in Bhadoi Panchali, a small town on Digboi-Duliajan Road. This region is known for the tea, coal, and petroleum trade. I took a shared car and reached Naharkatia from Tinsukia. From here Joydeep took over with his scooter. The First stretch was easy while the last few KMs were a bit bumpy but anyway we reached in 45 minutes. Even before reaching the main hill, we came across a small temple called Sri Sri Tipam Burha Dangoria Than. It seemed to have been has been renovated over the centuries and locals still revere it. However, as per the records, this is where Sukapaha sacrificed.a.white stallion to start his conquest of Assam 800 years ago. So, the original shrine may be older than that!

Here, it is noteworthy that right now the whole Tipam and surrounding hillocks are just a series of tea gardens owned currently by Jeypore Tea Estate. As you probably know already, tea plantations started by the British changed the face of Assam’s economy. Especially in Upper Assam, they are omnipresent. There are big tea companies that own huge tracts of land and then there are local small scale planters too, who sell their products to bigger farms. In spite of all this, Tipam had remained ignored, and forgotten until recently, which is the usual phenomenon in this state. Only a few years ago, efforts started to attract tourists to this place. This is when the stairs were built to the top of the hills. Its still remain unknown outside, but at least for locals, it has become a regular gateway.
So, we slowly climbed up the stairs, took enough photo breaks, and reached the top in 20 mins. There were a lot of local visitors already but there is also a point of confusion. There is a small temple here too and a lot of people think this to be the temple associated with Sukapaha (which is actually Burha Dangoria Than, the one I mentioned before). This temple is probably built later by people working in the tea garden (the bulk of the tea garden workers in Assam were brought from Jharkhand and Odisha by the colonial planters and they have lived here since then and many of them continue to work in the gardens).
Nevertheless, a more recent addition here is a small shade with a life-size painting of Chaolung Sukapaha. I think it’s an attempt to reclaim the heritage (A small museum here would make more sense I think). There’s also a priest who is present at the site. You can have a conversation with him too about the place and its importance (If you can speak Assamese).
As this point is located at an elevation, it is not hard to see why it was chosen as the first settlement. It offers a good 360-degree view of the whole terrain. You can see the Burhi Dihing river flowing at a distance. The rainforests of Dihing Patkai, as well as the road going towards the impregnable mountains of Tirap (now in Arunachal), are visible from here too.
From a traveller’s point of view, you don’t have to see Tipam as an isolated and obscure attraction. It’s one of the things to visit in a highly underrated region. This area is also the gateway to parts of eastern Arunachal such as Namdapha, Pangsau and Tirap. If you have time, you can spare a day or two in these areas. These areas were the hub of petroleum, coal, and tea trade started by the British and apart from the natural charm of large swathes of tea gardens, you can find many historical gems here such as Tipam Hill (where the Ahoms had their first settlement after entering Assam 800 years ago, Namphake as well as Tipamfake  Buddhist Villages ( Theravada monasteries for the local Buddhist community… more about them in a different post soon), Digboi Oil Museum (that traces the history of oil drilling in the region), Margherita Coal Museum (charts the history of the coal trade in the region), Tipong Colliery (A coalfield in a scenic location) & Dehing Patkai National Park (A newly minted national park rich in flora & fauna).  As it is a tea garden now, it can also be included in a tea tourism itinerary.
The only problem here is the littering that has started with the inflow of local visitors, which is always the case in this country! I hope strict measures are taken soon before it is too late. The best part of Tipam is the sheer topography. I think it’s a treasure trove for landscape photographers. Unfortunately, I was only carrying the phone on that trip and on top of that February is not really the best season in Assam in terms of looks. I know this is tourist season as it doesn’t rain or flood during this time but nothing beats the wickedly sensuous landscapes of Assam during the rains. That’s why I took a few images from Gypsychiring taken during the rains. This should give you some idea about the issues I had with te season. I’ll leave you with these.
How to reach Tipam?
Tipam is barely 35 KMs from Tinsukia. Major industrial towns like Naharkatia, Namrup, Duliajan, and Digboi are located in 15-25 KM radius. Joypur or Namphake village can also be nearby major spots. There are multiple approaches to it. However, you may not get direct public transport to the place. It’s easier if you have your vehicle or you can reach one of the nearby towns and ask locals.