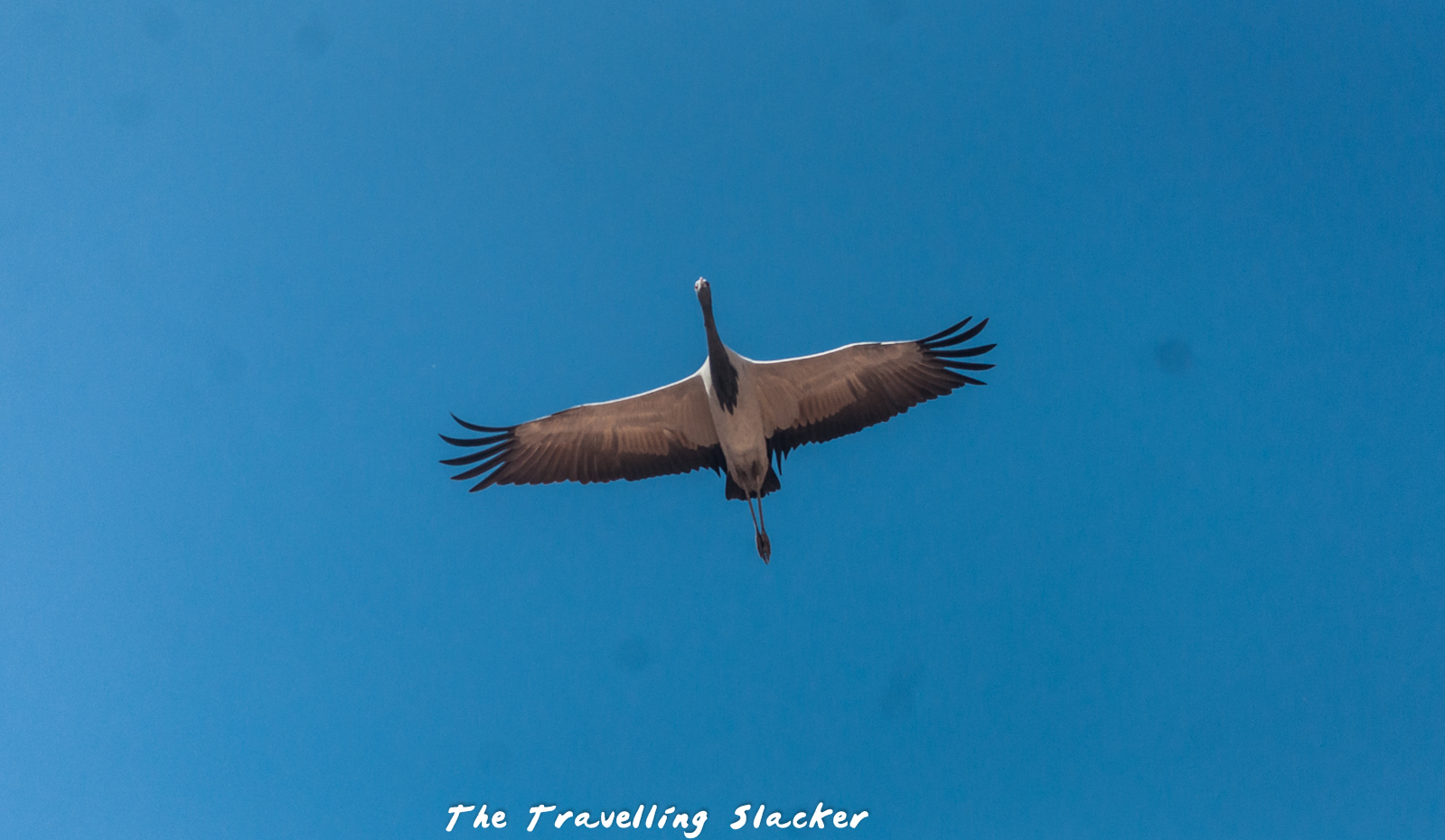 Dwindling wildlife and their conflict with the homo sapiens is a constant and worsening theme in the history of our civilization. That is why whenever I discover a positive story in this regard, I try to witness the same. The story of the demoiselle cranes of Khichan is one such rare but pleasant story that should delight everyone. 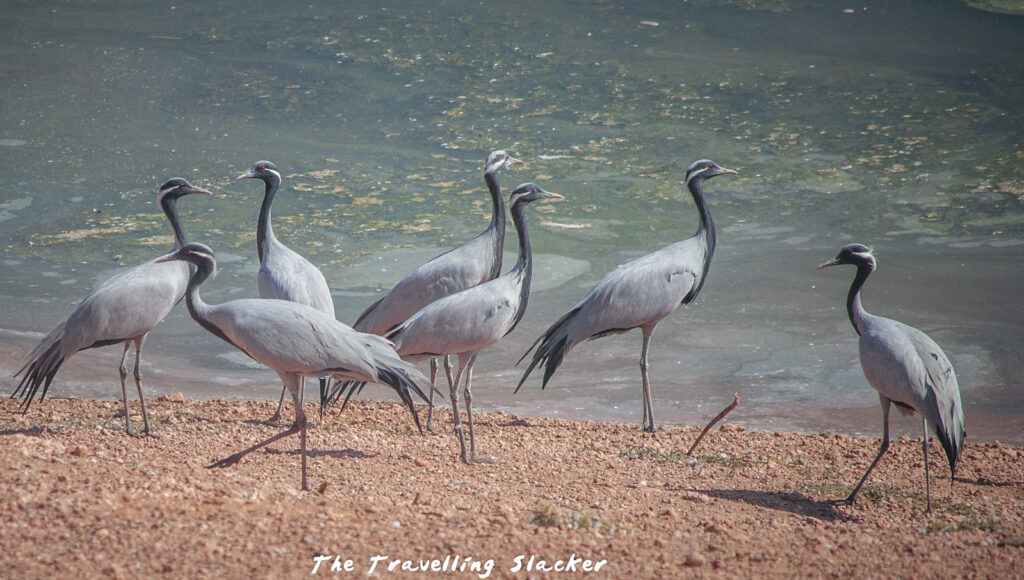 Khichan is a small village located somewhere between Jodhpur and Jaisalmer. I came across the name a few years ago, probably in some travel forum. It is known for the thousands of demoiselle cranes (Anthropoides Virgo) that flock this nondescript village during the winter, when the Eurasian Steppes get too cold for comfort. More importantly, the villagers protect and feed them religiously, instead of hunting them down unlike some others places. What is interesting here is that this is a fairly new phenomenon and not something continuing from prehistory. From whatever information I could gather, these discovered this spot only a few decades ago and kept returning due to the safety and hospitality. So, we can rest assured that these birds are intelligent enough to find what is good for them and not merely following the habit set some mysterious primordial creator or advanced clients from prehistory.

I reached Phalodi junction, the nearest railhead to Khichan, at noon. I was coming from Jaisalmer and planning to move on towards Jodhpur to catch another train to Kota. But I had kept a few hours in between for this although I was not fully sure about the route. I had tea at a shop near the station and inquired them about it. They said that I can just take an autorickshaw and so I did. He quoted 300 Rs for going Khichan, waiting for an hour and returning. I knew it was a bit higher and I could have bargained but I readily agreed as I was happy that I will be easily achieving my target without any hiccups. Also, since he agreed to wait, I could just leave my luggage with him and move around freely.

It was barely 5-6 kms away and we reached within 10 minutes. Initially, it just looked like any other place in the region but suddenly the autorickshaw took a turn and stopped in front of the “entry point” which is basically a bit of elevated ridge hiding the bird area from the passerby on the highway. The entry fee of INR 30 wasn’t much and I could already hear the loud chorus of trumpeting calls by thousands of cranes although I could see none of them. Anyways, after the formalities, I climbed a few stairs and suddenly found myself amidst a completely different universe. 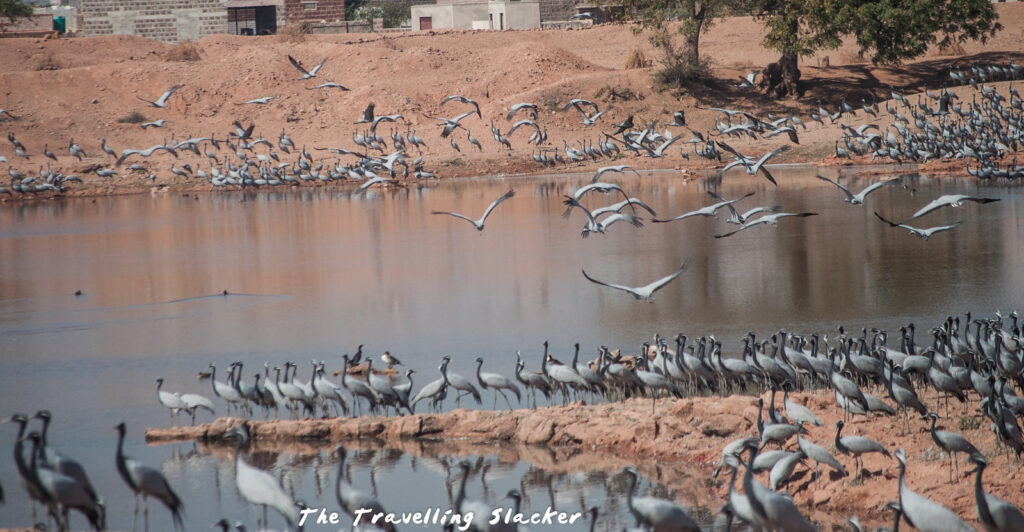 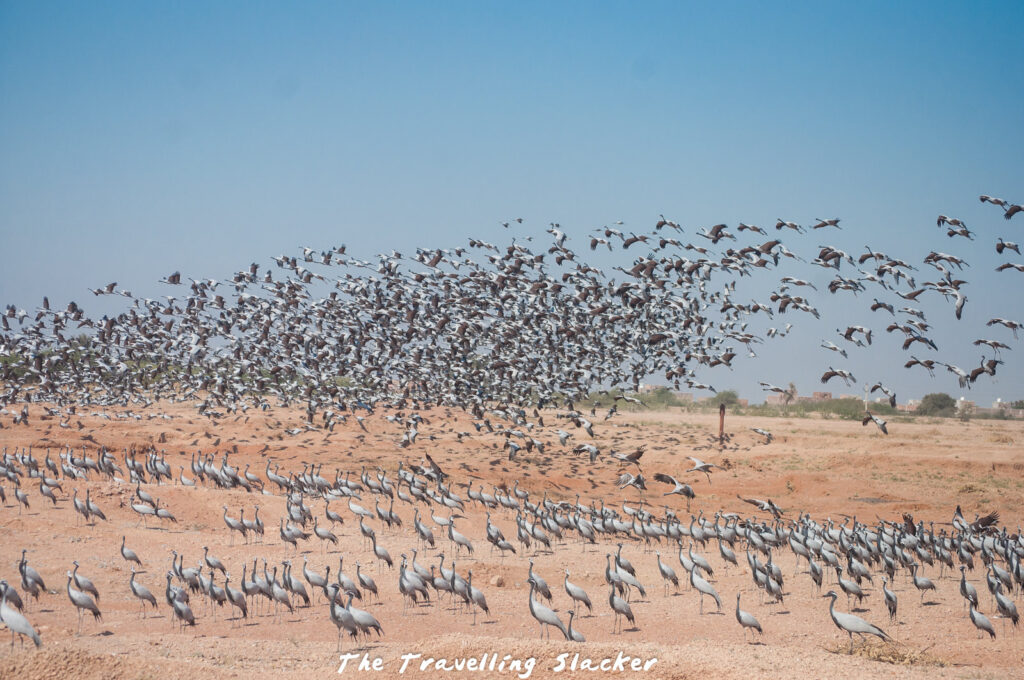 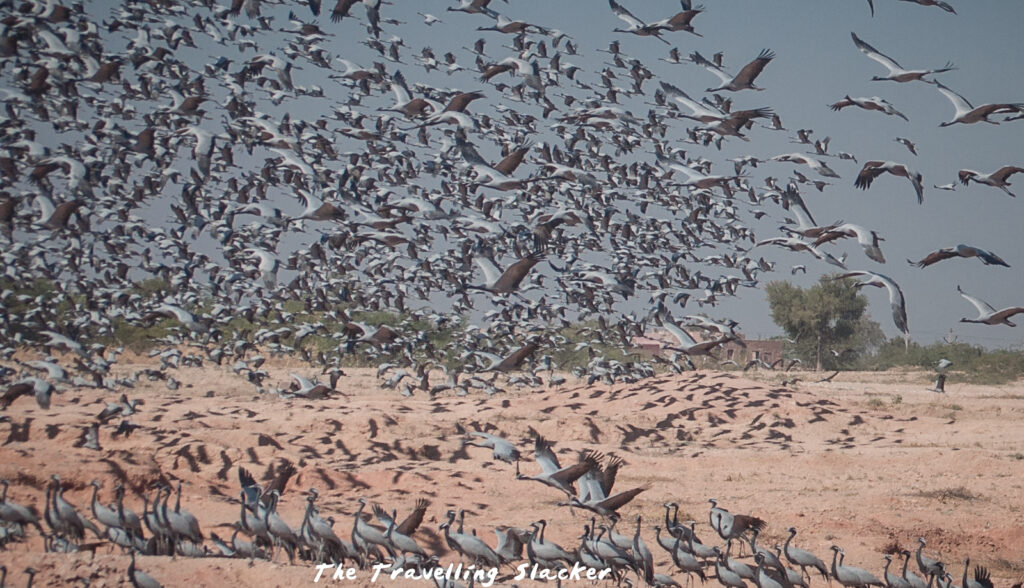 There was a small water body in the middle of an otherwise arid, reddish-brown landscape and there are thousands of cranes covering the entire stretch beyond it till the horizon. Occasionally some of them will suddenly take flight, covering the sun like the Persian arrows, only to settle down after a while. They do love this place. 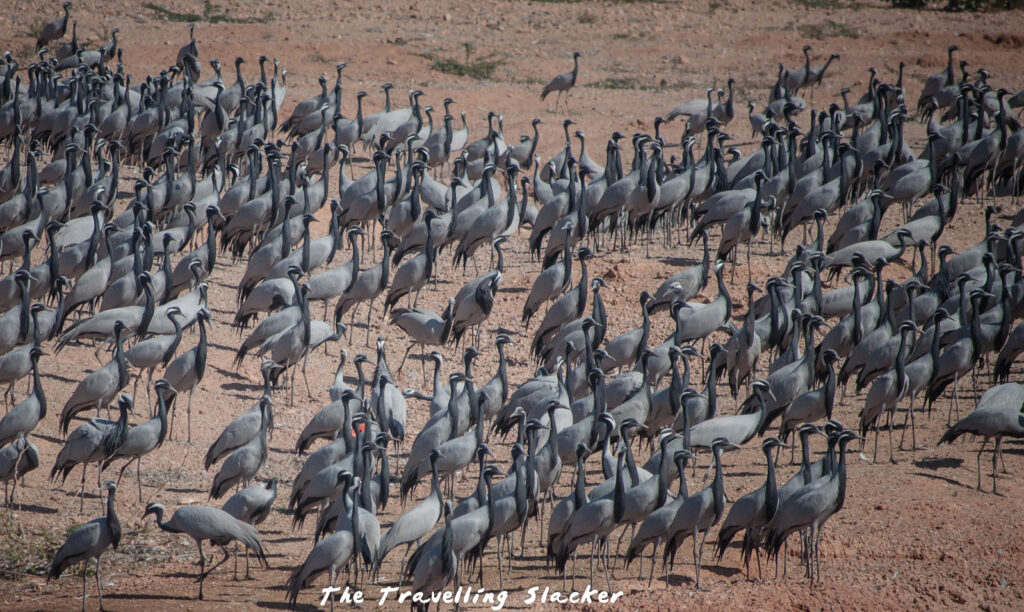 However, I felt alarmed every time they did so, screeching loudly and flying over my head. However, after a few minutes I exorcised my Hitchcockian demons and realized that these birds are mostly peaceful, just like the people here. 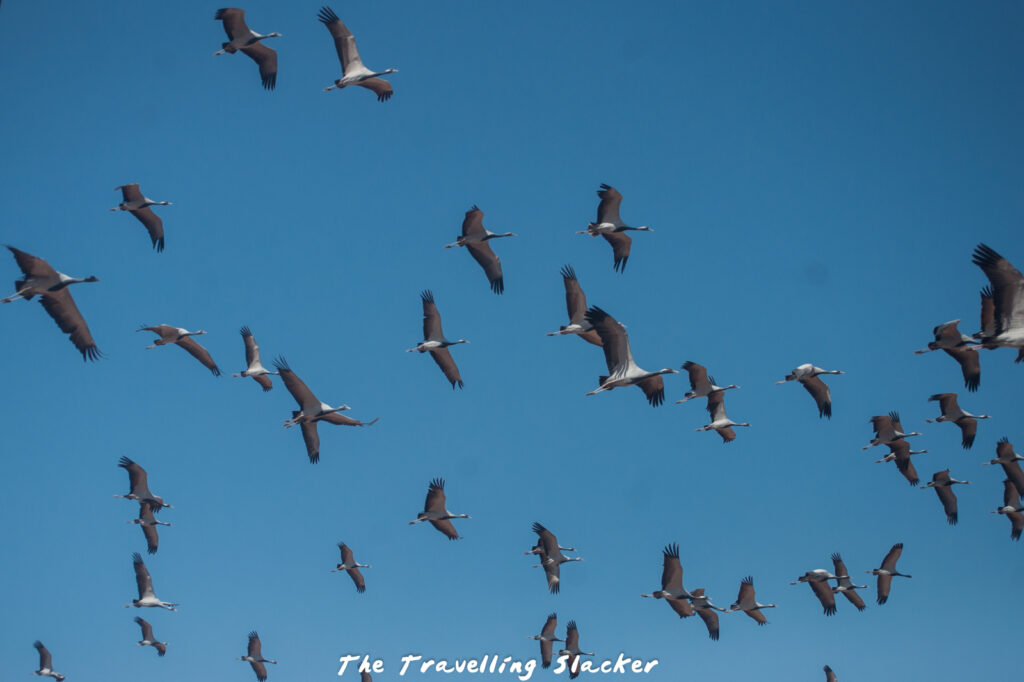 I was told by one of the locals that they arrive early morning and the villagers arrange for their food. After that they spend the whole day here and then for the night they fly away to a different place. I could not fully understand what he was talking about but apparently, there is a salty lake somewhere in the Thar desert where they spend the night. 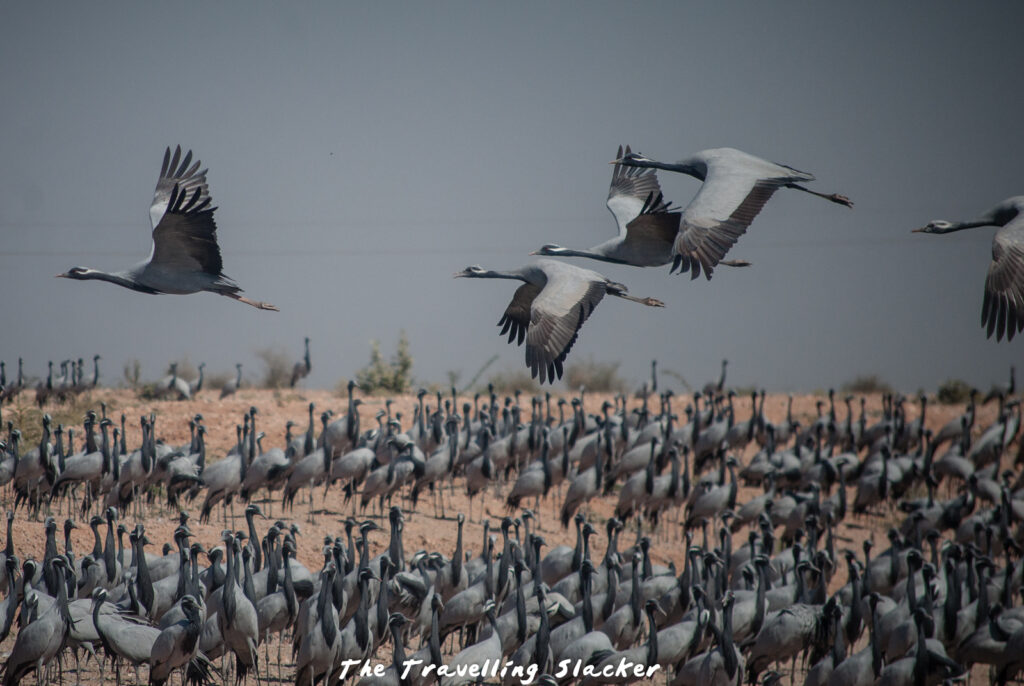 I walked around the area and saw multiple ponds around which the birds congregate. They are here in such high numbers that they have overshadowed the local birds. I could barely see one egret and probably a couple of ducks among other species. Apparently, these cranes love the place so much that they start arriving for the winter sojourn as early as August nowadays and stay till March. 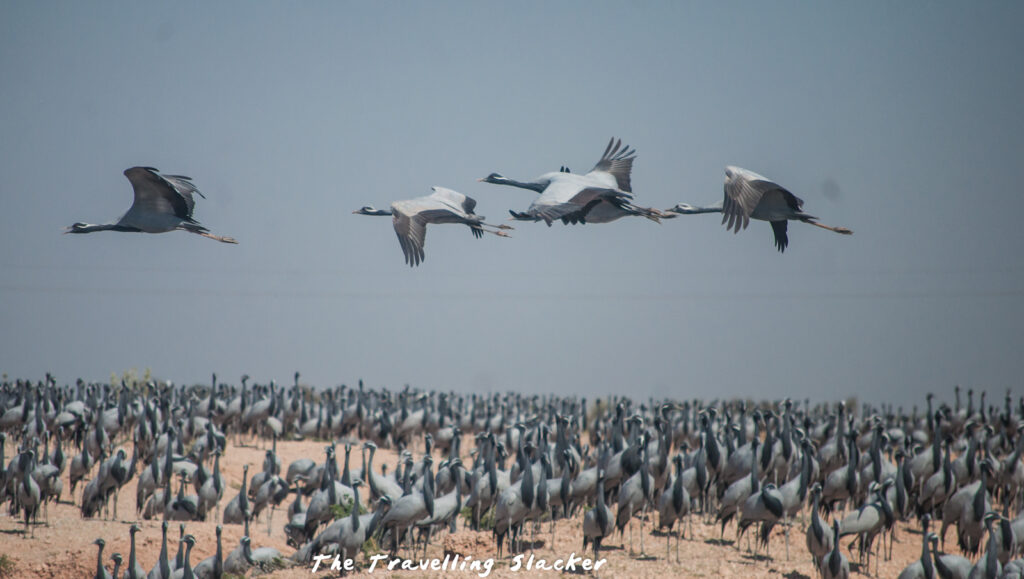 I clicked pictures to my heart’s content although the 55-200mm was not very satisfactory and an hour and a half flew away. I returned to Phalodi and moved on to my next destination but this will remain one of my shortest by most satisfactory detours.

Where is Khichan and what exactly is the deal here?

It is a small village in the Thar desert region in Rajasthan. Jodhpur is the nearest big city, 139 kms away. It became famous because the villagers started feeding and protecting migratory demoiselle cranes. Number of these seasonal visitors has swelled over the years. You also explore the village and its old havelis.

Phalodi is a junction on the railroad between Jodhpur and Jaisalmer. Khichan is barely a few kms from here. You can get autorickshaws, everyone knows the place here. Otherwise, Phalodi is also connected via buses with other major cities such as Jodhpur, Jaisalmer, Nagaur and Bikaner, all less than 200 kms.

How much will it cost to visit Khichan?

Not much really. The autorickshaws will quote anything between 200-300 to go, wait and come back to Phalodi. You can also get into the buses if you can figure out the route and save money. Actually, it is not very far and if you have time, you can actually take a walk. Entry to the village is INR 30.

Can one stay in Khichan?

There are one or two resorts out there. I guess they are only beginning to realize the tourism potential. Although I had no time, it is not a bad idea to spend a night here because you can then catch the early morning feeding rituals, which, according to a local villager, is another sight to behold.

What is the best time to visit Khichan?

The birds start arriving in August and stay till March. However, it is advisable to avoid the heat in Rajasthan and visit between December to February for a comfortable experience.

16 thoughts on “Khichan: A Hitchcockian Delight”