The final stretch of the road from Sivasagar to Charaideo is actually a part of the historic “Dhodor Ali”, literally the “Road of the Slackers”. This is called so because the king got it built by forcing the less hardworking members of the society who were otherwise known to do no productive work. This made me wonder, what would have been the state of a travelling slacker in that kingdom? This was not a very pleasant realization for me. Nevertheless, I carried on.

Charaideo (Che-Rai-Doi) roughly means a town on the foothill of the mountains in Tai language. The Ahoms, who originated from the Yunnan province in China, descended here from the Patkai Mountains and made it the capital. Later on the capital moved to nearby Garhgaon and eventually to Jorhat. As of now what is left here is a series of graves (called “Maidam”s, and don’t mistake it with the generic Indian word “Maidan”) belonging to those kings and other members of the royalty.

I reached Sivasagar in the afternoon after a trip to Majuli. There was a lot to see in the town in less than 24 hours. So, I decided to first be done with the one that is the farthest and took the bus to Charaideo, which is 30 Kms from Sivasagar city. The bus moved at a snail’s pace and took almost one and a half hours to reach. It was 4 PM and as I feared, it was already getting too dark for photography. As the entire country follows one time zone, the sun rises and sets too early in the easternmost parts of the country. This is why the debate for separate time zones keeps rearing its pretty head time and again.

Anyway, I got my tickets and tried to make the most of the situation. The site seems to have been repaired and beautified so it was good to finally see an archaeological site in Assam that was not in a completely neglected state. The protected maidams are on the top of a small hillock, now adorned by stairs and a couple of cannons in front. 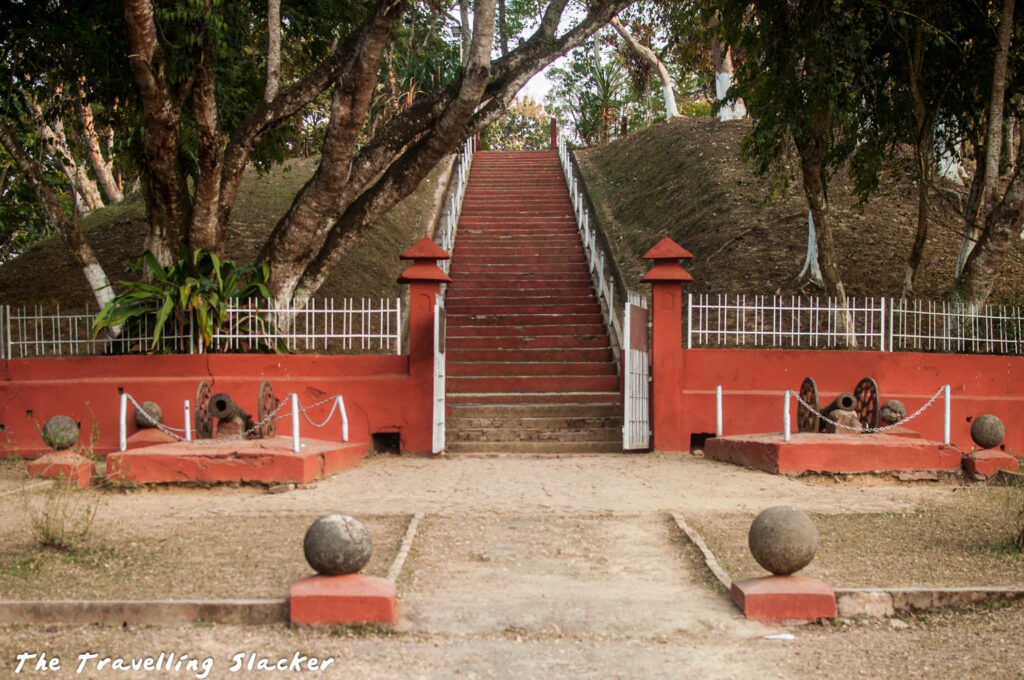 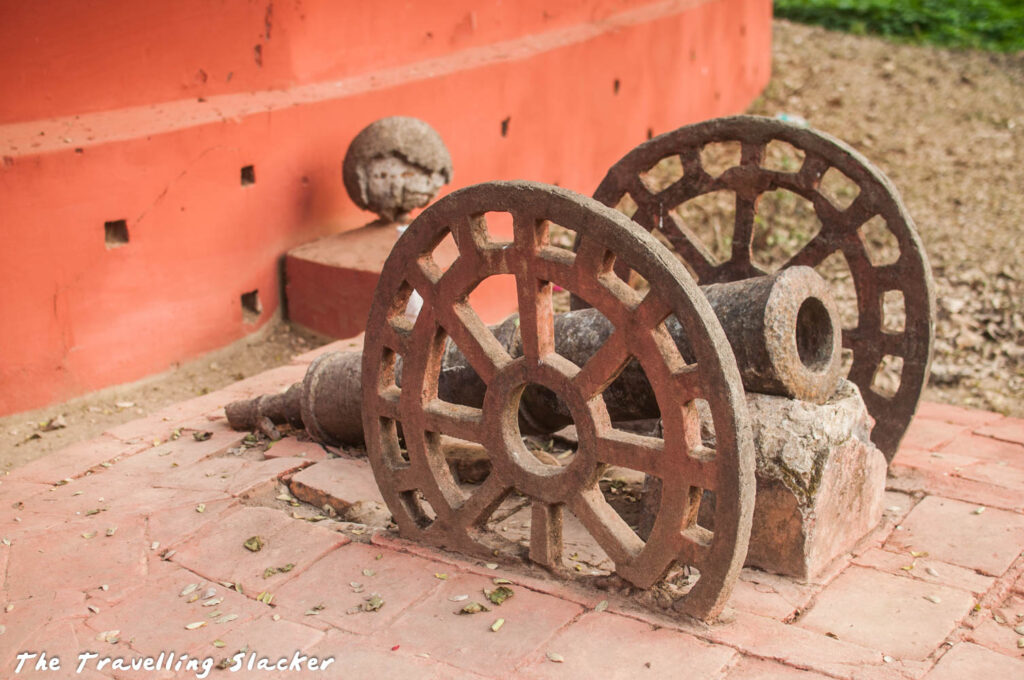 As I reached the top, a series of hemispherical mounds appeared. They were mostly earthen mounds with no opening. But I could see a couple of larger ones in the vicinity. Eventually, I reached the one that had an opening, sort of a gate with a door made of stone. It reminded me of the little homes of the Hobbits. The only

catch here is that the ones coming out will be the undead ones. 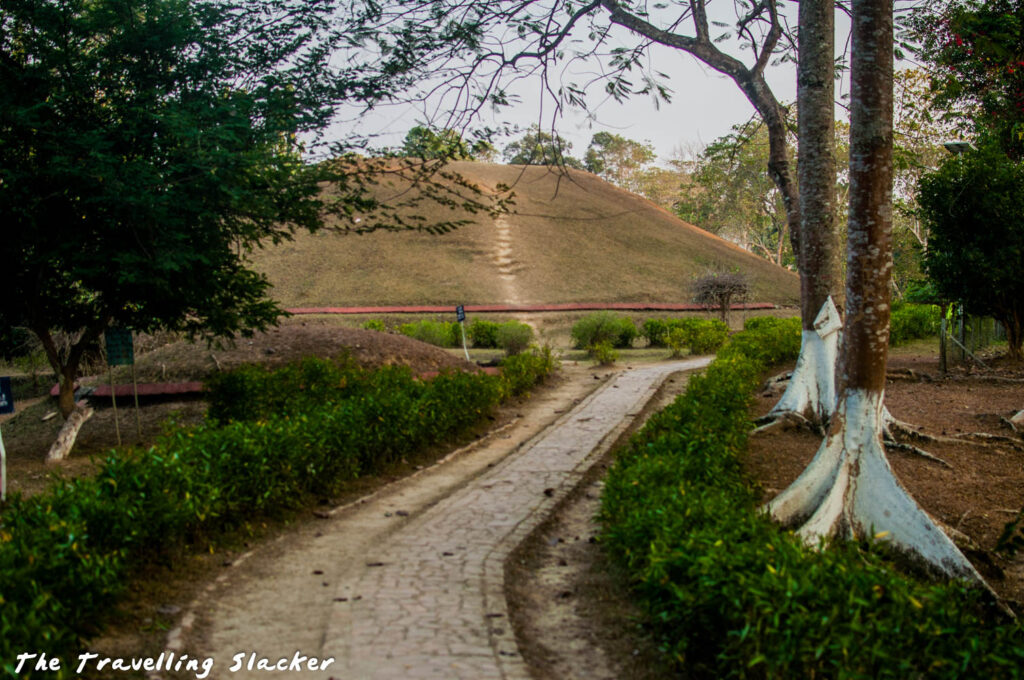 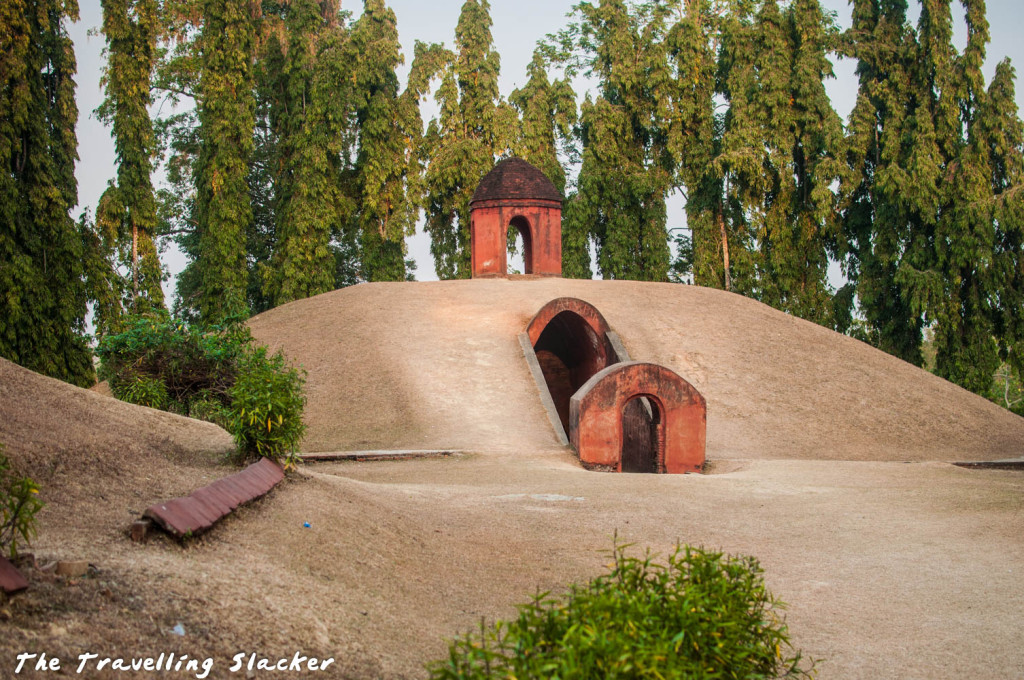 In spirit, these maidams were close to pyramids. The interiors of these mounds worked as crypts for burying dead kings along with valuable items and food for the afterlife. According to some details they also buried servants, pets, and even wives along with the dead king. I hope those stories are not true. 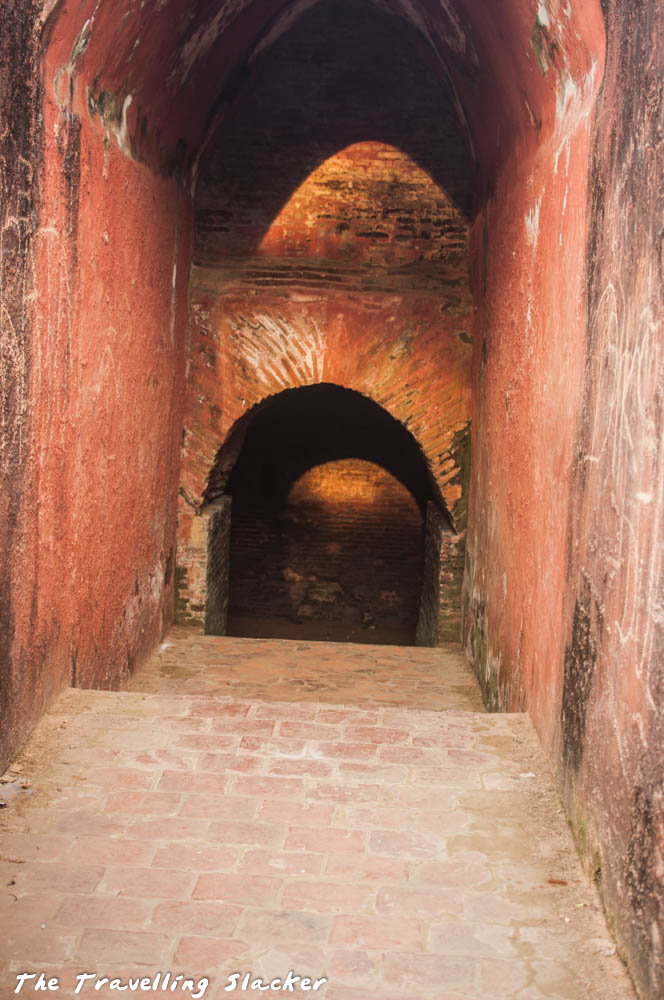 I climbed up the next hillock, overlooking the vast tea estates on the south. This is the point that gives a good 360 degree view of the area. I realized that there are even more maidams on the eastern side of this complex. It was getting dark so I came out and tried to reach that part. The entry to the eastern side had a separate gate and more importantly, it was locked! It was only 4.30 PM but the people at the gate said that this other part closes down at 4 PM which really made no sense to me as the other side was still open. It looked like more of the same from outside so gave up on that and started coming out, while silently cursing the usual bureaucratic whimsy. 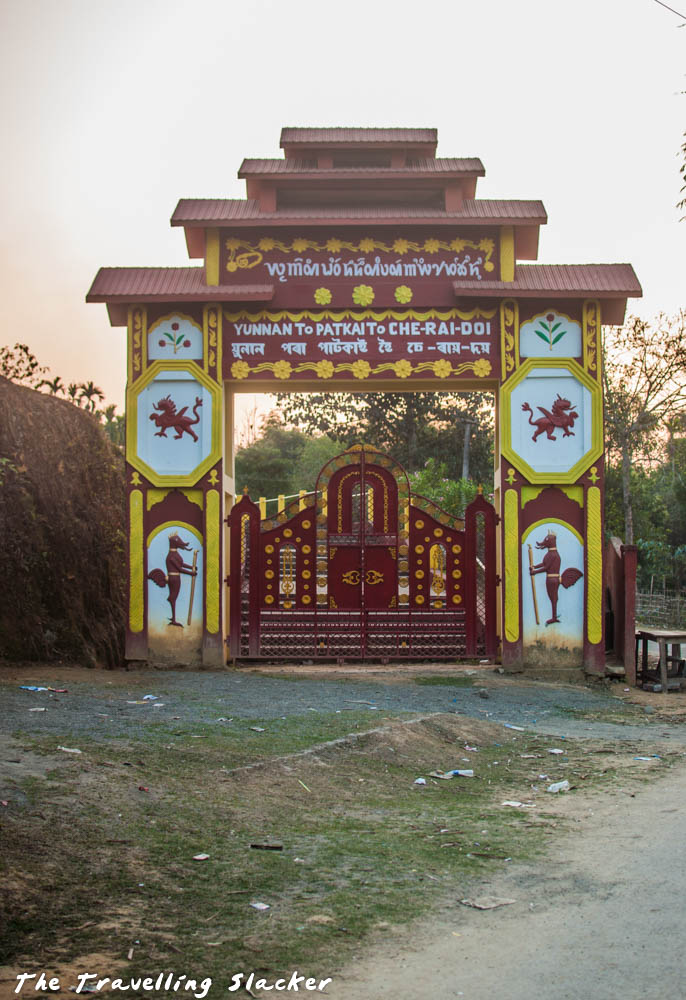 As I was coming out, I noticed a shiny oriental structure that nobody told me about earlier. It seemed to be a new structure but as you might have guessed it already, it had also closed down by then. But I did like the design of the building, basically, a museum dedicated to Chaolung Sukaphaa, the founder of Ahom Kingdom. It is named evocatively as “Yunnan to Patkai to Che-Rai-Doi”, describing his epic journey. 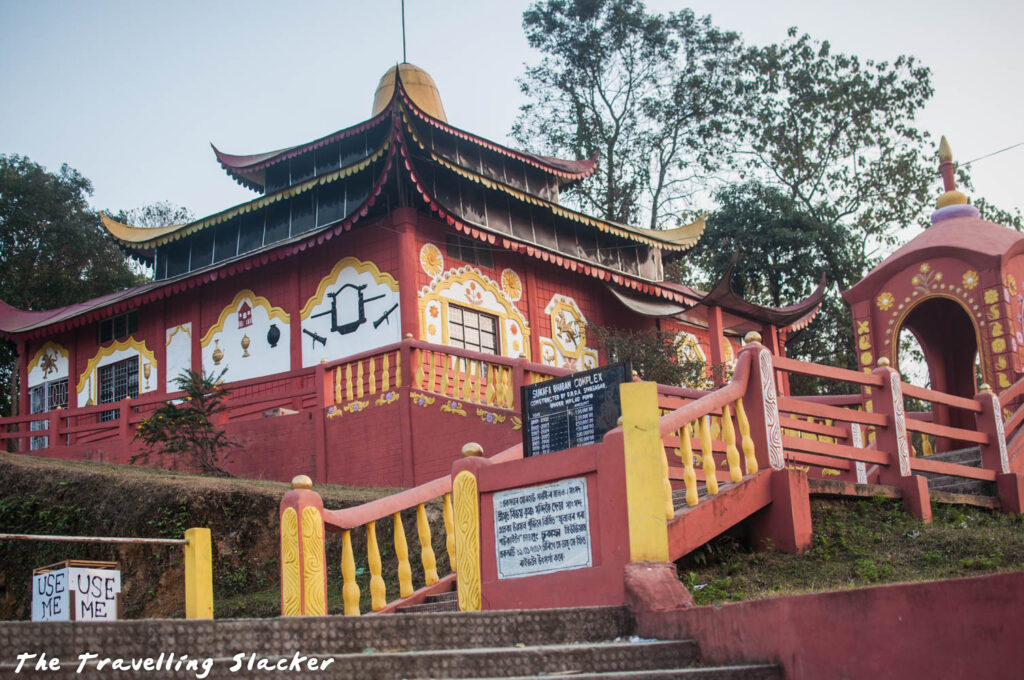 It is noteworthy that the Ahoms gradually converted to Hinduism and gave up the practice of burying. But even then the ashes of some of the kings were buried. Over the years many of the maidams have been looted and vandalized. Originally there were more than 150 of these maidams in this area but only around 30 of them have now been protected by ASI. Also, it would have been great to know which grave belonged to whom but I think that information is not available anymore. 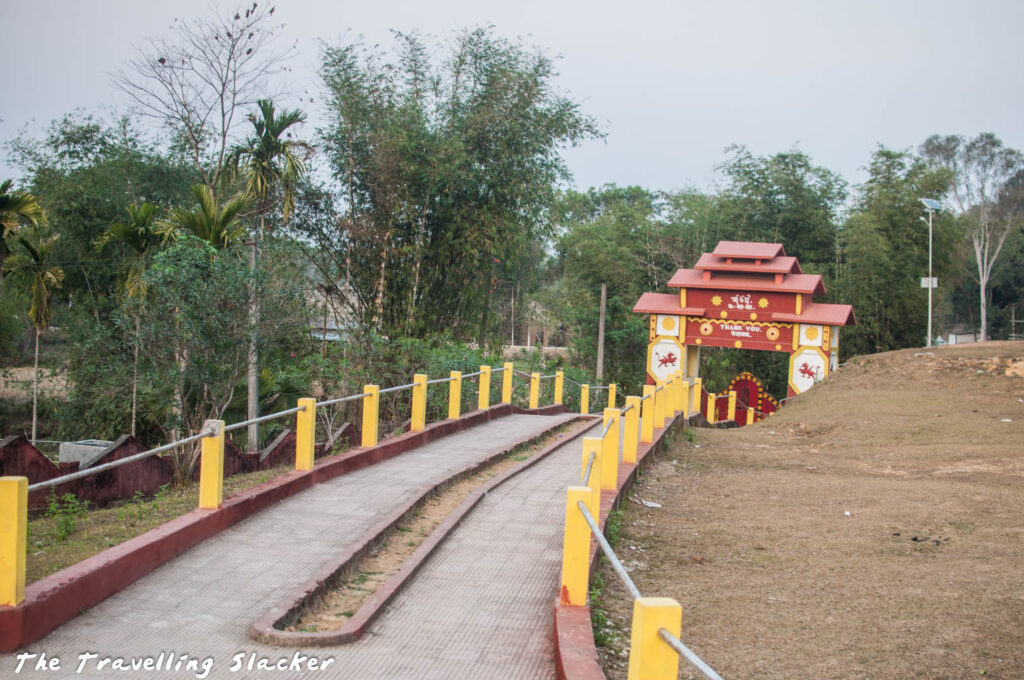 I returned not fully satisfied but at the same time there was enough to see and ponder about. This is only the first glimpse of my recent trip. I will soon be back with much more of Sivasagar, and also of Majuli. Stay Tuned.

How to reach Charaideu?
It is 30 KMs from Sivasagar town. Look for buses or shared vans going towards a place called Sonari. Ask the bus conductor tp drop you at the right place.

What to see at Charaideu?
There are “maidams” or royal graves of the Ahom Kings. There is also a small museum.

What are the timings?
Go early and try to wrap it up latest by 4 PM. Keep at least a couple of hours for siteseeiing.

What are the ticket price?
INR 15 for Indan travellers and INR 200 for foreign nationals including camera charge (non-commercial).