It looked like a set of mundane huts, barely standing there, braving the assaults of time and harsh weather of the cold desert. However, as I walked in, I came face to face with Maitreya, or rather his larger-than-life feet. This deceptively plain hut hides inside it a gigantic statue of Maitreya Buddha, the lord of the future who will sooner or later arrive, offer further enlightenment and probably destroy us, the pathetic sinners. 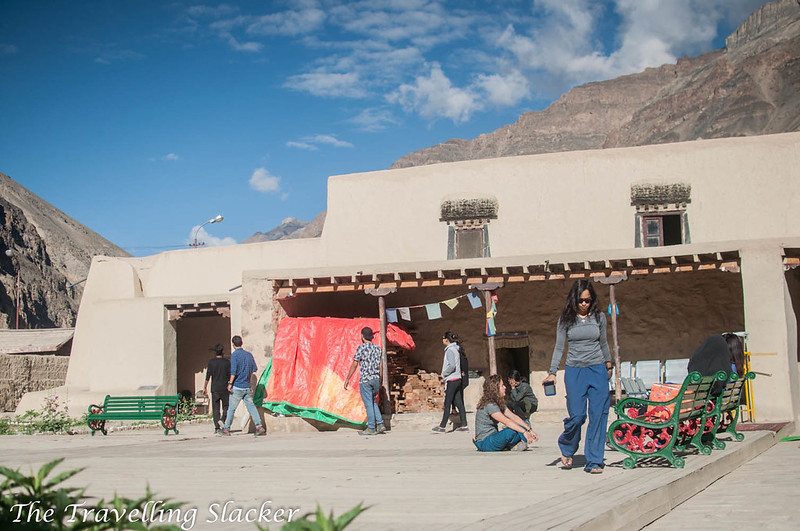 Last year, when I visited Nako, I was somewhat underwhelmed by the monastery. This was because the old monastery was no longer functioning, and was just a set of huts without any noteworthy artifacts. Nako was still worth the trip for many other reasons. But I was itching to visit a historic monastery that has been preserved in its original form. I knew, a couple of hours more after Nako lies Tabo, one of the most important Tibetan Buddhist monasteries in India. However, I had to return from the border of Spiti last year, due to many resource constraints. However, this time I finally managed to break the Kinnaur barrier and enter Spiti, kick-starting the trip with Tabo. 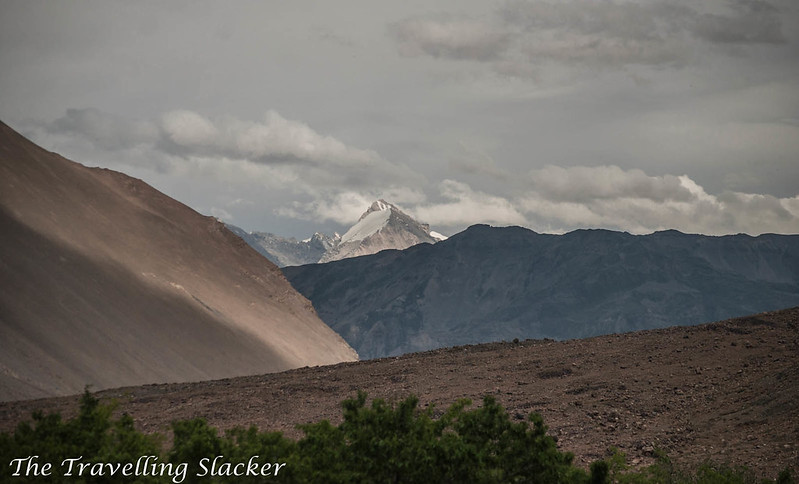 I caught the Kaza-bound morning bus from Reckong Peo at 7 am. The bus was packed as there is only one bus on this route per day (there is another one at 11.30 but it goes only till Sumdo). But I managed to take a good window seat and a local guy from Kaza was beside me. He shared some interesting factoids such as the one about a village (forgot the name!) that the bus crossed, was technically within Spiti but was under Kinnaur administration.

The bus took even longer than usual and reached Tabo at around 3.30 PM. The place was already teeming with other tourists and a few more of them arrived with me on the same bus. The first thing I noticed there was the omnipresent mantra, etched on the seemingly unreachable mountain slope. I should be expecting it by now. But these lands always manage to surprise me. 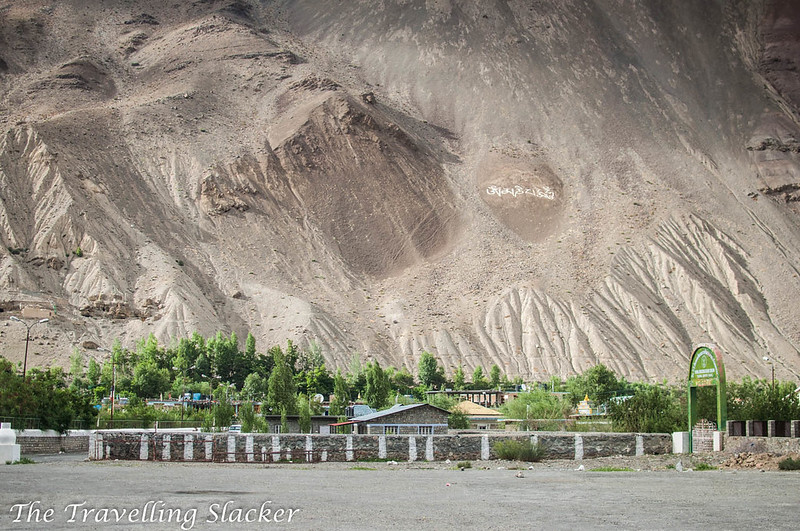 Several homestays I checked seemed to be already full. Apparently, the traffic in the Kinnaur-Spiti route has increased suddenly as the NGT has banned private vehicles on the Rohtang Pass. Finally, I settled down on Kesang Home Stay, near the bus stand, with a basic but spacious room and a common bathroom. 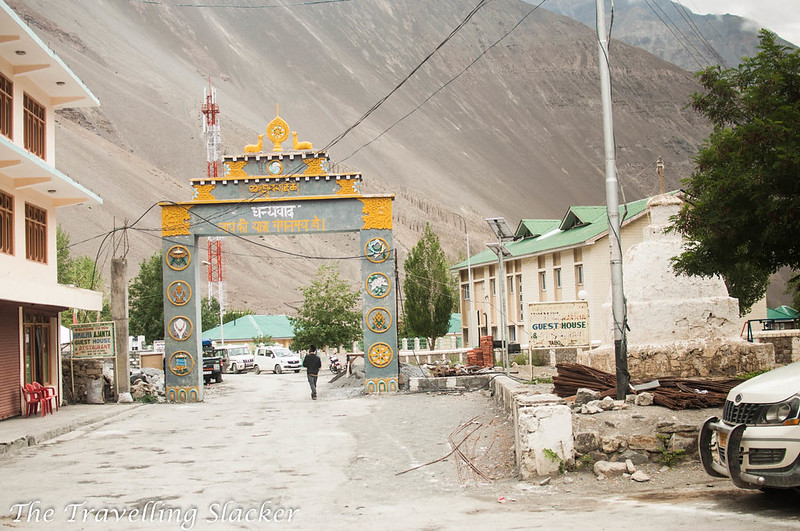 I soon realized that the town has been receiving an unusually big number of tourists. Americans, the French, and the omnipresent Israelites had occupied every available option. I was fortunate to get whatever I got as I saw some other people running around the town after dark, in search of rooms and in panic. The reason for this sudden surge is not sure but according to some people, the recent ban on private vehicles on the Rohtang Pass by the NGT has made more people to take the Hindustan Tibet Road and even some Ladakh bound people had opted for Spiti instead.

Back to the Monastery 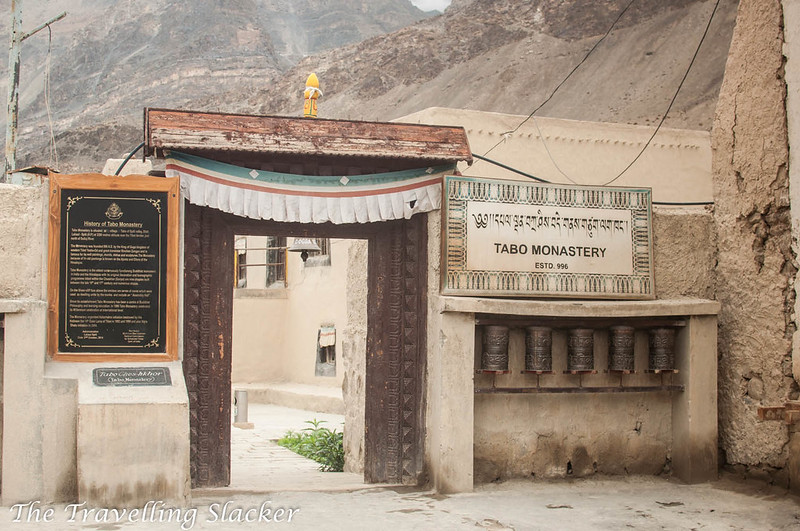 The next day, I first moved towards the ancient monastery. A new monastery has now been erected by the side of it along with a good ant stupa, but the old monastery remains a deceptively delightful structure. They look somewhat unassuming from outside, just a set of mud huts without any ornamentation. But as I’ve already mentioned, the exteriors do not prepare you for what is inside. Sadly photography is not allowed inside, for the protection of the delicate, 1000-year-old frescoes. I am sure I am not the first one to draw this comparison but yes, this is the Ajanta of the Himalayas. As for the artifacts inside these huts, I feel that my words are inadequate to describe their full impact. 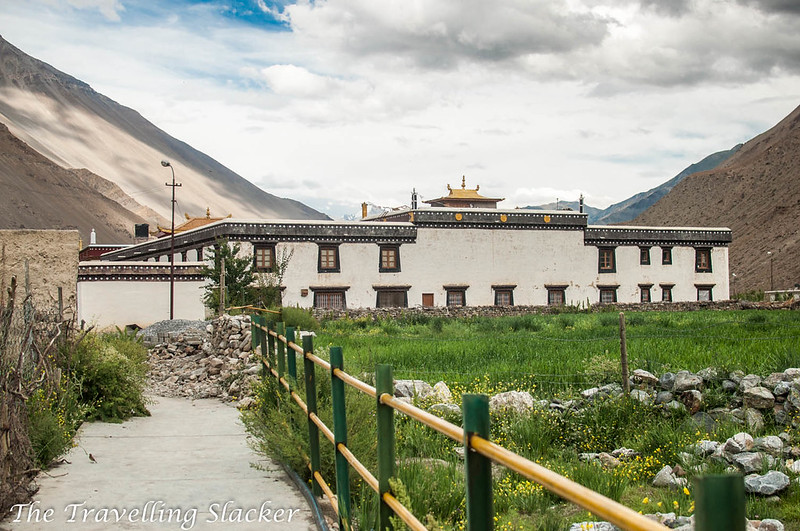 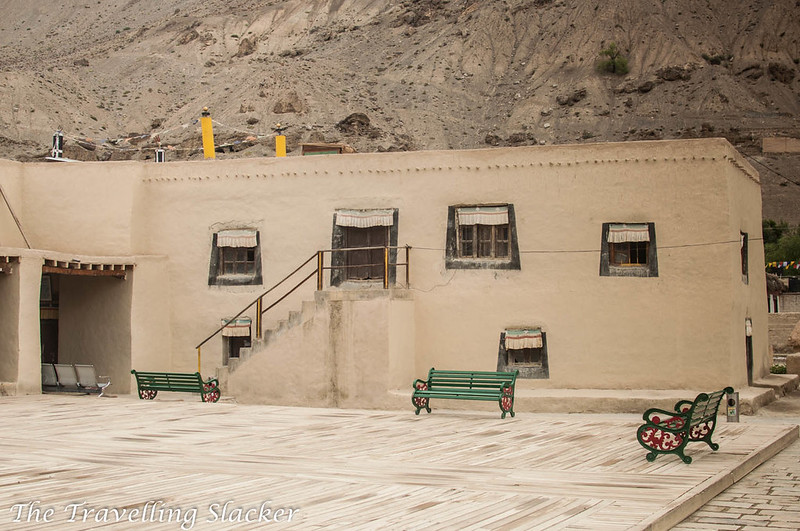 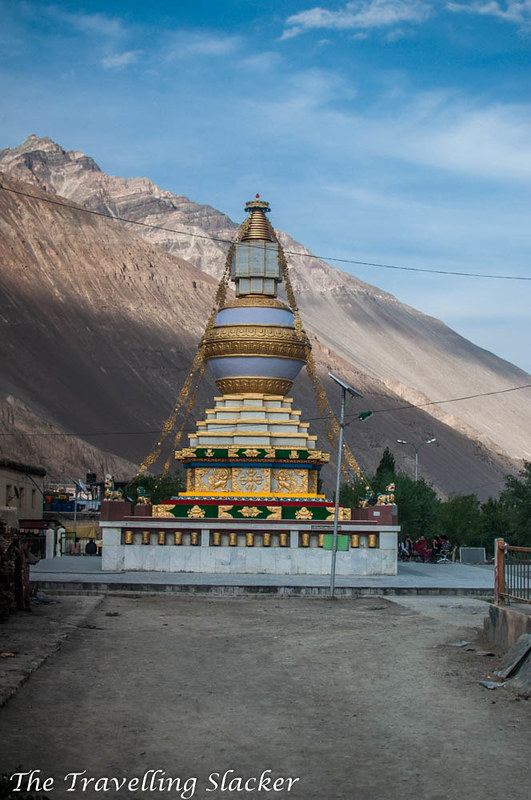 Those thankas and murals depicting jataka tales and scenes from Buddha’s life will take a lifetime to understand and decipher and with my limited knowledge, I should not be saying too much. The monastery compound in general is a serene place, mostly frequented by tourists to meditate alongside monks and cats. 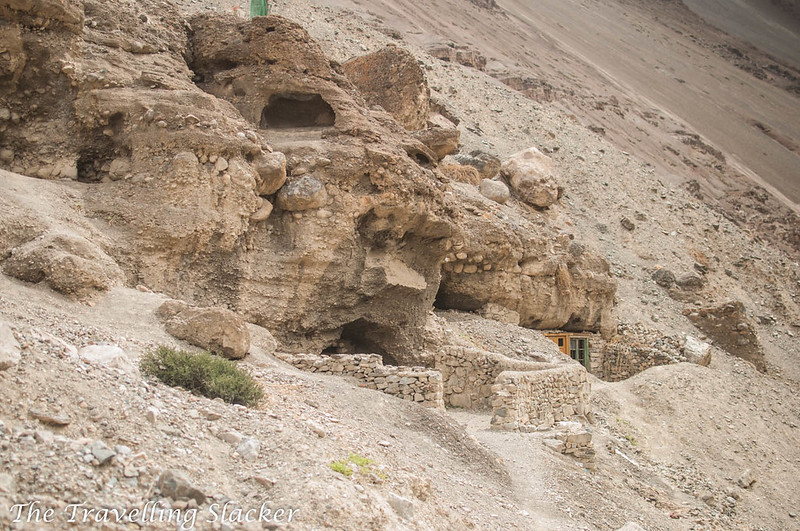 While roaming around the monastery compound, I noticed some strange formations on the nearby hills and soon realized that they were the famous caves of Tabo. They were possibly the extensions of the original monastery itself, places for the monks to live and meditate. So, I came out of the village and climbed the stairs along the hills to reach these caves. While these caves were probably natural formations, some of them had wooden doors and windows attached to them, probably for the senior monks. I was expecting more frescoes and sculptures here but these ones had none. The abode of the monks was supposed to be austere unlike those of the gods and prophets. However, I could spot the Spiti river sandwiched between the village and the steep mountains.

Although Tabo is situated on the bank of the river, it is neither seen nor heard from the center of the town. So, I wanted to have a closer look at the river and after some confusion, found my way by walking across the helipad and arriving at the edge of the village. 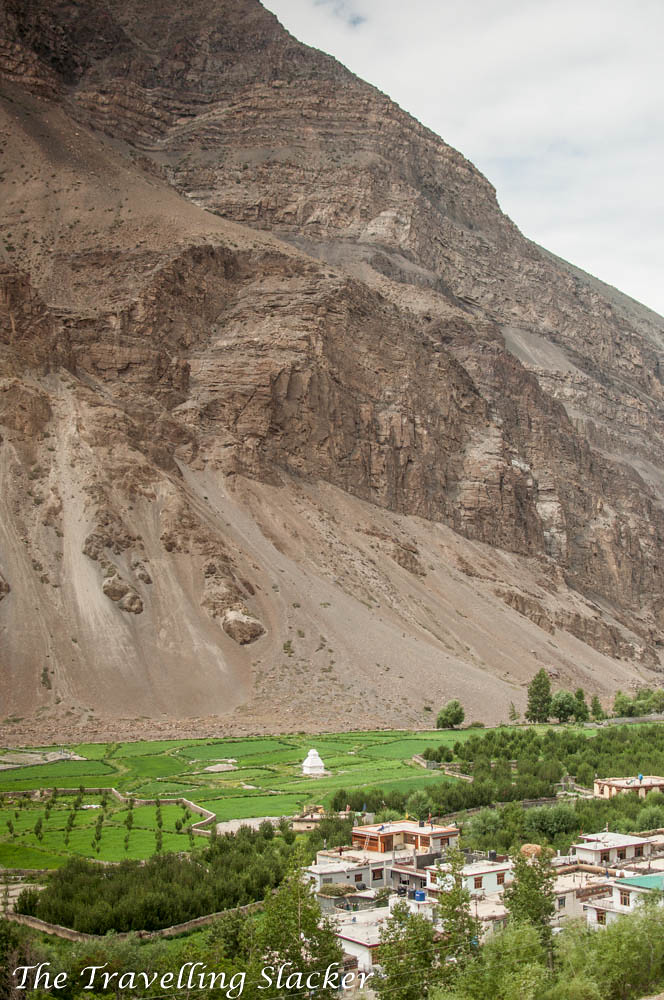 I spent the rest of my time walking around the village, and also beyond it. I realized that they are also adopting apple farming like the non-arid parts of Himachal. I also spotted a “dzo”, love child of a yak and a cow. But I was going to see more of them in the next few days, so will have stop, somewhat abruptly, as of now. Till then, just go through the remaining images. 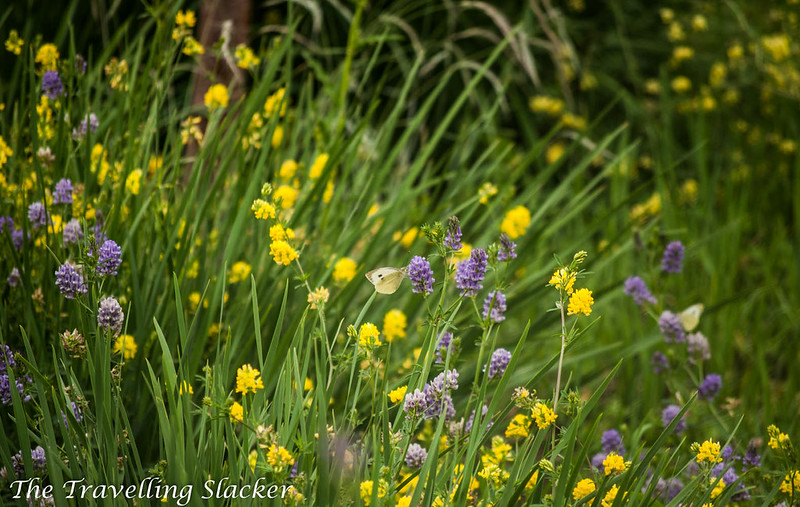 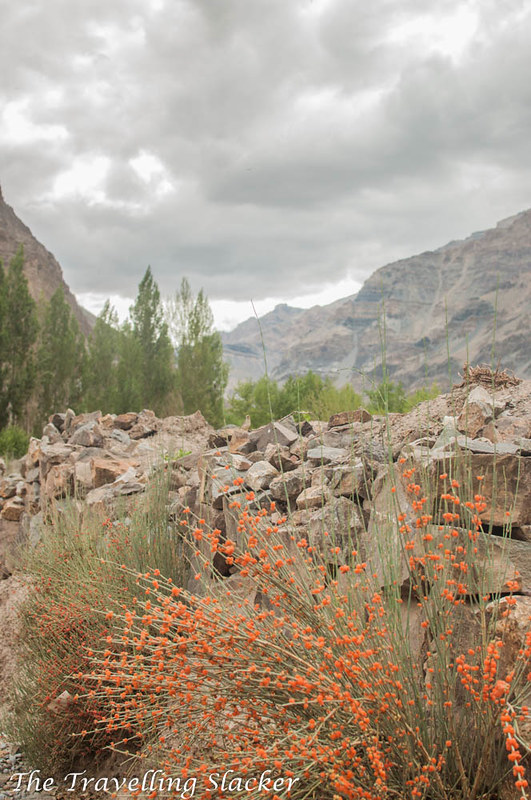 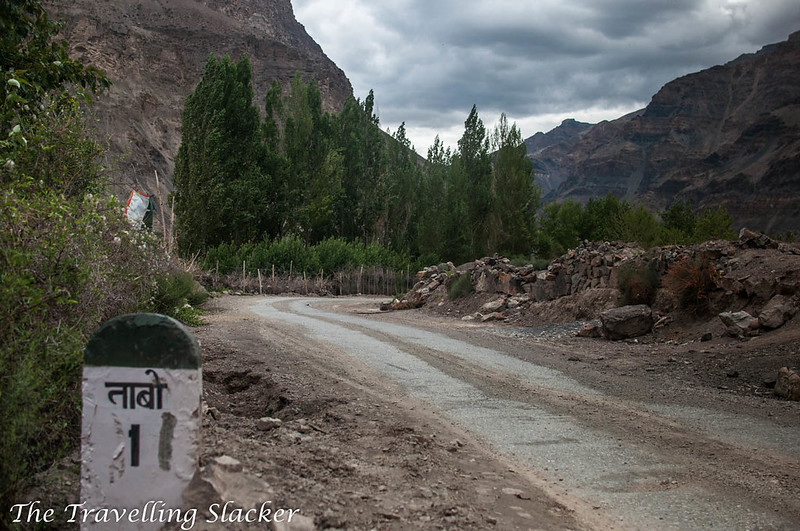 4 thoughts on “Tabo: That Museum in the Cold Desert”