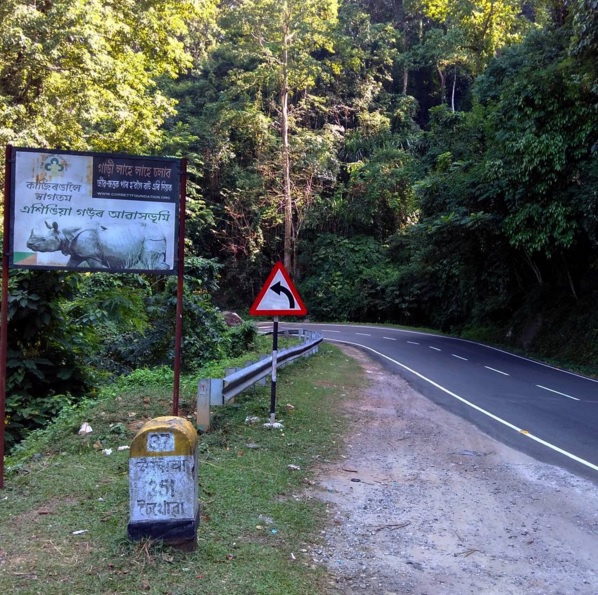 So, Kaziranga wasn’t that great for me. Nevertheless, it remains a major draw and the primary habitat for endangered one horned rhinos. So, here is are a set of simple FAQs for those who need it.

Where is Kaziranga Located?
Technically it is located in the Golaghat district of Assam. It covers a vast area of floodplains spread along the banks of Brahmaputra across the neighboring districts too.

Why should one visit Kaziranga?
It is the primary habitat of one horned rhinoceros. Apart from that it houses several large and small mammals, birds and reptiles. However, the sightings depend on your luck. There are tigers too but spotting them is not very likely. Rhinos should be generally visible though. But still, we saw it from a distance and the view was not very clear. Here is a different account that had a better sighting of the rhino in Kaziranga.

How to Reach Kaziranga?
It is conveniently located on the National Highway No. 37 (NH 37). From Guwahati it is close to 200 kms and personal vehicles should not take more than 4 hours. Even buses going to upper Assam pass through this stretch so reaching the national park is not really a problem. You can also hire cabs from Guwahati from any travel agent. You also inquire for packages at the Assam Tourism Development Corporation Building at Paltan Bazar, Guwahati (Although personally I find them exorbitantly priced). Phone: +91-361- 2633654/2738005

What are these ranges mentioned in various guidebook?
Kaziranga is divided into several administrative divisions called ranges. So, you must have noticed the names such as Bagori, Burhapahar, Kohora etc. The good news is that you do not have to bother about them. You generally pass them one after one along the road and in any case, you must go to Kohora where the main entry point is situated.

What are the accommodation options at Kaziranga?
It is the best known tourist spot in Assam, so there are enough options available including luxury resorts and budget hotels. Most of them are located around the main entry point of Kohora. Government accommodations are the most cost effective, but there is a huge demand for them. So, you will never get them unless you book in advance.

When does the Kaziranga national park open?
Kaziranga remains open for six months like most other parks in India. It remains closed during the rains and officially opens on the 1st of November and generally remains open till the end of March.

What is the right time to visit Kaziranga?
Ideally the migratory birds can be seen in high numbers in December and January while other species remain the same. The temperature should hover around 10-15 degrees at that time.

What are the jeep and elephant safari charges at Kaziranga?
The jeep Safari costs around 2000 per trip and barely lasts a couple of hours. One jeep can accommodate 4-5 people, so the costs can be shared if you are in a group. Elephants cost slightly more than 500 per head and they last barely an hour, although they can get closer to the animals without alerting them. Especially if you want to have a closer view of the rhinos, elephants are the way to go.