I dragged myself, defying the blazing sun and all the physical limitations induced by my nonexistent fitness regime, to finally reach a point high enough to experience the full glory of the confluence of Spiti and Pin Rivers and their glittering floodplains. The Dhankar Monastery was looking glorious, but it was still far away. Floating clouds were casting moving shadows on the distant plains but not over my head. With such views in front of me, I should have felt like gods but with all the physical exertion, I was feeling like a mule (PETA disclaimer). 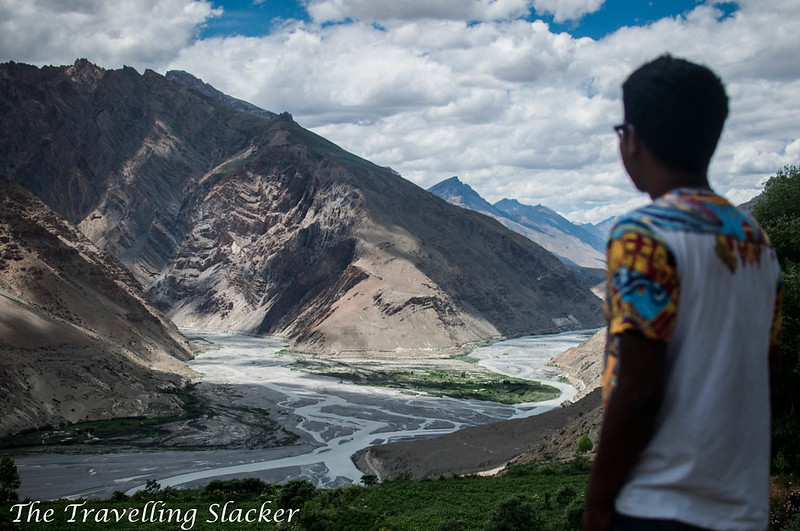 The previous night, I explored various options for reaching Dhankar but at the end obviously opted for the least expensive option. I was told that a local Kaza bound bus will drop me at Shichilling, from where generous locals will give me a lift. So, the next morning I reached the bus stand at Tabo but the bus was nowhere to be seen. There were many foreign tourists waiting there too but they lost patience and decided to pay extra and hire a car. But I stayed back, along with Mike from New York, who was on his 3rd India trip. He apparently returns to countries after decades to see how they have evolved. The bus finally arrived at around 10:30 am and left us at Shichilling after an hour. That place has a few small restaurants and even a homestay. The road goes towards Kaza but a small diversion ascends towards Dhankar. In fact the village and the monastery can be seen from the road itself. Mike and I decided to start trekking along the road and ask for lift whenever they arrive. 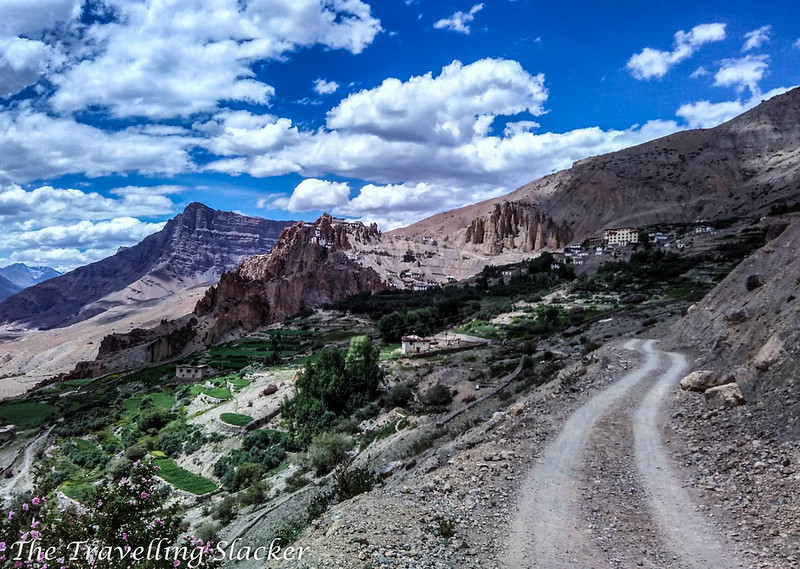 It was a bright, sunny day and due to the late start, we ended up trekking at high noon. As it can be expected in a desert, there were no trees and not even a man-made structure providing shade. I used up my water reserves soon. Actually, I deliberately did not carry much water to lessen the weight of my backpack. Anyways, after a couple of hours of trekking, we reached the aforementioned vantage point. The views were rewarding, especially the wild roses, but it was tiresome and we were only halfway through. 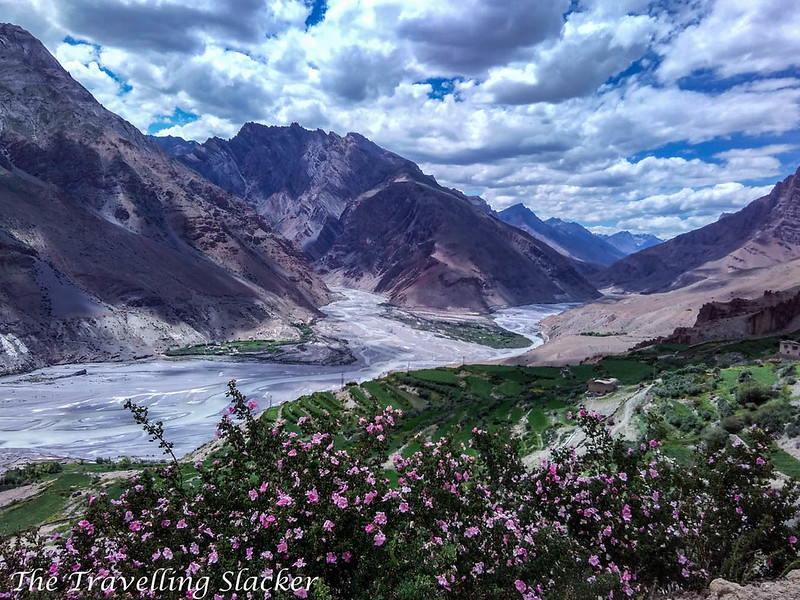 We did not come across any local vehicles going that way. Here I must mention that the road has been newly built and pretty smooth. We saw some tourist vehicles, already packed with people, generally packed with close-knit tourist groups, probably families, who couldn’t care less about us. We extended our thumbs and they gave us figurative middle fingers. I have always sucked at hitchhiking anyway.

We reached the village at around 4 pm and looked for a place to spend the night. The first one we came across was a reasonably big concrete building with all the facilities. But it was sticking out like a sore thumb in the otherwise medieval setup. Besides, it was surely not owned by the locals. We did not want to pay some random guy, probably from Delhi or Bombay, when the poor natives required it more. So, we went ahead, an eventually stumbled on a young local guy who called himself Tenzin and claimed to have rooms and quoted INR 400 for a nigh including 3 servings of food. I don’t remember the name of the homestay or probably it had no name. But the rooms were cozy although the placed lacked a proper bathroom. But for a night it was manageable and we had the satisfaction of helping out a local family living a hard life. He served chow-mien and tea and we dozed off for a while after all the hard work.

We got up after 6 pm but it was still pretty bright outside. So, we decided to visit the Dhankar Monastery. This gompa is also around 1000 years old, just like the one in Tabo. But what sets it apart is the setting. It is precariously located atop a very steep and narrow cliff, just somehow hanging in there. I wonder how it even survived a millennium! But I am not the first person to think so. In 2006, World Monuments Fund included it as one of the 100 most endangered sites in the world. 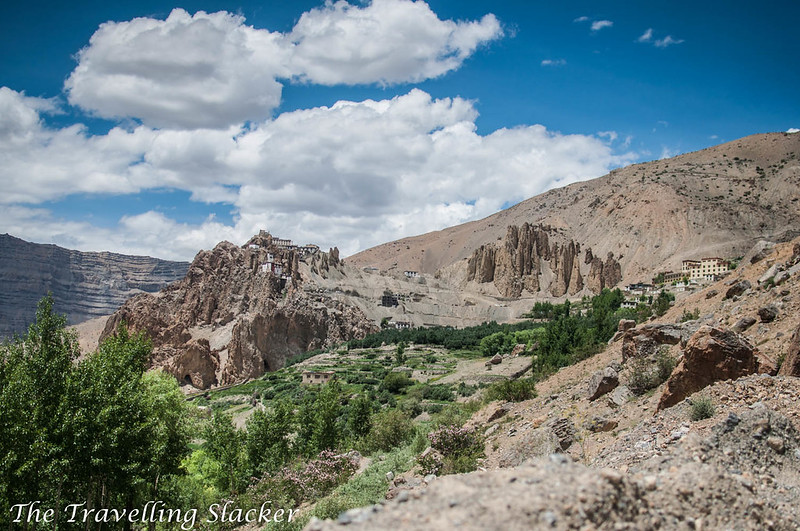 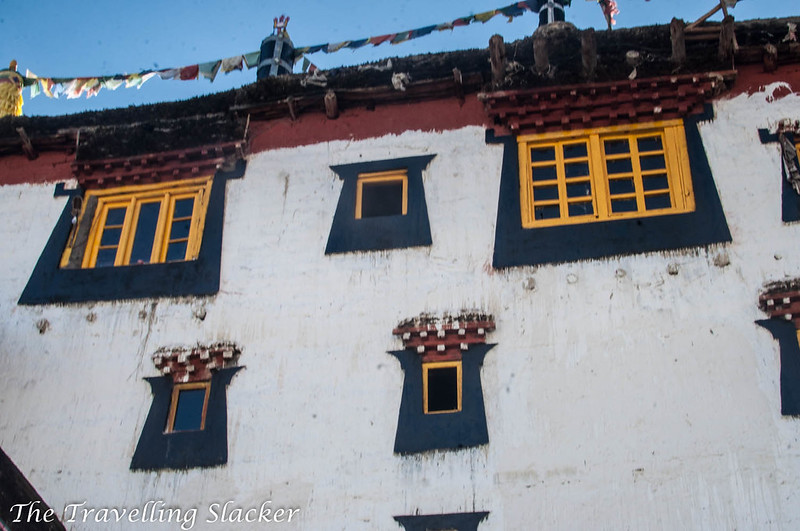 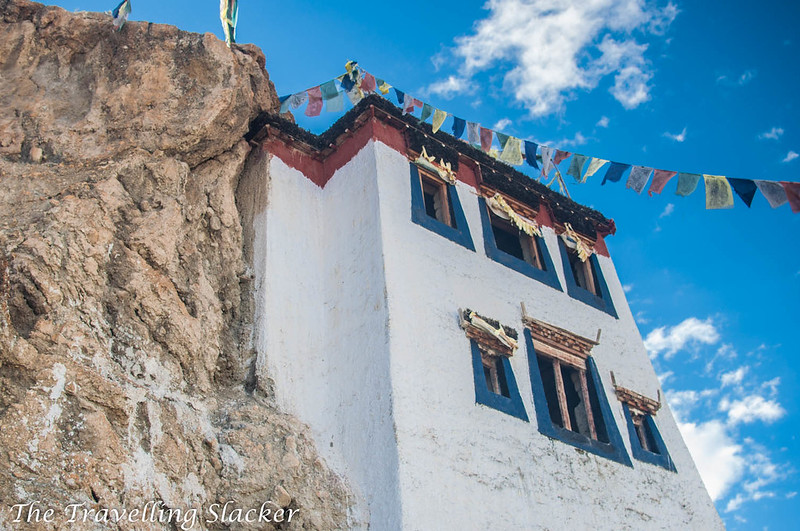 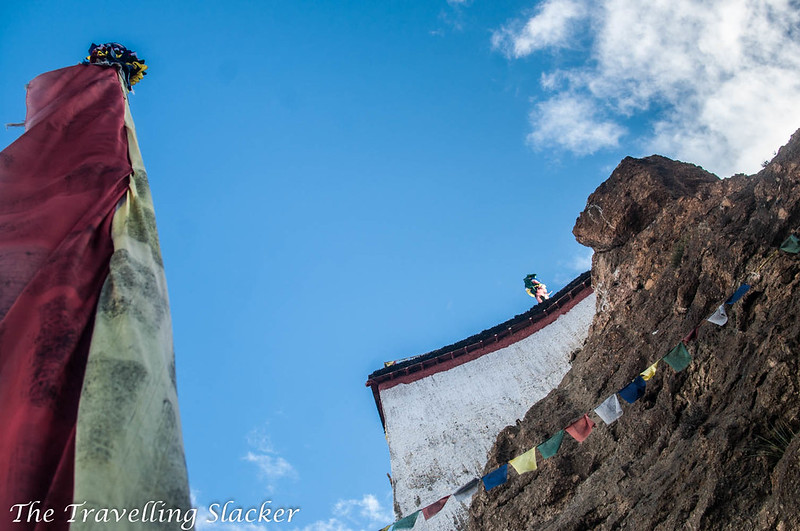 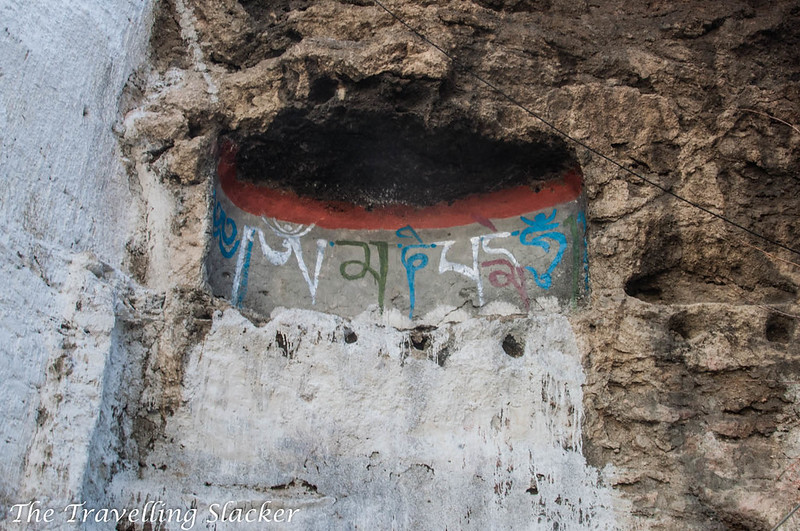 It is also built more like a fort. Probably the geopolitical compulsions back in those times necessitated it. We went in, visiting floor after floor for dark rooms filled with intricately drawn “thangkas” that I was not knowledgeable enough to decipher. At the topmost floor, we met the resident monk who was in charge. Among other things, he mentioned that unlike Tabo, this monastery is not receiving much help from the government and the conservation and renovation efforts are done with the money collected through donation.

Two things particularly attracted my attention, a large, stuffed ram and more importantly some tridents with happy emojis on them. I think it depicts Tibetan Buddhisms’s deep Tantric roots and Indic connection but I wish I could study more about this subject. 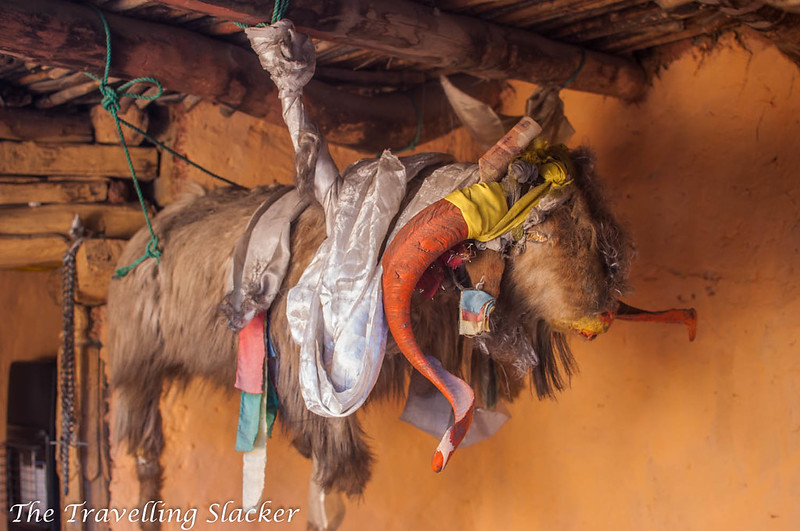 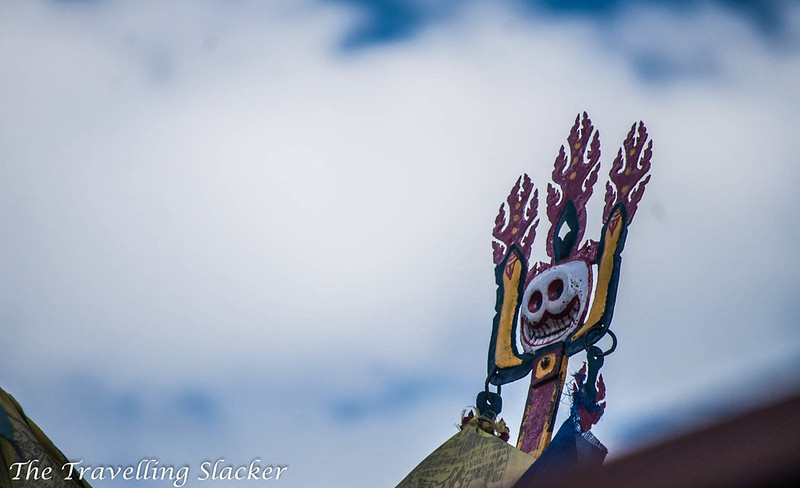 We came out and clicked a few more photographs of the village and the river from the top. It was past 7 pm but still pretty bright although the shadows were getting longer. 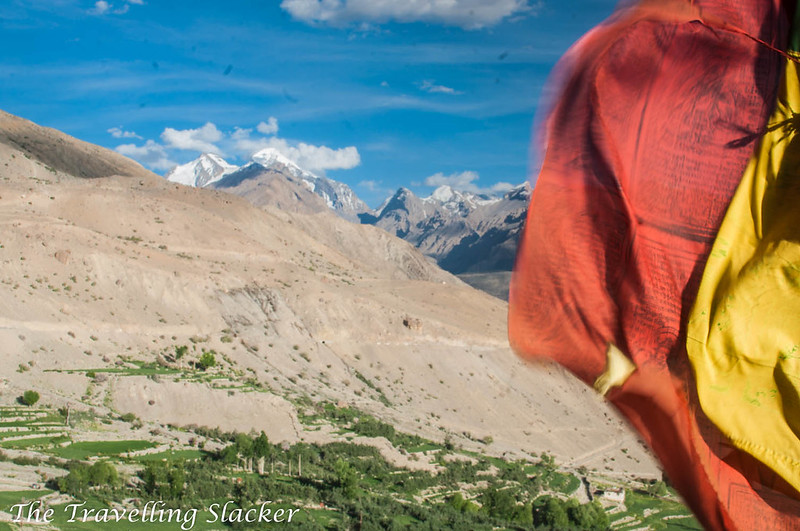 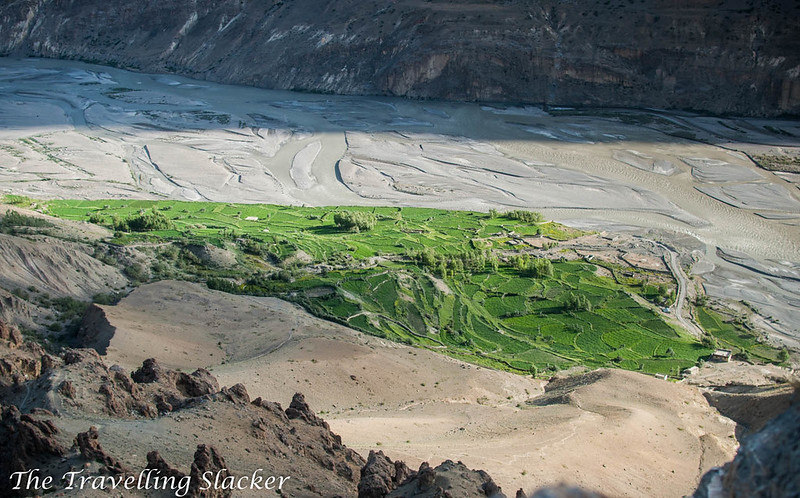 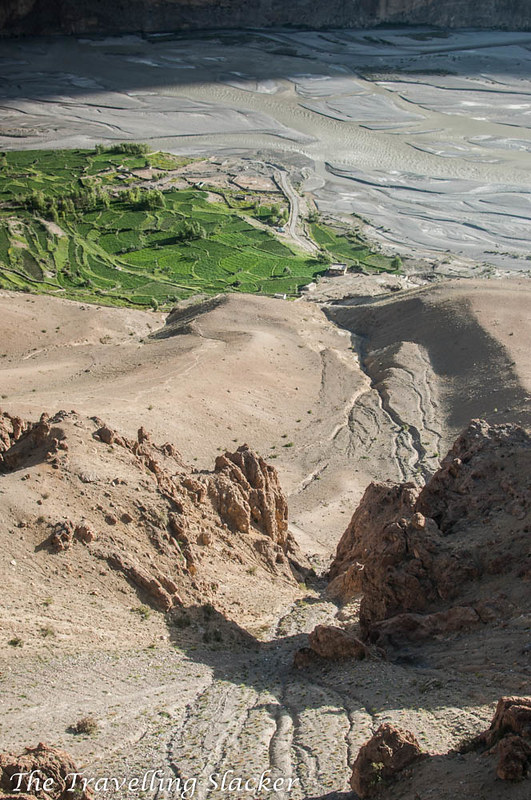 We started looking for the Dhankar Fort, which is apparently even older than the gompa. It was the original power center of Spiti, when Dhankar used to be its capital in the ancient times. As of now, it is an abandoned mud and brick structure with wooden staircases. However, one can still go inside and climb up to the terrace. It is even higher than the monastery and offers 360-degree views of the village and the valley. 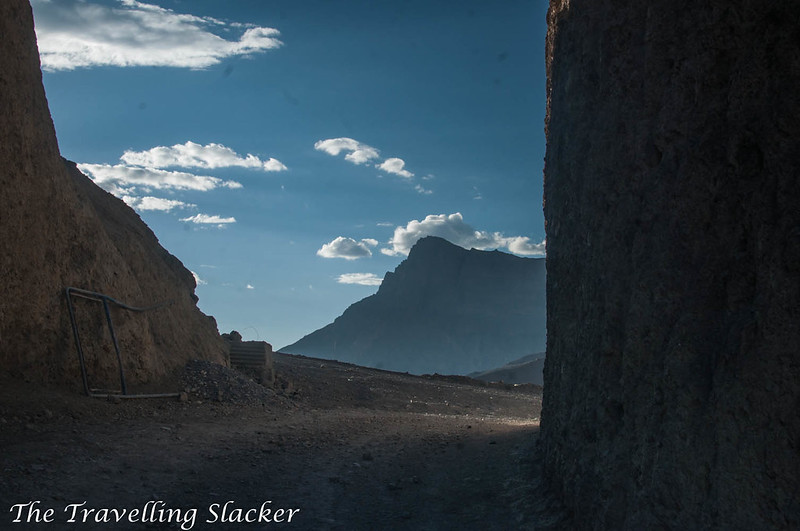 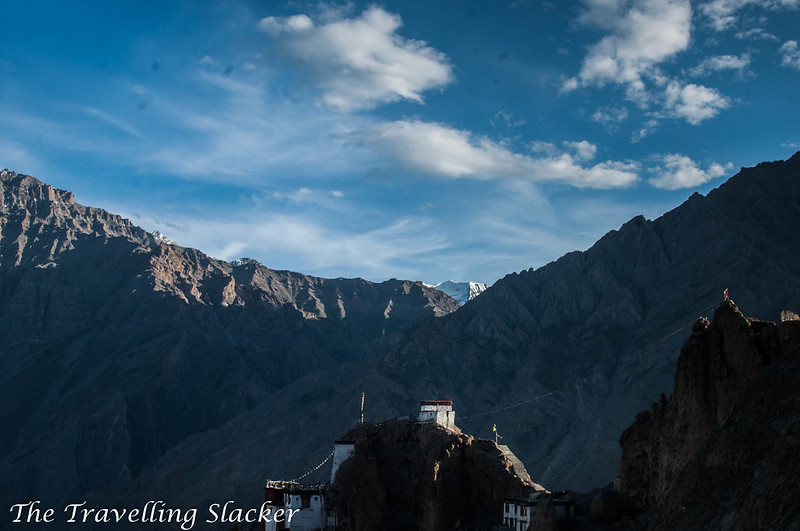 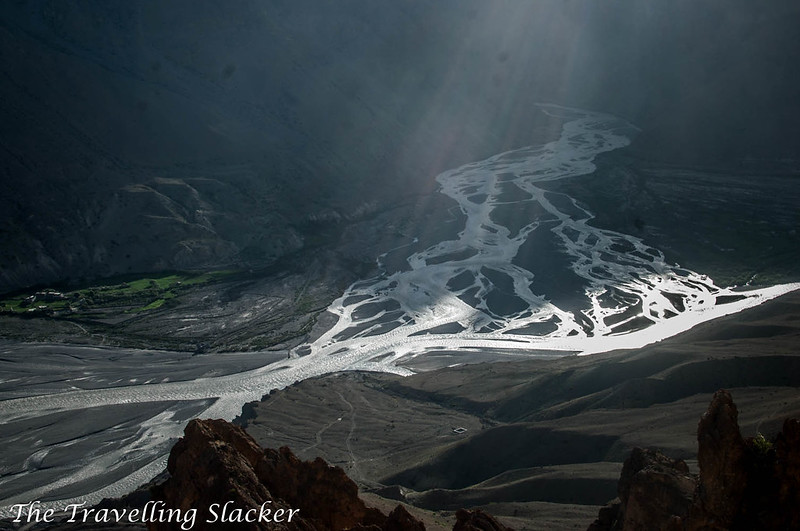 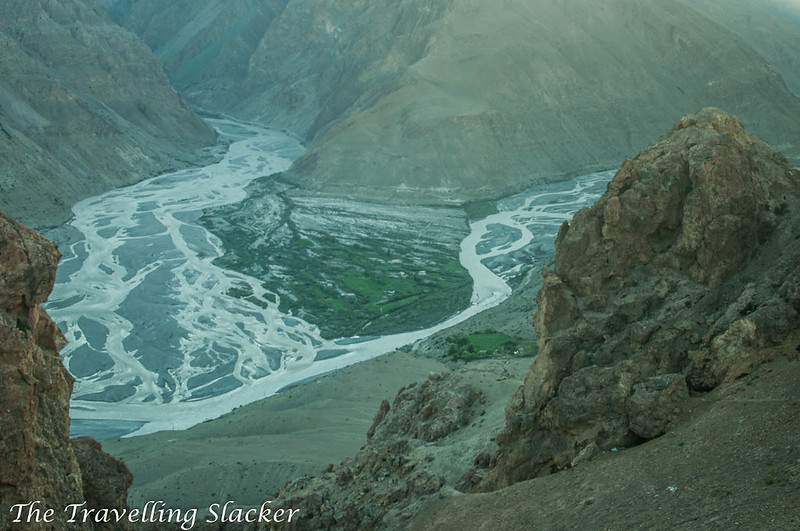 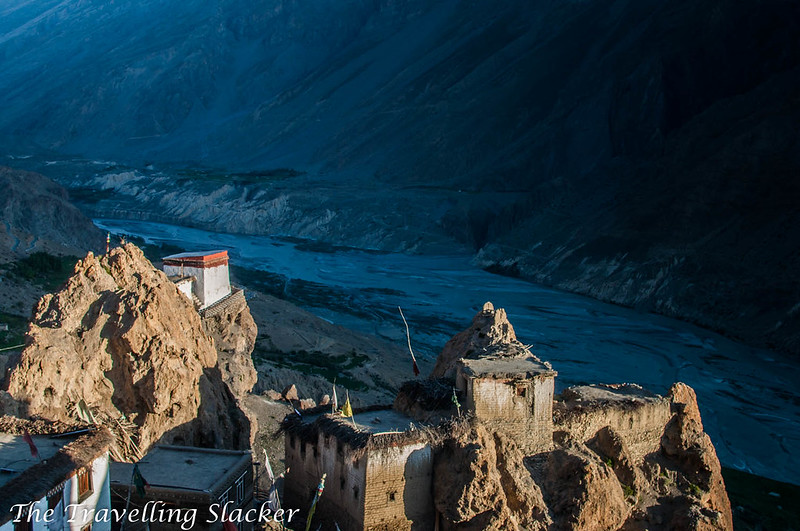 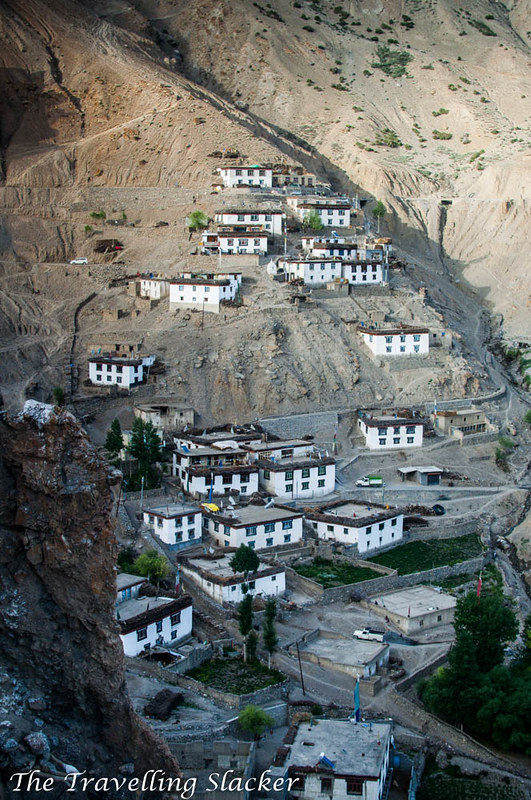 That night, we realized soon that the village does not have regular electricity (or at least our place did not have). I was feeling sleepy but Tenzin informed that the dinner is ready. Mike gave up and fell asleep but I thought since they had taken the trouble to cook it, I should try it. He led me to the vast open dining room that also had light, probably with the help of a generator. The room was full of dragon imagery including ones on the wall that he claimed to have painted himself. There was also a stuffed fox that apparently had to be eliminated as it was eyeing their precious cattle. Now it hangs by the side of a framed, smiling photograph of Tenzin! 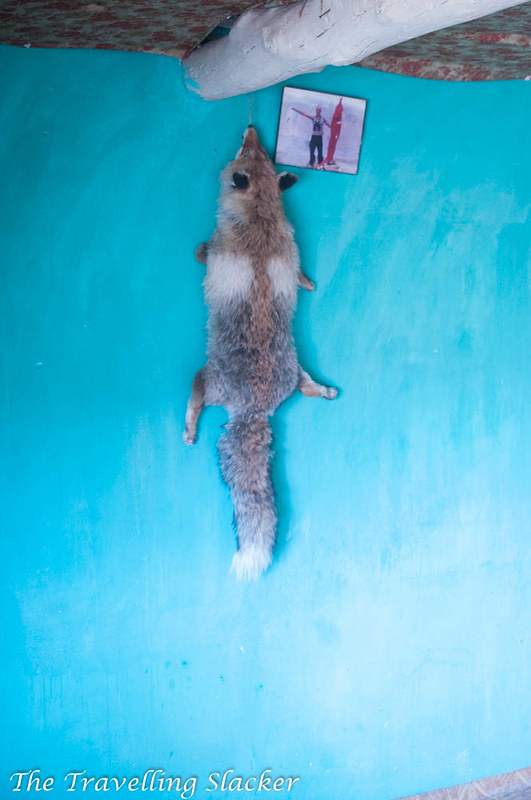 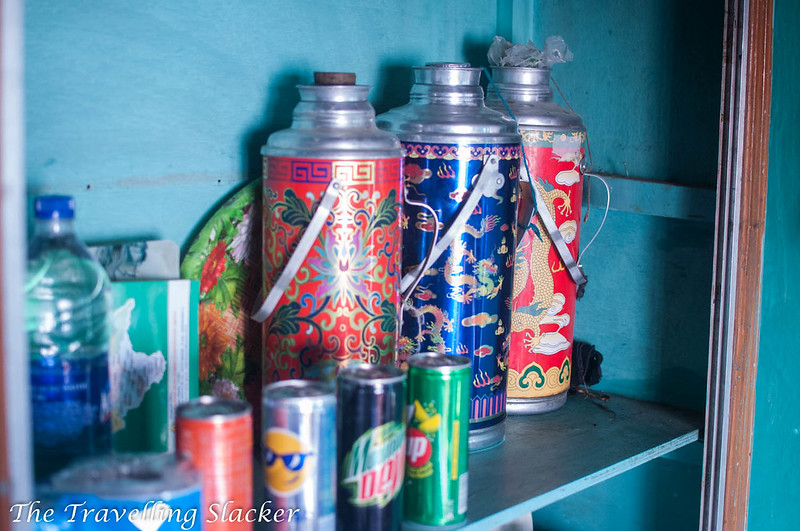 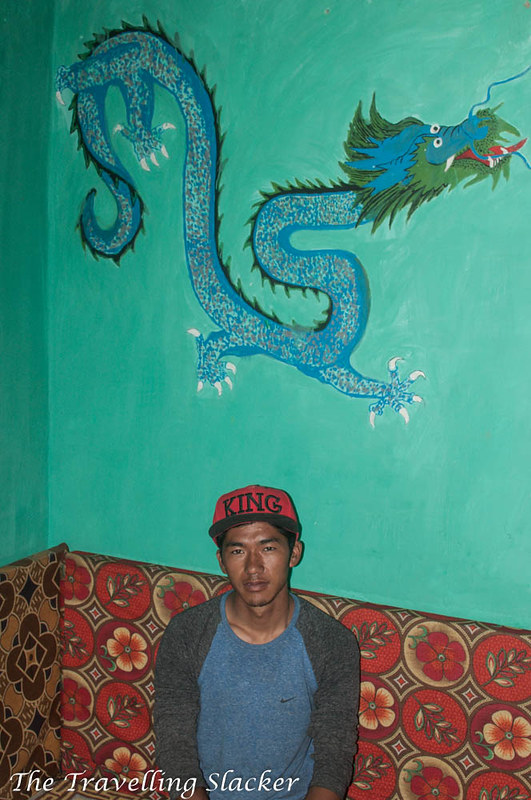 Then he brought in the food, basically a plate of momos and a bowl of clear soup. This low light, phone image does not do justice to it. Now, this momo was completely different from what I am used to. It was made of local flour which had a rough texture. The filling was mostly of local potatoes. Those were the best momos I’d ever had. And the bowl of coriander soup, I felt, worked like an aphrodisiac. So, I did not ask for more even though I wanted to. He did not reveal the full recipe of the soup though. 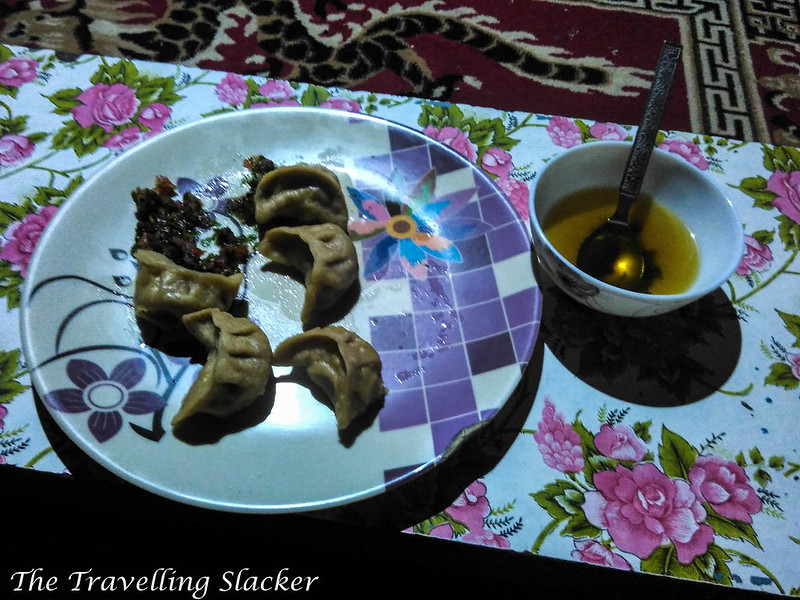 Dhankar, in a sense, remained the high point of my Spiti trip, with later parts of the trip going haywire due to various reasons. Nevertheless, this remains my finest experience of witnessing an ancient Tibetan monastery in a cold desert and I must visit those in Ladakh to match up to this experience. Till then you can read this post about some of the most ancient monasteries in Ladakh by fellow travel blogger Lakshmi.

The next morning we left soon as there was a guy leaving for Kaza on his car agreed to take us. I wanted to visit the lake which is a short hike above the village but I was yet to recover from the previous day’s trek. But I can surely return here again and complete that part, probably this winter. Now that would be something really hardcore!

How to Reach Dhankar

The road to Dhankar Village and Monastery starts from a small settlement called Sichling, which is on the road between Kaza to Tabo, around 24-25 KMs from both sides. From Sichling the road to Dhankar is around 8 KMs and it gradually ascends towards the village.

Is the Dhankar Road Motorable?

Yes, it is completely motorable from the diversion at SIchling to the Dhankar Village at the top. However, there is no public transport like bus to the village. So, you need your own vehicle, or ask for lift, or end up hiking the whole distance like I did.

Catch the Kaza to Peo bus at around 7.30 AM and reach Sichling in just an hour or so. If you are coming from Tabo, look for Sumdo-Kaza bus, which reaches Tabo at around 9.30-10 AM (Most people don’t know about the second bus). That should also leave you at Sichling in an hour or so. From Sichling, hitchhike or just hike.

Things to do in Dhankar

Like any other place in Spiti, people came here for the sheer views than any specific attraction. Nevertheless, there are three specific points here at DHankar in case you need.

Homestays and Hotels in Dhankar

Dhankar Village has many hotels and homestays. Many families have converted their homes to homestays while a couple of mainstream hotels have also cropped up near the village. The hotels have all the modern faciltities but it will be run by some outsider and you will not get the intimate experience of staying with a family. Homestays are what I support although they maybe lacking some facilities you are used to, such as modern toilets and electricity. But I guess for one night, you can manage it like I did.

Phone and data connectivity in Dhankar

BSNL SIMs should work for calling. Don’t expected anything else. Data connectivity is a far cry.