I was (and still is) a cinephile even when I wasn’t a traveller. Celluloid has kept me occupied for pretty much my entire adult life. Over the years, I have also realized that most people love trains like I do. I mostly take trains unless they are not available (One of my deepest regrets is that most of the Himalayas are not accessible by trains). Sometimes I also have to take them due to my poverty but let’s not discuss that here. They represent history, they represent tradition and they also represent the fact that one doesn’t have to burn a hole in their pocket to have a good night’s sleep while travelling, especially in India. And yes, I never enjoy that weightless feeling on the planes, nor do I enjoy the cramped “Delux” buses.

I have been thinking about making a list of my favourite travel films or road movies for the past few weeks. But after ruminating for a few days I realized that I have seen far too many films to justify only one list. So, I am thinking of making it a long series with several lists of different types and genres. This is the first list of this series and this is dedicated to trains. Except one, the rest of them feature locomotives, another achingly nostalgic element of a bygone era.

Please note that the list is based on what I have seen and I am sure there are other films. I have also made an effort not to include some very familiar and very recent films because most people must have seen them already.

This is of course a no brainer, a default entry to all such lists. It has been more than 80 years and even with all the modern CGI and colossal budgets, nobody has been able to surpass this Buster Keaton masterpiece so far.

What is it about?
A down on luck young man is generally considered a coward and a loser. But this is the time of the American Civil War. So, when the enemies kidnap the lady, he chases them alone.

Why watch it?
It is simply one of the best chase movies ever. Buster Keaton’s antics may make you laugh but you must note that those were real stunts and some of them were seriously risky. If there ever was comedy capable of pumping adrenaline, this must be it. At its heart, it is also a great underdog story that never fails to charm.

Kray (The Edge) is a Russian film by Aleksei Uchitel set in post war Siberia.

What is it about?
Just after the World War II, a Russian soldier arrives at a Siberian Labour camp. He is still nursing the psychological wounds of the war. But in those rough terrains, one cannot just let things be. He has to fight again, this time with his own people, and the train becomes a metaphor for life as well as its meaning.

Why watch it?
A race of locomotive engines in the Siberian hinterlands full of brittle bridges and of course bears. Can there be a more epic setting?

How can Hitchcock be left behind in this kind of a list and for that matter any list?

What is it about?
Two people meet on a train. They need to eliminate some close relatives. It is too risky and they will be the immediate suspects. But what if they hedge the risk simply by exchanging the murders?

Why watch it?
It’s a typical noir thriller by Hitchcok. Crime, drama, suspense, twists, everything you ever wanted in a thriller… and yes it all starts on a train.

One more Hitchcock! I thought I will not keep two films by the same director. But I could not really ignore this one.

What is it about?
While traveling across Europe by train, a beautiful lady meets an old spinster, who subsequently disappears from the train. She investigates, and a guy joins in too. Soon, it turns out that there is much more that what meets the eye.

Why watch it?
It’s an excellent thriller but Hitchcock also maintains a light, humorous streak throughout the film. It is probably one of the best espionage films ever made.

The more I watch newer films, the more I realize how much I love those black and whites. I think this classic Sternberg-Dietrich film represent quite a lot of elements that I love about that era, those films and beyond.

What is it about?
The prostitute named Shanghai Lily is travelling to err… Shanghai, on a train called the Shanghai Express. But the rest of the story is not that obvious. She meets her ex, who soon finds himself in trouble. Can she help? Or more importantly, would she?

Finally I have been able to include an Indian film here. Ray showed us how to shoot locomotives in his first film itself. But with this one he gets inside the train

What is it about?
A reigning film star travels to Delhi on a train to receive an award. He meets and interacts with some fellow passengers including a beautiful journalist, and slowly many unknown chapters of his life are revealed.

Why watch it?
It may somewhat remind you of the Wild Strawberries template but Ray turns it into an incisive study of human character and the toll celebrity takes on people. And the journey of a lifetime by the character is summed up in the short span of a train ride.

There are people who detest Kusturica for his political bent but no one can deny his ability to compose striking surreal imagery and small moments of joy with equal panache. With his absurdist humour and quirk, I think he is the most entertaining filmmaker of the present generation.

What is it about?
It is a story is set right at the time of the Balkan civil war. While the family is torn by circumstances, a seemingly improbable yet gratifying cross border love story blossoms.

Why watch it?
The film offers a generous dose of Kusturica’s trademark absurdist humour and of course the principal character is an engineer building a railroad. But what is interesting is that he built an entire village for shooting the film. It is called Drvengrad and it is not merely a set but a full-fledged locality where the director has been apparently living since then. If I someday make it to Europe, this place is will surely be on my list.

I had to include something seriously indie, and who is more indie than Jarmusch?

What is it about?
Two young Japanese tourists, an Italian widow, and a British immigrant ride a Mystery Train and arrive at Memphis. They all have their backstories and some of them converge.

Why watch it?
The train ride eventually leads them to the American hinterlands, the smaller towns and not the overwhelming metropolises. The Japanese travellers are on a musical pilgrimage to the homeland of Elvis Presley. What about that as a travel idea?

Somehow I keep going back to the Russians. Here is another one!

What is it about?
A young soldier, after some heroic action, gets a few days leaves to meet his mother. But he meets a damsel in distress on his train. Will they be able to overcome those hostile circumstances?

Why watch it?
I havn’t seen any other film by Grigori Chukhrai but I think he just knows how to make a universal film even when suffocated by state control. Its intense humanism elevates it from being just another war movie or a mere teen love story.

This is the only film with a contemporary plot and this isn’t exactly a steam locomotive. Nevertheless, the Transsiberian is a train that I aspire to take someday. So, this one had to be there.

What is it about?
An American couple takes the Transsiberian train. Initially everything looks fine but soon they figure out that their co-passengers are not exactly who they seem to be.

Why watch it?
It is just a staple new age thriller from Brad Anderson (Who once made Christian Bale look like a Skeleton in the Machinist). But I just love the Siberian terrains and of course the train.

And finally, let me sign off with a few of my favourite train action sequences. I did not include them in the main is as these sequences only form a very small part of the films. And all of the turned out to be westerns of different kinds.

The Good, the Bad and the Weird

Khimchi Western… as good as it gets…

How the West Was Won

Well I did not find the exact scene I wanted to share… anyways this trailer should help and more importantly a much better restored version is available nowadays. 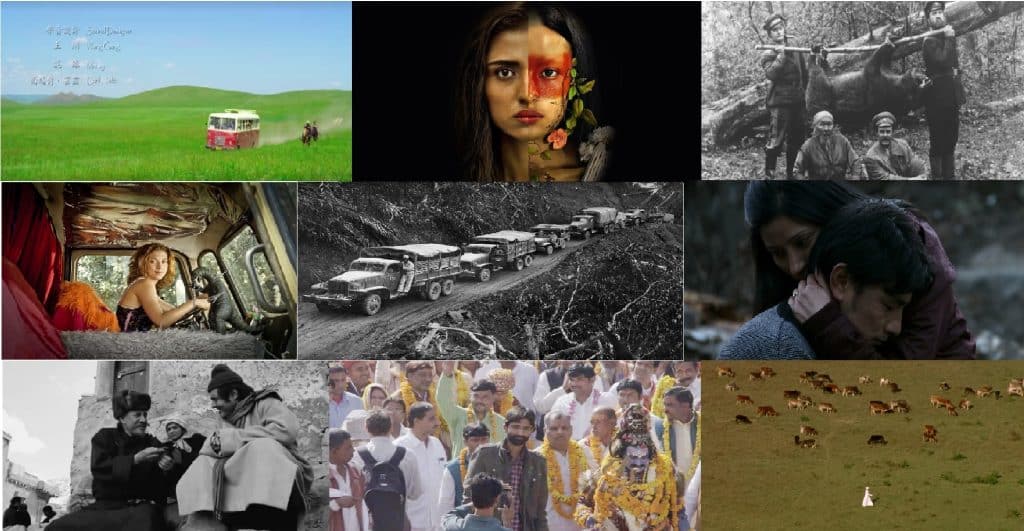 4 thoughts on “Romancing the Locomotives: Top 10 Films shot on a Train”