Pushkar is one of those places that perfectly display the inherent contradictions of this country. A small town deep in the heart of Rajasthan and on the edge of the Thar desert, and that too an extremely religious one to begin with, is not expected to be another of those promised lands in India akin to Kasol… But it is! 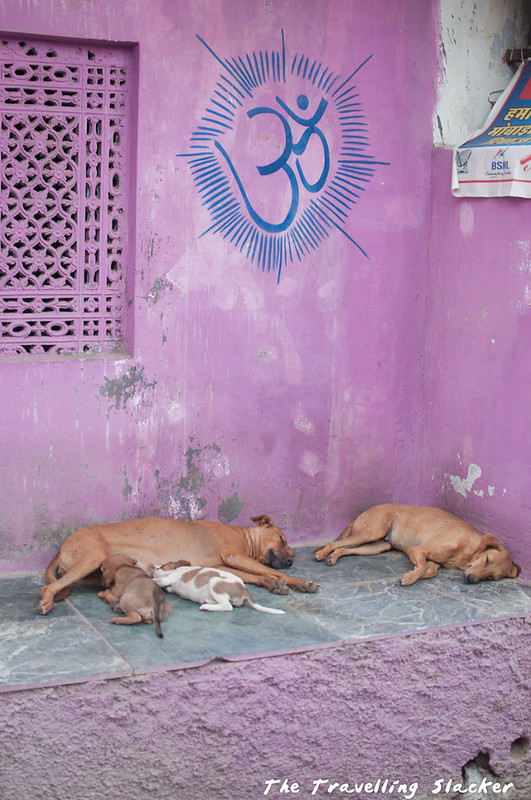 However, the cooler portions of Pushkar are the ones surrounding the eponymous lake. Rest of the town does not tell you what is in store as you approach it although hotels and restaurants dominate the landscape. However, i am saying these things only on hindsight. I did not have much clue about the geography when I reached Pushkar and I left the bus just as it entered the city near a place called Ramdham. I followed the road signs and slowly entered a crowded area. As it was the peak season due to the cattle fair, the first few hotels turned out to be packed already.

Finally, I found one, basically an old “haveli” turned into sort of a lodge and way overpriced at 700 for a no-frills room. But I was tired and not sure if anything else will be available on the penultimate night of the Pushkar Mela which also happened to be a Sunday. So, i took the room but started to regret it soon. Even the bathroom was located away from the room and they asked me if I had an empty bottle when I asked for water!

I ventured further into the city later on and discovered the area where most of the tourist-friendly hotels were located. I ventured into a restaurant fool of foreign visitors, that claimed to serve Middle Eastern cuisine to feast on my disappointment as well as on some hummus. The food was decent and I felt better after that and decided to just meander without any purpose or destination.

I kept walking along the crowded street, without even realizing that I was so near the famed lake. The banks of the lake are so densely populated that the lake is barely visible from the ground. Only a line of buildings separate the street from the lake but realized it only when I noticed a small opening between two buildings, which turned out to be a ghaat. I sat there for a while, watching the inverted Pushkar skyline of the night. 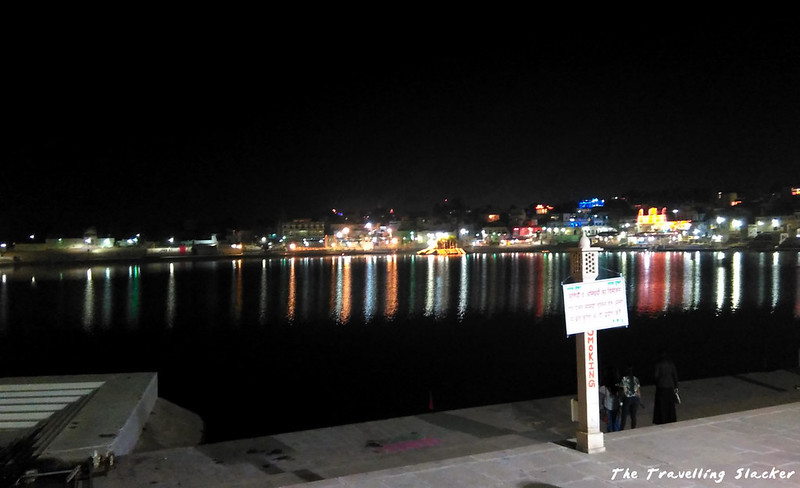 The rest of the city turned out to be more of a food hub. From local sweets and usual Indian affairs to the cosmopolitan joints offering Middle Eastern, Tibetan and Italian cuisine, everything was available, although mostly vegetarian versions, considering the religious nature of the city. As I walked along, I came across temples after temples but they were so crowded that I could not get into anyone of them. I kept walking and eventually reached the Mela ground, full of camels and more stores of food apart from some usual handicraft and apparel shops targeted at tourists. The fair was complete with large Ferris wheels and other familiar installations. I even saw a paintball arena of all things. It was already too dark for exploring the actual purpose of this fair, the animals. So, planned to come back in the morning again and returned to the town. Some more exploration exposed me to more ghaats around the lake and interesting graffiti all around the town. Clearly these artwork are pretty decent additions but they seemed to go well with the mythical aura of the place. 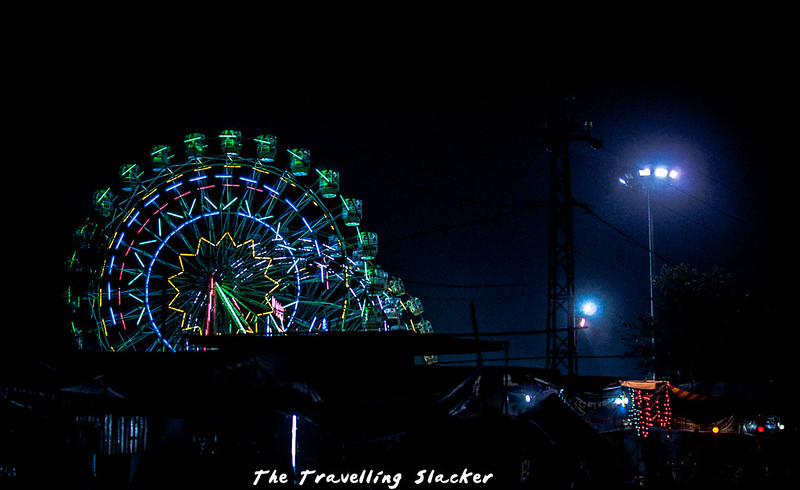 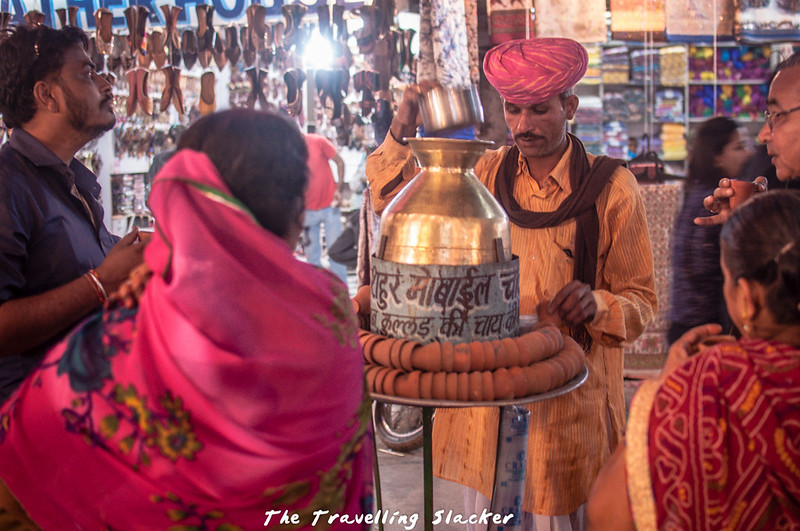 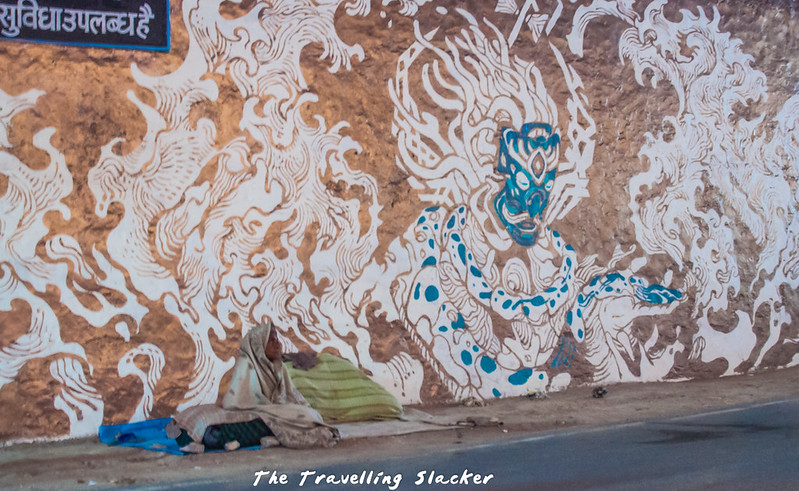 I checked out of the hotel in the morning and looked for a good breakfast place. After some loitering around I zeroed in on Laura’s Cafe, apparently run by some people from Israel. The Breakfast for Champions was good, as you can see, but more importantly, I got a clear view of the lake and the temples around it from the rooftop and finally had a clearer understanding of the structure of the city. People completing their morning ablutions on the ghaats were visible too, along with the processions of devotees along the narrow alleys and people showering flowers on them from the rooftops. 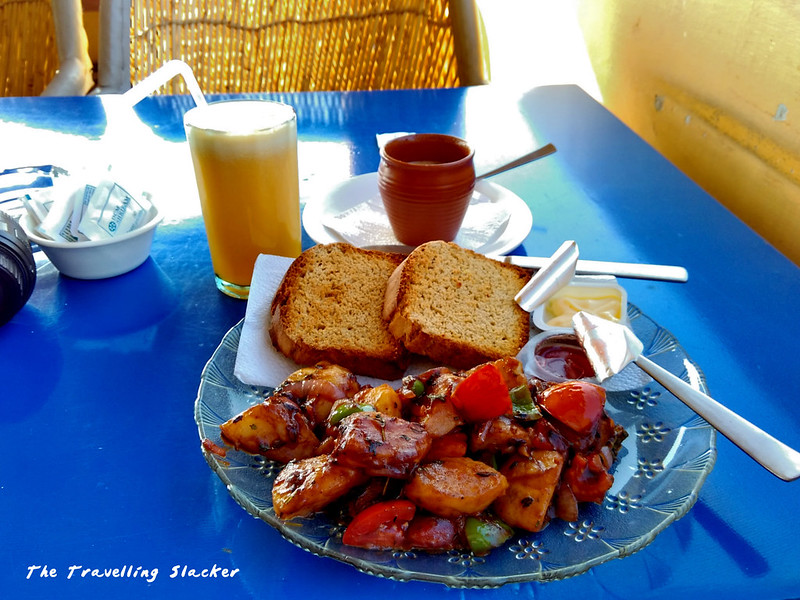 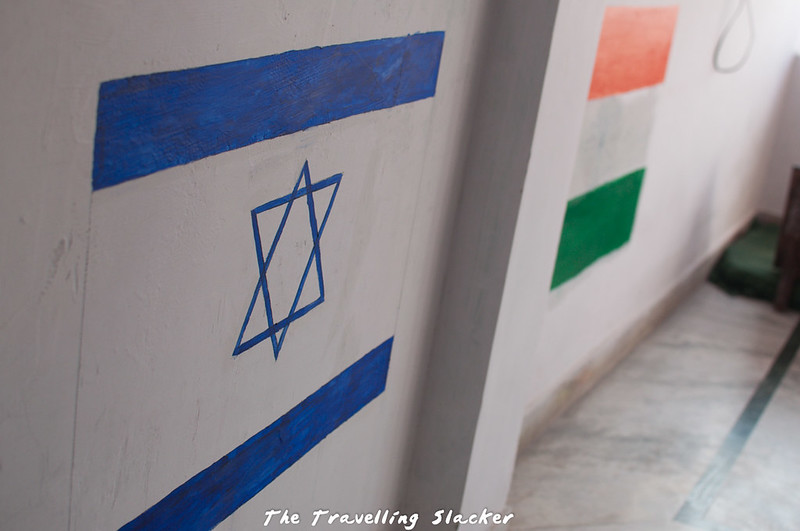 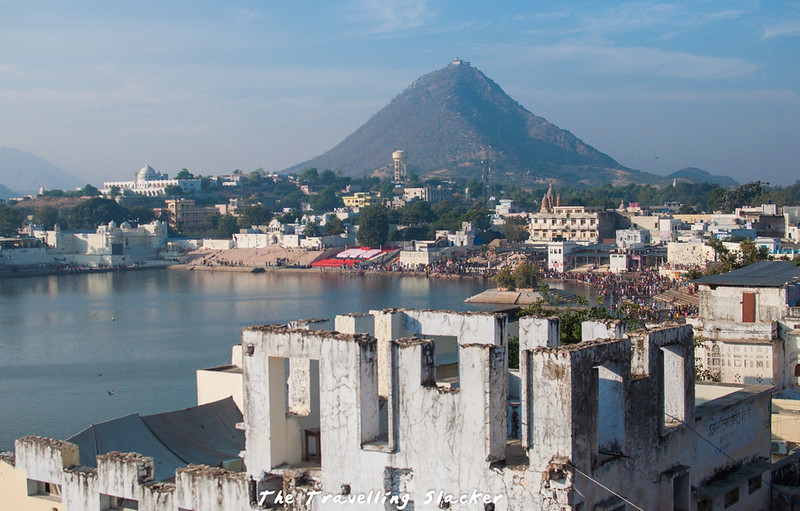 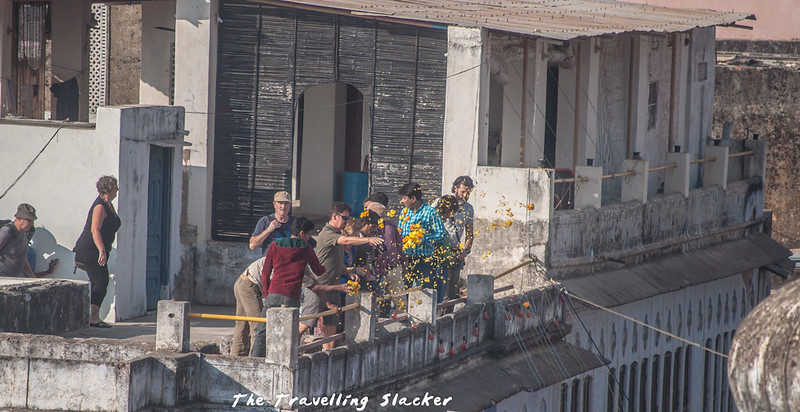 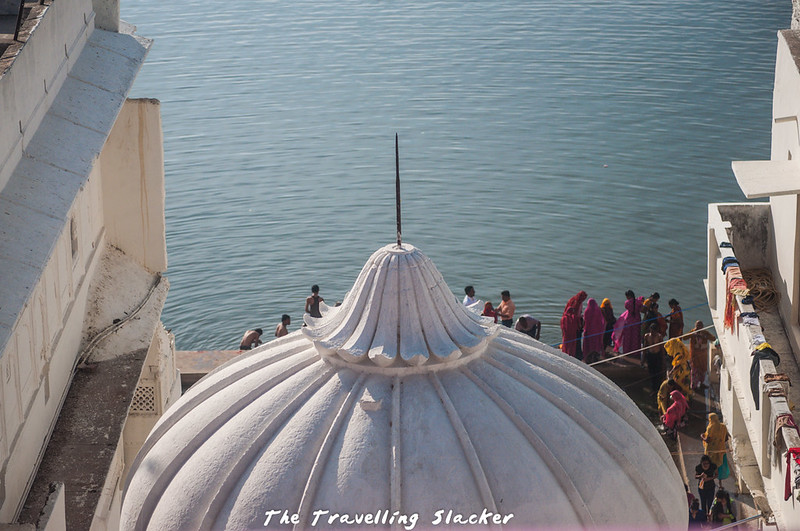 After breakfast, I again thought of entering the Brahma Temple but crowd was even more severe in the morning. So, I accepted the fact that I will return some other time, when the fair is not on, to explore these temples and moved on along the market, just soaking in the touristy environs. 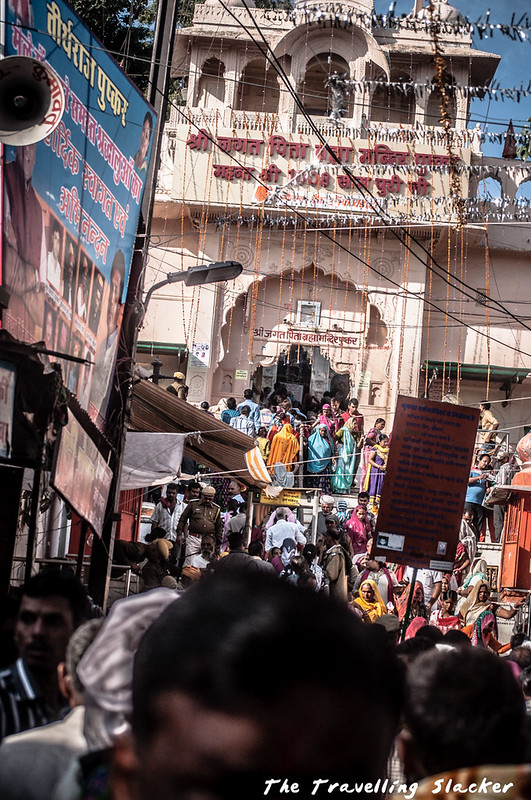 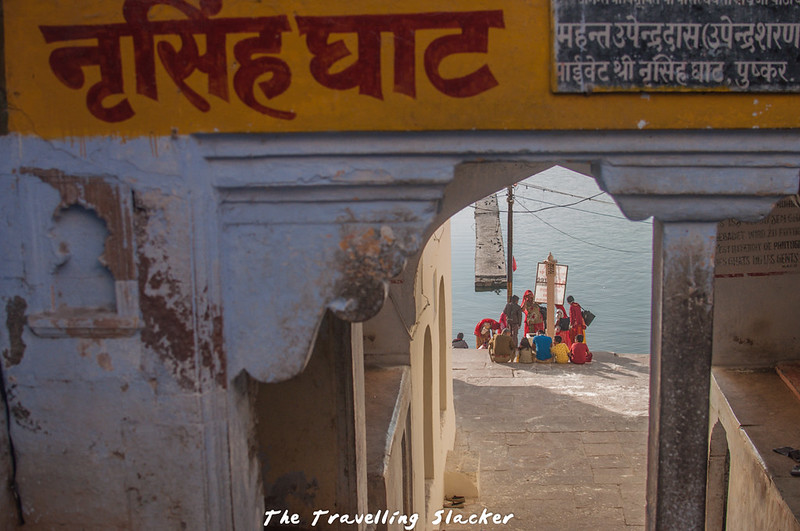 I reached the fairground again. Although it is called a cattle fair, I could only see camels. However, it was probably because it was the last day and everything else had been sold off already. Some people were offering camel rides, which would have been a good idea to experience the true essence of the region. However, I was tight on budget, so gave up on the idea. 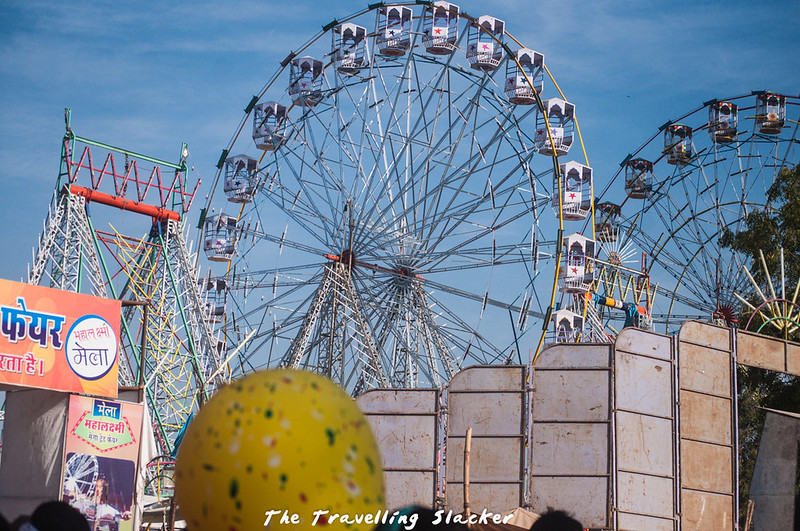 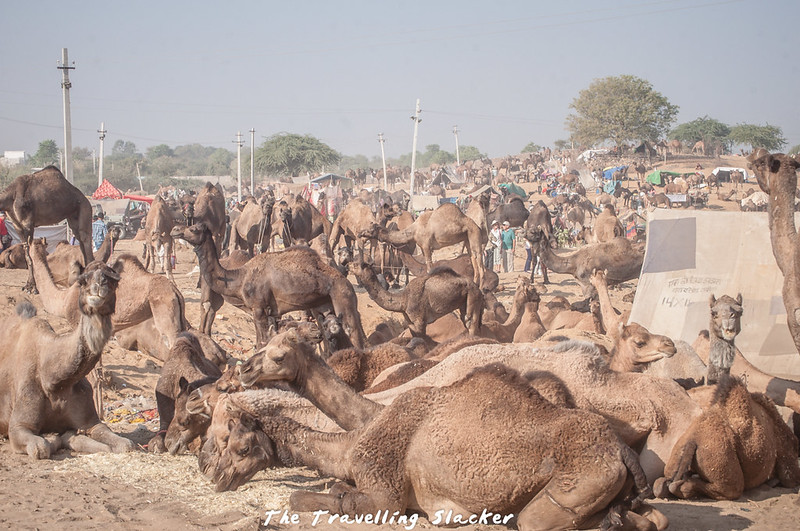 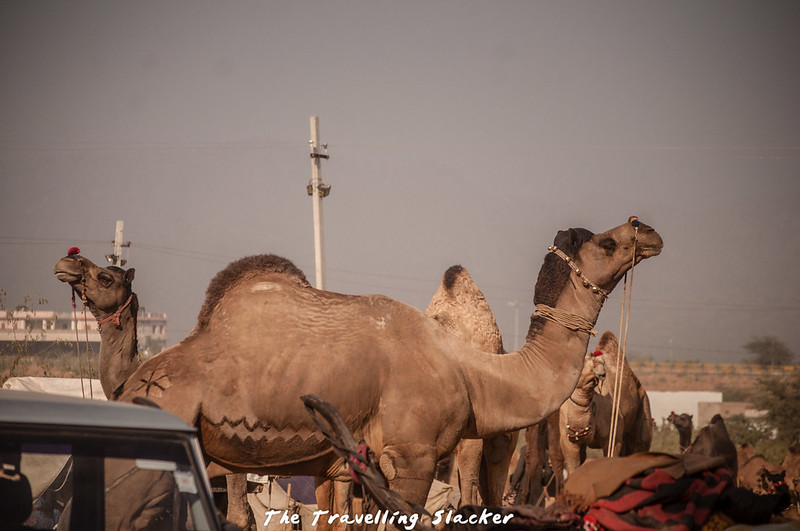 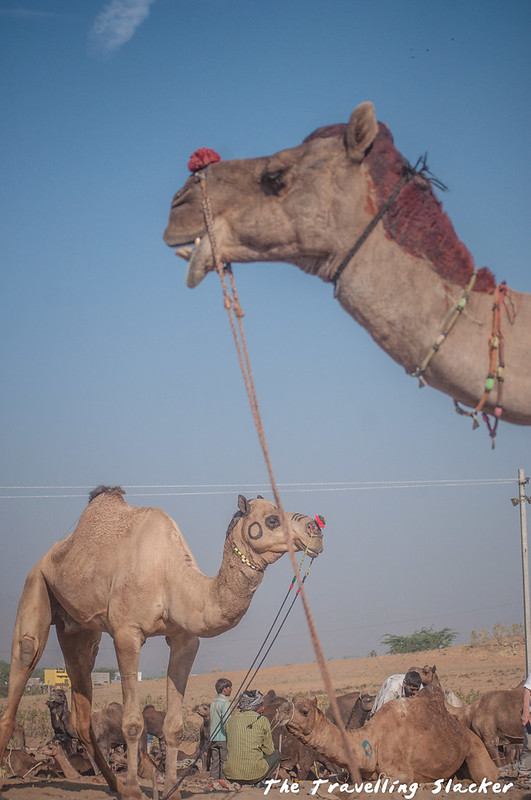 After spending some time with the camels, it was time for me to return. I had a train back to Delhi from Ajmer, so I had to be there on time. However, as I slowly realized that the crowd is increasing on the streets with every passing minute. Finally, I reached a point where it was not possible to move any further and only then I realized that a big procession was on. There were vehicles decorated as chariots and there were people dressed as various heavenly characters. It was a visual orgasm but the crowd got out of control in that narrow lane. One of the nearby sweetshop owner started beating up anyone in sight with his big laathi, apparently to save his own shop. It was a near stampede and left sort of a scar on the memory of a good trip. Anyways, I did notice someone, one of the literally trippiest filmmakers of I have ever known, in the procession, probably shooting something. However, he shall remain unnamed as I do not want to violate his privacy. I somehow ducked the assaults of the aforementioned shopkeeper and after almost an hour, made my way out of that lane and got into a bus. However, I think I will have to return as I could not explore the temples properly. Meanwhile, in case you want to avoid the fair, here is a post about Pushkar Camel Safari and other activities that you can try. 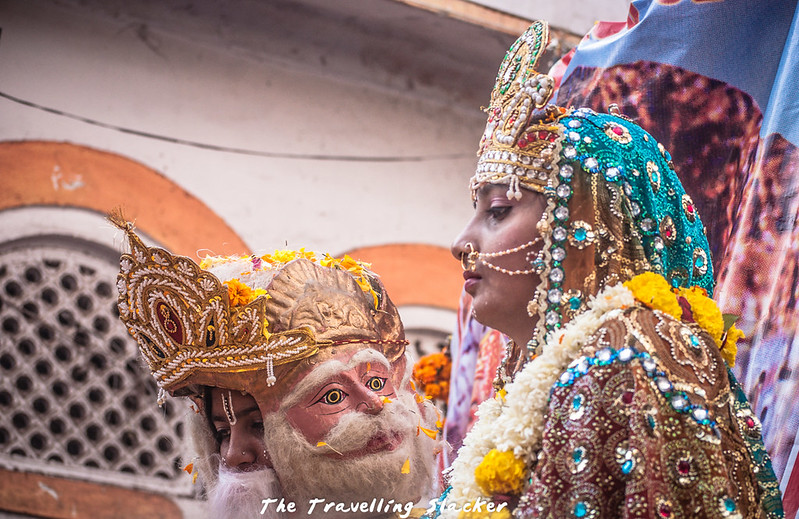 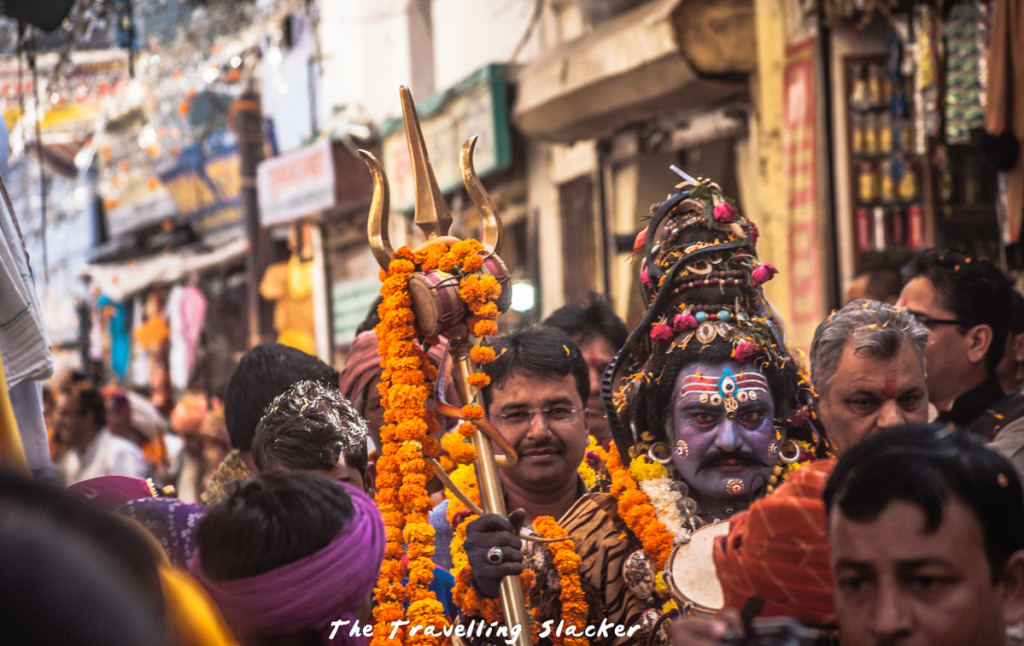 25 thoughts on “Pushkar Fair: A Thousand Camels and a near Stampede”