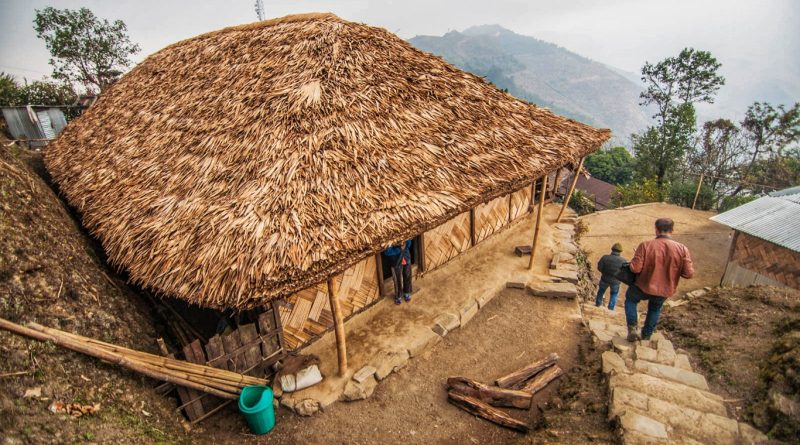 There is a strange ruggedness to the entire Mon district including Longwa. This is not to say that the area doesn’t have its charm, but it is completely different from anything I have ever seen. Maybe it was a combination of turbulent history, natural remoteness, and the fact that we visited during the dull winter. There is no trace of cheesy beauty and romanticism here that is often associated with the hills. Even when you spot a nice frame, it is often obstructed by the arrival of someone carrying a country-made gun. In fact, it is the gunsmith who is among the most intriguing people in Longwa.

After visiting Hongphoi, naturally, Longwa was our next destination. We returned to Mon town from Hongphoi, picked up some packed lunch from a local restaurant, and drove directly to Longwa. Mon town to Longwa is around 44 KMs and the roads are expectedly challenging. It took almost two hours and we had to take lunch break somewhere in between where we found an empty hut. Finally, we reached Longwa at around 2 PM and drove directly to our homestay at the edge of the hills, in front of the Angh’s house.

Before going further, let me clarify a few things about the Konyaks. They are one of the many distinct Naga groups. The word “Naga” is more of an exonym to describe all these groups together by outsiders but actually, all of them have their own distinct languages and culture (Although there are similarities too). Their early history is sketchy at best and they mostly remain independent of mainstream influences till the Colonial times, when the missionaries made inroads into the area. Even then, the Konyaks were the last of the Naga groups to adopt modern ways and the last even of headhunting in the Mon region occurred as late as the 1960s while most other Nagas had moved on a generation earlier. This is what makes Konyaks fascinating, and much closer to the ancient ways compared to the rest of them.

A Slice of Burma

Certain aspects of Longwa have been much publicized. The fact that it is located on both sides of India and Myanmar is one of them. So, one half of it is in India while the other half is in Myanmar. In fact, the house of the Angh (The Village Head), and the homestay where we stayed in front of it, are located right on the border!

In fact, the ancient Konyak homeland is spread over the hills on both sides of the border and while it is not possible for others to venture too much into Myanmar beyond the village, the local Konyaks enjoy dual citizenship, i.e. they can also move into Myanmar without any restrictions. Naturally, a lot of trade also happens with Myanmar and the most potent example of this is the Canda bikes which are prevalent in this region. These are somewhat strange-looking but sturdy bikes that are suitable for the rugged terrains of Patkai Hills. A bit of research showed it to be a Chinese company but it is popular in Myanmar.

After settling down, we went directly to meet the Gunsmith. His house is practically on the Myanmar side, on a downward slope from the Angh’s house. Whether big or small, every house here is built in the same manner and the roofs are always made of large palm leaves prevalent in the area. The other commonality here is the dimly lit interiors and erratic electricity supply. The Gunsmith’s place was no different.

He was busy working with his tools and a lot of equipment. I wonder how he could even see in that dark room but he was clearly good at his work and in high demand. Apart from personal defense, they are also used in hunting. It is a different land, you can’t apply your mainstream ethos here. The Konyaks probably picked up these techniques from the British but were smart enough to quickly adapt them. I even felt an urge to buy one of the guns but let’s not talk about it.

We moved on to another house which belonged to the Metalsmith. He is an award-winning artist. Apart from traditional artifacts depicting Konyak life, he also makes other stuff if you order them. His house was also dimly lit as expected, but we managed to bring a few things out and clicked photographs. It is possible to buy his artifacts as souvenirs, maybe I will do someday when I overcome my penury.

The Angh & His Lieutenants

Later that day, we visited the Angh at his house. The house is visited regularly by tourists. However, the old Angh of Longwa, who was pretty famous and popular among visitors, passed away a few years ago. One of his sons is the current Angh but he is much younger and has not experienced the old Konyak ways. We also went to another large house, which belonged to one of the Angh’s associates. It was also a large house. While the man was not present, we met his wife who posed for a few photographs too.

So, you must be wondering if the Angh and his lieutenants are still relevant. The answer is yes. Especially the Angh of Longwa is important because it is one of the largest Konyak villages and they have influence even over other nearby villages on both sides of the border. They decide various important issues, especially the issues related to cultivation. The farmlands of Konyaks are spread all over the hills including some areas covering bordering areas of Arunachal. Sometimes they clear forests for new farming and the Angh plays a role there too.

At the Traveller’s Inn

Here, I must also commend the arrangements at the homestay, which is called the Traveller’s Inn. This region has a reputation of being “difficult” for travellers but things have improved of late. I was surprised to find even mainstream Indian food which was arranged for some guests.

In the morning after breakfast we left but not before another visit to the Angh. Most of the women at the household are involved in making necklaces, bracelets, and other small items that are sold to tourists. In the morning they spread their stuff in front of the house.While we missed the details of the previous evening.There are a lot of wooden carvings on the pillars and walls of the house and for some reason, there is also a T-Rex engraved. Not sure why.

So, this was more or less it from Mon district. For a detailed guide of the entire region, read the following Mon Travel Guide. For quick details on Longwa, read below.

How to Reach Longwa?

To reach Longwa, first you need to reach Mon town via Sivasagar district in Assam. If you do not have a vehicle, you will find morning shared cars to villages like Longwa but they run early morning and generally packed like hell.

The road from Sivasagar to Mon town was pretty decent while Mon to Longwa is challenging. Although we visited in the dry winters and I am sure it will be far more difficult if you end up in the rainy season (Which is not a good idea anyway).

Where to Stay in Longwa?

Longwa has at least 3 homestays. We stayed in a place called The Traveller’s Inn, located just opposite the house of Aangh! It has a great setting and surprisingly, food arrangements were good too.

Can You suggest someone to plan a visit to Longwa?

If you are not comfortable entering the region yourself, you can contact Holidayscout the arrange a tour of the entire Mon region including Longwa & Hongphoi.

Can one move into Myanmar from Longwa?

Well, not exactly. Longwa is located on both sides of the border. Longwa is on the border so technically, you can walk to the other side. But outsiders cannot go beyond Longwa. The local Konyaks though enjoy dual citizenship and they can easily go to other parts of Myanmar.

What to See and Do in Longwa

Give it some time, walk around the village and talk to locals. The gunsmith as well as the metal smith are worth meeting. Check their workshop and find out how they work. Also, meet the Angh at his house and get an idea about the Konyak lifestyle. You can shop for local artifacts too.

Phone and Data Connectivity in Longwa

Phone and data connectivity is surprisingly decent in Longwa. I was not even expecting it but it was working for me, although frequent powercuts make it intermittent.

One thought on “Longwa: The Konyak Citadel”