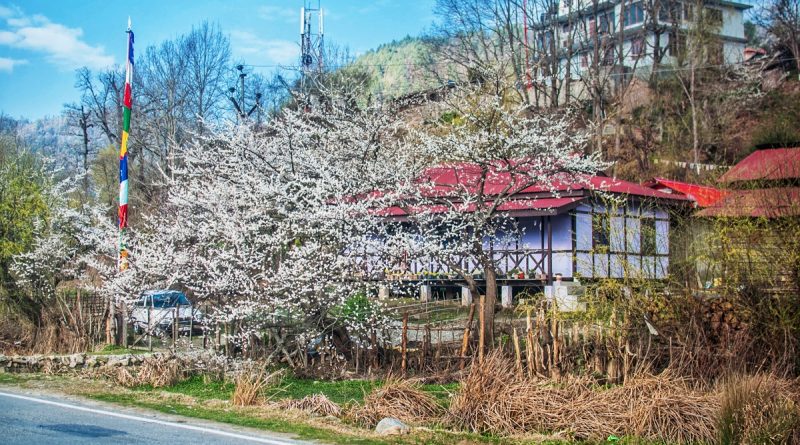 Even as I completed the post on Shergaon a few months ago after a quick visit, I was disturbed by the fact that I hadn’t done justice to it and I was planning a visit again in spring and catch it at its best. Even as I was planning it, I suddenly noticed a post on Shergaon Rhododendron Festival on my social feeds and so, the date was settled immediately. I was wondering about the logistics but eventually, I sold the idea to a few friends and joined them in their car and conveniently got to Shergaon in 6.5 hrs from Guwahati avoiding the tedious public transport routine of Arunachal.

We approached the fecund valley from Guwahati, which was hot, dry, and dusty. After Bhairabkunda, we started an intense ascent (the last time I visited from Dirang, so did not experience the same route). Around 50 KMs or so from the plains involve somewhat generic landscape but eventually, we gained close to 2000 meters, and landscapes suddenly and drastically transformed themselves to the familiar delights of lower Himalayas with scattered stupas, sparsely populated villages, and open horticultural tracts, and prune blossoms. 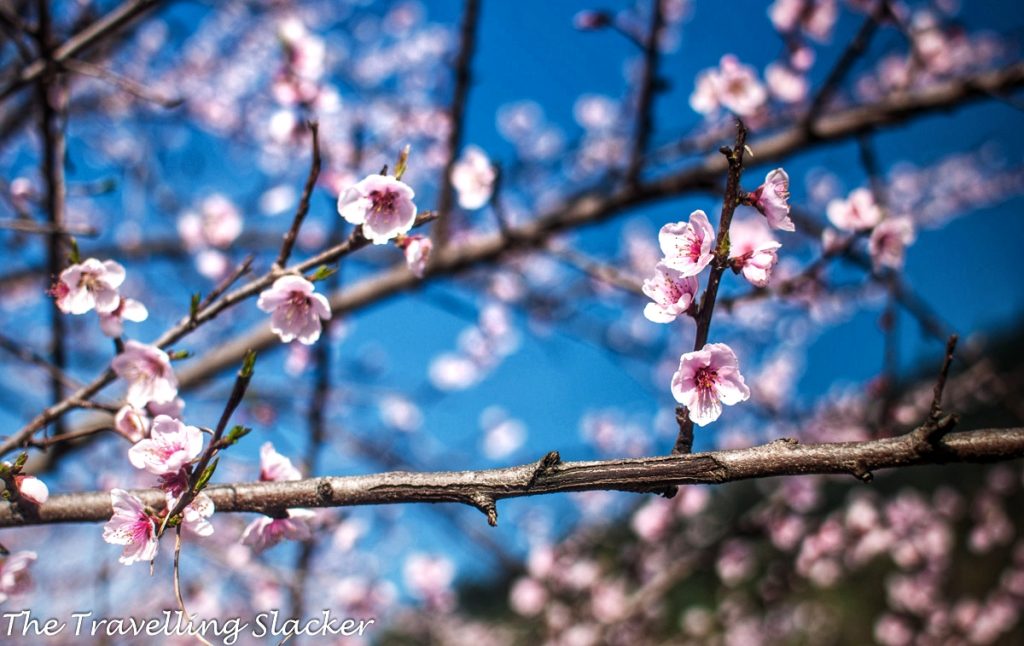 The rhododendrons took time to reveal themselves though. I did not see them as we crossed Kalaktang and Tenzingaon but eventually, I noticed the first one just before entering Shergaon. Then we stopped at the petrol pump just outside the village and as I looked up, I saw them looming on the horizon! 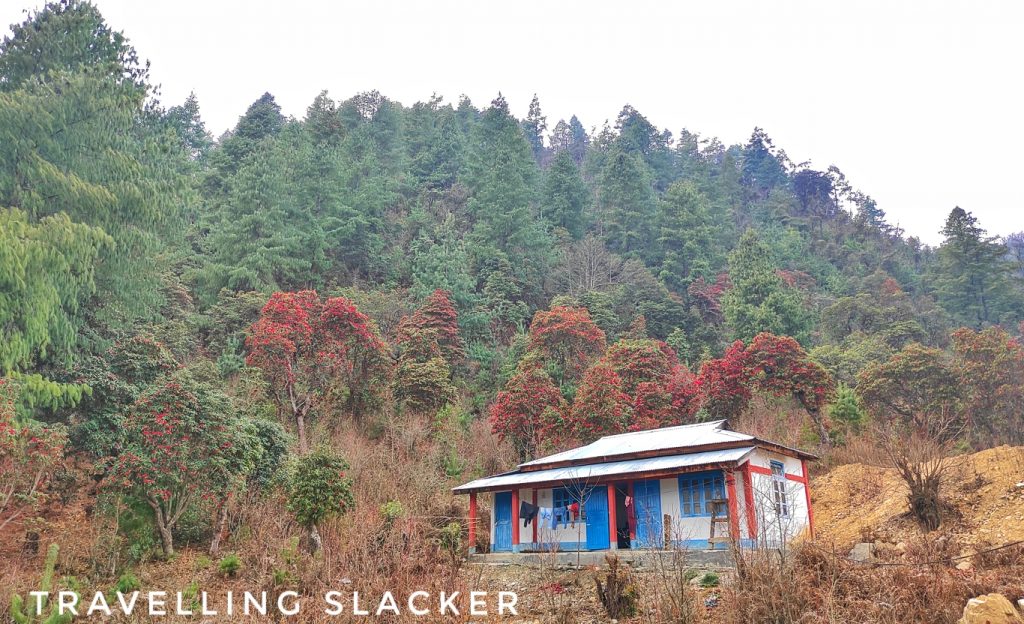 After that we reached Shergaon and soon settled down at the Homestay (more about it later in a different post) and quickly enjoyed some tea and popcorn made of those local corns harvested in October. It was already getting dark by the time we settled down. So, the bacchanalian evening was the only thing waiting for us that day, followed by a homely dinner. 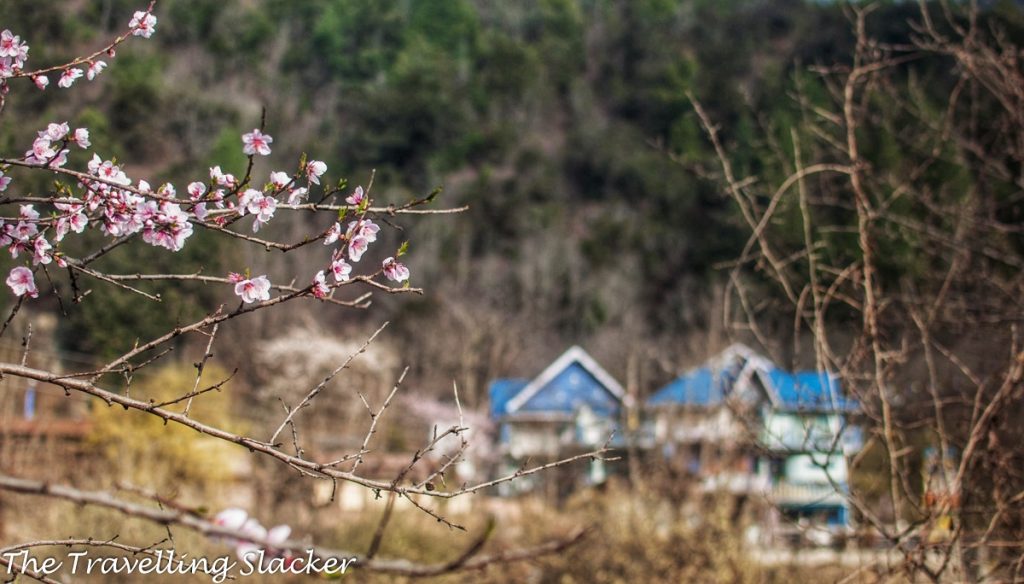 Shergaon in spring is Eden ablaze with rhododendrons, but you can’t ignore the primula encrusted slopes and the tidy wooden chalets engulfed with pregnant trees. I was never good at identifying various trees of this genus as they all look the same to me but rest assured that peaches, plums, cherry blossoms are to be expected here in this season, although it was a bit too early for apple blooms. 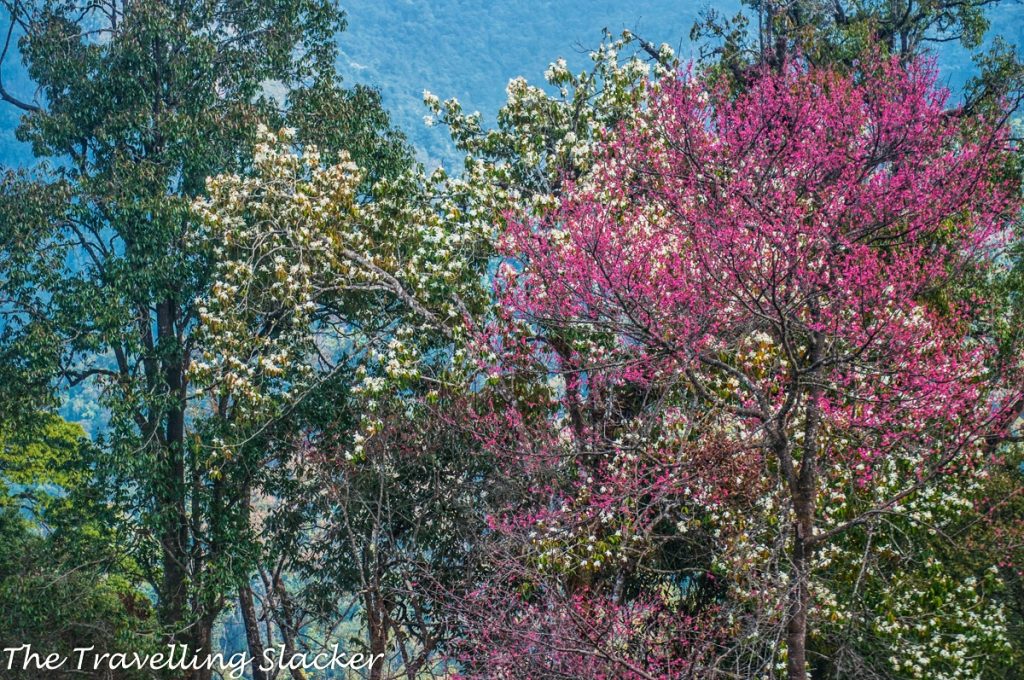 So, the regular readers of this blog are familiar with my almost perverse obsession with the spring season in the Himalayas and its various elements like rhododendrons and various agroerotic trees. I have documented them on many occasions such as here, here, here, and here. However, most of them were in the northern Himalayas. I knew that the Eastern Himalayas in NE can offer the same but most people are unaware of the same and the locals aren’t realising that it can even be an attraction. I wanted to do it a couple of years ago but missed out due to my own procrastination. Last year the plans were all set but the pandemic struck at the worst possible moment (will never forgive Mao & Murphy for this). 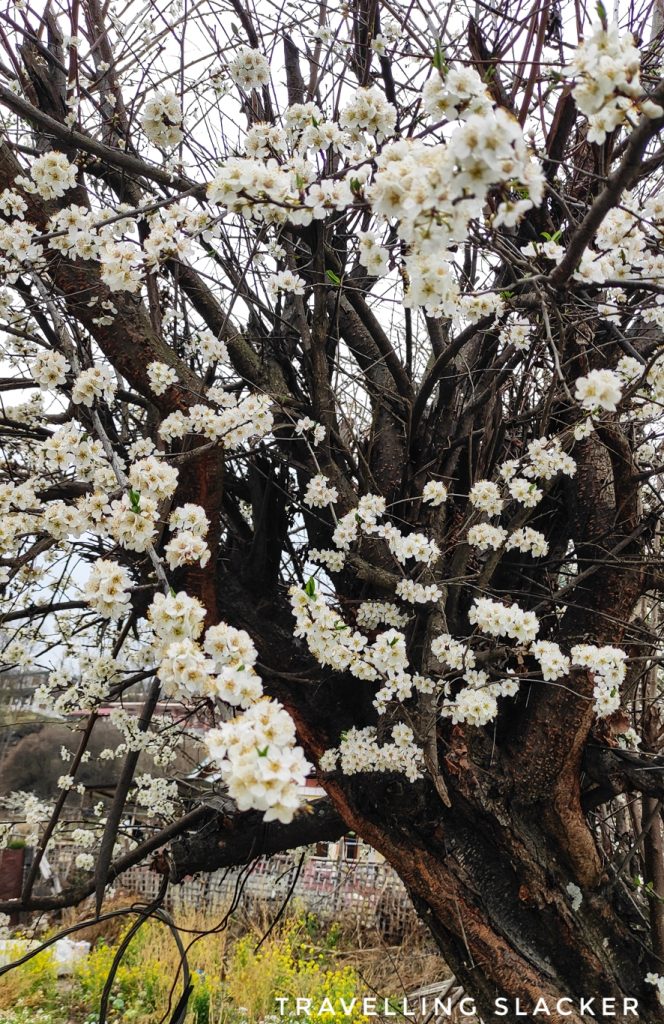 Nevertheless, having done it now, I can safely say that Arunachal offers the same spring delights as the lower Himalayas of HP and Uttarakhand. While not all parts of the state have developed tourism infrastructure, the Homestay experience in Shergaon definitely was on par with any place in the Shivaliks and the ethnocultural delights of the festival added an extra dimension to it. 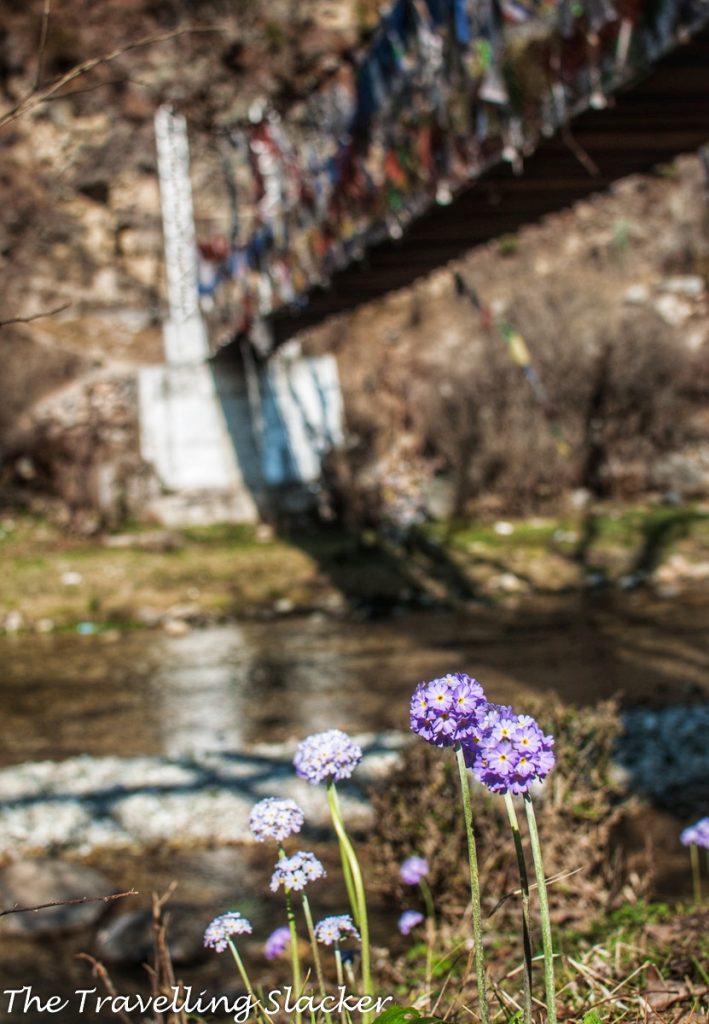 I took a round of the places that I visited on the previous occasion and made some additional detours during the two days of stay while the evenings were reserved for the festivities. Everything looked better in spring. Last time I visited the Choskorong Waterfall, this time we visited the same waterfall but found out that the entire trail is lined with rhododendrons that I never noticed before! They are called Khandak Minto in the local language and the whole festival is a tribute to rhododendrons. 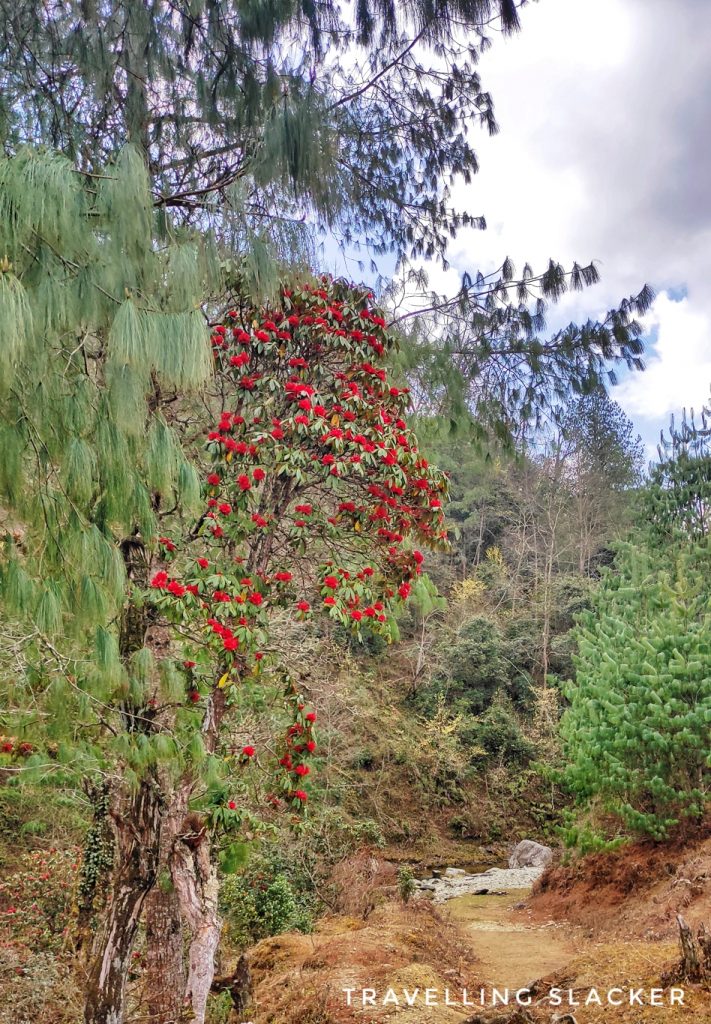 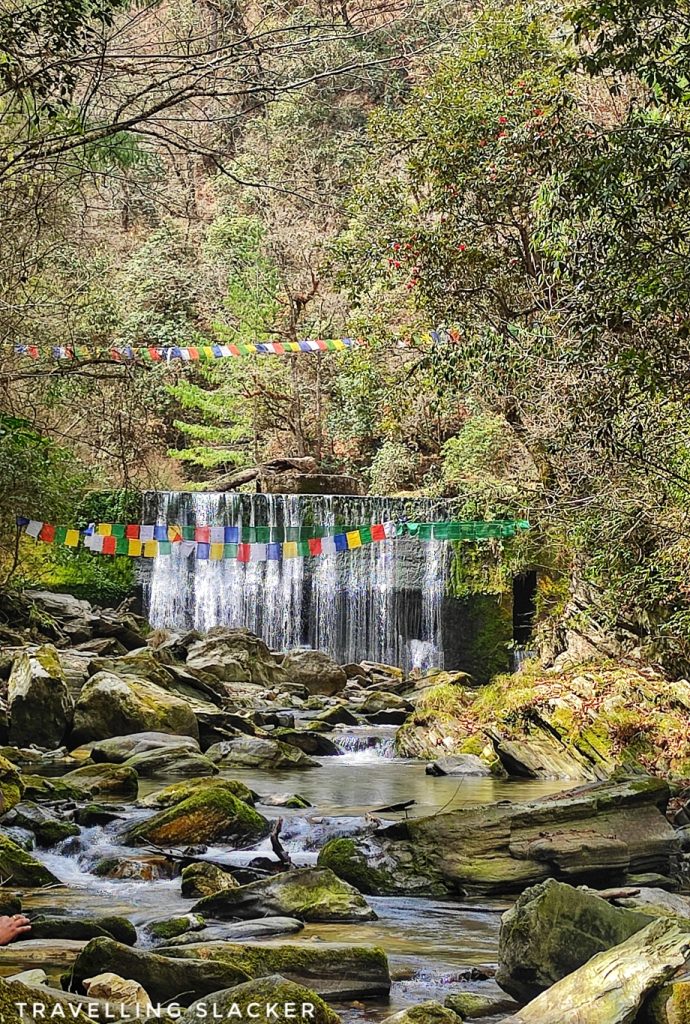 But the most delightful spotting for me were the primulas (enthusiastically mentioned by F Kingdon Ward a century ago in the same region). They apparently indicate the end of winter and the onset of spring, when the new year starts (Called Losar just like most other communities that have relations with Tibet). That is why the flower is also called Losar Minto. They were everywhere, on river banks, grazing grounds, and neglected slopes. In fact, they bloom so abundantly that the organizers planted them on the main stage for the festival itself! 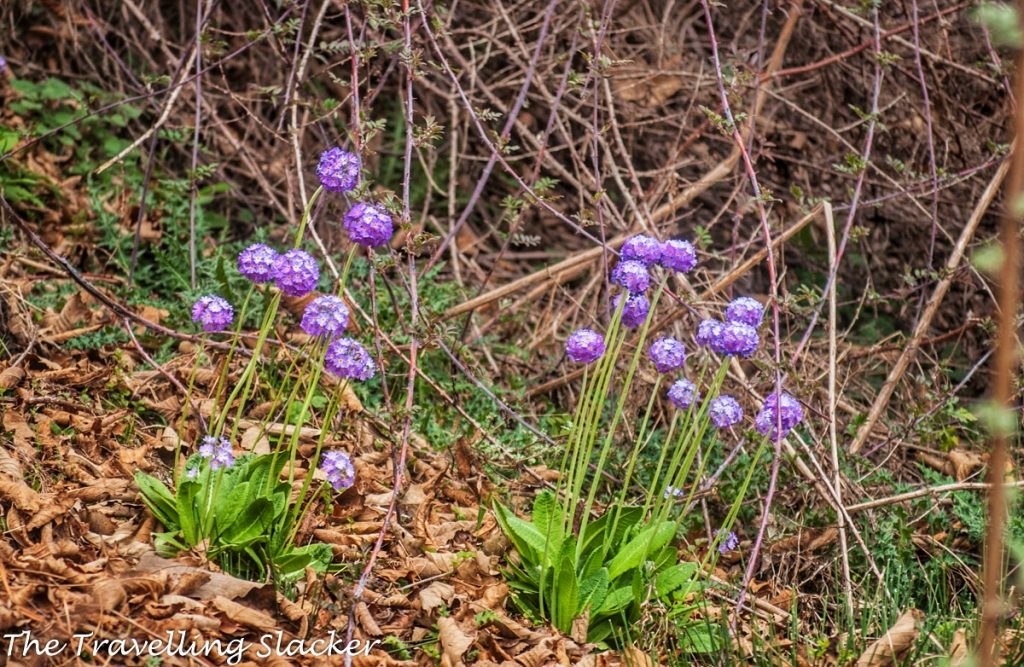 At the Festival Ground

Shergaon Rhododendron Festival is a festival organized to promote the beauty and culture of Shergaon and encourage tourism in the valley. The idea is the same as Hornbill Festival and many others in NE but it is new and both the place and the festival are not yet as famous as they deserve to be). I felt that the organizers did a better job than many other more famous tourism festivals in NE that I have attempted. In fact, the only reason why more people are not visiting is the lack of promotion. I felt that the organizers were lacking web presence as of now and depending only on social media (but I’m changing it through this post). 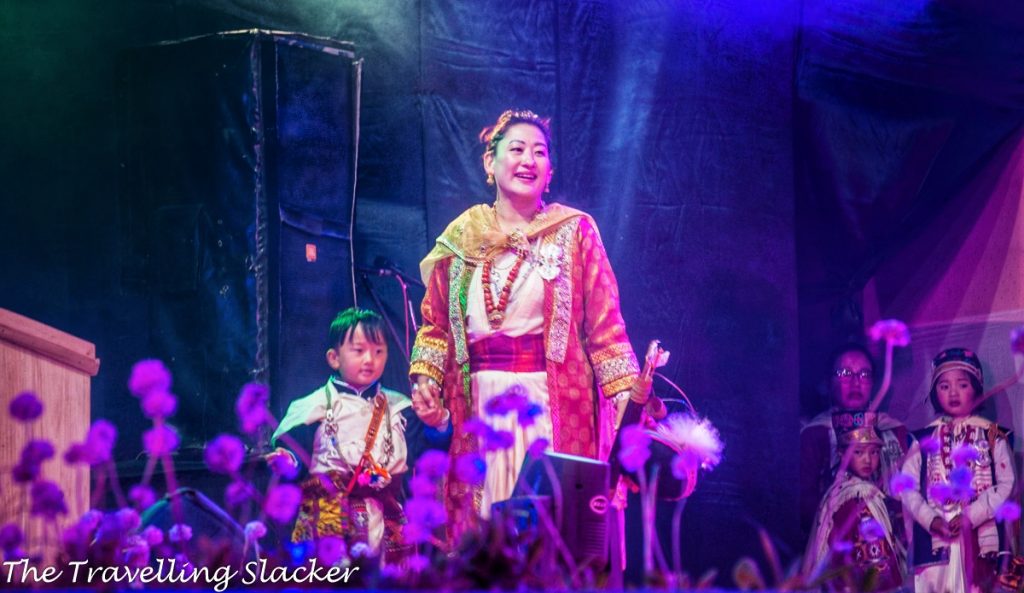 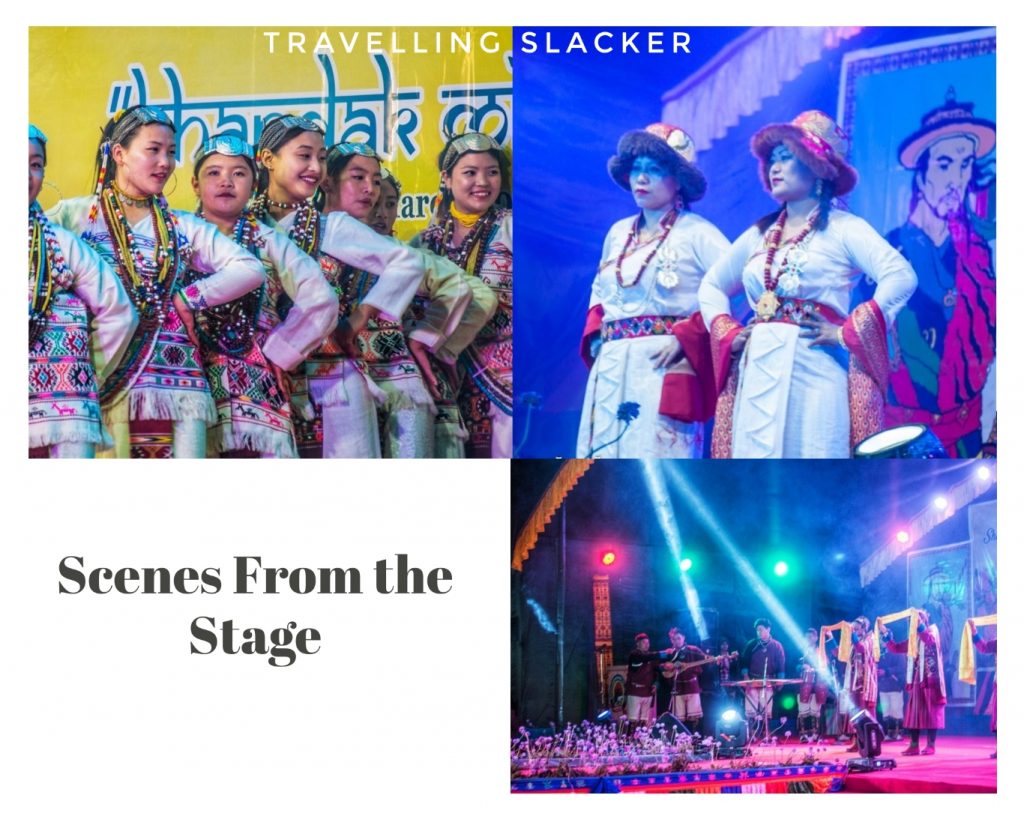 While the idea of this festival is not much different from other festivals, there was a certain uniform aesthetic that could be seen in every aspect of the festival. It showed how close-knit the Sherdukpen community is and the symbiotic relationship they have with nature around them. The spring is important because much of the economy depends on the fruit orchards, which are the main cash crops. The leitmotif of the entire fest seemed to be scarlet rhododendrons as well as violet primulas. Even the food stalls run by local women were decorated with these flowers and floors were covered with pine needles. Mostly local food and wine made of local cereal and fruits were available at the stalls. 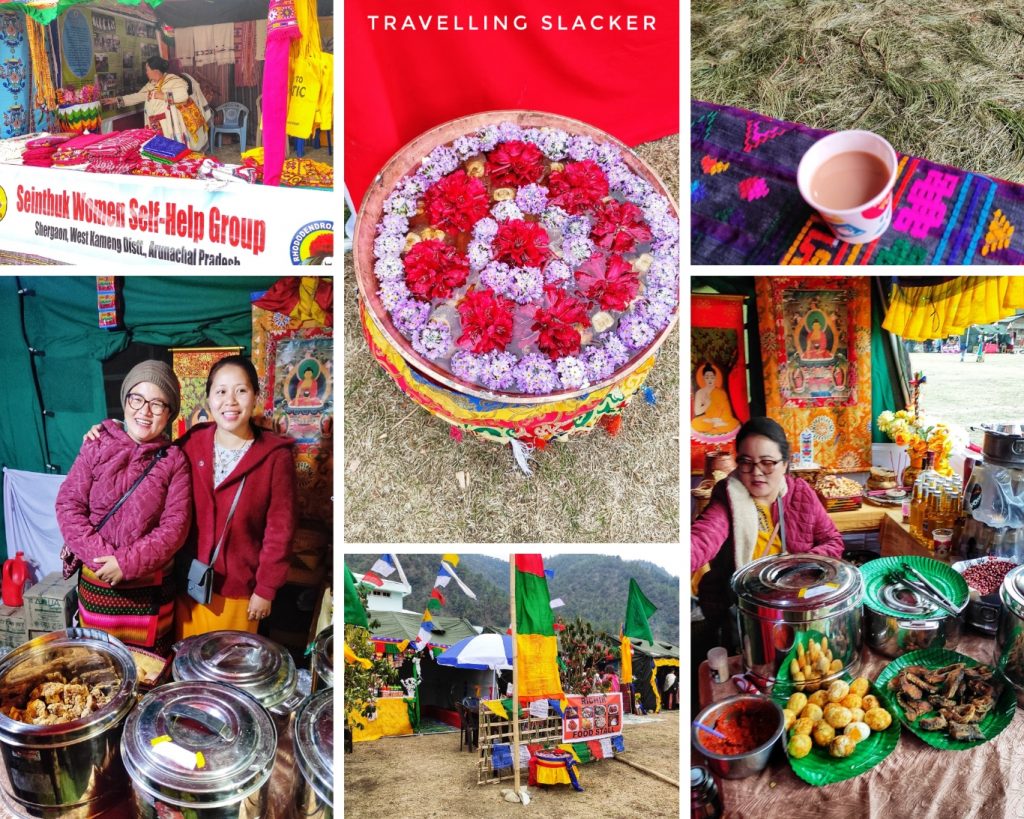 The festivities consisted mostly of traditional dance performances apart from a few invited artists who delivered popular Bollywood numbers. The most notable and unique aspect was the Aji Lamu, which was sort of a pantomime that tells a certain story with masked dancers but is somewhat different from what I saw in Torgya of Tawang. 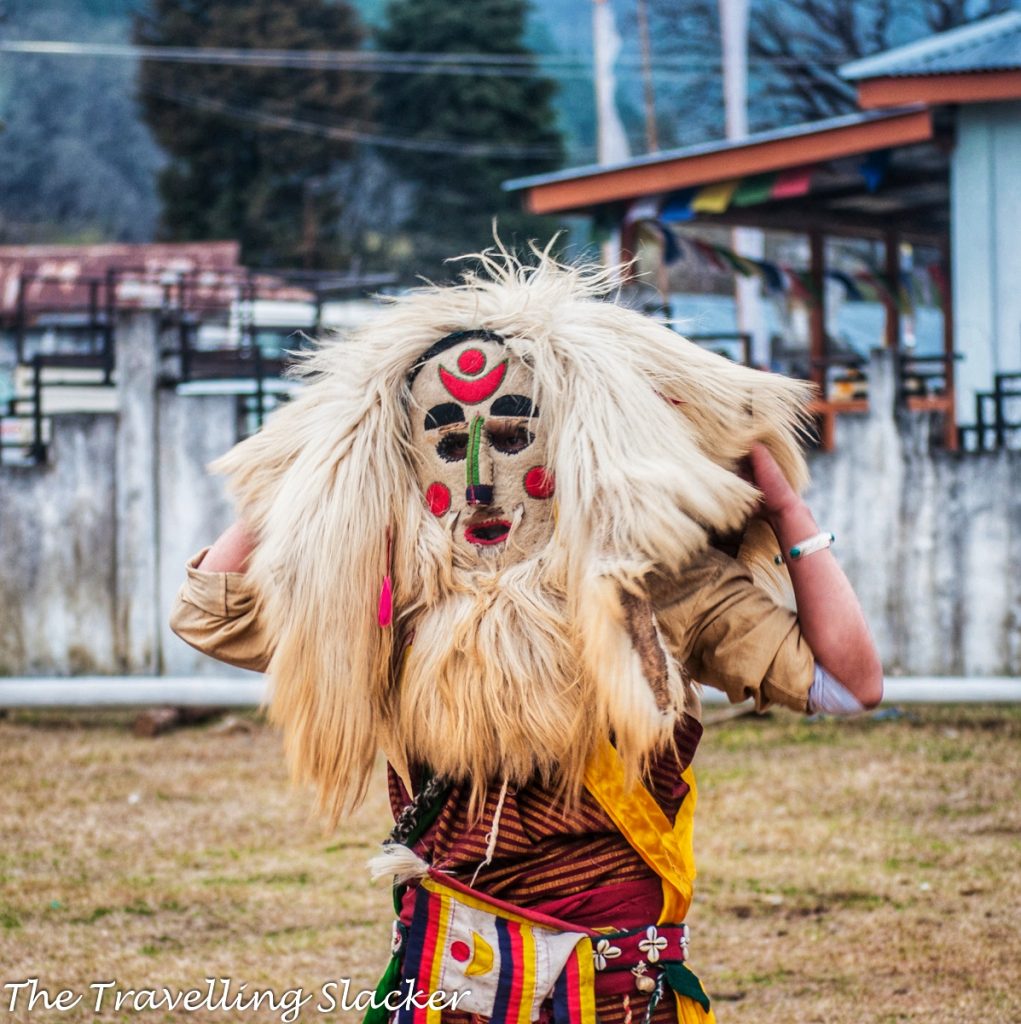 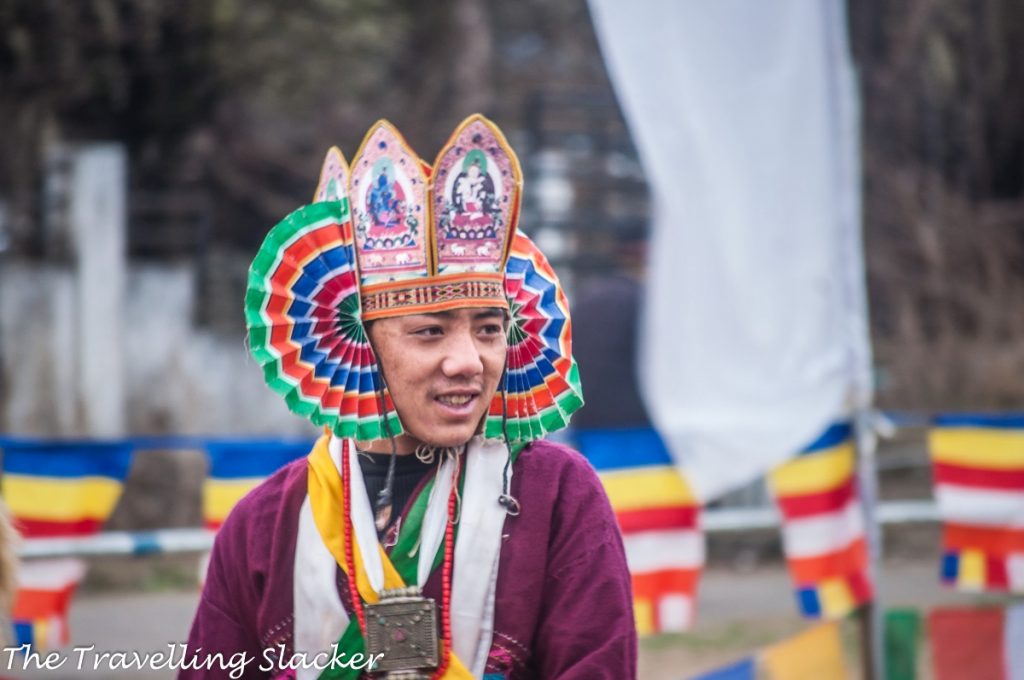 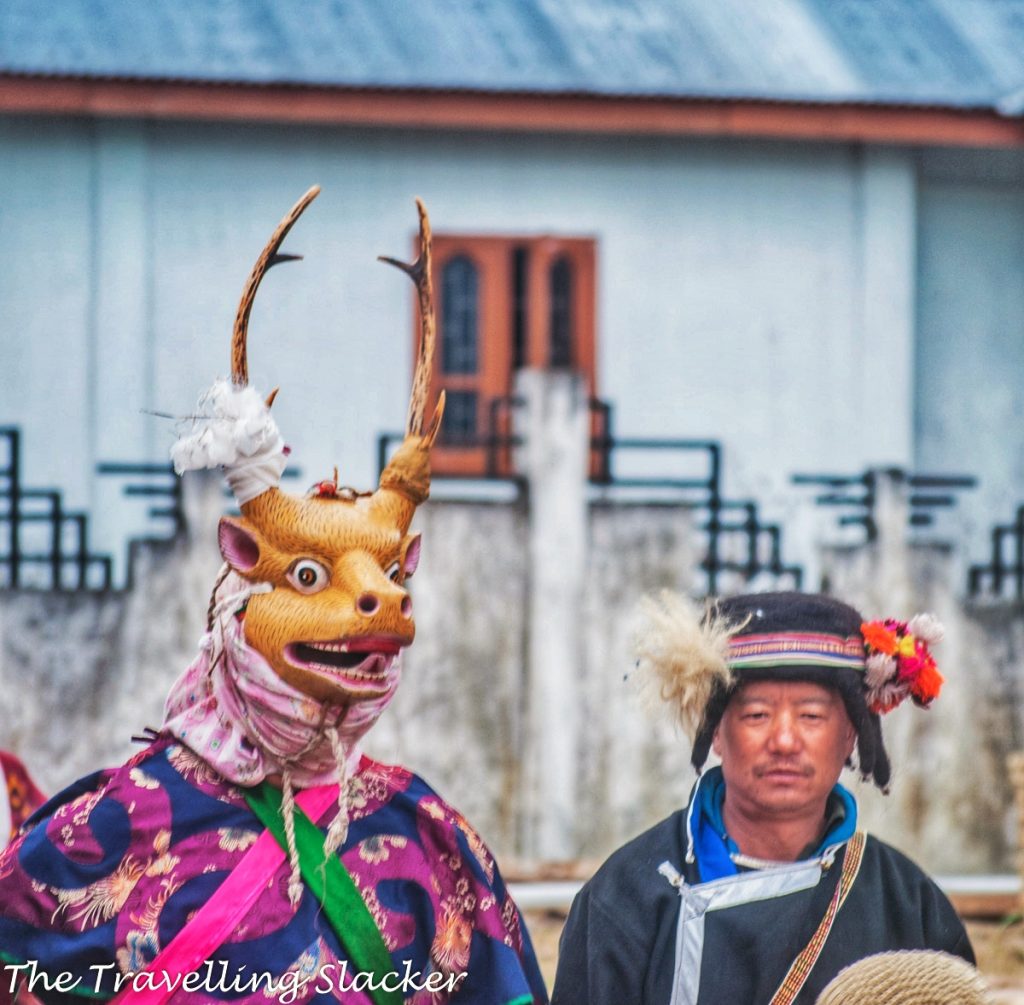 Apart from the Sherdukpen dancers, groups from neighboring ethnic groups of West Kameng district had also participated including the Monpas (who dominate most of the West Kamneg & Tawang & need no introduction), the Akas (who are apparently hiding a secret language even within their small community), and the Buguns (who have a bird named after them). Unfortunately, the weather deteriorated the moment I entered the festival ground to get some portraits, so they remained sub-par.

So, this was more or less it. Towards the fag end of the festival, we realized that our hosts at the homestay were running a barbecue near the ground, across a hanging bridge. So, that is where the night ended, with a few more pegs of the obvious.

Where does the festival take place?

As the name suggests, it takes place at the community ground in Shergaon, which is located in the West Kameng district. Read my original Shergaon post on the place for a more detailed guide.

When does it take place?

The rhododendron season is spring. So, it naturally takes place in mid-March. This was only the second installment, I hope it continues.

Does one get accommodation near the festival?

Yes, there are homestays in Shergaon and even the festival organizers were offering tents to visitors who arrived without planning. It is a well-developed area and the highway passes through it. So, you should not have any issues.

There will be stalls at the festival ground, run by local women offering local food and beverages. Apart from that, there is one decent restaurant in the village as well as two alcohol shops. If you are staying at a homestay, they will naturally provide food.

Is it a traditional festival?

No, it is organized to promote tourism in the area. There are other traditional festivals of the Sherdukpens. The likes of Losar (New Year) in mid-Feb and Cheykor in July can be considered if you want to catch the traditional activities in their purest form.