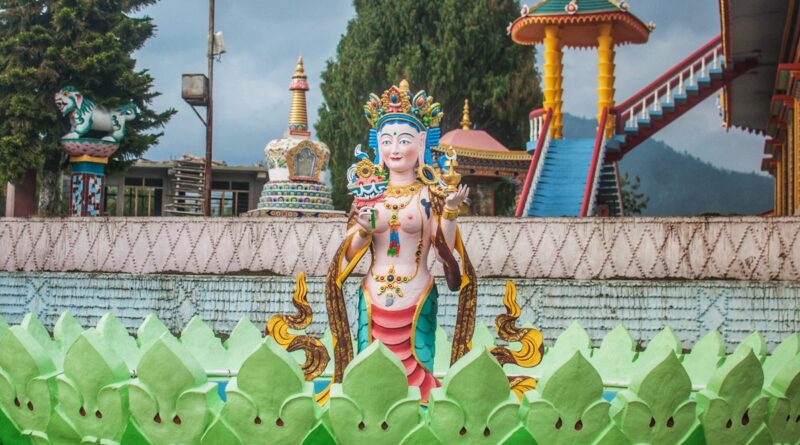 So, this post is about two things, The Chilipam Gompa, which is a reasonably famous monastery near Rupa, and the under-construction giant Yokmuzor Buddha Park at a small Sherdukpen village called Mushakshing, that I am sure is not known to many except locals. We were trying to visit the first one but accidentally did the other one too. I believe the second one will also eventually get famous (It is going to be inaugurated soon). So, hold on as I take you through both.

Chilipam Gompa is a major attraction in Rupa Valley and a short drive from Shergaon. I’d failed to cover it on previous occasions and so wanted to cover it this time. As you know, we were at Shergaon for the Rhododendron Festival already and so we started driving from Shergaon after lunch and soon reached Jigaon, yet another major Sherdukpen village a few KMs ahead. Our homestay hosts had given us instructions but we made a mistake and took the wrong diversion and rushed confidently towards a dead end.

After a while, we started having doubts. We crossed a smaller gompa but there was no sign of the one we were looking for. We asked someone who said that we were in the right direction but eventually we realized that we had been wrong right from the beginning and we had taken the wrong turn in Jigaon itself. It was getting late and we were not sure if we could return and then find the right path and reach it before dark. So, while returning, we stopped at the smaller gompa that we had crossed earlier. A few local ladies were sitting outside.

We talked to them and finally, they told that the name of that village is Mushakshing. However, they also invited us to have tea and visit the small gompa. We were somewhat surprised as they also brought out roasted corn and khapse. It reminded me of the unexpected hospitality in Tayul Gompa in Lahaul, although on that occasion I have gone there deliberately.

It is while interacting with them that we had a clearer picture. The reason why some bystanders gave us wrong advice earlier was that they probably confused it with a new big Buddha statue that is being built nearby. We were told that it was near completion and we should visit it anyway. It was a small diversion nearby and so we thanked them for their hospitality and drove to the statue which was a big one but so far was hiding behind the bends.

So, this was the statue. It is 92 feet tall and is constructed on the edge of a hill overlooking the valley, somewhat like that one in Langza in Spiti. It was still incomplete and work was going on. From what I have heard, it is now complete and inaugurated soon. Maybe I will get better images and update this post later.

We still had around an hour of sunlight. We came back to the main road, drove around 100 meters ahead and finally saw the directions! The main road goes towards Rupa while a small road branches out and goes up the hill towards Chilipam. Located 15 kilometers from Rupa, Zangdokpalri Monastery, popularly known as Chilipam Gompa, is built on a cliff that offers excellent panoramic views of the entire Rupa Valley below and the higher peaks at the horizon. it is adorned with some of the region’s most exquisite Buddhist art.

We still had a bit of confusion as several additional roads were leaving in all directions but nevertheless, we finally figured out the route and reached a waterfall. We were told by our hosts that there was a waterfall en route, so we knew that we were on the right path. I’m not sure if the fall has a specific name but I’ll simply call it Chilipam waterfall. It’s a reasonably high fall, somewhat reminiscent of Siko Dido en route to Mechuka. But such falls are actually pretty common in Arunachal.

After the fall it took another 10 minutes as we first reached a small settlement of Chilipam and then the Gompa located higher up, on the edge! It was near dark and the day had been gloomy but with a final act of mercy, Murphy decided to relent, albeit for five minutes. For those brief minutes the sun emerged from the clouds and the proverbial golden hour started.

I read somewhere that a Chinese architect designed it. I couldn’t verify it. In fact, it was sort of desolated, maybe because our timing wasn’t right. Nevertheless, it is indeed designed like an oriental palace. I also remembered one of the final scenes of Crossing Bridges where the character visits a monastery. This was that one!

However, personally, the most fascinating sculptures at the Chilipam compound for me were the female figurines, especially the serpentine deities rising out of lotuses. I should have known it but actually, I can’t exactly remember who they are supposed to be.

So, this was more or less it. We eventually visited the place we wanted to visit but due to a willy mistake, ended up visiting one extra place. It was one of the better mistakes of my life.

Chilipam gompa is located atop a hillock around 15KMs from Rupa town. However, if you are coming from Shergaon side, you don’t have to reach Rupa. After crossing Jigaon, you’ll see the directions going towards Chilipam. On this route, you’ll also see the waterfall.

Mushaksing is on a different route, a smaller diversion going right just after you cross the bridge near Jigaon.

Rupa has a couple of hotels if you need them. Otherwise, you can always visit from Shergaon on a day trip. You’ll need a vehicle though. Public transport is unlikely.