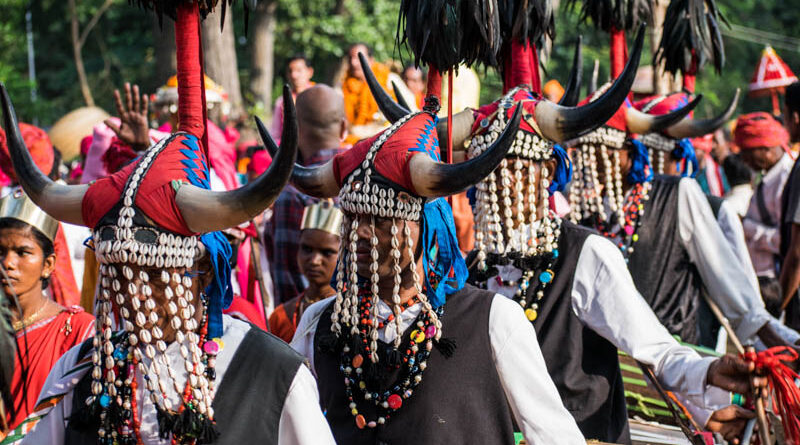 Bastar Central India Chattisgarh
2021/08/312021/08/31 Jitaditya Narzary 1 Comment aboriginal people, ethnography, traditional festivals
Describing Bastar Dussehra is somewhat difficult. It is not a singular ritual, nor is it restricted to one location. It is NOT exactly what the name suggests. You have to go through the complex history and ethnography of the region to make sense of it. On top of that, it runs for 75 days!
Yes, that’s right. Bastar Dussehra is officially 75 days long, which makes it among the longest festivals in the world. However, the bulk of the major events taking place in the last 10 days coincide with Navratri/Durga Puja and Dussehra/Vijayadashami.
My Bastar visit also coincided with that time and then I visited various attractions in Bastar but repeatedly came back to Jagdalpur to attend various events related to the festival during the 5 days I was there. I have already discussed the other attractions in some previous posts, so let me now offer some idea about the festival.
As mentioned already, this festival does not have many similarities with Dussehra that is celebrated in other parts of India (Durga Puja pandals can be seen though as there is a significant diaspora from Eastern India, at least in the city of Jagdalpur).
Remote and densely forested Bastar is inhabited by several aboriginal communities but royals from neighboring regions arrived here and established the Bastar Kingdom in the medieval era. This festival is one of the examples of the kind of bond and interactions these communities have. While the Kingdom no longer exists in its original form, the King of Bastar, a descendant of the royal family, is still revered and he makes an appearance during the festival and interacts with the representatives of various tribes.
The origin of this festival goes back to King Purushottam Deo in the 15th century AD. He went for a pilgrimage to the iconic Jagannath Temple of Puri and received divine blessing to become the ‘Rath-pati’ (rath means chariot). So, even now, they build a gigantic, larger than life, wooden chariot (somewhat similar to the Rath Yatra in Puri).
So, Bastar Dusherra doesn’t have any connection to the events of Ramayana, unlike other Dusherra celebrations. The primary deity here is Goddess Danteshwari. It is one of the 52 Shakti Peeths and the name comes from Sati’s Daant (tooth) that fell here. Her temple is located in Dantewada, a small town that also derives the name from the temple. It is around 80 Kms from Jagdalpur and Devi Danteshwari is also the Kuldevi (Family Goddess) of the royal family of Bastar.
So, the preparation for the major events of the festival starts several weeks before. Various activities are assigned to people from specific tribes during this period, which shows the way this festival was developed to involve every stakeholder in this region.

Pata Jatra & Deri Gadhai
The giant, two-tiered chariot starts getting built sometime in July on a moonless night (Hariyali Amavasya). The first piece of wood used for the chariot is drenched in sacrificial blood at the Palace Temple. It is followed by Deri Gadhai, when the pillars are posted just outside the palace after 12 days.
Kachan Gaadi
Closer to the festival, a young prepubescent girl is chosen and anointed as Kachan Devi. She apparently works as the medium between the people and the goddess to seek her blessings. She dresses like a goddess and sits on a thorny altar (also built specifically for the festival). Her approval is necessary to begin the festivities. It reminded me of Kumari Puja in Nepal. Rules were probably stricter earlier but it is only for a limited period. The girl goes back to school and normal life after the festival nowadays. We even met the girl who was chosen for that year, just before the start of the festival.
Kalash Sthapana

On the first day of Navratri, holy urn (kalash) are established in various temples, most importantly, at the Mavli Devi temple. Mavli Mata is the most important local deity and a small temple of hers is located near the palace.
Jogi Bithai
For this purpose, a youth from Halba tribe is chosen and he sits in a pit, almost buried to his neck. he remains there for several days till Jogi Uthai. Animal sacrifices are made.
Rath Parikrama

The giant chariot mentioned earlier circumambulates the Mavli temple for the last few days. The chariot is so huge that dozens of people are needed to drag it.
Nisha Jatra
This takes place at night as the name suggests. A procession takes place and animals are sacrificed at a particular spot.
Jogi Uthai

The aforementioned buried youth finally comes out after several days and gets greeted with gifts.
Mavli Parghav
According to some traditions, Mavli Mata is supposed to be a sister of Devi Danteshwari. So, her idol is brought from Dantewada to Jagdalpur Palace and is considered to be the chief guest for the festival.
Bheetar Raini
The great chariot is stolen in the dark of the night on a penultimate day from the palace and kept hidden in the forest (Actually nowadays the forest is a public park in the city).
Bahar Raini

The king reaches the spot where the chariot is hidden on the previous night with his entourage. He offers newly harvested rice to the goddess, and interacts with the representatives of various tribes, and brings back the chariot to the palace. 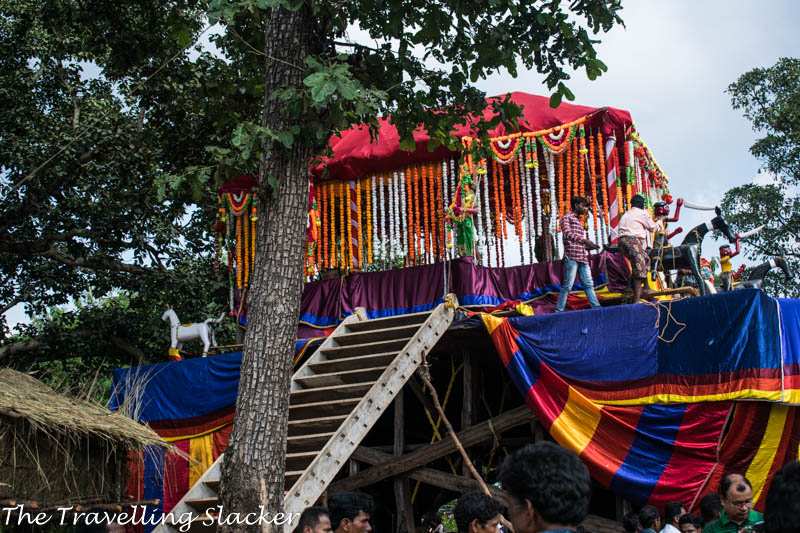 Kachan Jatra
The festival is successfully concluded and the aforementioned Kachan Devi is thanked for blessing the festival.
Muria Durbar
The same day the tribal chieftains have a meeting with government officials from the government and the king to discuss their issues. This tradition dates back to the 19th century and is a great way to exchange views and raise their issues for the locals.
Auhadi
The festival ends with a lot of other festivities and eventually, the deities are given a farewell and they go back to the temple in Dantewada at the end of it. 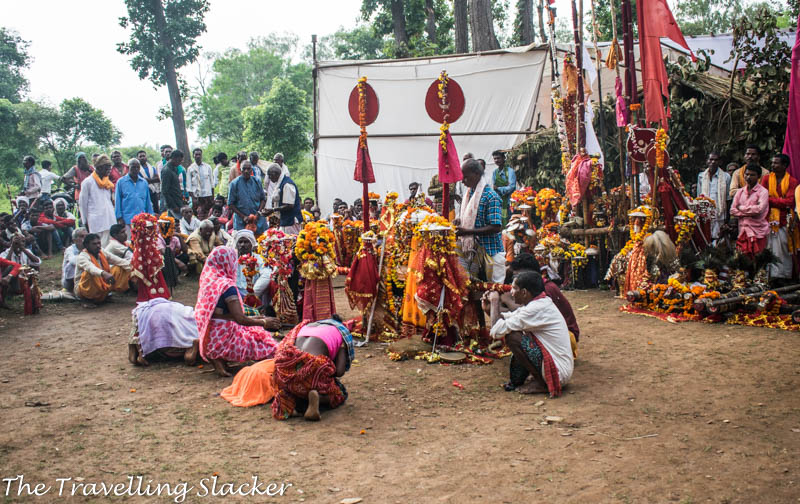 So, how do you explain this festival? The various events, such as stealing of the chariot, clearly eludes to real events of the past although now they are done in a symbolic manner. A quick visit just allows you to get a glimpse of it. You will have to spend more time in the region to fully understand every aspect of it. As of now, I am just leaving you with a few more images of locals from various tribes like Gond, Halba, Abhujhmadia, Dhuruwa, Muria, and Bison Horn Maria etc, who arrive at the festival wearing their traditional dress and distinctive headgear and perform respective dance routines.

Where does Bastar Dussehra Take Place?

As the name suggests, it takes place in the Bastar region of Chattisgarh. Various rituals and events related to the elaborate festival take place in different spots in Jagdalpur city and nearby Dantewada town. Read my Bastar Travel Guide for more details.

Dusshera is on 15th October. So, the primary activities of Bastar Dussehra start 75 days prior to that. However, the main events take place during the last 10 days and that is when most people visit.

How to visit it?

You can just reach Jagdalpur and visit it. However, without a guide, you may get lost in the cows and also due to the fact that it is a very long, elaborate, and complex program with various things happening at various locations. So, it’s better for you to have a responsible tour operator.

How many days should I have?

Assuming that you can’t stay here for 75 days, you should time it with your Dusshera Holidays. The last few days are the most important and it ends on the day of Dussehra. You can have around 5 days and mix up the festivities with other activities like a hike to Dholkal and the waterfalls of Bastar.

One thought on “Bastar Dussehra: The Longest Festival in the World”