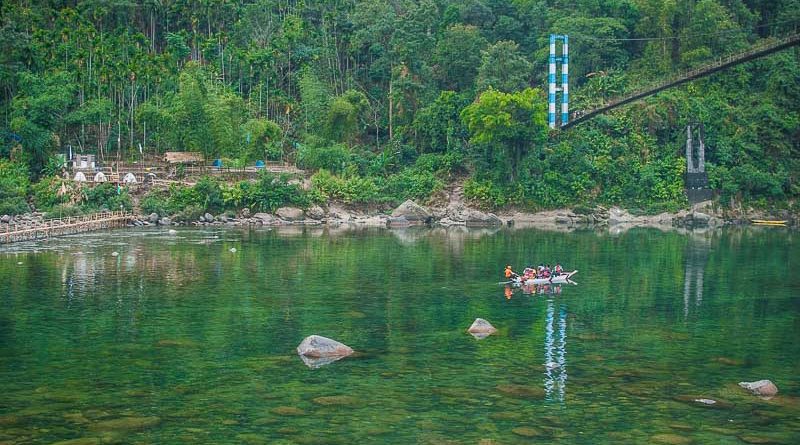 Meghalaya North East India
2020/03/282020/03/30 Jitaditya Narzary 0 Comments Dawki, Meghalaya, Umngot
Shnongpdeng? Isn’t that “in” Dawki?
Asked a friend when I mentioned it first. Well, a lot of people get confused but to keep it simple, Shnongpdeng is basically a small village, which is a few KMs away from the small town of Dawki. Both are on the banks of the same Umgot River and so, you get similar views. However, common sense can tell you that a secluded village is always better than a town on the highway.
So, there are these places that keep alluding me for years, and by the time I manage to get there, they’d have had successfully made the transition from offbeat to the mainstream. Shnongpdeng is one of those places and as expected, it was jam-packed with people, everything seemed pricey, and to make it worse, pathetic weather made sure that I did not even get good images. In short, I just visited it for the sake of it and I am not really too happy with the trip but I am sharing it anyway in order to help others.
So, we were in Phe Phe Falls, we were trying to visit Krang Suri. I am not sure what is the issue with this falls that it always eludes me. It has failed before and this time also, it did when I was barely 10 km away. The weather was terrible in the morning. It was bitterly cold and the visibility was almost zero. We water for a while, having a slow breakfast, waiting for the weather to clear but nothing changed. At around 10 am, we finally came out to the road. It was still drizzling and very few vehiçles were running. After several failed attempts, finally, one car stopped and gave us a lift to the town of Amlarem.
Krang Suri was a few kms away from here but with unfavorable weather, I gave up yet again. After w while, we found a shared car going to Dawki  and decided to go ahead. Dawki is located at a lower side near the Bangladesh border. So, visibility was better here although it was still raining.
It was afternoon and the bulk of the day had bee water ready. Dawki did not seem too exotic and so we decided to go to Shnopdeng. However, there was a problem. The 10 kms between Dawki and Shnopdeng has been cartelized. Everyone was demanding 400-500 for this small distance and after almost an hour, finally, one guy agreed to drop us at 250.
For the uninitiated, Shnopdeng is a small village near Dawki and it is also like cared on the bank of the same Umgot river. It is away from the town and so has a better ambiance. It was around 3 pm by the time we reached. We thought we will quickly take a room but they seem to be pretty expensive (for my budget). We decided to walk down to the rocky riverbank, where numerous tents had been set up. This followed by another round of negotiations. The problem was that people were demanding 1000-1500 for bigger tents and small 700 tents were good for only one person. Finally, we found a guy who allowed a bigger tent for 700. It was almost dark by that time and this is how the day ended.
As it was January, it was dark by 5 pm and it was a long evening of taking walks along the river bank. Thanks to the tourism boom, it was still teeming with people though and the eateries were full of tourists. All the eateries also seemed to be offering the same 2-3 types of food items including Maggi and rice. The sky seemed to be clearing towards the night and for a while, I tried to stargaze… but the cloud cover returned soon and I fell asleep soon.
The next day so the weather remained gloomy and we had time till noon, so we decided to roam around the place and take photographs. The big hanging bridge is the prime attraction here because you can have good views from the top. Campsites have now also opened on the other side of the river, although it has limited space. 15 minutes of sunshine would have done the trick for me but it was not to be.
There was another bridge, a bamboo one, over the Umngot. I am pretty sure this one gets washed away during the rains but has been constructed for the winter and there was one guy waiting there to collect INR 10 from everyone who was crossing it!  My suggestion would be to stick to the big suspension bridge and try the bamboo one early morning when the toll-taker is not around.
The last thing that remained here, and that I could have done, was the boat ride over the crystal clear Umngot. However, I was already in a homicidal mood due to the weather and so I gave it a pass. Also, a lot of people were already lining up for that and would have taken ages to get a slot. Read teh below section for more details about boating.
The return was again a long affair. Apparently a few shared cars leave early in the morning. There was nothing at noon and most of them were demanding 400-500 for dropping us at Dawki. Finally, a local pastor, who was going to a nearby village to attend some marriage, gave us lift and finally we managed to reach Dawki, from where we readily found a shared car to Shillong.

How to reach Shnongpdeng?

You will get shared cars from Shillong to Dawki (82 KMs) costing around INR 200-300 (I have seen that some drivers raise the price depending on the situation). If you take the first option, you will also find the diversion to Mawlynnong at one point.

The village of Shnongpdeng is around 8 KMs from the small roadside town of Dawki.  You can just walk or look for lift to save money. If you can get into a shared car with locals, it won’t cost you much. However, they generally remain packed. If you hrie a car on your own, they can charge anything between INR 200-500. Try to bargain.

You can also take the Shillong to Jowai to Dawki route (122 KMs). But do it only if you want to explore Jaintia Hills and you will need more time at hand for this.

The road to Dawki from both sides are generally smooth. However, the road between Dawki & Shnongpdeng is a bit bumpy. Especially, if it rains, it can worsen and this gives the cabs an excuse to charge more.

Where to Stay in Shnongpdeng?

The village of Shnongpdeng has many homestays while tents have been set up at the river bank. Prices have increased of late due to high demand. From what I could understand, here are the usual rates…

Double room in a homestay INR 1000

* From what I could understand, the double-fitting tents are not that big and actually the triple tents are comfortable for two people, which we managed to get for the price of the double tent after a bit of bargaining because it was empty anyway.

* Do note that these are generally accepted rates and if you seem new & clueless, someone can always ask you for more. So, you can try to bargain in that case.

* There is another small village called Darrang a couple of KMs before Shnongpdeng, which may also have stay options along with a living root bridge. However, we did not get the time to explore it.

Do we have bathrooms near tents?

Yes. There are a couple of public bathrooms that all the tent-dwellers use. I guess it is maintained by the village committee. I think it is a good thing for keeping the village clean because otherwise, every tent provider would have opened toilets all over the river bank.

Where do we charge our phones while staying in a tent?

We gave it to the tent provider, who charged it at his home and returned to us after a couple of hours.

The best season for visiting Shnongpdeng?

While you can visit anytime, generally the monsoon months between June to September are avoided. The river swells up in the rains, making boating impossible. Transparency and colour of the river is also affected and roads can also get damaged. Also, in this season, visibility is not very good due to excessive rains.

Phone and data connectivity in Shnongpdeng

Phone and data, both were working perfectly fine for me.

What kind of food is available in Shnongpdeng?

There are several eateries in the village but food options are actually limited. Everyone offers a standard meal INR 100 for vegetarian one and INR 150 with chicken. Additionally, you can get instant noodles, eggs & tea.

How much does the Boating Facilities cost at Shnongpdeng?

From what I could figure out, boating rates can fluctuate here depending on the crowd. Generally, one boat fits 5-6 people and one ride last 30-45 mins can cost 500-800. If you are alone, you can try to fit into a group and share the cost. Also, someone may try to extract more money from you. So, always aks multiple people before finalizing.

For a more detailed guide about the enire Dawki Area read this.