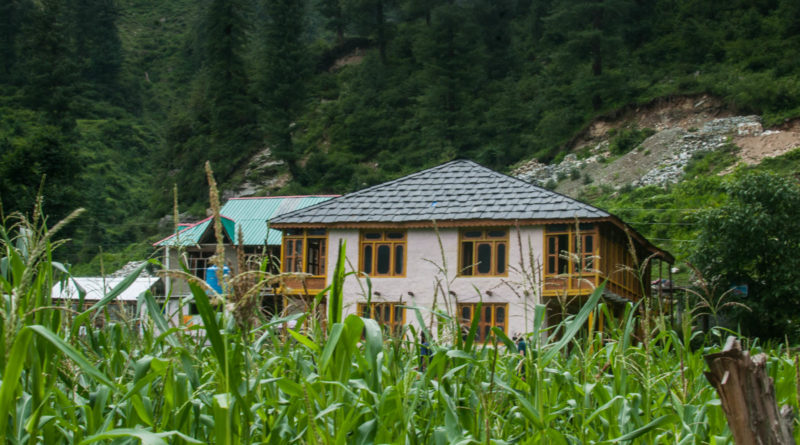 One of the primary intentions of returning to Kasol was to complete the Trek to Grahan Village. It was one of the major day treks that I’d missed on previous occasions. have expressed my disappointment towards the excessive commercialization of Parvati Valley on many occasions. I had almost made up my mind not to return here after last year’s Kheerganga Trek. However, a couple of major villages had yet to be seen and so towards the fag end of this summer I made another quick trip.

For a trail located in such a popular region, I’d actually had to struggle to find the necessary information about the Grahan trek. According to some of the contacts I asked, it was pretty easy and can be done in two hours. But some others asked me to not even try it alone! And none of them could tell me how many kilometers will I have to cover. I figured out that the truth will be somewhere in between these two extremes and decided to go for it.

So, I started the trek on a not so fine morning. It was a bit too late for the season. It was July already. The monsoon had more or less arrived, threatening to rain at any moment. Also, the trail was not as scenic as I’d expected it to be, due to the season. The vibrant flowers of spring and early summer, that delighted me in places like Chalal and Rashol back in 2015, were gone. The trail was wet and the vegetations on the slopes were trying to reclaim the trail too.

I initially even missed the original route, just a while after crossing the bridge near Kasol. I reached the river and was trying to find mine through a non-existent trail along the river. However, after a while, I realized the mistake and traced back my way to reach a point where there was a faint marker, asking me to go right and go higher up, leaving the river behind. So, in case you are ever in doubt, go right. 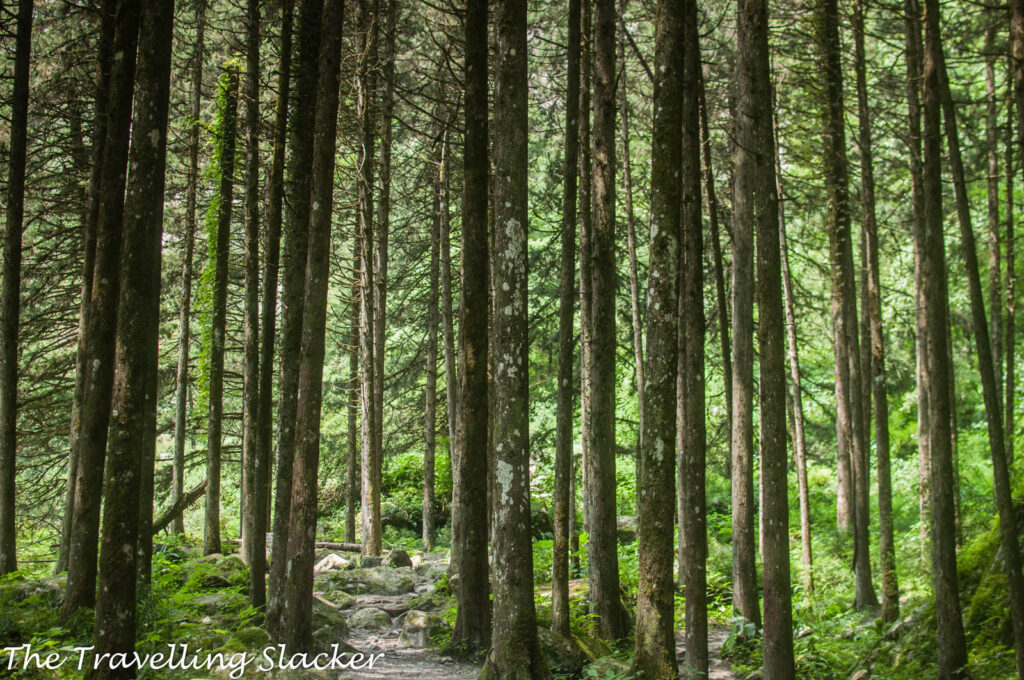 After a while, I reached a point where there were several large butterflies, all from the same species. They were larger than the usual ones, almost 4-5 inches in diameter, and of resplendent olive-green wings with white dots. If somebody knows their name please drop a comment. Anyway, this sighting improved my mood and I started pushing myself harder. 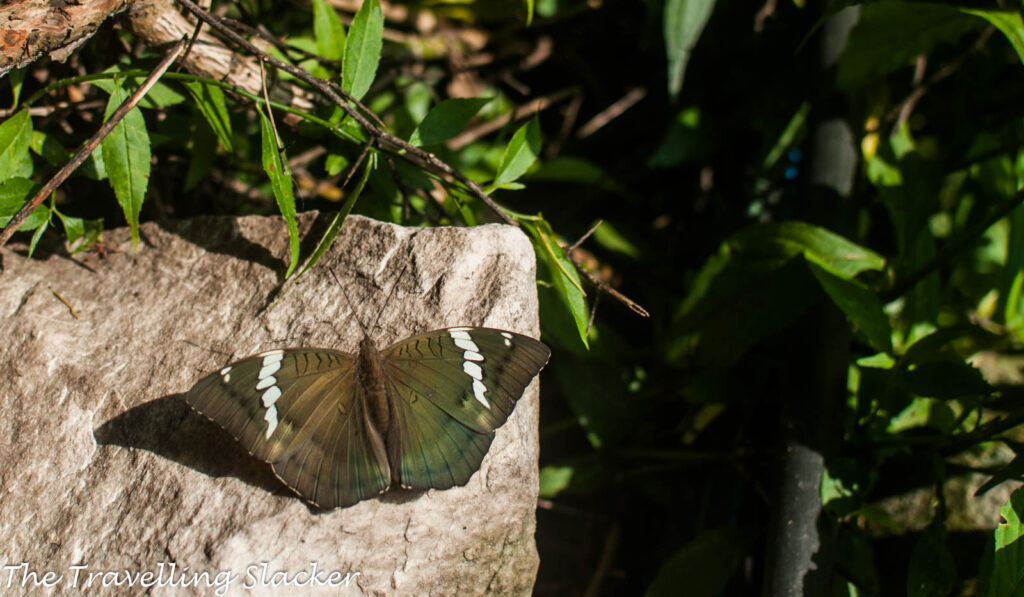 Although I moved away from the bigger river, soon I came across other streams. I think it is due to the season but the expected turquoise blue of the river looked more like the yellow of apple cider, not that I mind that. The first bridge I crossed also seemed to have been freshly constructed. Surprisingly, till then, there seemed to be no other trekker on the route.

The hike along this stream continued for a while. I gained altitude and then lost it too. Finally, I reached a small shack, selling nothing more than tea and packed snacks, which was apparently the midpoint of the trek. A few years later, I came across a bigger camp, that also has accommodation options. None of them really looked too inviting to me and I carried one. 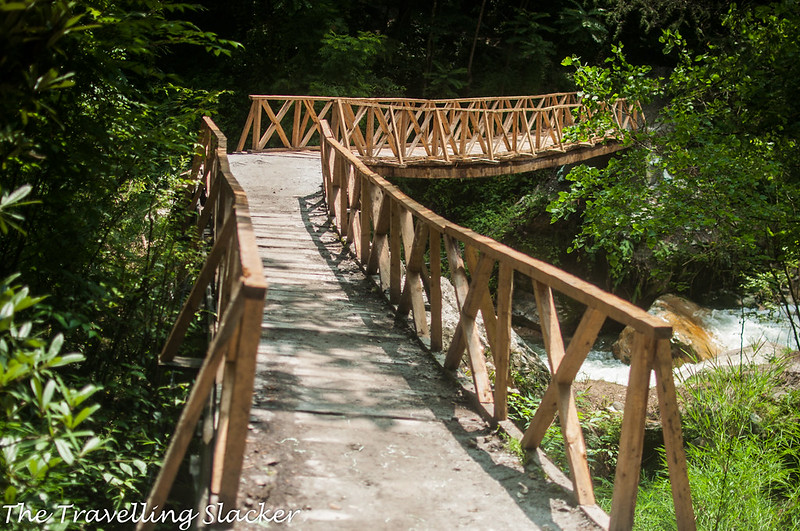 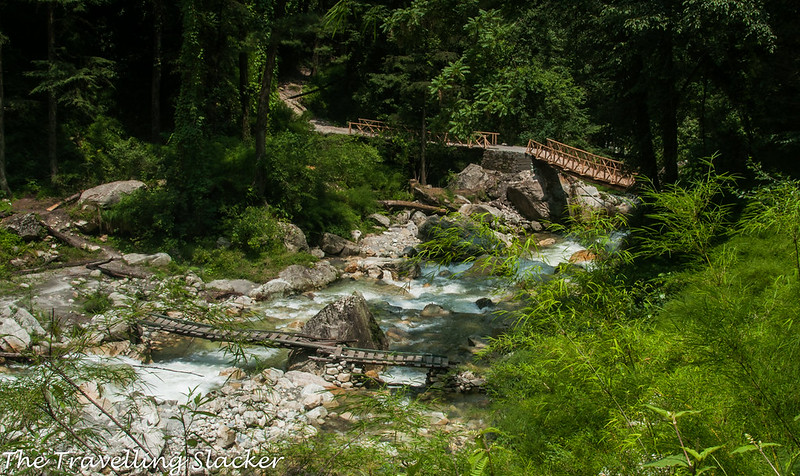 After almost two and a half-hour of trekking, I finally reached the famed point where the route bifurcates and two perpendicular trails proceed towards, well, the same place! Basically one is a shorter but much steeper route that directly reaches the village. The other is a longer but comparatively easier trail that also reaches the village but from the other side. It reminded me of the tougher route that I took for Malana once.

Some other trekkers were returning from the village, having spent the night there. They all seemed tired, but they were also probably first-time trekkers. Otherwise, I can’t see why the descent can be so tiresome. Nevertheless, they sincerely advised me not to take the shorter route. I listened to them and went for the longer one. It took more than an hour and at one point I was beginning to wonder if I’d missed something. But that is exactly when a cow came out of nowhere. I knew the village was not far now and after another turn, I finally came face to face with the village.

However, reaching the village was still problematic. Parts of the trail were too muddy due to recent rains. Instead, I left the trail and started climbing towards a good looking wooden building which turned out to be a homestay. There was no one out there but then I saw a few Israelis, as one can expect anywhere in Parvati Valley. I followed them to reached another homestay which seemed to be functioning. Not that I was planning to stay, but I needed some refreshments after the trek.

I seemed to have reached the outskirts of the village by taking the longer route. The main village was still a bit far away and these parts were mostly agricultural plots. In terrains like these, not much land is available for cultivation. So, they seem to be using these parts very extensively. Apart from the omnipresent apple trees, they were primarily growing maize. The few wooden houses amidst the fields have now been converted to homestays. 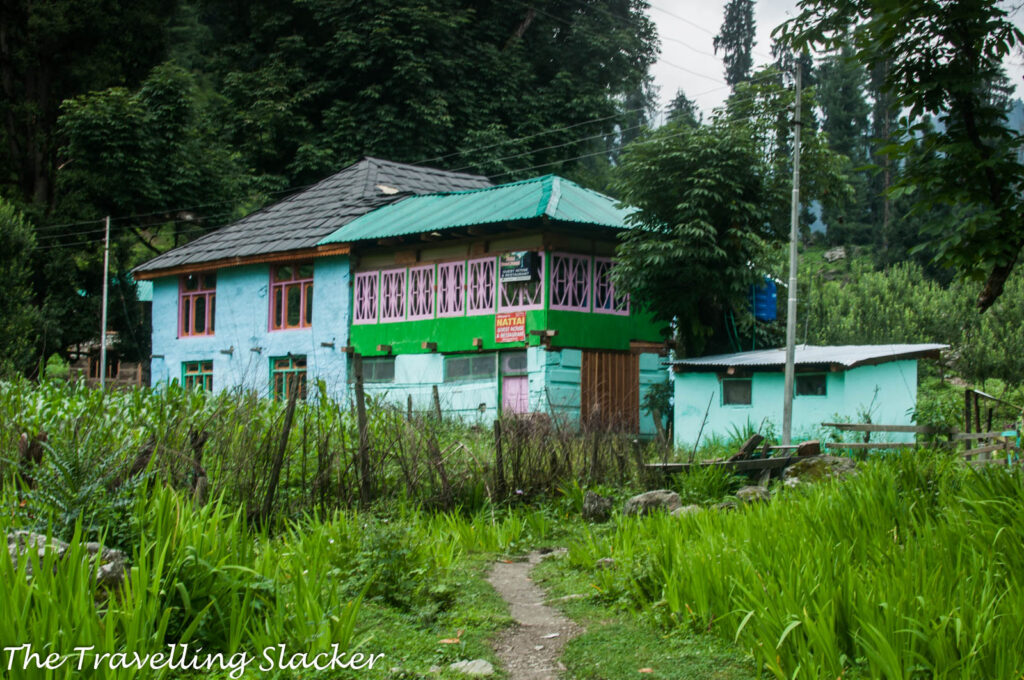 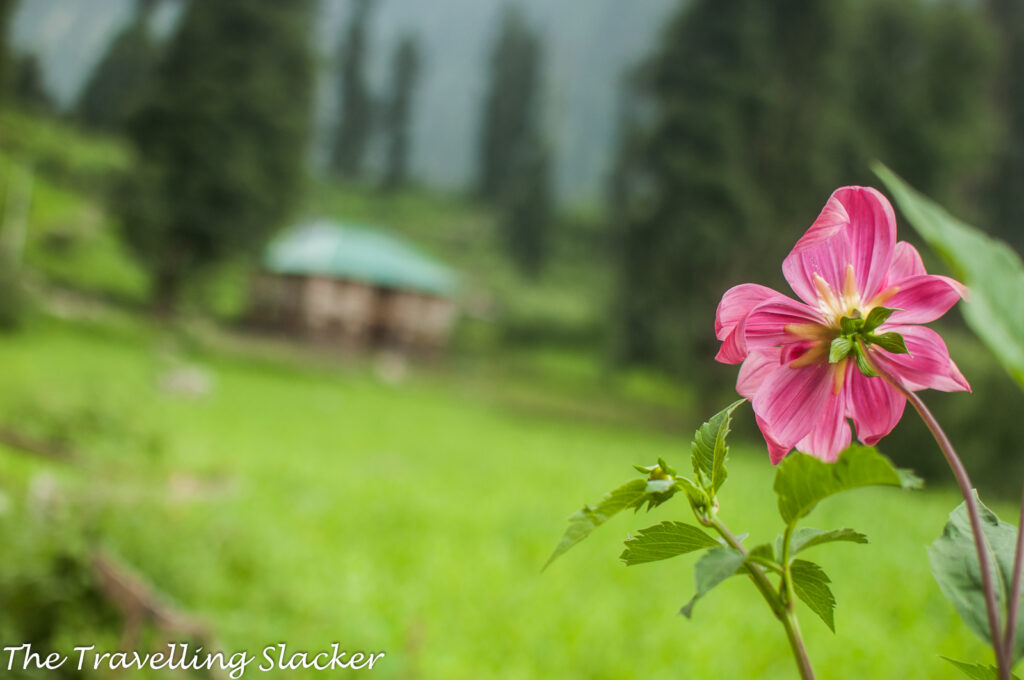 After a short break, I quickly entered the main village, which seemed a bit too densely populated for my liking. Also, I felt the atmosphere to be somewhat subdued and not very touristy. However, it may also be due to the rainy season. Unlike other places in Parvati, nobody also tried to sell me “that thing” that the Rastafarians appreciate. As a matter of fact, this is what differentiates Grahan from the rest of the places out here. There are signboards all along the trek warning the visitors against drinking. I don’t think they can afford to be totally Gandhian in practice but they have maintained a semblance of order so far. This is why a lot of visitors prefer to stay here rather than in Kasol. Hebrew signboards are visible here too. So, it is surely frequented by the ones from Isreal.

I found half a dozen more homestays inside the village as I quickly passed through its narrow alleys. Some of them seemed to have similar names. I enquired a bit and the general rates seemed not to be very high (INR 300-400). Grahan is also known for the honey they collect from the forests although I had no plans to add more items to my backpack so I did not enquire about it. 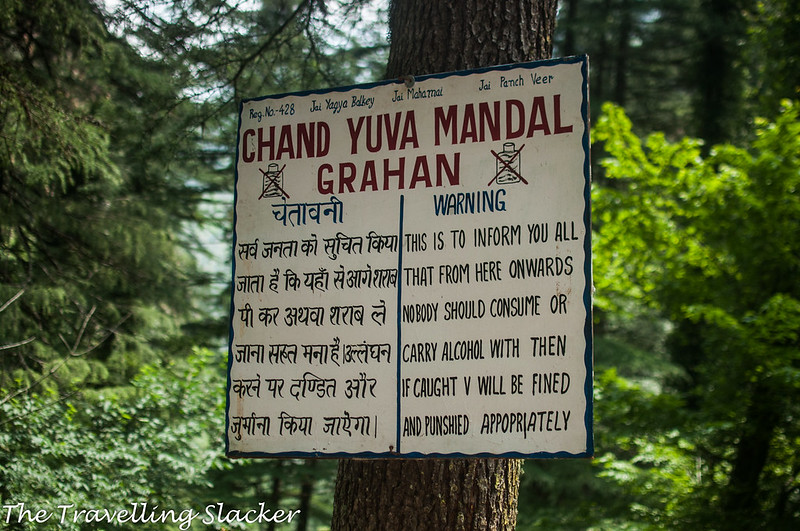 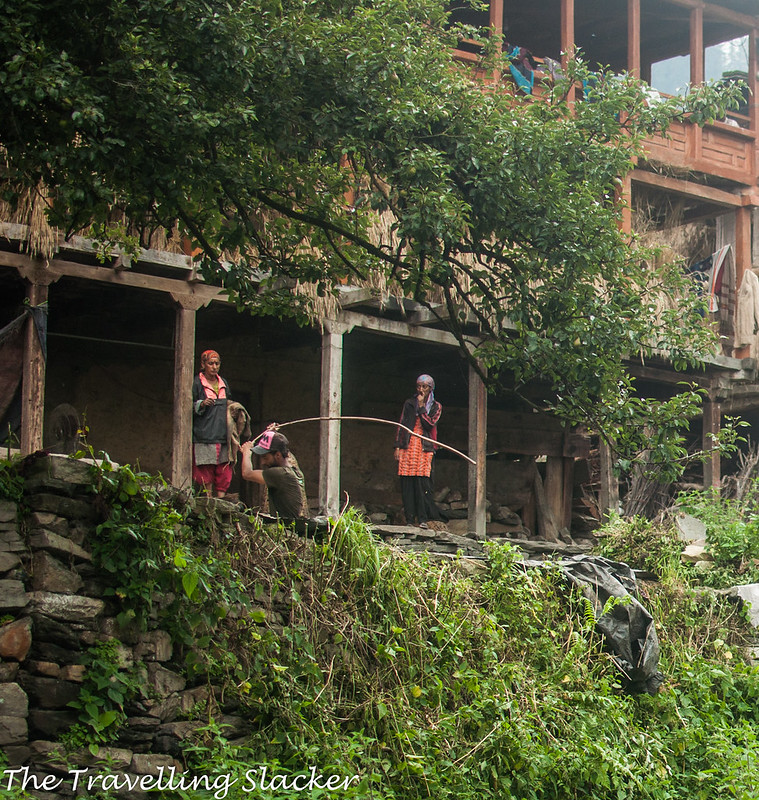 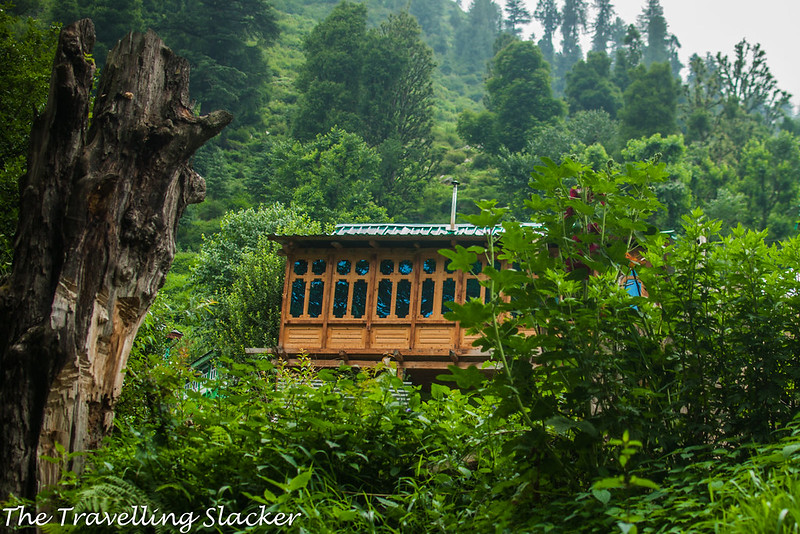 I crossed the village and reached the other trail, the steeper one from the other side. I spotted a solitary iris, probably the last summer blossom of the season. I was thinking of a quick descent but the rains started. Interestingly, I happened to have an umbrella with me. This is something I almost never carry even when I am in a city but that day I had one. I can’t explain why I had that but I had to open it to protect myself from the wind and the rains. It was an aerodynamic disaster and it slowed me down completely and I ended up taking the same amount of time as the shorter route. But on the positive side, I did not get wet. 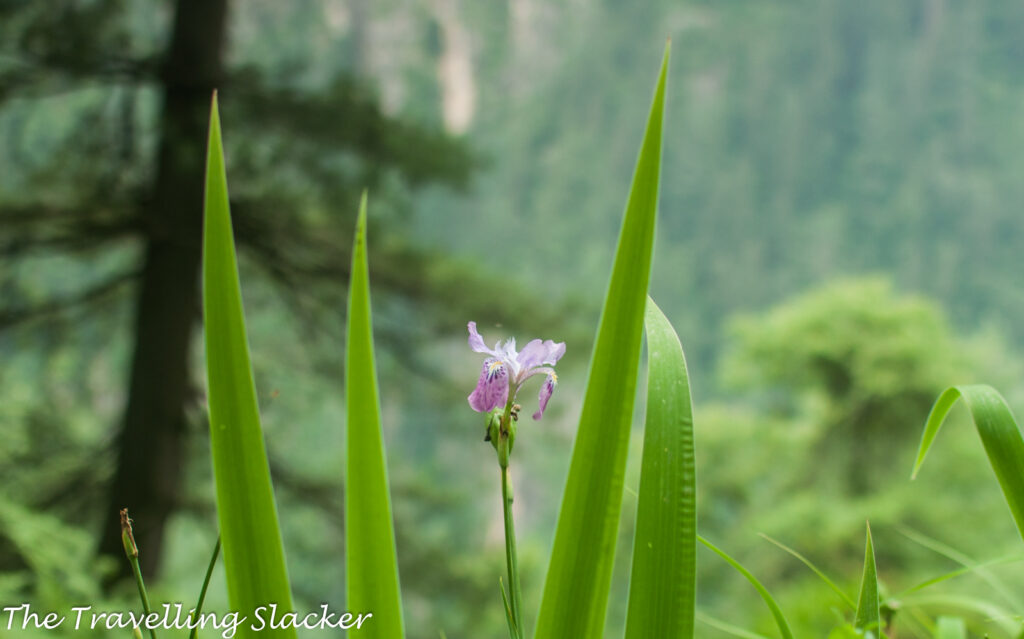 Grahan was a quick day trek for me but I guess I could have stayed there for a night or two. On hindsight, I think the trail is somewhere near 8-10 KMs. It took me slightly more than 4 hours to reach the village and more than 3 hours to come back to town. I think you should pay a visit to Grahan if you need a break from Kasol and its more easily accessible neighborhoods. In case you are wondering, your phone isn’t going to work in Grahan either (except BSNL probably). The charm of Grahan lies in the fact that it is located deep inside the forest that can help you feel a sense of total disconnect, which is a much-needed relief.

PS: Grahan is also the base for Sar Pass Trek, which is a long, multi-day affair.

9 thoughts on “Trek to Grahan: Far from the Madding Crowd”