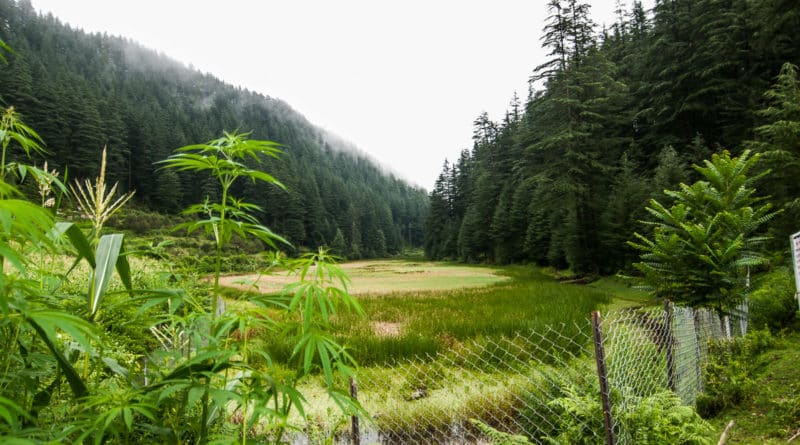 Himachal Pradesh Indian Himalayas Kullu
2019/09/052019/09/05 Jitaditya Narzary 1 Comment GHNP, Great Himalayan National Park, Jhili Neahi, Pundrik Rishi Lake, Sainj Valley, Upper Neahi
So, I was finally back at Sainj Valley! After that glorious afternoon at Shangarh Meadows, for the last couple of years, I had been planning to return but could not. This time, with rains blocking the higher reaches of Himachal during my ill-timed August trip, I decided to wind up with a day or two in Sainj. As I had been to Shangarh before, I wanted to stay in a different village and eventually I decided on a homestay in Jhili Neahi, which was apparently a short hike from Sainj Ropa, although I could not find it on the map. Usually I never book stays and just arrive at the place and figure out. But as the availability was suspect, I contacted the guys on FB and prebooked a stay the previous day.
I reached Sainj via Aut on a bus and had lunch at the market. Unfortunately I had picked a Sunday for this and the buses were infrequent that day. After a bit of effort, I got a shared car and reached Ropa via Siund, which is around 7kms further from Sainj. I reached the GHNP Tourist Center at Ropa (one can stay here too) and I called Gyan Bhaijee, who was my host up there at the village. The road to the villagebifurcates from the main road from this point.
He arrived soon and then after a bit of discussions, I figured out that there were two options for me. One is to hire a car for a rickety ride along a not so pleasant but motorable stretch of around 4-5 kms up to the village ad the other was a 2km hike along a shorter route with all my luggage. I learnt that the cars demand a lot of money for this additional stretch, so I decided to hike anyway. It is a daily affair for him but for me, not at my best, feelings bit unwell, and with my luggage, took almost an hour and multiple breaks to finally reach the village. His house was one of the bigger ones in a village, and also located on the higher edge of the village.
His better half offered a cup of tea and I was given a room. I was also gladdened by the sight of a traditional loom just in front of my room. Apparently they don’t do it professionally but they weave the shawls etc for their own needs. The entire village was on a slope, so the space was limited but the views were excellent, although a clearer sky would have made it better.
The village, like most others in thsi region, look capable of sustaining on their own. Limited open land is available as the village is located on a slope but they seemed to be utilising the small patches well. The food offered at night also was made out of local stuff including beans to cucumbers and as expected there was a bowling homemade ghee and unexpectedly there was even a bowl of local wild honey.

The next day was the only day I had to explore anything. I seemed to have developed a headache overnight and it had also started raining heavily in the morning. As I got up, I was greeted with almost zero visibility. Thankfully the rain stopped by the time I finished my breakfast and Gyan Bhaijee asked me to follow a local guy and some school kids upwards. They were much faster than a spent force like me but nevertheless, I tried hard to keep up. This is exactly when I realised the other big problem I seemed to have developed. The camera was not working!
I clicked some mobile pics and kept following them but I was having serious doubts about the whole trip. Anyway, after around 45 minutes, we reached an open meadow, miniature version of that in Shangarh and something very similar to the meadown around Hadimba Temple in Thachi Valley in shape, size, and texture. This is what they referred to as the maidan back in the village and walked me to visit. The school of the kids is also located here along with a small shrine. This is apparently called Sarahan, which problematic because thsi is the third Sarahan I came across apart from the original Kinnaur Sarahan and Baga Sarahan or Kullu Sarahan  accross Bashleo Pass. At this point, I climbed up a bit and decided to try the camera again. This time, even to my own surprise of worked! It did make some painful noise but it was clicking again and then whole trip was back on track!
The kids and the other guy were coming to this point only but he directed me to go beyond the cedar grove in front of me to reach the “jheel” (Lake), which basically means the Pundrik Lake. The other side of the meadow is a small stretch of maize cultivation, followed by a deep gorge and mountain beyond. I saw a group of people carrying a small idol of the local Devta. I have seen far larger processions in the past where they carry the idol on palanquins but on this occassion they seemed to be in a hurry. They passed me quickly and disappeared into the woods.
I saw another shrine in the middle of the wood and a bright grassy patch was visible through the trees. After literally beating around the cannabis bushes for a while, I located the trail, climbed down from the other side, and was finally in front of the that classical frame of the Pundrik Lake that I had seen on various locations.
Now, the origin and nature of this lake raises various questions. Firstly, this is hardly a lake as of now but a grassy marsh but the vegetation out there is unique and are reminiscent of the moving island in the middle of Parashar Lake. The lake is narrow and around 1 km long if you walk along the longer edge. There is a small wooden shrine nearby and the lake is protected with barb wire and you cant get inside anyway. The good thing about it being a sacred one is that there were no plastic packets here. The most noticeable plants on the peripheries of the lake are the Rastafarian ones.
But what is more mysterious is Pundrik himself? Who was he? I can see that Pundrik is rarely mentioned in other states but is somewhat prevalent in the Himalayan states, and somewhat surprisingly, Maharashtra, although I am not sure if both are the same. Some of the clans in Northern India also claim their ancestry from Pundarik.
Anyway, I noticed one more guy arrive and walk past me along the lake. I asked him and he said he was going towards Upper Neahi. Now, this is the village I have heard of many times. One homestay here is famous where some people I know have stayed before. It was a km from that point, just a sort out all after the lake. However, due to the rain earlier in the morning, the entire stretch was muddy. After a lot of effort and after completely changing the colour of my shoes, I finally crossed that stretch and arrived in front of Upper Neahi. The weather had deteriorated by then and so I was not sure if I could do much here. I talked to a few locals and ne of who suggested some trek to a waterfall but I was other things in my mind. I think the best way of getting more from this village will be staying here for a couple of days but I was already staying in another. So, I decided to walk back after a while.
Is that it? Not really. This was the more obvious part. After this, I decided to walk towards the other village that I didn’t have much clue about and also found one extra village. More about those two villages soon.
To be Continued…

What and where exactly is Pundrik Rishi Lake?

Pundrik Rishi Lake is more of a marshi grassland rather than a lake, located deep inside the Sainj Valley, which is a part of the Great Himalayan National Park, a UNESCO World Heritage Site. May be there was a lake that is drying up but the vegetation is unique. It is dedictaed to Sage Pundrik and is considered sacred by the locals although the exact origins are hard to figure out.

How to reach Pundrik Rishi Lake?

Where to stay for Pundrik Rishi Lake?

You can explore the lake and the nearby villages by spending a few days here. Homestays are available in Jhili Neahi and Upper Neahi Village. You can also stay at the official GHNP Tourist Rest House at Ropa down the road.

Sainj Valley: All You Need to Know