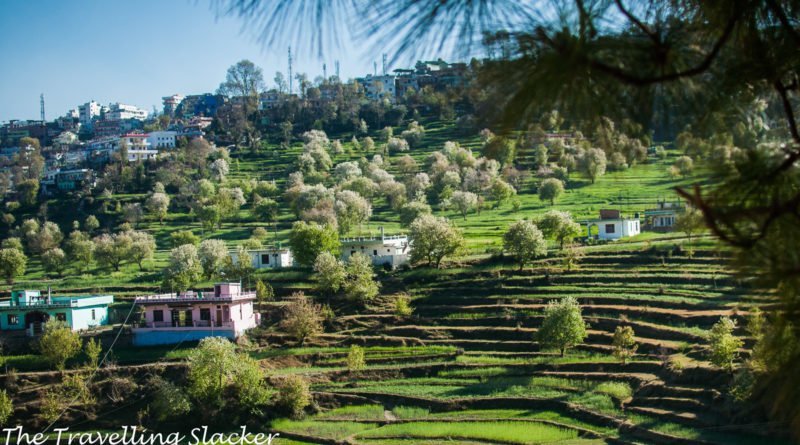 I’d entered Kumaon at the onset of spring but mostly found disappointment due to various reasons, till the point I cut down my ambitions, looked around, and started appreciating the beauty of low hanging fruits, both literal and figurative ones. Pithoragarh actually surprised me when I finally opened my eyes and gave it the time it deserved. All it took was an impromptu, unlikely hike through an unmarked trail that finally ushered in the spring for me. All other trips post this moment delivered better returns. There was something sinful, erotic, and pagan about those slopes that made Stravinsky ring in my ears. These photographs fail to do justice to the agroerotica I witnessed but I must try.

Anyway, let me first get back to my first encounter with the town. I arrived at Pithoragarh after a few days in Champawat. My first impression was not very pleasant. The point where the bus left me is surrounded by buildings and markets and the best parts of the town are not visible from here. Also, it was a reasonably big town, a bit too big for my liking. I was also unwell for a few days so could not explore it much. From here, I made trips to Munsiyari, and Jauljibi, with mostly unsatisfactory results. However, by that time I’d noticed that the town presents better views once you climb up to Siltham market from the bus stand and walk towards the road leading out to Dharchula. So, on my last day in town, I decided to take a long walk around it.

Pithoragarh, which is the headquarter of the eponymous district, is an important town for various reasons. It is the largest town in the northern Kumaon and if you are heading higher up for more serious adventures, it is the last town where you will find all necessary amenities. It is also a major stopover for the Kailash Mansarovar Yatra in the summers and in the ancient times, the trade caravans from Tibet stopped here too. The town has grown rapidly in recent times and the concrete jungle often misleads people into ignoring it completely as a place to be explored.

I started my exploration by visiting the 18th century Gorkha Fort. As this area is not very far from Nepal border, the Gorkha influence is obvious here. This fort is located on a hilltop overlooking the town. Sadly, some renovation was going on inside the fort and I was not allowed to enter the inner parts. I did explore the outer walls and noticed some memorial plaques, mostly remembering fallen heroes of the world wars. The Kumaon region has a reputation for supplying a lot of soldiers to the armed forces. The Kumaon Regiment has been an important part of the Indian Army since the days of the Raj (The first-ever Param Vir Chakra winner was also formed Kumaon Regiment). On one side of the walls, there is a playground attached to the fort, complete with a gallery, most probably used for Ramleela. When I visited it, some cultural programs pertaining to Holi was going on out there. There are many ancient temples and shrines too in and around the town although I could not find the time to explore them properly. 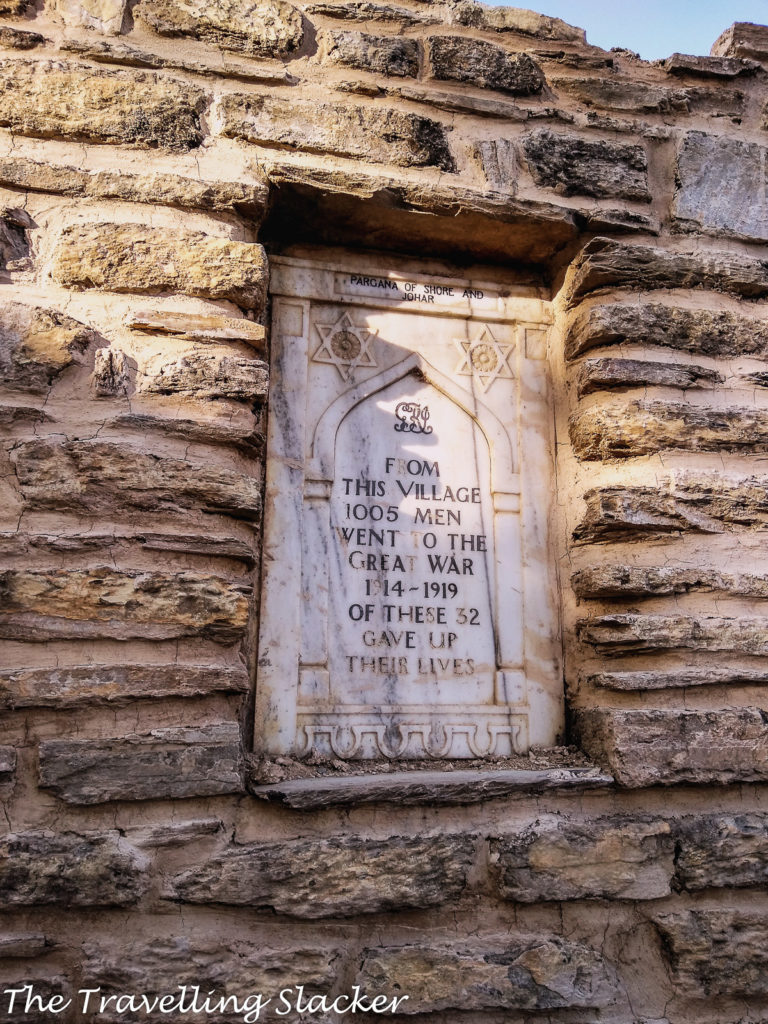 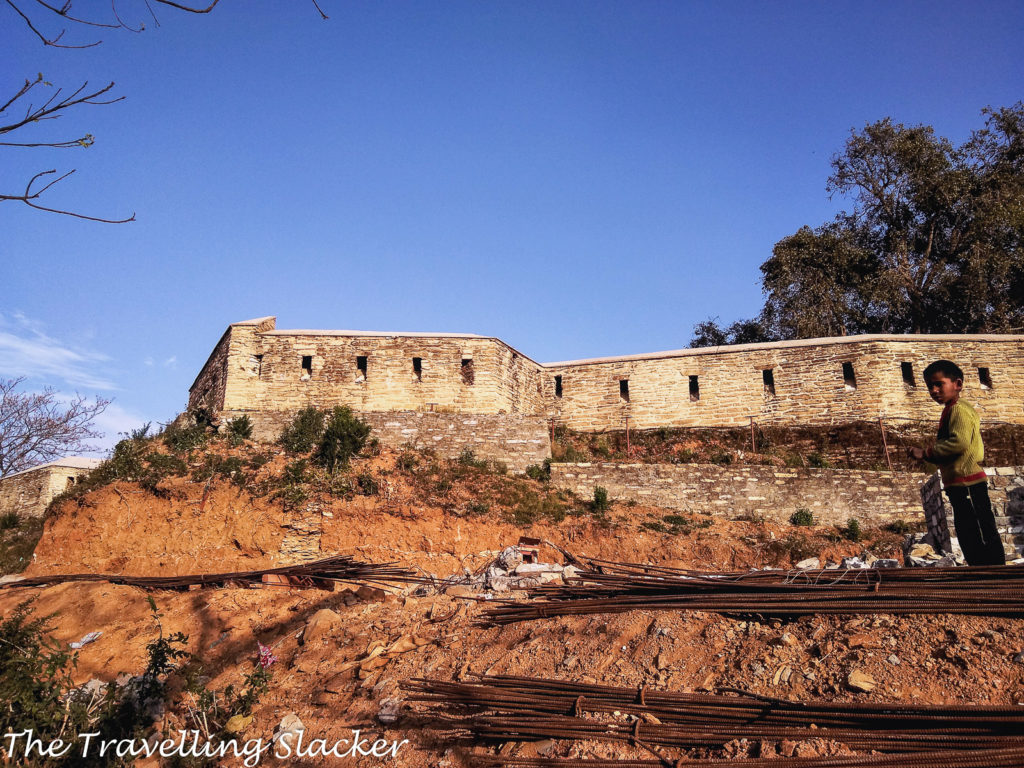 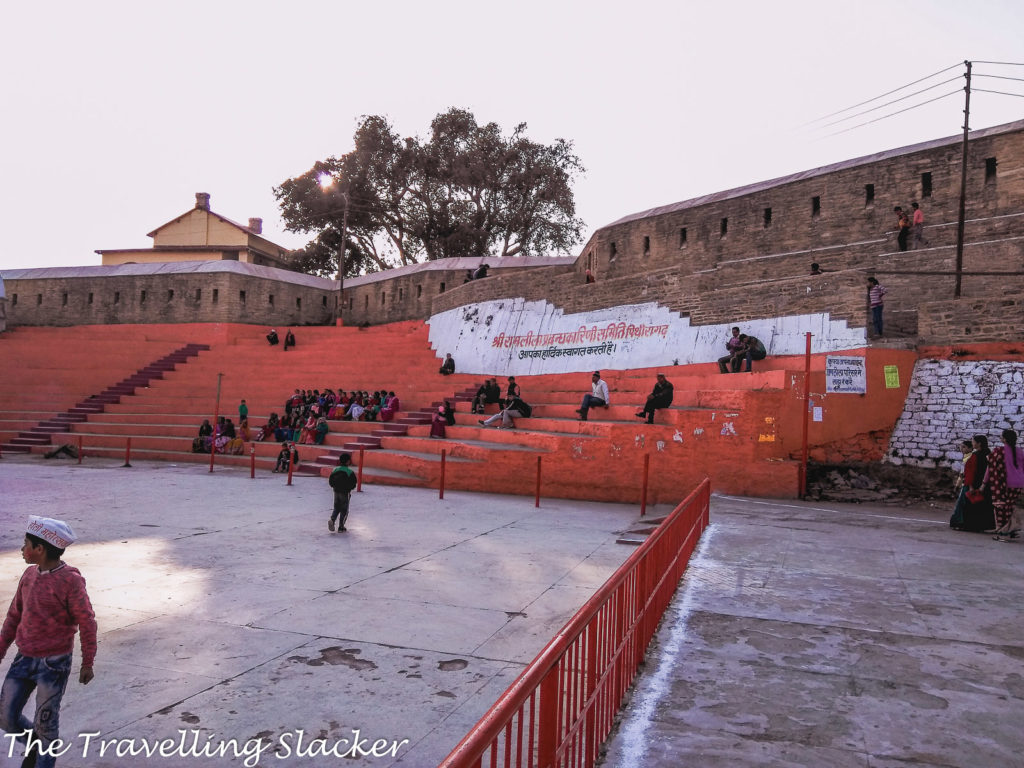 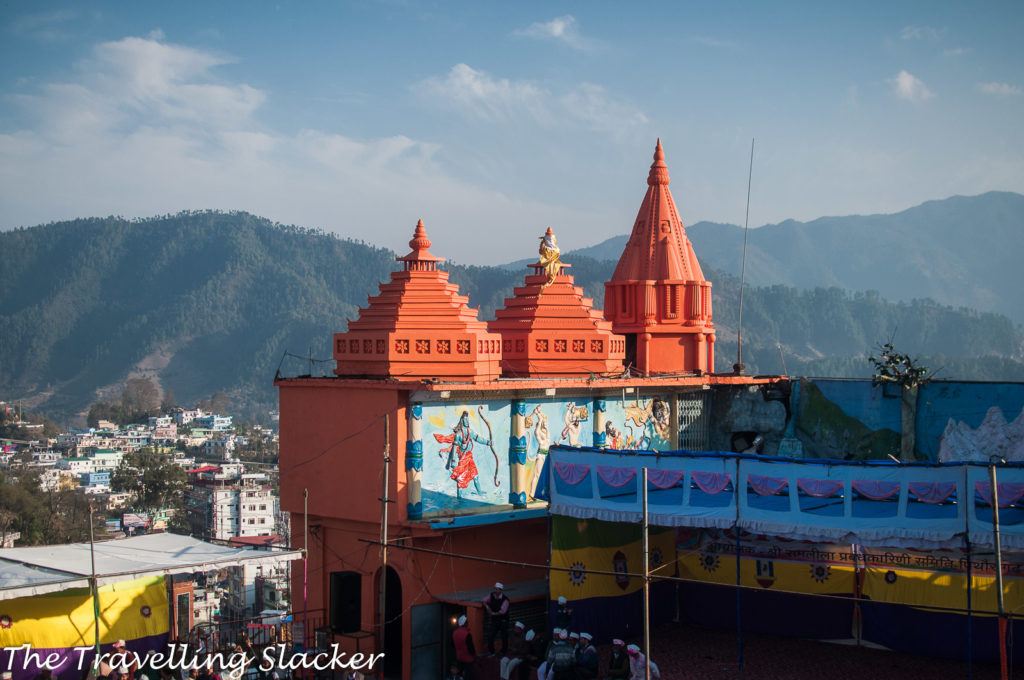 After a brief visit to the fort and some local sweets at the market, I finally started along the route I had in mind. A short 100 metres helped me escape the confines of the market and stare at the open valley while standing at an advantageous elevation. While the hint of distant peaks had its charm, what particularly attracted me was the sheer spring pastures within the town. The main market is located at a higher altitude but the slopes of the hills are still used for cultivation. Although various constructions are scattered around them, the bulk of this land is still used for agriculture and this is what makes the landscape worthwhile. 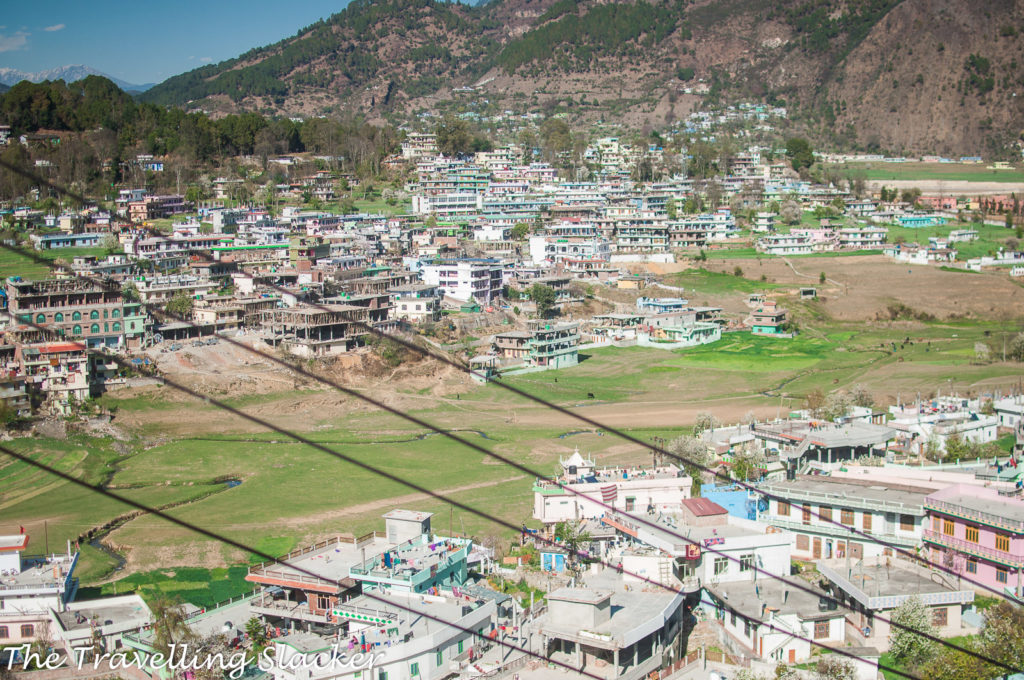 While one can’t expect much during the harsh winter in the hills, the spring is always generous. While the slopes were green with freshly planted crops, dotted with a lot of blooming trees, mostly peaches, pears, and plums, important cash crops of the region. I felt a desperate urge to observe them from a close range but could not exactly figure out how to reach. Many small trails were going towards that stretch but I keep walking on the main road, hoping to find a clearer route. In the process, I practically went out of the town and found myself in front of a pine grove covering a small hillock. I took left and kept walking, following my instincts and finally found another trail that was going in the right direction. 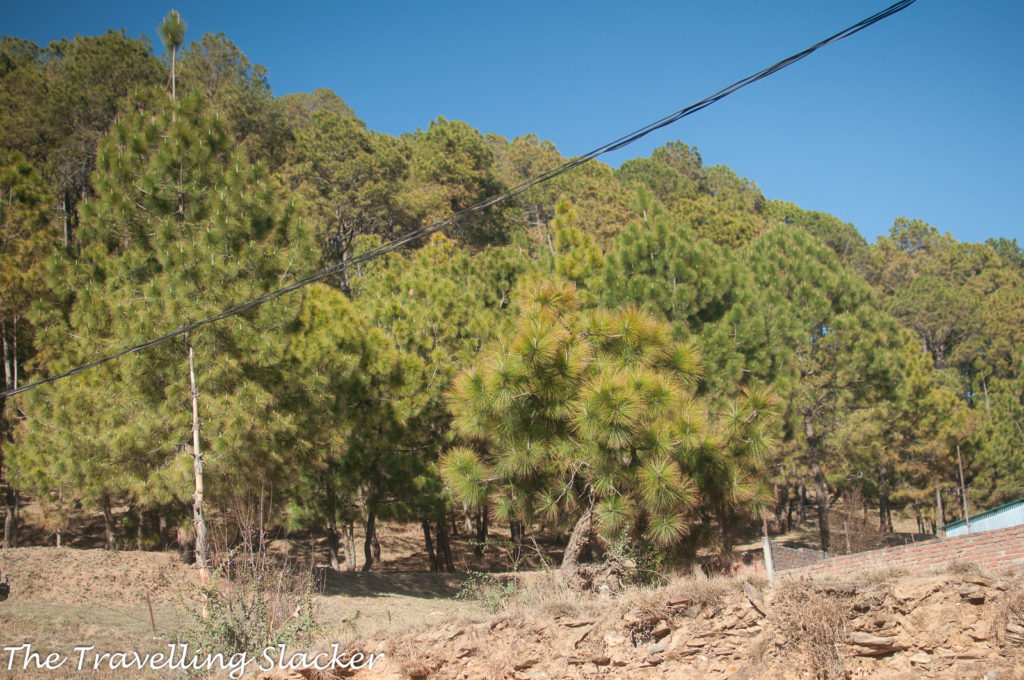 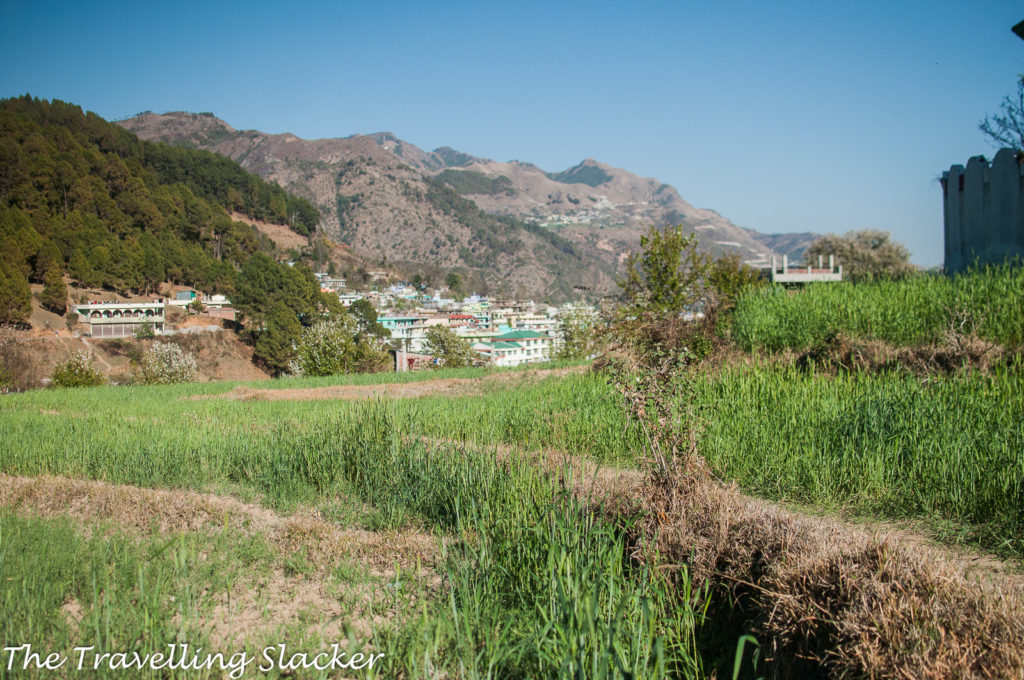 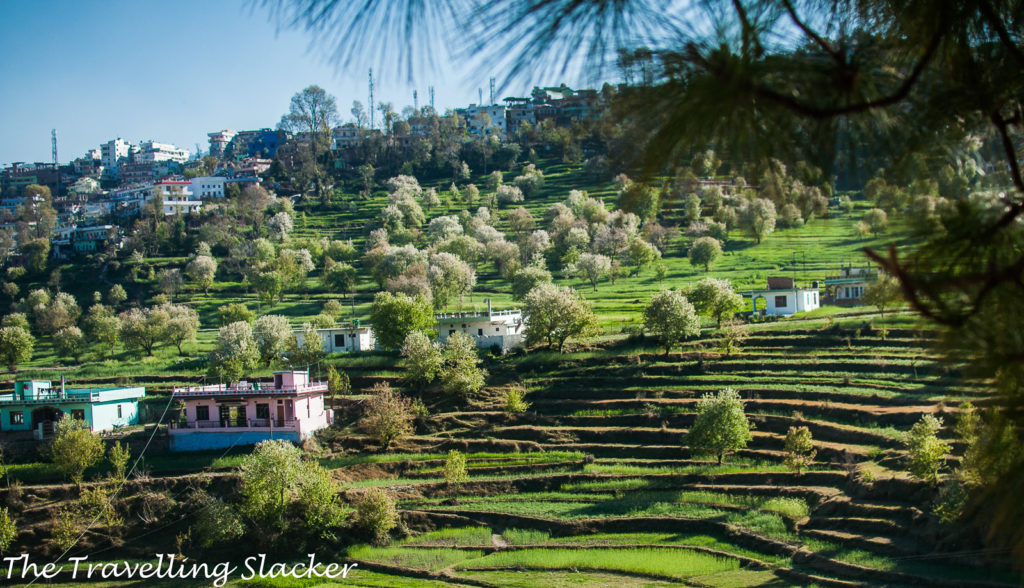 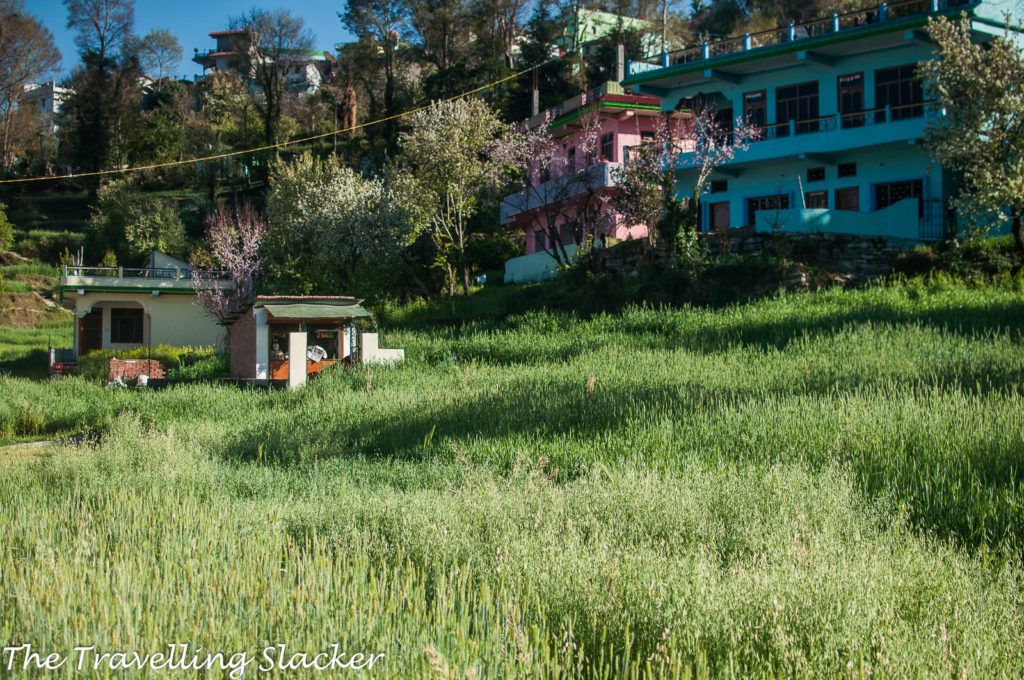 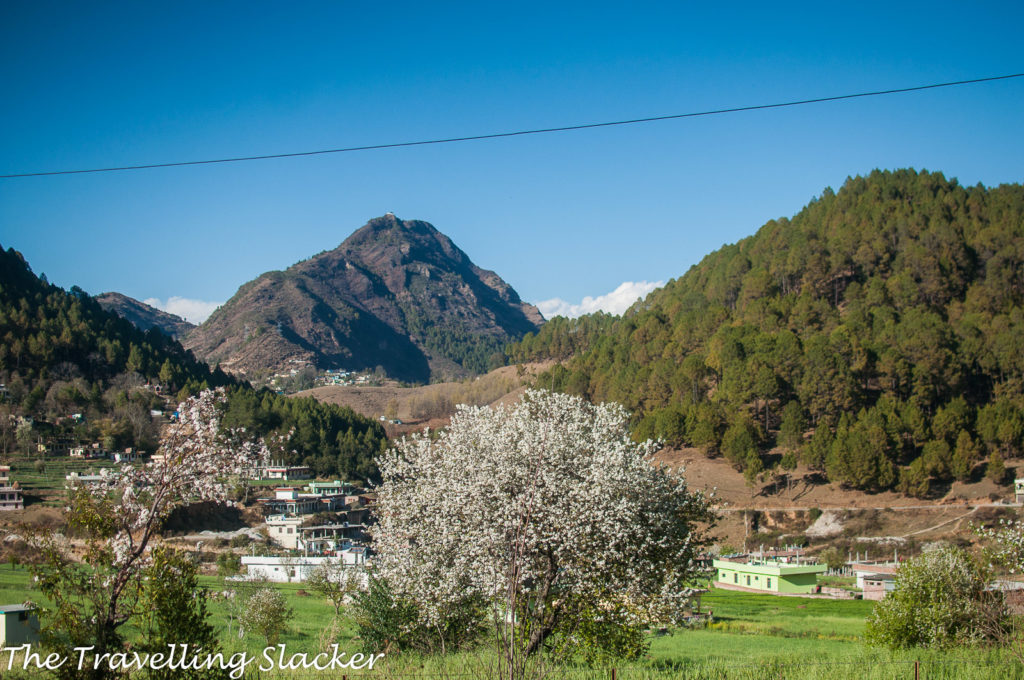 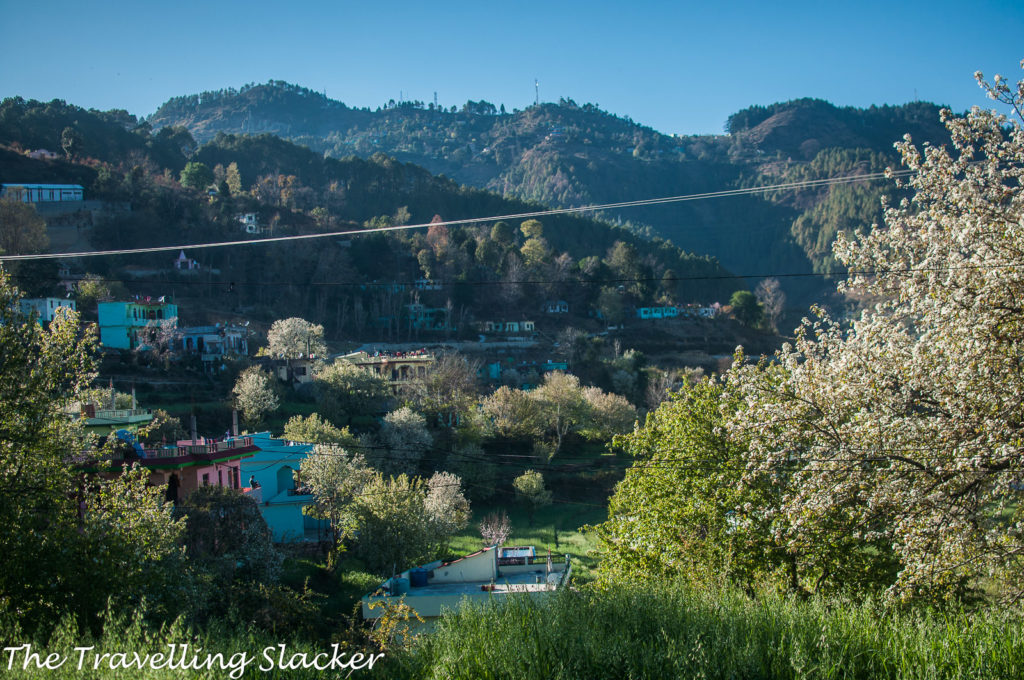 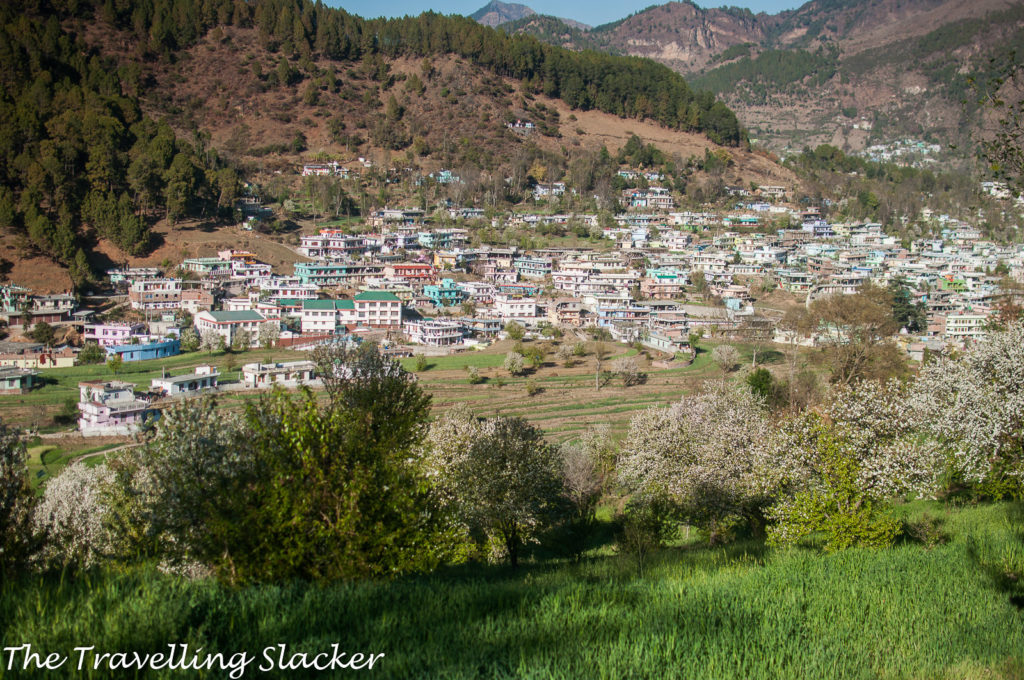 I half expected to cross this fertile stretch, climb up the hill, and arrive on the other side of the town. Nevertheless, the immediate focus was the fields themselves. Last year, I had better photographs at a similar stretch in Sidhpur, near Dharamshala, which was also an unexpected delight. This time the photographs were not as satisfactory, because I needed a hailstorm to add dramatic hues on the horizon. Nevertheless, I was personally satisfied with what I was seeing and this is something I can rarely say about any place. Also, my original instincts turned out to be true. I hiked through those fertile slopes, crossed a few houses and narrow alleys and finally emerged at the busy marketplace near Gandhi Chowk at the end, which was actually not far from my hotel. I left the district the next day but I think I need to return for some more serious treks.

How to reach Pithoragarh?

There is an airport called Naini Saini which is around 5-6 KMs from Pithoragarh Town. It was not functional until recently but recently commercial operations have started. It is a small one, as you can expect in hilly terrains. So, only small-sized aircraft can land here. As of now, there are flights from,

Where to Stay in Pithoragarh?

Pithoragarh has scores of hotels. Most budget hotels can be seen around the bus stand. Fancier hotels, including the KMVN one is also available. There is no dearth of restaurants too and I generally found the food to be good in the town.

What to do in Pithoragarh?

Pithoragarh is the base to reach far off places like Munsiyari, Gangolihat, Dharchula, Jauljibi, etc. and treks like Milam Glacier and Panchachuli. The Kailash Mansarovar Yatra route also passes through here. Within the town itself, visit the Gorkha Fort, and some ancient temples like Kapileshwar Mahadev, Mostamanu Temple, and Kamakhya Devi Temple etc. and also take a hike along the open pastures of the valley around the town, instead of confining yourself to the market. You will probably not see the peaks from the town but if you come out and walk a Kilometre or so along the road, the peaks of Nanda Devi and Panchachuli will become visible.

15 thoughts on “Pithoragarh: The Rite of Spring”