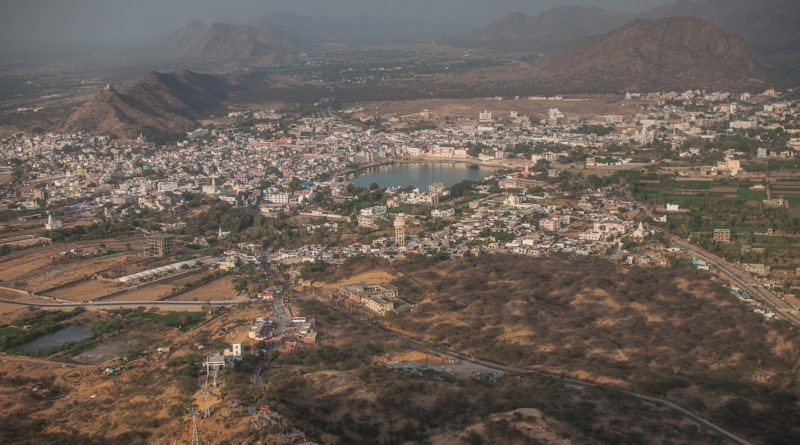 Heritage Rajasthan Western India
2019/07/132019/07/13 Jitaditya Narzary 2 Comments Budha Pushkar, Old Pushkar, Pushkar Ropeway, Savitri Temple, Varaha Temple
When I visited Pushkar last time, it was the time of the Pushkar Mela, the famous Camel & Cattle Fair. It was so crowded that I could barely see anything else apart from the people and the camels although they did offer some good portraits. This time, I was there in February for a few days and I ended up doing a few things I did not do on the previous occasion.
So, the winter was fading and Rajasthan was already heating up. I reached at noon and I had to roam around looking for a place appealing enough to stay. I could not even locate the place where I stayed last time and another one I had in my mind seemed to be full already. After an hour of meandering, I suddenly spotted one named after an iconic rock band. The sheer name of it made my decision easier but later on, I realised that they also have a rooftop face with good views of the city. So it was perfect at a minimal rate of INR 400.

This is something I am not even sure about. Why am I talking about this? Because it was near the guest house and so I happened to see it. In fact, I saw someone peeking through the partially ajar door of the temple, and on a closer look, it turned out to be a very amusing statue. Not sure what it even represents, he is more like the sentinel of the temple but looks too cheerful even for that role. The map shows it as the Varaha Temple and the same is written at the entrance, but I did not see any Varaha sculpture or statue. However, the sanctum sanctorum was locked and no one was there, so I can’t be sure. It is also visible from the rooftop cafe of my guest house. From what I gathered, the original temple might have been destroyed during iconoclastic raids fo Aurangzeb and was rebuilt later under the patronage of local kings.

Anyway, the second day I wanted to literally go the extra mile and see something else. After some reasearch, I decided to visit what they call the Boodha Pushkar / Budha Pushkar (Old Pushkar). It is around 4 KMs away from the Pushkar town. I coudl not figure out where to look for buses and so ended up walking the whole way, following the map. The road was mostly empty, except a few cows and the local band of brothers.

Eventually I reached the Budha Pushkar, which turned out to be a nearly dry pond. I was there at the fag end of winter, months after the last bout of rain. So, I was not expecting much but this makes one wonder about the origin of these places. There seemed to be no other vistor present at that point of time.

I could not find much information but considering the name, this must have been the original site for much of what is at Pushkar today. Environmental changes, especially changing of river courses might have deprived it of its regular water flow. Anyway, it is still an important site for locals and pavilions have been built surrounding the pond and there is a temple too. Nevertheless, I spotted many water birds, and also a few peacocks here, mostly because it is desolated and peaceful compared to the actual Pushkar.

My last act during this trip was to try the newly opened ropeway up to the Savitri Temple. It is located atop one of the hillocks beyond the Pushkar town. Just like the previous two, this temple also gave me a lot of confusions. Apparently, it is dedicated to the wife of Lord Brahma & considering Pushkar’s Brahma connection, I was not surprised by the same. However, Brahma’s wife is generally known to be Saraswati. So, who is Savitri? The only option is the assume the both to be the same.

Anyway, the primary allure of this temple is its location. From the hilltop, you get a panoramic view of Pushkar and earlier the only option was to hike up the hill. However, this new ropeway was opened a couple of years ago (I think it wasn’t there when I visited the first time). You need to buy tickets (forgot the price) and you can go and come back on the same ticket. I walked a couple of KMs beyond the town to reach the foothill, where the ticket counter is located.

The temple itself is a live temple, already too crowded with people. It was also dark inside and even if there was, I could not spot any archaeological delights. Nevertheless, the view was worth it. It somewhat reminded  me of the view of Shravanabelagola Town from the top, although from a much higher altitude. While I coming back, I ditched the ropeway and took the stairs for better photographs.

So, this ends my second visit to Pushkar. This time I visited mainly to relax. I tried to visit these additional temples which are not always talked about, but mostly I relaxed and walked around the town doing nothing, and occasionally consumed Israeli food (Yes, they are there too!). I think it remains one of the few places in the plains that I can even think of visiting to do nothing.