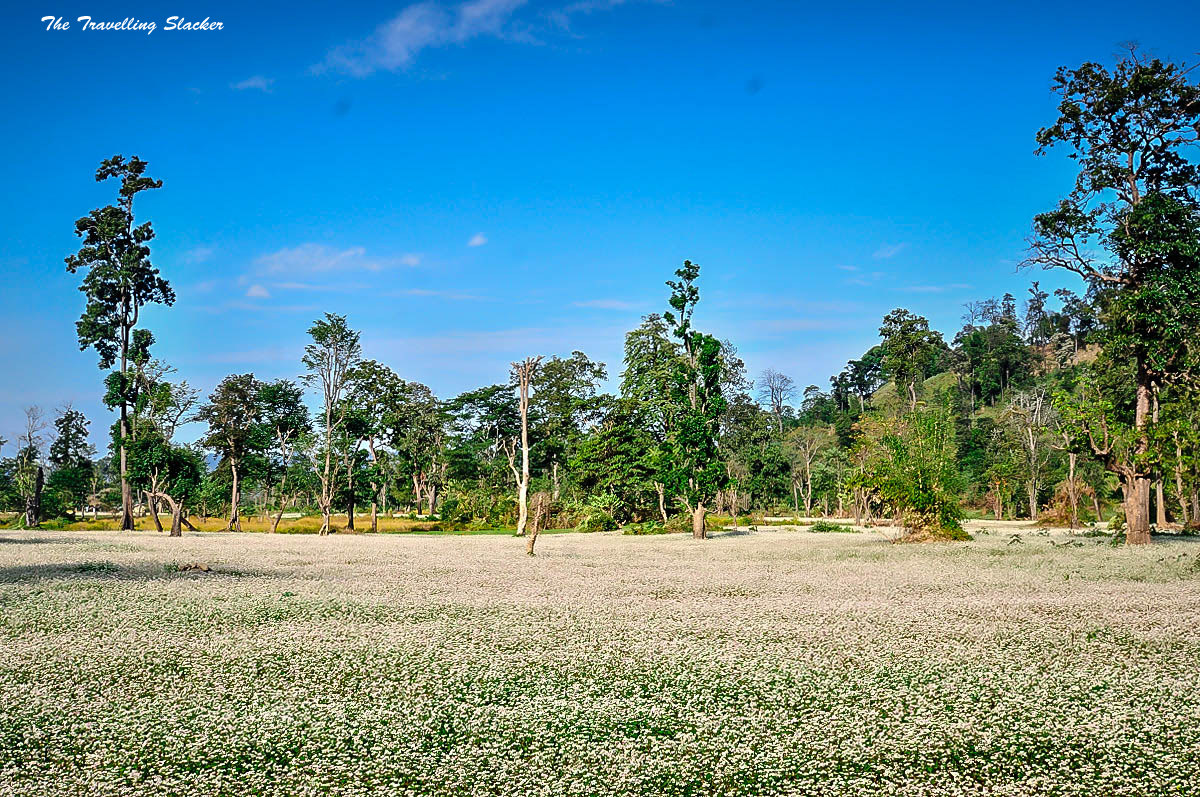 Us: But December is not supposed to be cloudy and rainy…
Namdapha: That’s why they call me a rainforest…

Namdapha is something that had been on my bucket list for a long time. The term “rainforest” has always fascinated me. But since my poverty prevents me from visiting those in the Amazon or Borneo, I decided to visit the closest domestic alternative. But it wasn’t as easy as it seemed from the map. For once, it was not a solo trip and I had done enough research to make the trip hassle free. But still, circumstances turned it into a series of escapades where three people were forced to ration every penny and opt for “dieting”. Red tape, winter rains, information gap, non-existent roads, abundant flora and sparse fauna sum up a trip that was not exactly what I expected. But nevertheless, it was one of a kind.

Reaching Namdapha: A not so good beginning

The original plan consisted of four people. Brent was supposed to join us from the US. But very soon he got the real taste of Indian bureaucracy. He was told that there has to be at least two foreigners together to get the permit for Arunachal (For the uninitiated, both Indians and Foreigners need certain permits to enter the state of Arunachal Pradesh). So he was flatly denied the pass for no practical reason and hence we arranged for him to visit Kaziranga in Assam. The three of us, all natives of Assam, got our Inner Line Permits from Guwahati and decided to move on.

We’d initially booked train tickets to Tinsukia. But on the night of the journey we realized that the train is running late by more than 8 hours. We tried to get into a different passenger train but were kicked out by the unruly crowd already occupying every square inch of those coaches. Eventually we gave up on the train and decided to take a night bus by spending some more money. We finally reached Tinsukia next morning at around 8 am.

Tinsukia is a busy provincial business hub. We were not quite sure how to proceed from here. The buses were full and so we finally hired a car for INR 2000 to reach Miao, a small border town in Arunachal. The car passed through towns such as Digboi, Margherita and Ledo, centres of Oil and Coal production. We had a stopover at an ethnic Singpho restaurant where some people devoured momos and roasted pork while I had to be content with a plate of demure chowmein.

The road was smooth and pleasant, lined with numerous tea estates on both sides. But this lasts only till a place called Jagun, which is the last town on the side of Assam. You can also reach this point easily on a bus. If you want to visit the famous Stillwell Road, this is supposed to be the point but we never had time for that detour. Anyways the road conditions changed drastically once we entered Arunachal. It took forever to cover that 40 km stretch to Miao in the Changlang District and I began to develop a mild back pain.

Miao is a small town just at the edge of Namdapha National Park buffer area. You need to get your papers checked at the Forest Office here and in case you had booked rooms at the forest rest house, you need to get confirmatory paperwork for that too. If the road to Miao was bad, the road onward was non-existent. Either you need a highly capable vehicle along with a very good driver or hire a local driver on this road. We had to hire a local one, a pickup van where only one could sit alongside the driver and the remaining two had to stand behind like cattle completely exposed to the chilly winds of December. It took at least three hours as we crossed dried up streams, small settlements, paddy fields, slippery puddles, exactly in that order. It was already dark by the time we made it to the Forest Rest House at Deban, located in the midst of the jungle and by the side of the Noa Dihing river. There is a small village too on the other side of the river but we’ll come to that later on.

Day 2: Into the Jungle

The food cooked by the caretaker Mr Gopal Chhetri was good. So we had a good night’s sleep and woke up late. Our guide was a local guy (unfortunately I din’t get his name properly) who seemed to have a keen interest on birds himself. We initially walked by the side of the river bed, crossed a couple of bamboo and lumber bridges and eventually reached the jungle trail.
The evergreen jungle was so thick that it was almost dark at places. We heard various sounds, that of birds and probably primates but could not really locate anything. Nevertheless, the jungle was ancient and venerable. The weather was also gloomy and then it began to rain too. However, the canopy cover was so thick that it saved us from getting wet. We kept walking and walking through an immensely diverse collection of trees and plants. We noticed strange fruits, bamboo arcs and a tree piggy backing on another.

We finally reached the camp called Hornbill Point although there was no hornbill to be seen there. There is a small shed where forest guards, workers and tourists can halt and can apparently see birds and hoolock gibbons when weather is not playing spoilsport. The trail also goes up further and as we were informed, we could have got some more exciting views. But those interiors were mostly closed for some tiger survey (Yes… it’s a Tiger Project too).We came back after having our packed food at the Hornbill Point and it was the proverbial “blue hour” by the time we reached back the river bed. That is exactly when we got some of the less embarrassing photographs.

By that we were out of money and there was no way of withdrawing cash either. So we had a limited meal and hoped the eventual bill not to go beyond our estimations (eventually we just managed with some kindly discount by Mr. Chhetri).

As the previous day’s trip was not too satisfactory, we decided to visit the nearby Chakma village (correct me if I’m wrong) before leaving. We only had a couple of hours but as always, the weather looked perfectly fine that day unlike the previous day as I was not in a position to take advantage of it. The white sorghum fields were an interesting sight at least for me having never seen one before.

We had arranged the same pickup van to drop us back at Miao. He arrived a bit late and made us share it with around 15 local passengers. It was a tiresome ride but eventually we reached back safely.

The nearest airport to Namdapha is Dibrugarh and the nearest major railhead is Tinsukia. There are multiple routes possible but the one we followed was Guwahati-Tinsukia-Margherita-Ledo-jagun-Miao-Deban. You may notice some Buddhist monasteries en route.

The highway takes you till Jagun. It is smooth and pleasant with good views all around. The road from Jagun to Miao is horrible and from there to Deban is practically not even a road but a jungle trail.

You can easily reach Tinsukia or Dibrugarh by bus or train. Then you will find cars fro hire near the respective stations. For Tinsukia to Jagun they charged INR 2500 to us and eventually came down to INR 2000. The locald river from Miao to Deban asked for INR 1700 and came down to INR 1400 (One way). While returning we saved money by taking a shared Tata Magic to Jagun and then bus to Tinsukia for a minimal amount.

Indians need the inner line permit (ILP) while the foreigners need the protected area permit (PAP). There must be at least two foreigners together for the permit. Its easier for the Indians. You need two passport photographs, a copy of your ID proof and pay a small fee of INR 25 for the same at the respective office in Delhi, Guwahati or Dibrugarh.

You can send a mail to [email protected]
Sounds strange? Yes, even I wasn’t sure. Government officials in India are notoriously non tech-savvy. But it does work. The person handling the mails is a certain Mr. Das at the Miao office. He is a nice person and very helpful. Make sure you provide all the details such as names of the visitors, dates and contact details in the mail so as to make the process quick. Once you reach Miao you have to visit the Forest office and produce your permits (Take a photo copy of the same).

Now this is tricky. The last ATM is probably at Margherita or Ledo (Not sure about this). So you need to take enough money with you. There is a State Bank of India branch at Miao and in case you have an SBI account you may get something out there. So withdraw your money even before you enter Arunachal without taking any chance. Here are the potential expenses you need to keep in mind,
• Transport: As mentioned already, local transport is expensive. Set aside a few thousand.
• Accomodation: The Forest Rest House is a nice building which is amazingly cheap. We paid INR 250 for a room in the bungalow shown above and it was shared by three of us.
• Entry: This was the worst jolt that affected our calculations. After Miao you need to pass a gate where they charge certain amount of entry fees per head. But the problem was that they were charging INR 500 per day per camera for SLRs. This, we felt was exorbitant and some we had not kept in mind. We had to pay INR 2000 only to take our two DSLRs and this is the reason why we had to ration our food for the rest of the trip.
• Food: The food cooked by the caretaker is good and he charges basic amount. You should not be spending more than INR 200 per head per day on food.
• Guide: The guide charges INR 500 per day. Apart from that you need to pay some small amount every time you cross the river and enter the jungle.

What to Expect at Namdapha:

It is a bio diversity hotspot and also a part of Project Tiger. Yet, it is not easy to spot animals here. The thick forest hides most of them and sighting large mammals is almost impossible. If you are lucky and the weather is good you may see some birds, monkeys and gibbons. Besides, general tourists are only allowed in the buffer zone and the very few people can reach the core area. Go there for the jungle, solitude and serenity. Any large animal sighting would be a bonus.