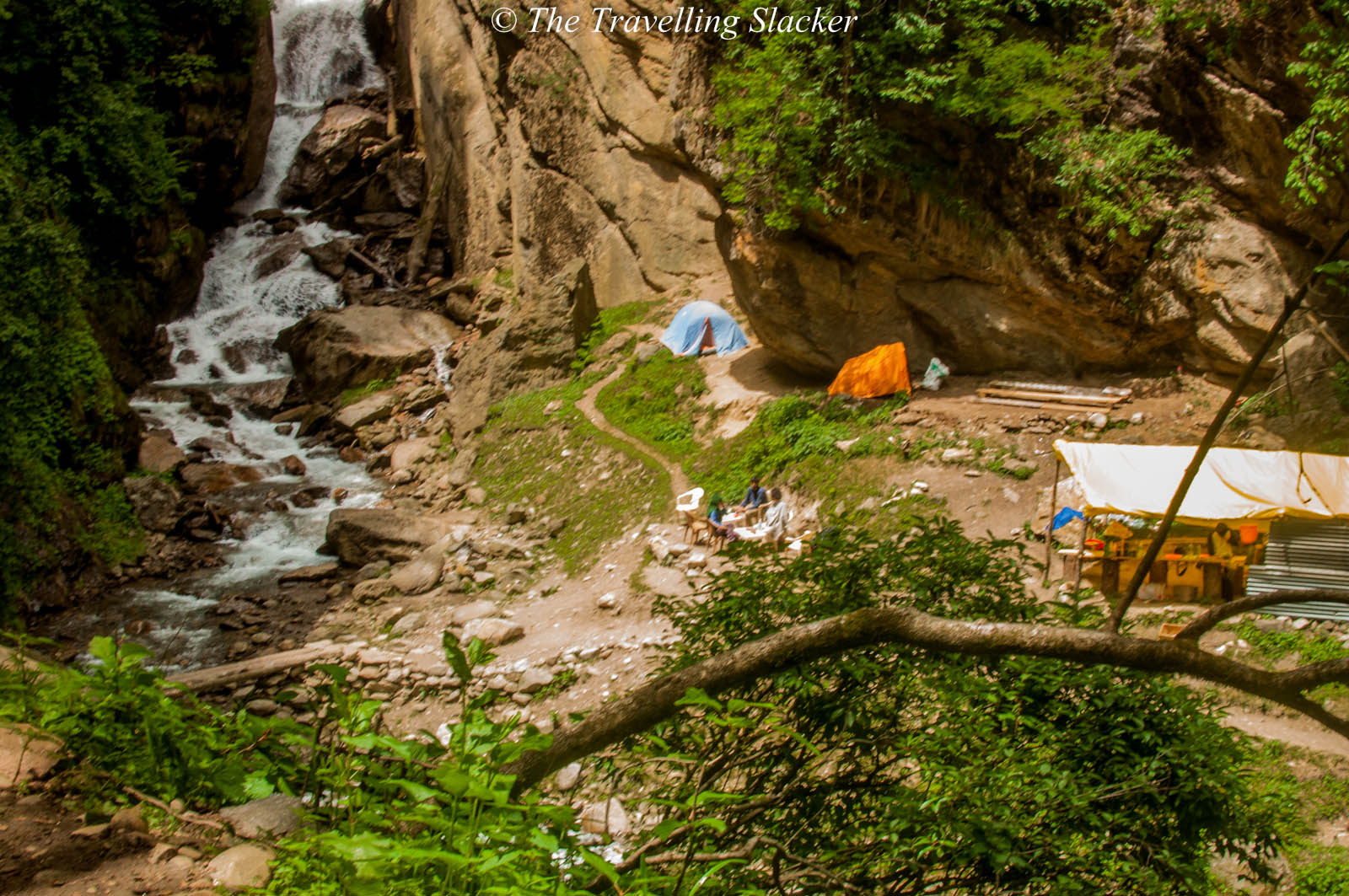 Kheerganga is a trek that has become too popular of late, mainly due to the popularity of Kasol as a hippie joint. It receives a regular flow of trekkers, as a fraction of the party crowd in Kasol gathers enough motivation to try this one out. I spent some quality time in the Parvati Valley last year but did not try Kheerganga. So, this time I wanted to finish it off. Since it is a pretty popular place, I doubt I have anything new to say. But nevertheless, I managed to make it slightly more interesting by taking the wrong route at the start. 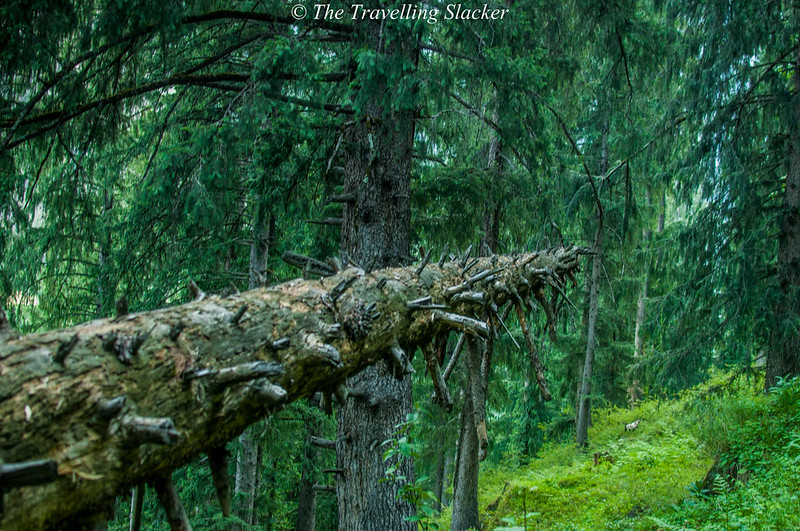 We made an early start just after 6 am from Kalga, a place that I’ve described before. (There is another route that bypasses Kalga in case you want to start immediately upon reaching Barsheini). We were too confident and did not ask anyone about the route. There was no one else around that morning, which was surprising for such a popular route. But we consoled ourselves by believing that we are the more hardworking ones who managed to wake up so early.

However, confusion began to grow as even after 2 hours, every sign of a clear trail was lost. Then we met some locals tending to their cows and realized that we have come the wrong way. But the return was even worse as we even lost the faint trail that we took. We were hearing the sound of the river and so kept walking downhill through dense forest, and had to use both our hands along with the legs to survive this stretch. Eventually we did come out of the jungle, and emerged just at the right point, where the real trek starts from the village. It was already 11 am and we were starting afresh.

Anyway, by that time we’d vowed to complete the trek by the end of the day or die trying. We moved ahead with our tired legs but thankfully the real trek did not feel that hectic. There were many even stretches where we just had to walk along a straight line.

The initial stretches are regularly marked with advertisements for something called The Waterfall Cafe. It is approximately the midpoint of the route and the final 500 metres to this point was much steeper. Considering the escapades in the morning, we’d already do e several hours of trekking and gladly accepted the not so inviting and overpriced food at the café, which was basically a temporary shack set under a waterfall. I washed my face and filled my feet in water, only to withdraw after half a minute. The water was ear, clean, and freezing.
The next half was comparatively steeper and the jungle got a bit denser. But eventually it was not as hard as I expected. It took around four hours to complete it, which was not bad as we’d wasted a lot of energy in the wrong place earlier in the morning. 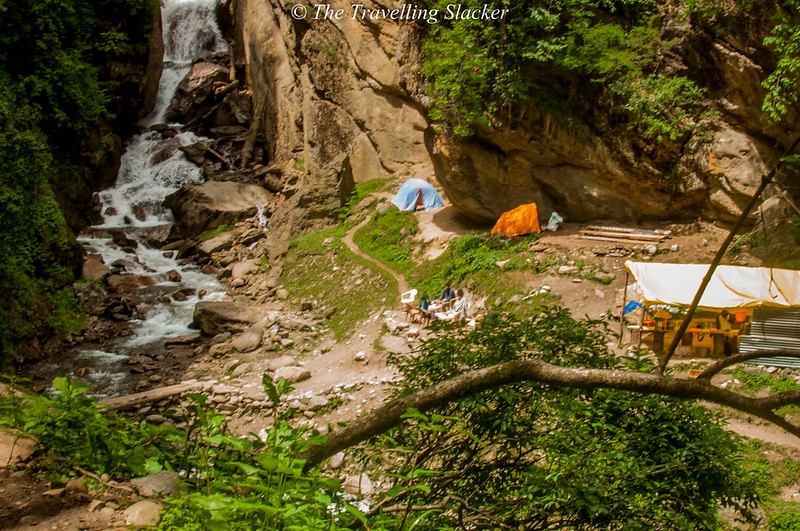 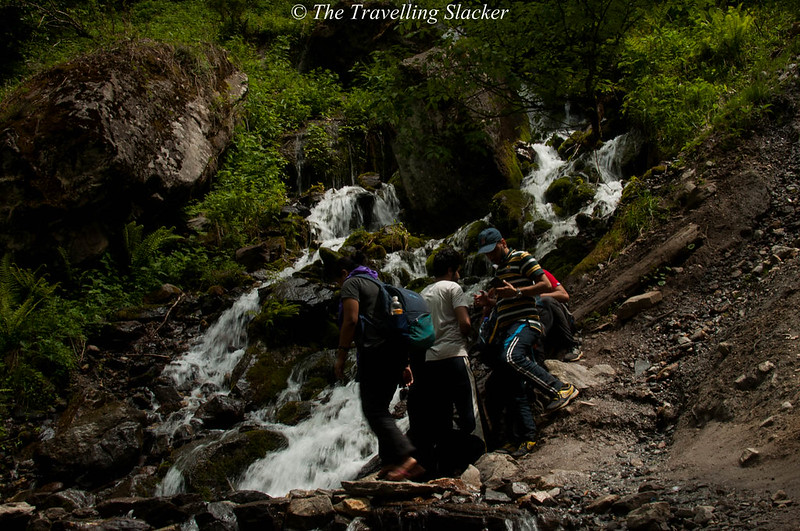 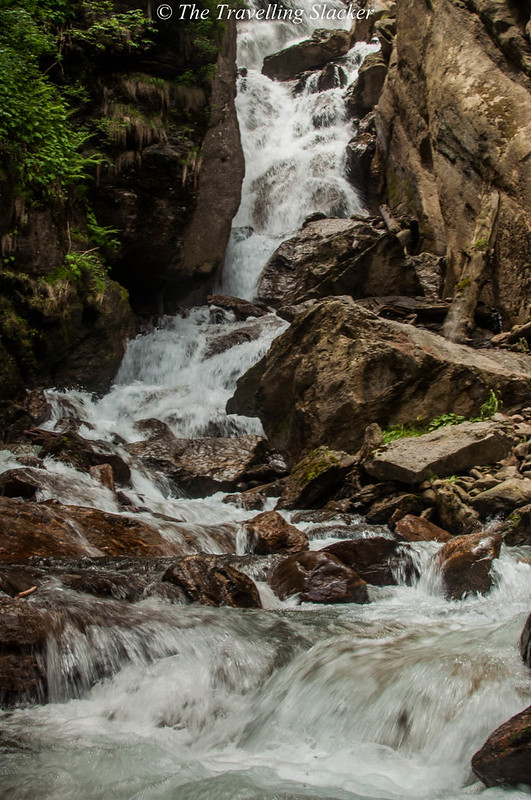 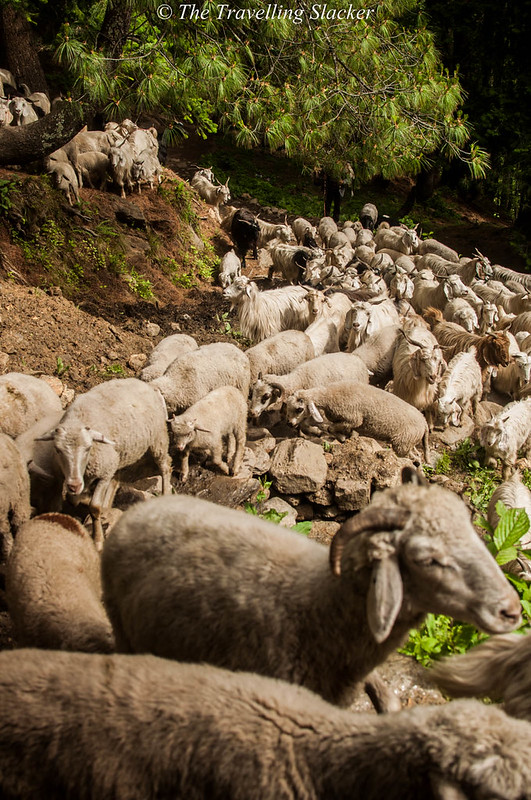 The Kheerganga top was somewhat underwhelming in terms of the views and overcrowded compared to something as basic as Triund. The views were decent but the exotic name had made expect much more. Anyway, we were tired and we started looking for accommodation for the night. There were basically three different options being provided. Tents, private rooms in apparently temporary wooden huts and large dormitories with dozens of mattresses spread on the floor. The last option was the cheapest with 100-200 per bed depending on the provider. However, they looked like Chinese opium dens and did not look very secure. 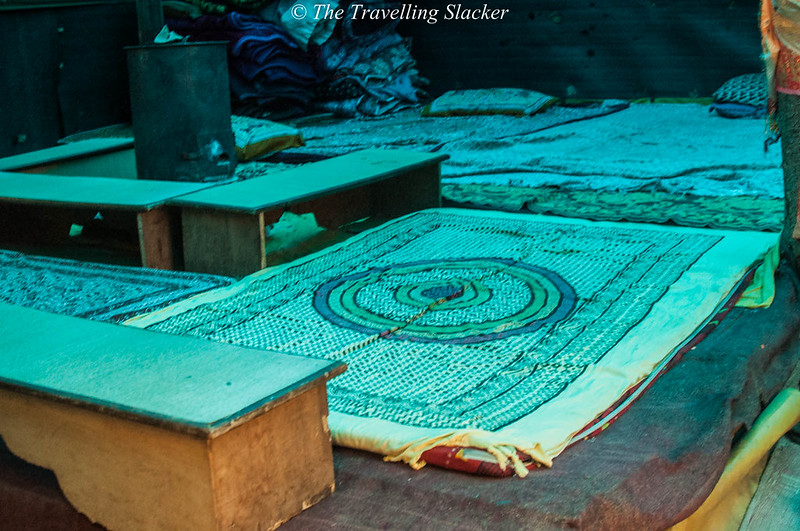 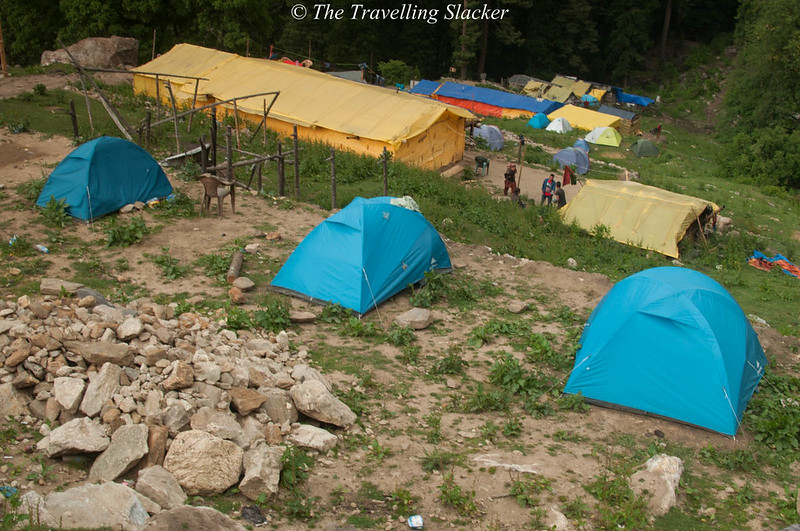 Eventually we settled down for one of the private rooms with a large double bed shared with two more people. So we were four people in the room that cost 600 for the night. Most of these accommodations also served as restaurants and the menus claimed to provided almost everything under the sun but less said about their quality is better. I understand that in such makeshift facilities it is not possible to do much but due to excessive commercialization they still end up making very tall claims. 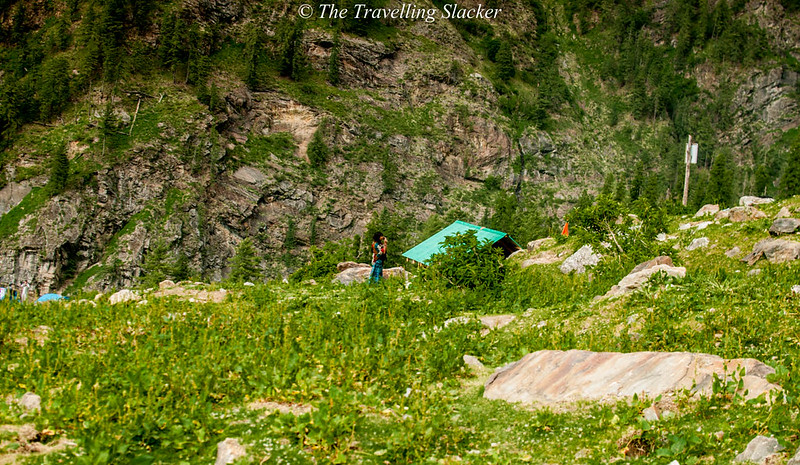 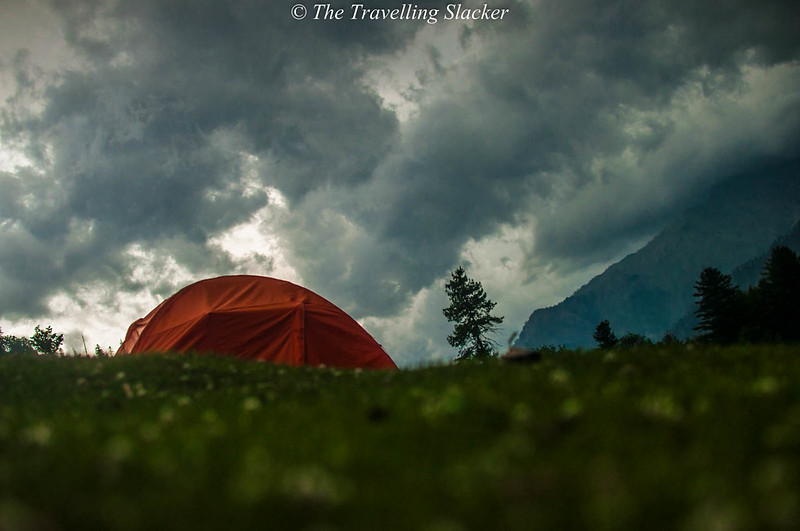 As most people must be knowing already, the key attraction of Kheerganga is the hotwater spring. As a result, it also remains occupied almost all the time. Your best chance is to try it out very early in the morning before anyone else wakes up. 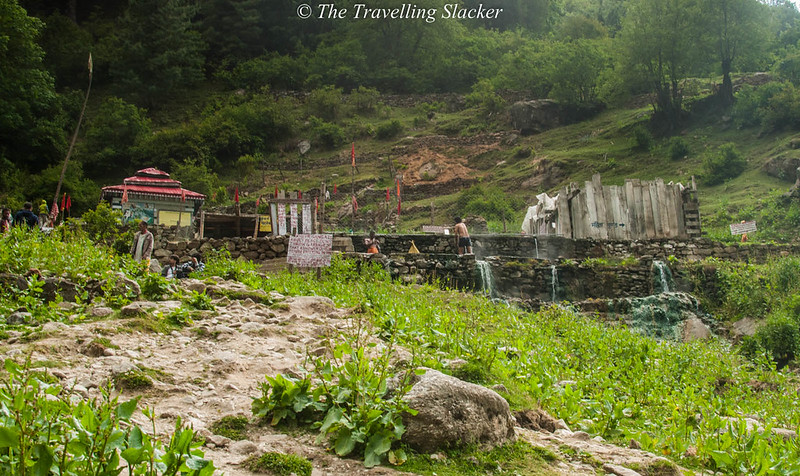 For a while we consider making further trek to Tunda Bhuj, a next point much higher up, which promised better views ad a respite from the crowd here. However, it actually lies on the very long and challenging Pin Parvati Pass route. So, I gave up on the idea and decided to come back for the complete trek some other time. 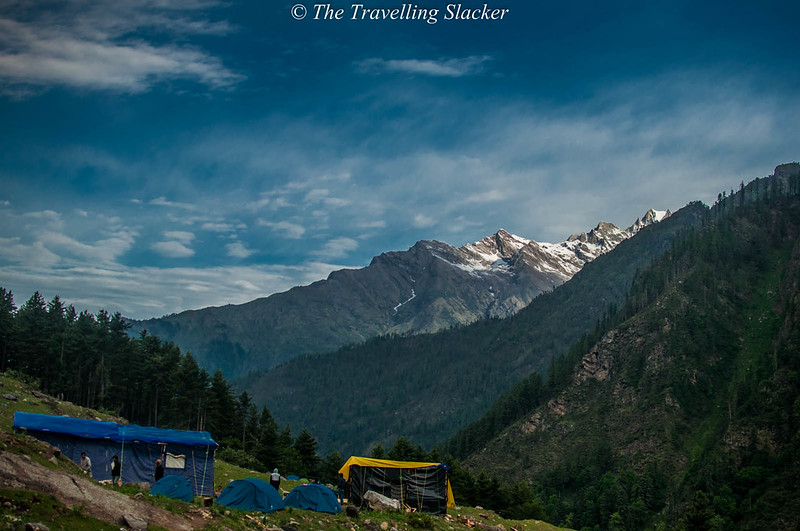 The return was quick and mostly eventless except one moment when I spotted the following animal. I am not sure what it was. Someone else thought it was a flying squirrel but I could not spot the wings. It was on the ground, probably injured, and so it could not run away. It probably needed care but I had no skills or expertise for the same. So, I moved on, hoping someone else does. I did not feel very good about myself. A disappointing way to wind up a disappointing trek! 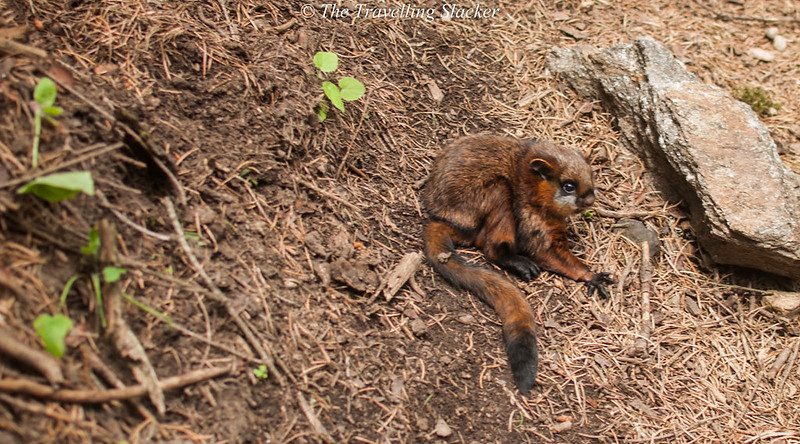 This is a short guide to reach Kheerganga updated post the ban.

How to Reach Kheerganga?

As you probably know already, for Kheerganga, you need to reach Barsheini, the last roadhead in Parvati Valley, where the buses would go from Bhunter via Kasol and Manikaran. A 10 mins hike from here takes you to Kalga village, famous for its INR 150-200 stays where you can also stay. After that, you have three options,

This is the direct route from Kalga village that I took. It should not take more than 3-4 hours through this route to reach the Kheerganga top and most people take this one. At the midpoint, there is a waterfall here, with a shack called… well… waterfall cafe!

This is an alternate route that starts from Barsheni and goes through a villages called Nakthan and Rudranaag. But eventually this route also meets the other route somewhere after the midpoint and the final stretch of it is the sameas the previous one.

There is a tougher alternative route through the Bunbuni Pass from Kalga. It is steeper, and less crowded. So, if you are a serious trekker and find that route too easy, try this one. Read this post on the Bunbuni Pass here written by a friend.

Where to Stay in Kheerganag?

This is the interesting part. When I visited a few years ago, the Kheerganga Top was full of unauthorized huts. Some of them offered dorm beds at INR 100 apiece while some offered “private rooms” at INR 300-500. The in 2018 there was a ban on these settlements to prevent overcrowing and pollution and so the trekkers had to arrange tents for themselves. I even wrote a post on Kheerganga Ban last year. However, I have learnt that some of them have come back this year. Not sure if there is a reversal of order or simple offoical leniency. But anyway, ask around in Kasol before you leave.

Don’t expect too much. There used to be open makeshift toilets set up by the same accomodation providers when I visited. That is what everyone used. Not sure if they still exist.

I even noticed shops selling all sort of packed items. Those who provide accommodation also provided food. However, naturally they are very expensive at the top as the supplies need to be carried through the trek from below. You can carry light stuff with you to save costs.

The most popular season for Kheerganga is Spring, Summer, and Post Monsoon.

Spring (March-April) It is a beautiful season in Parvati Valley. In the lower areas you will get nice weather and spring blossoms. At the top, there should still be some snow left from the winer.

Summer (May-June) It is still a good season. But this is also the season when it receives maximum crowd.

Monsoon (July-August) Rainy season is generally avoided because with too much rain it gets slippery and you can’t also enjoy much.

Winter (Nov-Feb) In the winters also you can do it. But in November the greenery fades a bit and once it starts snowing, it gets cold and challenging.

Yes, it is possible to do this trek in the winter. However, do note that once it snows, trekking becomes much more difficult. You can still do it but if you are not experienced, consider taking a local guide, and also enough supplies and protection from the cold. If you just want to see snow, I may suggest trekking in March because the severe winter is over by then but the snow should remain at the top.

Kheerganga gets its name from the natural hot water spring at the top. This is the main attraction and this is where everyone takes bath.

Yes, the bath is now gender segregated. The women’s section is seperate, and covered with walls.

PS1: People mostly club Kheerganga with other popular nearby areas like Tosh, the route to which also goes from Barsheni. Here is a Budget Guide for Kasol, Tosh, Malana.

PS2: For a more comprehensive post on the valley, read my Parvati Valley Travel Guide.