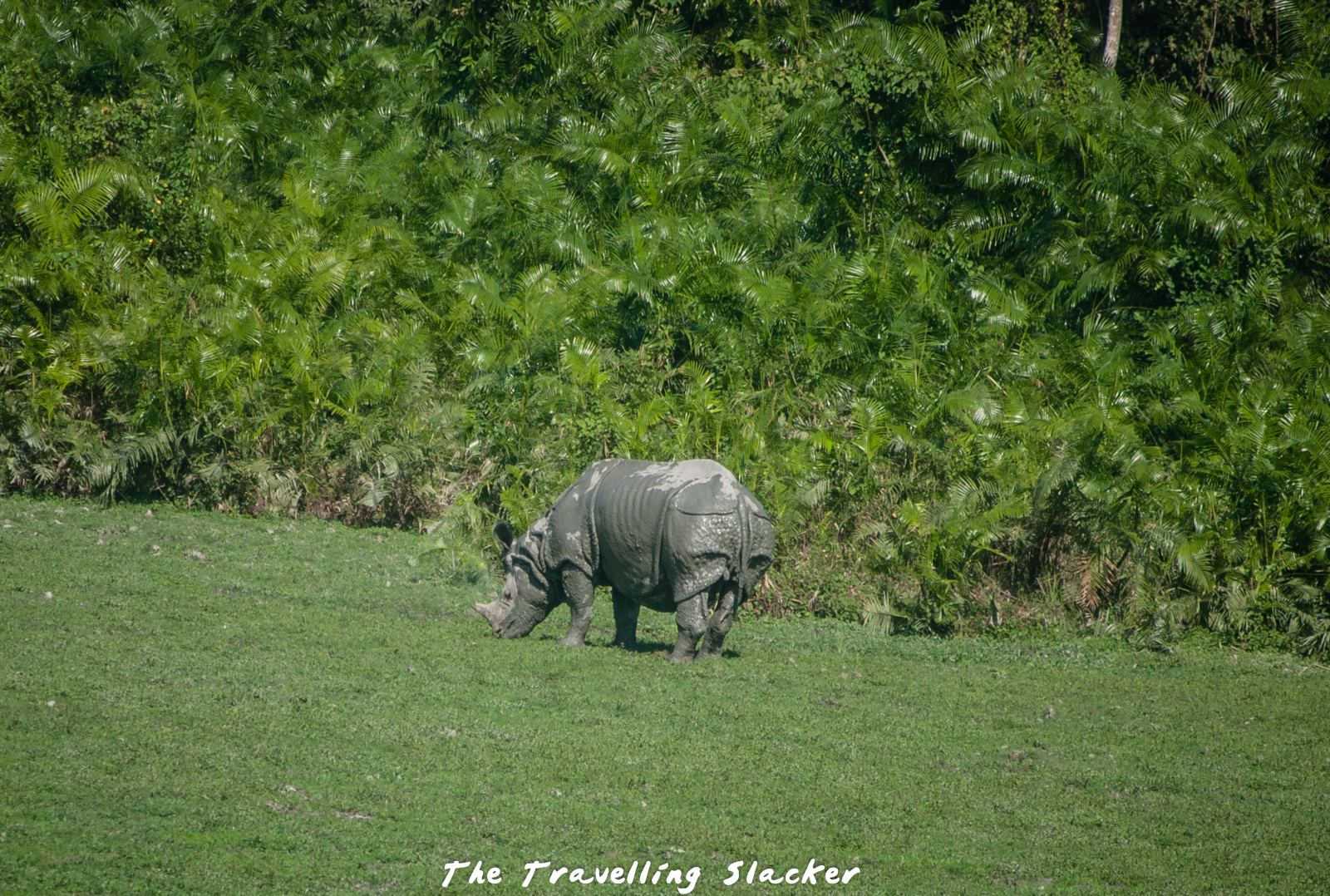 Well, to put it bluntly Kaziranga was mostly an underwhelming experience for me. So much so that I do not feel like writing long details about it. In short, I saw more trucks along the road and more Bengali joint families in the hotel than any kind of wildlife inside the park. This is by no means a rant against Bengali travellers but an appreciation of their persistent wanderlust that most other Indian cultures generally lack. Nevertheless, the feeling of being surrounded by human beings and automobiles rather than wildlife in a national park, that too an UNESCO World Heritage Site, is not a very uplifting one.

I know the above line came out to be bleaker that I’d intended it to be. But disappointed I was. Nevertheless, people who are not from Assam will still enjoy the experience, due to the sheer topographical characteristics of the region. Also, the choice of timing was probably not optimum for me.

It was a family trip after ages and we just drove through the NH37 passing through paddy fields and tea gardens. These are generic sights here but those who are not familiar with the terrain would find them delightful. We reached the main entry point at Kohora at around 2 pm. We had not booked anything in advance and every hotel seemed to be full. It was the first day of the season (it remains closed during the rains) but a huge number of people seemed to have been waiting for this day with bated breath. We finally managed a room after a lot of struggle and went of to visit the new Orchid garden. However it is a different story altogether and I will describe it later in a different post.

The next morning we started the jeep safari. The other option was the elephant safari which promised to go closer to the animals but was shorter in duration. The jeep initially picked us up from the hotel and reached the main entry point called Mihimukh Gate. The landscape gradually changed after that. The vast pastures populated with cattle gradually gave way to thick bushes of tall grass and scattered water bodies. However, there were several other jeeps both leading and trailing ours. So, the feeling of wilderness was not really overwhelming.

The driver tried to compensate the lack of sightings with his own stories of tiger sightings. We saw some birds flying away and a few colourful and reasonably big butterflies that never settled down to be photographed. Finally, after a while, the driver pointed us towards the bushes with excitement. There were a few wild buffaloes, distinguishable from the domestic ones due to their XXXL sized horns. One of them looked directly into us, with a mixed feeling of annoyance and inquisitiveness and also with a sense of authority that a domestic one would never have. It seemed to be a good beginning however it remained our closest view of any big mammal.

After a while we reached Marsh full of birds, mostly adjutant storks and spoonbills looking for breakfast. But more delightfully, we also noticed a colony of pelicans at a distance. However, the problem was that they were located at quite a distance and they deliberately kept away from the jeep trail. Also, we were not allowed to get down from the jeep. So, I had nothing much to do apart from cursing my insufficient zoom and taking some highly disappointing photographs.

The driver took a left turn and reached a tall watchtower. There were many tourists already swarming it. All of them seemed excited and pointing at something or the other. However, I could not see much and was not sure if it was the “emperor’s new cloths” phenomenon on their part or myopia on mine. Furthermore, we learnt that we cannot proceed any further. So, the return journey began. We noticed some more birds and then the jeep stopped in front of another watch tower which we bad bypassed earlier. This time, I saw a few deer and finally there was a rhino too, but at such a distance that I felt it really hated humans. Tigers are elusive anyways and I was not expecting them. However, such aloofness of the rhinos was disappointing. I think they are beginning to generalize the acts of a few poachers. Next time I will wear a T Shirt reading “I am a human being and I am not a poacher.”

We saw our pelicans and storks again while returning and also caught sight of a few hog deer, grazing not very far from the jeep trek. But the better view was that of a trained elephant that greeted the visitors with its trunk.

We returned to the hotel and checked out with the confusing feeling of having seen Twilight after booking tickets for LOTR. However, as we were returning, we saw a bunch of people standing on the side of the road near Bagori Range. We stopped the car and joined the bandwagon. Yes, there it was! The elusive one horned rhinoceros, so unmindful of the onlookers and of its own safety! The timing about perfect too. It was grazing at a place where the afternoon sun made it perfectly visible. Although I have been closer to rhinos at Pobitora, this time the light was better it was just striking the right pose.

Check the Kaziranga DIY travel guide if you are planning a visit.