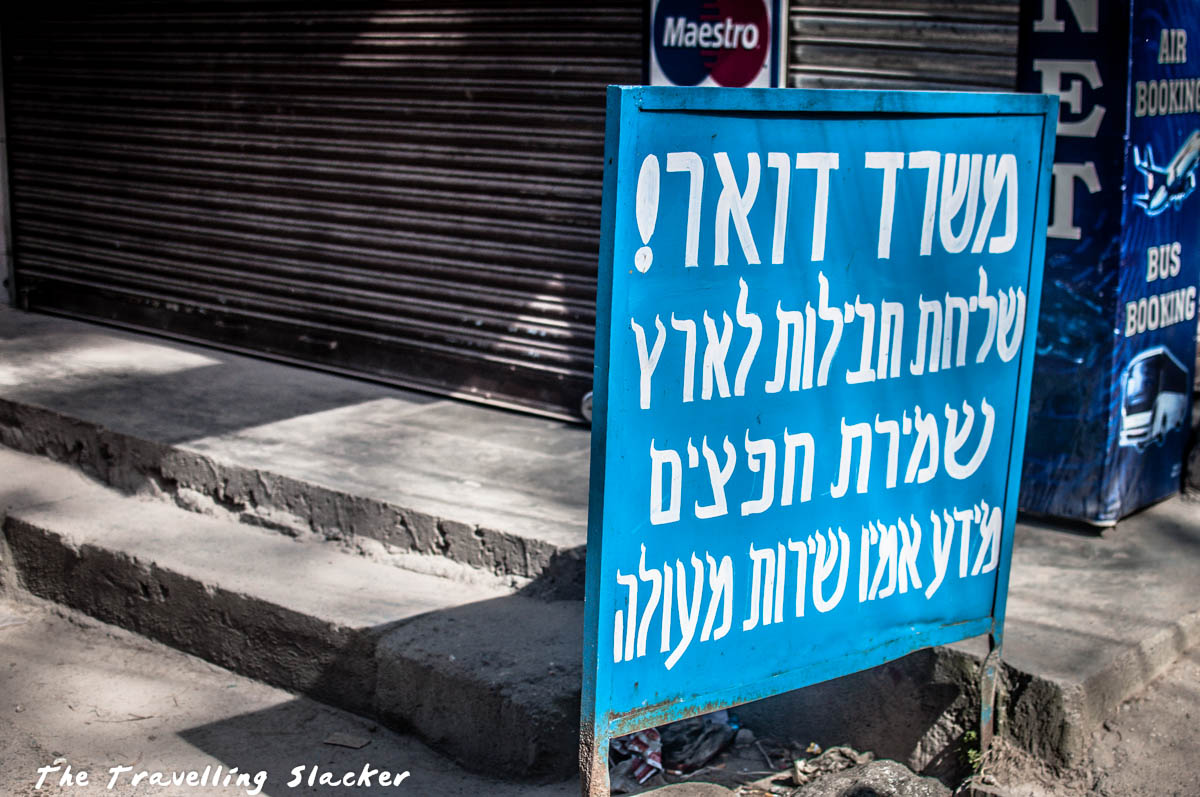 Among all the things I heard about Parvati Valley before actually arriving there was the predominance of the Israelis. I am not sure if all cool places in India invariably becomes populated by people from another nation or vice versa. Anyways, if there was any doubt in my mind, it was extinguished by the very first signboard I noticed once I got down from the bus. It was bright, bold and was in Hebrew (or so I think). As we strolls around the town, we saw more and more such signboards. Thousands of Israelis visit this region every year and stay on for months, apparently to recover from the stressful military service that is mandatory for them. But why do they choose this place in particular? Well, as you know, a certain plant grows here very well.

We came after the Malana trek and made Kasol the base for next few days. We found d a hotel with decent furnishing and good mountain view at minimal rates. I have already discussed the Chalal trek next day. I will get to other trips later but as of now let us have a look at Kasol itself. I did not really have the time to explore the interiors of the town and stayed in the more touristy main square.

Exotic menus check. Mood lighting check. Bob Marley check. Che Guevara check.
Just like other more touristy places in India, Kasol is full of uber cool restaurants that are more adept at serving English Breakfasts and there are “German Bakeries” that bake their own breads. But more interestingly, all the menus are replete with Jewish cuisine. We ventured into one of those dimly lit restaurants on our first night. The lighting was surreal and the walls were decorated with Hindu mythological characters clearly targeted at foreigners looking to grab a piece of Indian exotica.

I ordered something called bureka that night which turned out to be a glorified puff. Yes, my culinary knowledge is poor, in case you have not realized already. For the next few days too, we explored varied restaurants, all painted with counterculture icons. However, the quality was not as exotic as they sounded on paper. Nevertheless, for those who live in bigger metros in India, it is a much better place to enjoy hummus, pita and latkes without going bankrupt.

Apart from the restaurants, the markets did not offer much. Mostly there were shops selling cheap disposable clothing with clichéd Indian symbols. But if there was one thing that stood out I. The crowd and distinguished this town from the rest, it was the chillum. Almost every shop had variety of chillums and assorted equipment. At this poi t if you are wondering why then you must have missed my previous posts here and here. Anyways, that was all about Kasol. I will be back with the Rashold trek in a day or two.

10 thoughts on “Kasol: The Promised Land”