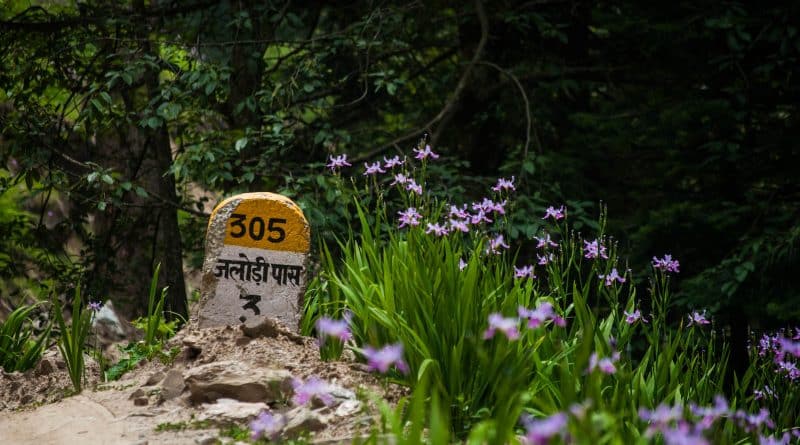 Jalori Pass or Jalori Jot hardly needs any introduction for the Himachal regulars and I already have several posts on various activities in this area. However, I think I never made a post dedicated solely to Jalori. So, here is a small guide to tell you all you need to know about the pass that is a destination in itself.

What & Where exactly is Jalori Pass? 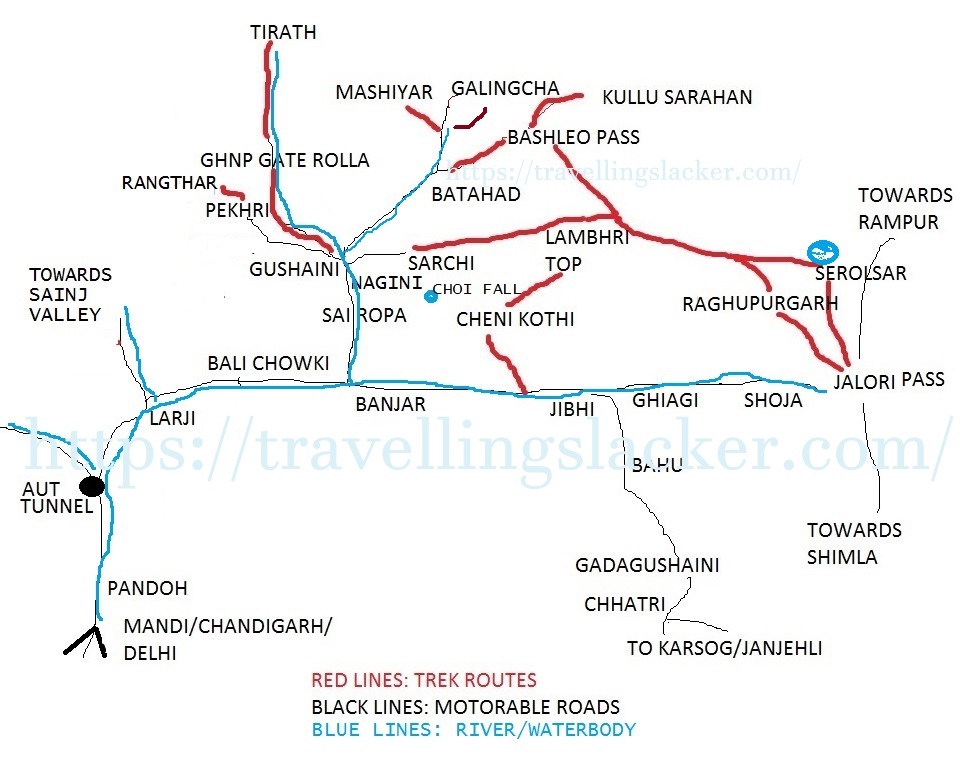 Jalori Pass is a low altitude pass at an altitude of 10800 feet (3291 meters) that connects Kullu and Shimla districts of Himachal. It is a motorable pass which forms the National Highway No. 305, which is a smaller branch connecting NH 3 & Nh 5 between Aut Tunnel and Sainj (Don’t confuse with Sainj Valley). It passes mostly through the Seraj region and touches parts of the Great Himalayan National Park (GHNP) consisting of Tirthan Valley & Sainj Valley, which is an UNSECO World Heritage Site. As of now it is a narrow road but works are going on to make it a broad, multi-lane highway, which will imporve connectivity but in that case the place will no longer be as peaceful as it is now.

Although the highway is a new developement, it is an ancient route connecting both sides. The British also used it during the colonial times, which is why it shows as the “Old Britisher’s Route” in google maps. The old route was apparently a bit higher than the current road. Many popular tourist hubs such as Jibhi, and Shoja falls on this route. In fact, from Jibhi to Jalori Passs is a delightful stretch with many small hamlets like Ghiyagi and Shoja where you can stay. From here you can go for a couple of short hikes to Raghupur Garh and Serolsar Lake while longer treks into the Tirthan Valley are also possible.

How to Reach Jalori Pass?

As per my experience, the best way to reach Jalori Pass is to take a Kullu-Manali bound bus from Delhi or Chandigarh, get down at the bus stand of Aut just after the Aut Tunnel, and get one of the buses going towards Jalori (Check Map). While long distance buses going through Jalori towards Shimla may be few, you will get dozens of buses to reach Banjar & then other buses or shared cars for Jibhi.  If you are there for multiple days, you can stay in any of these places and visit Jalori the next day. Once I even hiked from Shoja to Jalori (5 KMs) becaus ethe bus was too crowded. If you are coming from Shimla, you will have to find a bus moving in the opposite direction.

Main Towns on the Jalori Routes

Aut Tunnel is a long tunnel that you cross while going to Manali. Aut is also a small village turned roadside town just after the tunnel. It has some shops, restaurants, a few hotels & homestays on the banks of the beautiful turquose Beas river, and of course the bus stand from where you get buses to Banjar, Sainj, Tirthan, Jibhi, & Jalori. I once spent a night here and discovered what persimmons are.

Banjar is the main town in this region with a big bus stand. It is not a very pretty town but it has a big market and you can buy anything you need. Local buses for Sainj and Tirthan Valleys leave from here. Jibhi bound transport can also be found easily. It also has a few hotels.

Jibhi has suddenly grown in the last few years. From a non-descript village, it has become a hippie town popular among western backpackers. It is a beautiful roadside settlement with numerous beautiful homestays. It can be your base for Jalori visit and many other trails also leave from here. It is so popular among westerners that you can even find a Greek restaurant here!

Gadagushaini is a small detour from the route, and one of the least explored areas. Don’t confuse it with Gushaini in Tirthan. Much more needs to be done here.

Ghiagi s a few KMs ahead of Jibhi towards Jalori. It is another small roadside village that has become popular becuase of a couple of homestays. It also has a few dhabas where buses generally stop for food.

Shoja is further ahead of Ghiagi and it again has a cluster of homestays. In the summers the slopes here gets covered with purple iris blossoms.

Eventually you reach Jalori Top, which also has a few dhabas. There are a few temples here too. There are a couple of trails from here that you can take up (discussed in the next section). It also offers great views of the distant peaks on a clear day.

Khanag is a small place you reach after crossing the Jalori. It is famous for its old rest house. Penelope Chetwode, the famous explorer known for her book on Kullu, died somewhere here during her last expedition.

From Jalori Pass, two small trails go to Raghupurgarh (remnants of a small fort and nice high altitude meadows, 3 KMs), and Serolsar Lake (More of a small pond amidst jungles, 5 Kms). You can do these two treks alone. Apart from them, you can go further and reach various parts of Tirthan Valley through multi-day treks. But you will need local guides for that.

Raghupurgarh Fort was believed to have been built by Mandi rulers. To be honest, now you just have some potions of stone-walls remaining. Nevertheless, you go there not for the history but for the expansive views. It is around 3KMs hike from where your bus stops at Jalori Top. It is around 3500 meters in altitude, so you will gain an altitude of around 400 meters that should not take more than 1.5 Hrs.

Serolsar Lake is a small lake but it is culturally important for this region. There is a temple dedicated to Budhi Nagin, out there, who is a major deity here. It is around 5 KMs from Jalori but it is not a steep hike. It is mostly a straight walk into the jungles that can be covered in less than 2 hours.

Where to stay in Jalori Pass

It is a beautiful area and you can spend a day or two at any of the places en route, including Jibhi, Ghiagi, and Shoja. There are many homestays in these places at various price points. Budget travellers can also find decent options here in the INR 500 range. There is also camping facility in the meadows near Jalori Pass although I have never tried them.

What is the Best Season for Jalori Pass?

Different seasons have different delights here. The spring and  summers are the best for me when the wild flowers blooms. However, winters are also popular for those who want to see snowfall. Monsoons are generally avoided because excessive rain can make movement difficult and also cause landslides.

Snowfall naturally takes place here here in the winter between December to February. But it can snow later also. For example, once I got snowfall as late as early May, when it turned white after a suddent burst of storm.

Jibhi, Banjar, & Aut have generally functioning ATMs. Other places may also have but don’t rely on them.

As far as I have seen, this region is well-developed in terms of connectivity. A lot of people choose Jibhi for long-term stay because it has good internet connectivity and your work does not stop if you are a digital nomad.

What else to do in Jalori?

You can always venture into the whole GHNP that borders the whole road.

2 thoughts on “Jalori Pass: All You Need to Know”