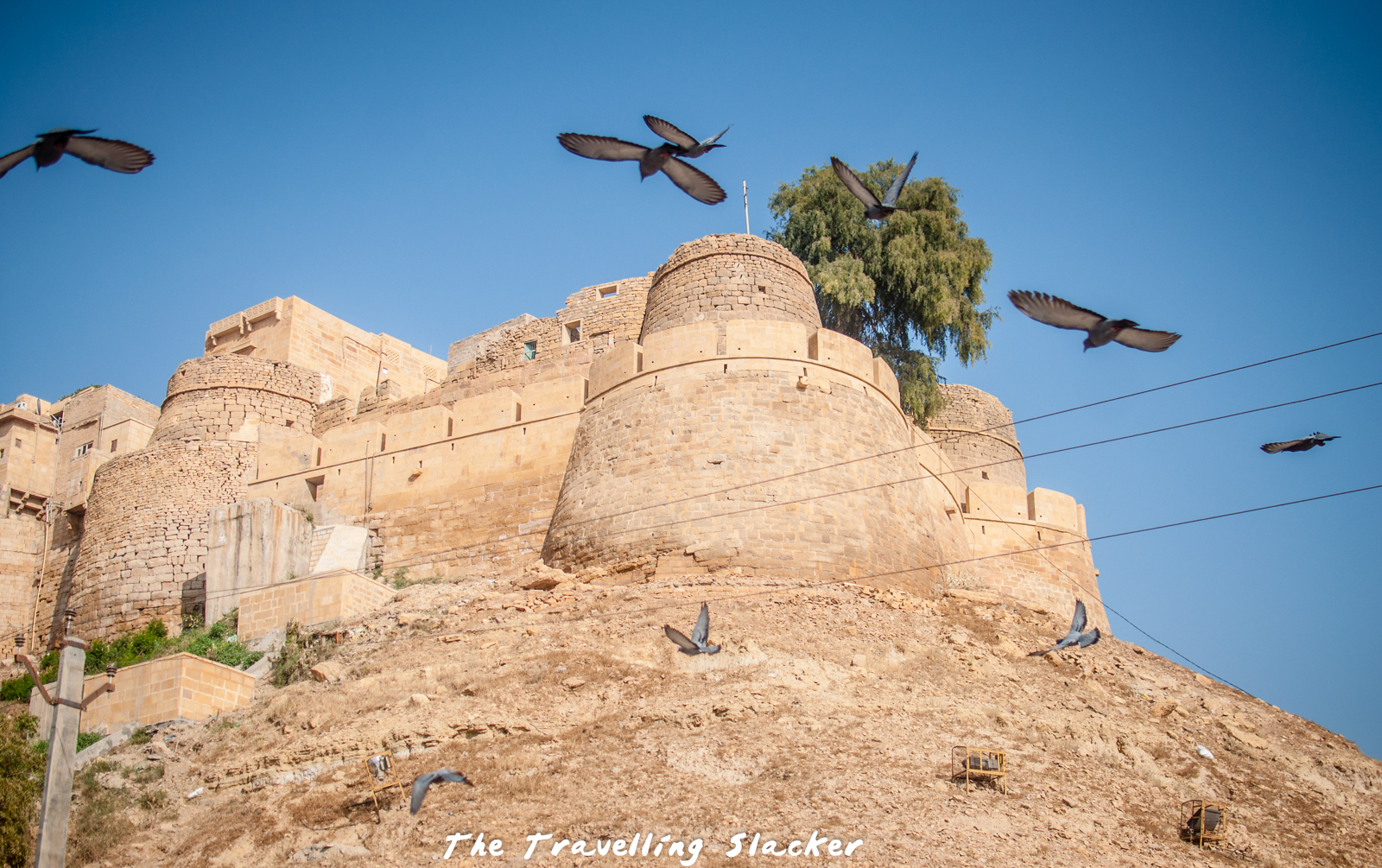 The first thing I noticed upon reaching the Fort area was the Bhang Shop. Now the questions was, whether to go for it or not? There was a possibility of achieving true enlightenment, that too in the desert, but the other possibility of losing control over myself while alone in a new city seemed alarming too. Nevertheless, I postponed that decision for later and decided to explore the Fort.

Jaisalmer Fort is one of those six Hill Forts of Rajasthan collectively declared to be UNESCO World Heritage Sites. The desert city of Jaisalmer also revolves around the Fort and most of the tourist oriented hotels and restaurants are also located around it. Also, it is a “living” fort, i.e. there is an entire township inside it, inhabited by people who used to work for the king and have been here for generations. Even the lower areas inside the walls are full of shops and restaurants along with living quartets. Before going inside, I took a round around the fort complex, clicking pictures from different directions.

As I approached the entry point, a local guide approached me, offering to show me around, for INR 100. I tried to ignore but he was persistent or probably desperate. I started running and he started chasing. Finally as I stopped, he offered to do the same for INR 50. So, I agreed and he guided me through various parts of the Fort for an hour or so. I saw some intricate carvings on the wall, large paintings and weaponry of the royalty. It was as massive a structure I’d ever seen, on par or probably bigger than the likes of Mehrangarh, Amber and Gwalior Forts.

I was wondering about the nearly uniform, round shaped boulders lined along some parts of the walls. He explained that these were used to throw at the enemies during siege. I silently mourned those foot soldiers who were asked to raid these walls over the centuries. He also came up with a few other claims that I could not fully trust. For instance he pointed out the colourful marble floor and claimed it to have medicinal properties. Apparently you have to keep a pot of milk on the floor overnight and drink it in the morning to avoid diabetes. There was also a painting depicting a local love story but sadly I forgot the names of the characters.

Finally we reached the terrace of the Fort and had a clear view of the city, which was not unlike the one I saw from Mehrangarh but that distinctive blue tinge of Jodhpur was missing here. We also found a miniature model of the Fort complex and the guide explained how Rajputs, Brahmins and Royalty live in different parts of it.

We came out from a different side and finished the guided tour. I paid his dues and roamed around for a while in the lower alleys of the complex, full of Italian restaurants. Jaisalmer  seemed to be the favorite hangout for Italians just like Kasol is for the Israelis.

In the evening I strolled lazily along the road to have a clearer view of the city. Jaisalmer is not a very big city and much of its activities are centered around the Fort and the tourism if generates. Even the new buildings are built and designed to look like traditional Havelis. In fact a couple of 19th century mansions near the Fort have also been turned into tourists destinations and they even charge their own entry fees.

Walking along the road, I came out of the Fort area and reached the Gadisar lake, the water reservoir of this desert city. However, it is not only a lake. It was lovingly developed by the same kings who built the Fort. So, there are several temples and other structures around the lake and a few even in the middle of it.

So, this was all I had from Jaisalmer. I wanted to explore more of the Jain heritage in Jaisalmer but I was short on time. Here is a nice post covering Jain temples of Jaisalmer. I also gave up on the desert safari plan because I had something else in mind that I will share next. You are still wondering about the Bhang shop? Well, on second thoughts, I think I should keep that part to myself.

11 thoughts on “A Meandering Walk Around Jaisalmer Fort And Lake”