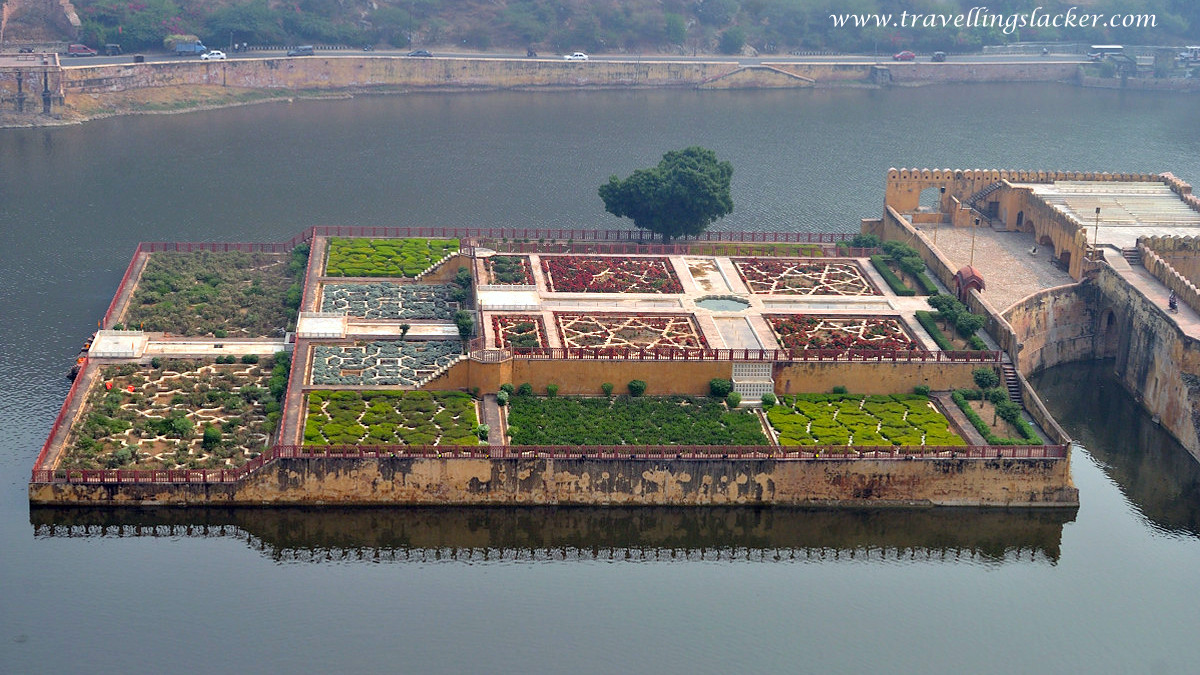 Jaipur greeted me with even more sun, more congestion on the streets and some good desi snacks. Jaipur was also supposed to be the point of rendezvous with KS. Now, KS is an old friend whose travelling aspirations are often vetoed by his professional pursuits. Regulars of this blog may still remember his Nepal snaps. Anyways this time around he was free and I asked him to join in so as to cut the hotel bills by half.

We basically had one evening and one morning in Jaipur. The evening, for the lack of better options, was spent munching Kachoris and watching Skyfall dubbed in Hindi at a local cinema hall. I spent the night pondering over the increasing insignificance of Bondgirls in the franchise (Or was Judi Dench herself the Bondgirl here?).

I did manage to take some snaps, mostly of pigeons and cycle rickshaws against the backdrop of pinkish royal gates that define this city and its sobriquet…

At the Jantar Mantar:

The next morning, we only had a few hours and hence decided to cover only a couple of attractions and painstakingly avoid scores of others. We first arrived at the Jantar Mantar, as it was the nearest attraction from our hotel. On arrival at the place, we learnt about the best feature of Jaipur Tourism ecosystem, the Composite Ticket. Unlike most other locations, here you can just buy one composite ticket for INR 50 and visit all the important locations in and around the city showing the same ticket (Please note that rates may differ for foreign nationals). Also, they didn’t seem to charge extra for the cameras. This was exactly the opposite of Jodhpur where I shelled out at least INR 500 on various tickets and permissions. 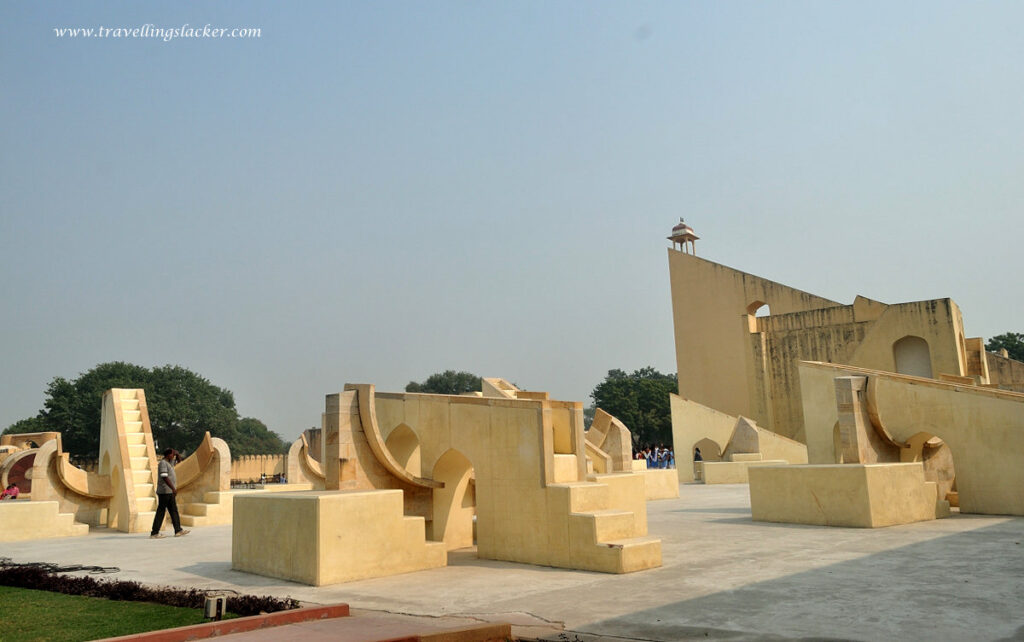 For the uninitiated, Jantar Mantar is a labyrinthine collection of astronomical structures built by the Rajput King Sawai Jai Singh II. Now, it is a pleasant surprise that he could even take some time out to build this. He was, like most of his contemporaries, was a man busy with politics and warfare. But he felt the need to achieve a better understanding of ancient and rich astronomical tradition of India and hence commissioned these large scale observatories in the 1620s. In fact he built five of them in five different places. The ones in Delhi and Jaipur are still there. I am not sure of the other three in Mathura, Varanasi and Ujjain still exist. The one in Jaipur seems to be the best maintained and still functional as it was located at the heart of his kingdom.

Various structures in the complex are built for different purposes. They are called Yantras (Gadgets) such as the Samrat Yantra, a huge sundial that gives local time and also locates the pole star, Shanku Yantra that gives you latitude. There are other such evocatively named Yantras although my limited understanding of astronomy and Vedic mathematics prevented me from realizing their potential. We tried various angles to shoot the structures. Some of them are so colossal that even the 18mm kit lens failed to cover them in one frame.

The importance of this structure is not only in resurrecting and preserving ancient achievements of Indian astrologers and mathematicians of yore but also in providing a platform where they could interact with the rapidly evolving post-renaissance science and technology of Europe. I personally think it is one of the last great works of any kind in the field of science in pre-colonial India. The western education system implemented by British was systematic and widespread but the achievements of ancient learning traditions were lost gradually. The biggest casualty of that has been the loss of rational thinking and inquisitiveness which has been taken over by token shows of devotion and pointless herd behaviour.

At the Amer Fort:

After Jantar Mantar we skipped several other attractions and moved to Amer Fort (also called Amber Fort by some). It is slightly away from the main city. In fact it was an older capital city of the region before Jaipur city was built. I had seen impressive pictures of this fort by other people and hence decided to see it myself. The main fort was built way back in 1592 by Raja Man Singh. It was built over some older and less formidable structures and several additions were made to it in the subsequent centuries. So, what we have now is a result of gradual construction sponsored by several monarchs. 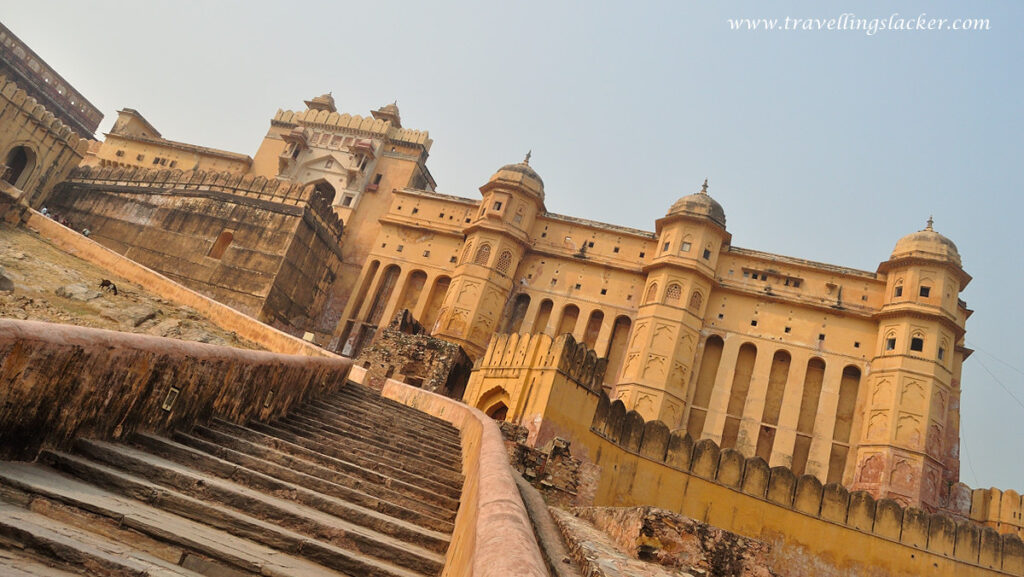 As someone arriving from Jodhpur after being overawed by Mehrangarh Fort, it is difficult to be impressed by size, scale and expanse. But the Amer Fort managed to do that. It is so vast that yet again I felt the need of a wide-angle lens although I was standing at a fair bit of distance from it. Apparently, it has a four points of entry and you have to climb up some tiring flights of stairs no matter which side you enter from.

There are multiple courtyards and each of them houses individual palaces. Overall the entire compound is so big that I am still not sure if I managed to cover everything. The one I particularly liked was the Sheesh Mahal (Palace of Mirrors), which is obviously adorned with mirrors. There are well-maintained gardens inside the compound but the best is the garden that is built on a protruded plot over the Maota Lake which the fort looms over.

By the time I was done with Amer, it was almost time for our train to Pathankot from where the real Himalaya Sojourn was going to start. I will be back with full scale travelogues

If you were looking for a full-fledged travelogue please forgive me this time because for me it was only a brief stopover on my way to the Himalayas and hence I have covered only a couple of attractions in Jaipur. That is why I am not going for full-fledged FAQ either. Want to make just a couple of points,
1. Buy the Composite Ticket that covers all attractions instead of individual tickets everywhere
2. Sun shines brightly in Jaipur as you would expect in Rajasthan. If you have a choice, prefer the winter season.