I don’t exactly remember the moment when I first heard the name Dholavira. It has been ages but surely it was some years after I was introduced to Harappa and Mohenjo-Daro. General social as well as systemic apathy towards ancient history in this country means that most of the people do not even realize the existence of these sites except the two big ones which are now in Pakistan. I remember a failed trip to Lothal once simply because none of the ignorant bystanders could point us the way to that site. Nevertheless, finally I was now in Dholavira, ready to explore my first ever Indus Valley Civilization (IVC) site. Well, technically it is nowhere near the Indus, which only demonstrates the expanse of that civilization.

I reached Dholavira after changing two buses from Bhuj, and after literally passing through the endless white expanse of the the Rann of Kutch, the salt desert. The road was smooth and straight and even the rickety bus flew for half an hour, inducing an adrenaline rush way beyond my expectations. It was almost dark by the time I reached and so I checked into the government tourist lodge that I had booked online earlier. I could not do much that night. There was no internet connectivity, so I slept early.

Early in the morning, I decided not to inquire too much about the route and just started walking towards the small hillock I could see from my lodge. I found out later that actually I had to walk a bit more up the road to reach the official entry gate that also has a museum. But I left the road and entered the bushes in search of a shortcut. The bush was full of birds, which made me write the previous post on Birds of Dholavira. But after a couple of hours I was practically lost as the view was completely blocked by the thick shrubs and elevated surfaces. I did not have much time remaining as I had to catch the last bus leaving from Dholavira at 12:30 PM or risk missing my train.

Anyway, after some anxious moments I finally reached the location, although from the opposite side. After crossing a small plot of cultivated land, I finally stumbled on something that looked like ancient water supply ducts but with my non-existent archaeological knowledge, I could not be sure.

I climbed up the hillock and suddenly I was in the midst of the 5000 year old necropolis. First I reached what is now called the “bailey” and was believed to be a residential area for the inhabitants. As I explored more, I started noticing many of the familiar structures I had seen earlier in books. Those ubiquitous brick walls were everywhere and they were so robust that they still show no signs of crumbling after 5000 years.

The geometric excellence of IVC is easily visible throughout the ruins. Everything is built in perfect shape although we cannot be sure of the purpose of some of the structures. Smaller structures are mostly in square or rectangular formation and I am given to understand that the entire city is shaped like a parallelogram. I saw a few stairs going underground, suggesting that a vast portion is still buried and awaiting excavation.

I also spotted the semi-circular formations with a (hopefully) phallic structure in the middle, the proto-shiva lingam as they say!

The main “citadel” is the highest point of the entire complex and it offers a good view of the entire area. Even in the present state, one can imagine that it was strongly fortified at one point of time. As I came down through the eastern gate, I also noticed the remnants of a room with bases of pillars. Especially, the round base has survived almost unscathed and it looked like a newly sculpted structure.

I’d started early in the morning and it was a bit gloomy which affected the images. By the time I reached the final segment, the sun was out and I got a few better images. Eventually I reached the reservoir, or great bath or whatever it was. It is basically a large rectangular compartment with multiple flights of stairs to climb down to the bottom. A common feature in most IVC sites, this also looks like a predecessor of all the baolis or vavs (step wells) that dot the northern and western plains of India.

Once I was done with the reservoir, I finally located what should have been my entry point. But it was not an issue anyway because there was no entry fee as I found out to my relief. I checked the museum that has been built at the entrance. Most of the movable artifacts have been stored and displayed here. Technically photography is now allowed inside but the caretaker was a good person and he himself encouraged me to take photographs. What you should look for here are the seals containing iconic IVC imagery such as the “unicorn” like animal and some symbols that apparently formed their script. 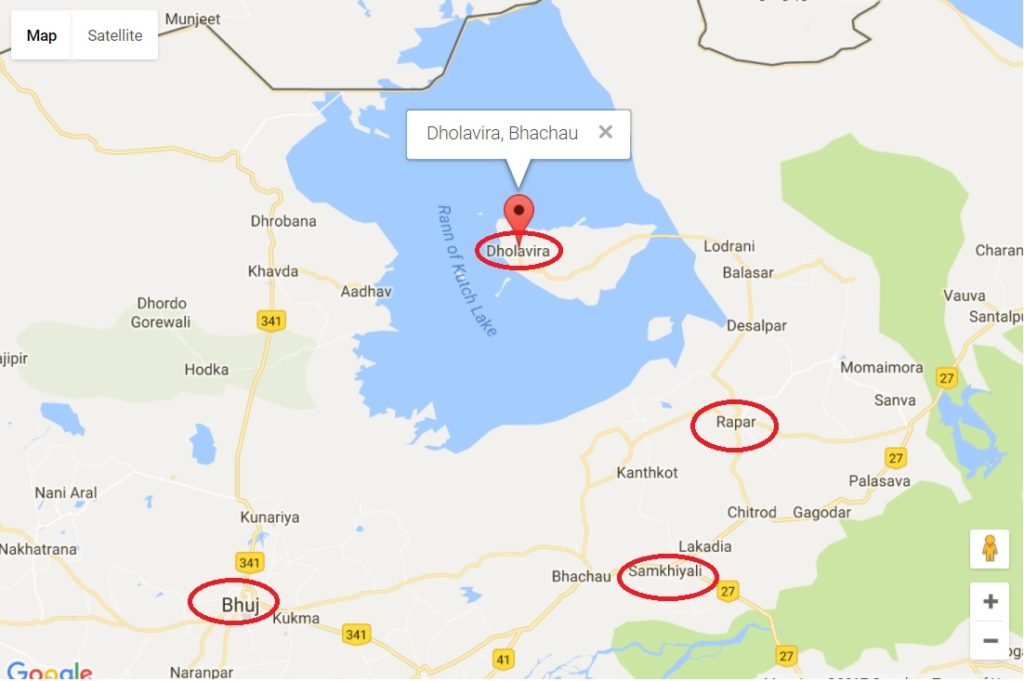 Where exactly is Dholavira located?

Dholavira is a small village inside an “island” called Khadir amidst the desolated salt plains of the Rann of Kutch in Gujarat. It is so remote that it takes a long time to reach it even from Bhuj, the biggest city in Kutch, which is round 220 kms away.

How to reach Dholavira?

Dholavira has to be reached by road and is pretty isolated from the big cities of Gujarat. But the good thing is that the roads are extremely good.

Assuming that you are already in Kutch, you can hire cabs from Bhuj but it is a long way and I personally feel it is a pointless expense. You get buses from Bhuj all the time to a place called Rapar, which is the nearest big town and takes around five hours. From Rapar you get regular government as well as private buses that take around three hours to reach Dholavira, which are actually a small village and mostly the last stop for the buses. You get buses from early morning till late evening.

On the other hand, if you are doing a standalone trip to Dholavira, you don’t have to go all the way to Bhuj. You can directly reach Bhachau from Ahmedabad on a train, and move to Rapar and so on. Check the map above for a better understanding.

Returning from Dholavira is a bit tricky because the last bus for Rapar leaves Dholavira at 12:30 PM and there is nothing after that. So, be careful in this regard. Once you reach Rapar, you can easily find buses to other places.

Mobile and internet in Dholavira

I think it is generally well connected in terms of mobile phones. Most major SIMs should work. However, there was no internet connectivity in 2014. I don’t know if it has changed now.

Taking bikes and cars to Dholavira

In case you want to drive or ride yourself, you should enjoy it because, as stated before, roads are smooth, straight, and not really crowded.

Stations like Bhachau and Samkhiali Junction and pretty close from Rapar. All Bhuj bound trains from Ahmedabad should stop here. From the you can get buses to Rapar and then to Dholavira. I had a return ticket from Bhuj station but I realized that there was neither the time, nor the need to get back to that place. So, I rushed back to Bhachau from Rapar and caught the same train after a couple of hours.

Where to stay in Dholavira?

Back in 2014, there is practically only one place to stay called the Toran Tourist Complex, which is a government rest house. I have seen some other facilities being built, but not sure how to contact them. As for Toran, one can just call them up for booking (The number I have is 097277 84044, not sure if it has changed now). It has nice cottages built in the shape of traditional huts with both AC and without AC. I paid INR 500 for a night for the non-AC room. Carry your photo-IDs and cash.

But as far as I can see, couple of new luxury resorts have opened up in Dholavira now. But I am sure they will cost much more.

Back then, I did not see any restaurants in Dholavira and the tourist complex where I was staying was the only source of simple Gujju Food. However, the situation may have changed now. Nearby town of Rapar has many shops and restaurants and if you want to buy packed stuff, this is your last chance.

How to reach the main site at Dholavira?

It is a brisk walk of a Kilometer or so from the tourist complex. Unless you are as adventurous as me, just keep walking along the road till you locate the entry point and the museum.

What other archaeological sites can I visit in Gujarat?

Archaeological wonders of Gujarat does not end with Dholavira although chronologically it is the earliest, along with Lothal near Ahmedabad. If you like history and monuments, there are many other delights scattered across the state. The best known ones probably are the Champaner-Pavagadh Archaeological Park and Rani ni Vav of Patan. Here is a great post about both these UNESCO World Heritage Sites from Gujarat for you to read and plan your next trip to this state. Also, in case you think I should explore any other such site in Gujarat, leave a comment and let me know.

26 thoughts on “Dholavira: Bricks of Oblivion”