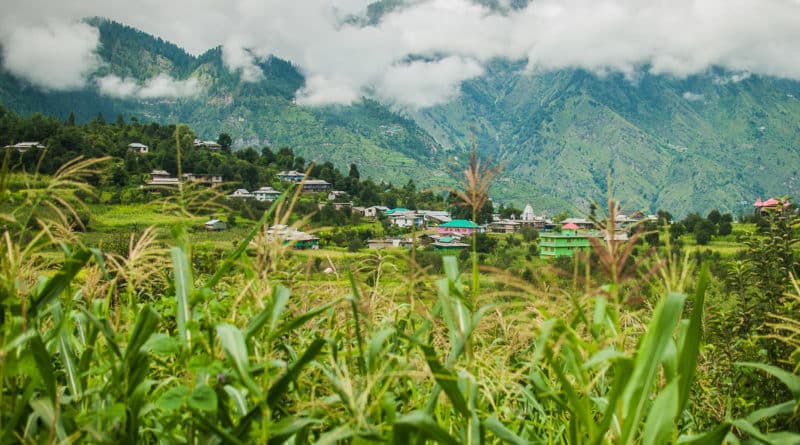 Spread The Love
After Upper Neahi, I quickly walked back to the Pundrik Rishi Lake. It was the primary target for this visit and I was done with it. However, I still had the whole day ahead of me and needed to do something more to make the most out of this trip. I decided to walk towards Deori although I was not sure if there was anything more to see there.

I had heard of Deori as the entry point for Pundrik Lake from the other side (I had taken a different route the previous day) and the village itself is generally not mentioned as a destination. I decided to see that village anyway and I started walking towards it. Initial parts were muddy and slippery hear too. However, this road was still better off that the Upper Neahi one and after 15-20 minutes, I started seeing the village on the horizon even as a mule caravan carrying apple harvest from local villages overtook me.
First the cedar woods gave way to apple orchards and soon I started seein the wooden houses and very soon, I was in the village. The first major building I crossed turned out to be the post office, one of the coolest post offices I have ever come accross. It actualy confused me as the place name here was written as “Banogi”. I figured out that Banogi is the name of the whole Gram Panchayat.

Deori or Dehuri or Deohari is one of the major villages in Sainj Valley. What is noticeable about Deori is that the village enjoys a great location of comparatively vast plain valley, fecund as expected, compared to the other tiny village clinging onto the slopes that I was coming from. One of the unique things here is the Devi Temple in the middle of the village. It is not the usual wooden structure of the hills but a more “mainstream” looking temple.
The vastness of this valley allows this village the luxury of an open community ground, surrounded by local houses and a school. For good measures, they have also installed a larger than life statue of a local woman!
The villaged seemed to have a few shops but all of them were closed. After walking around the village for a while, I located one open tea shop run by  alocal lady. By that time I had noticed some interesting structres on the horizon. So, I inquired her about them and she finally told me the name of a new village… Manyashi.

So, Manyashi is the village located higher up the hills, a short walk from the plains of Deori (Somewhat like Kamru Village from Sangla Town). It is clearly visible from Deori and apart from the village houses, it boasts of not one but two wooden towers!
So, after the tea and bun, I started walking towards Manyashi. The intial stretch was a vast agricultural tract. Apart from apples, these fields were teeming with maize, peas, tomatoes, cabbages, and much more. I think I even noticed a few patches of wheat. By that time the weather had improved and the fields looked at their agroerotic best.
The further I walked from Deori, the better it looked from the distance. I reached the base fo Manyashi after 15-20 minutes, where an apple and cannabis favoured trail was waiting for me.

The towers were also clearly visible now but I still had no clue about them. After a while, I saw a 5-6 year kid with a bucket. She quickly filled the bucket with the water form the lcoal stream (city kids of this age will never be able to life a bucket like this). I wanted to click a photograph but she disappeared quickly into a nearby house. I soon realized that this was the primary school of this village.
I walked past the school and finally saw a local adult, coming down with his herd of sheep. This man finally told me about the towers, which were indeed temples. The one on the left side of the village is dedicated the Pundrik Rishi (The same one from the Lake). On the other hand, the other temple on the right side is dedicated to a local deity called Janasar (if I heard it properly).
I spent some more time around the village although I did not go up to the temples. As per my past experience in places like Cheni Kothi & Pekhri, outsiders generally don’t get to enter such temples anyway. Still I wanted to spend more time here but it was around 2 PM and I got a call from the homestay saying that my lunch had been prepared. I started at around 9 AM and had already seen enough for the day. So, I decided to hike back to my homestay in Jhili Neahi (Not before clicking a few locals on request). Nevertheless, this is exactly the kind of place to where I’ll surely return. May be a few homestays will come up here too by that time.
So, this is all for the time being. This short detour reminded me why I started exploring Himachal to begin with. There is always one village, one valley, or one temple more to explore… beyond what people tells you and what your intial target is. Hopefully I will not have to wait for another year before coming back.

While I entered from the other side and then hiked to Deori, you can reach it directly from Sainj. From what I leant, there are at least 3 buses to Doeri in a day. One around 11 AM, another around 1-2 PM, and teh final one at around 6 PM.

Sainj Valley: All You Need to Know