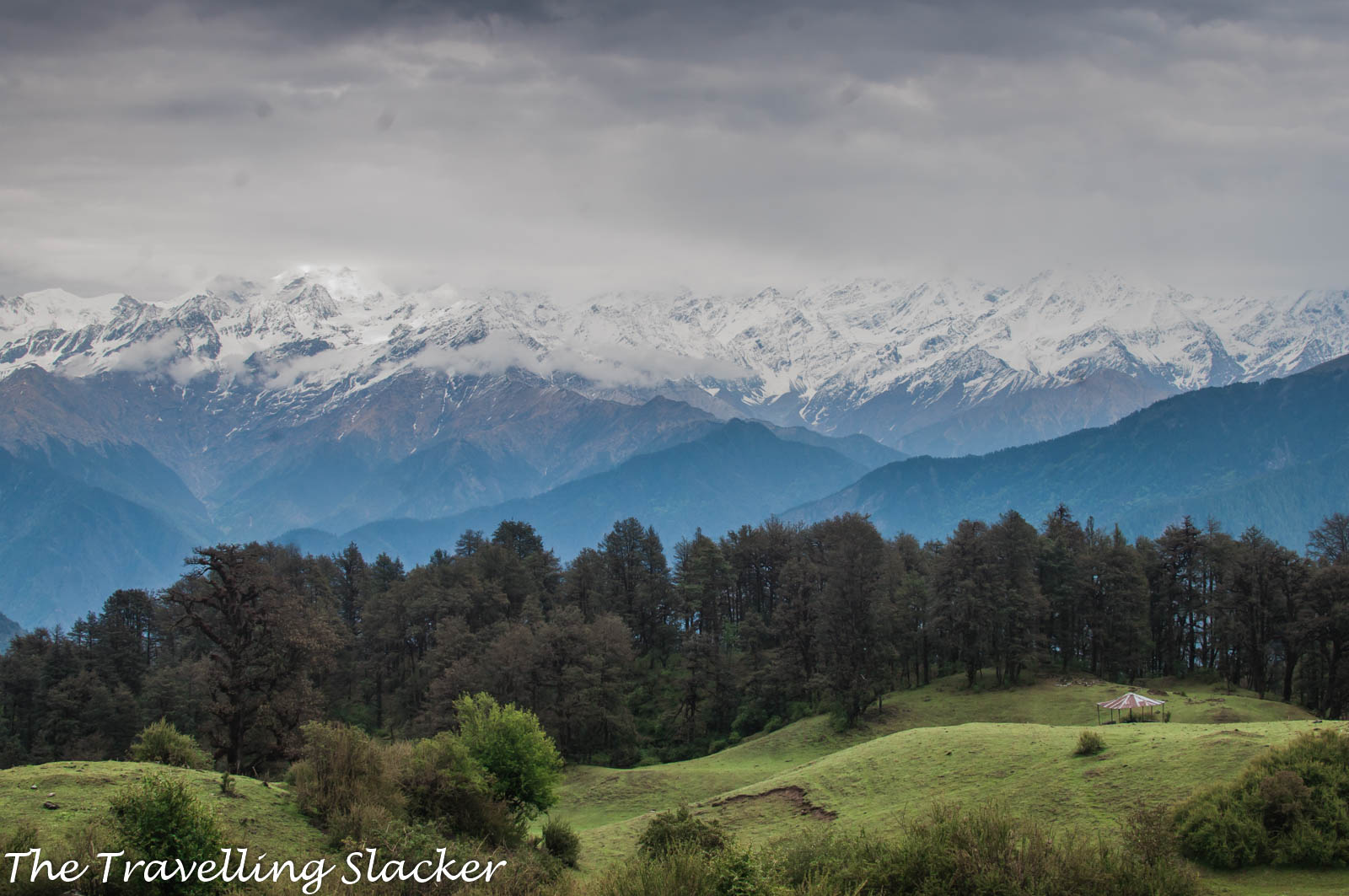 I was going through a lean phase. After a fast paced, and mostly successful stretch in Himachal (Most of those ones are yet to be written and published), I’d suddenly run out of luck. It started in Rohru, a place markedly “untouristy” compared to the rest of Himachal. I gave up whatever plans I had there and entered Garhwal via Hanol and Tiuni. I spent nights at places like Mori and Purola, with the Har-ki-Doon trek in consideration but that did not materialize too. I don’t want to get into the details but nothing was going my way. On top of that, the weather forecast was showing possibilities of storms and rains for the entire week for all the nearby destinations.

I reached Uttarkashi and at the risk of hurting sentiments, I must admit that I did not like it one bit. It was another one of those pilgrim towns, densely packed with overpriced hotels and restaurants. I quickly wanted to get out of that area but since I’d already come that far and hadn’t done anything worthwhile for several days, I wanted to complete at least one trek before leaving. I did some quick googling and the Dayara Bugyal Trek seemed to be the nearest thing to do from Uttarkashi. There are various 3-4 day trekking packages available online for Dayara Bugyal, but as far as I could see, the basic trek was no more than 7 KM long and so I decided to do it myself in a day.

Getting Started… a near failure!

So, this is one of those treks where reaching the starting point is a bigger challenge than the trek itself, especially if you are reliant on public transport. The first task was to get to Bhatwari from Uttarkashi and then reach the village called Barsu form where the trek begins. It is a small settlement 30 Kms away on the highway that eventually leads to Gangotri. However, there seemed to be no buses going that way. Some had left early morning and some others were scheduled for the afternoon, and I had arrived at the wrong moment. I tried to get into some of the small shared cars but they were either full or not interested for some reasons.

In fact, the time table at the bus stand mentions a bus that directly goes to Barsu but I was told that that bus no longer runs because it has been acquired for the services of the pilgrims. This is another problem in Garhwal during the pilgrim season. Buses from other routes are diverted to the main pilgrim routes to cater to the excessive inflow of visitors.

Anyway, I finally got a car after wasting around 3 hours. It turned out to be a smooth half an hour drive but my ordeal was not over yet. I’d already been warned about the lack of transport to Barsu by many people and they turned out to be correct. Nothing was going towards Barsu. It was more than 11.5 Km away and was a steep ascent. So, I decided not to just start walking like I generally do. The weather was also worsening and the storm promised by the forecasts.

Some of the local shopkeepers said that most of them are also from Barsu and if nothing else comes, I can go in their car at night, after shutting down the shops. So, I ended up waiting for 5 hours and finally at around 8 pm, one of them shut his shop, packed around a dozen people in his car and rushed towards Barsu. The road was mostly in good shape but it was pitch dark. The driver charged INR 20 and dropped me in front of the GMVN resthouse. The room was a bit costlier than I would have liked but it was too late and I had to take whatever was available. Thankfully the food was simple but really good for me after a tiring day. The driver as well as the people at the resthouse warned me about potential storms the next day.

In the morning there was no sign of the storm. It was a bright sunny day and I wondered if all the forecasts were actually wrong. But I was again advised to be quick and return sooner than later. So, I left at around 7.30 AM. Barsu village was also looking resplendent in morning light. I lost my way at first but a local woman guided me towards the right direction.

The first point was the Barnala Tal, which was 3 Kms away according to the map. But it took much longer than I anticipated. This is why I suspect that this stretch may be a bit longer than what is officially mentioned. After almost two hours I rose above the treeline and a vast, open area emerged. However, the first thing I noticed was not a rejuvenating, life-affirming, sight of glorious mountains but something completely opposite, a carcass of some animal surrounded by a wake of vultures.

However, I do like vultures so it did not bother me. They slowly flew away as I moved closer. It was a pleasant green meadow, but a steep one. It took some more work before I reached the top. The Barnala Tal turned out to be a small pond rather than a lake. A small temple is being built here by the locals. I talked to them for a while and figured out the path. More importantly, this is also the point where you start getting clear views of many great peaks all around. I am not good at identifying peaks. I have been told that Bandarpunch is visible from here along with many other named and unnamed peaks. I am not sure which one was that. (In case you do, please leave a comment.)

I reach… so does the storm!

After that vast open meadow of Barnala, the trail enters thick forests again. Officially this part is 4 Kms but this one I found to be easier and shorter. In an hour and a half, I was again past the trees and in front of a vast green expanse. The Dayara Bugyal had been reached!

However, the storm predicted by everyone had also arrived along with me. It was beginning to get dark at noon. I decided to quickly consume the packed lunch I carried from GMVN. After eating, I noticed a few tents on one side. Some other party was planning to spend the night there. Suddenly a few grazing mules also appeared out of nowhere.

The plan after that point is to climb higher and reach the highest point of the bugyal, what people call Bakhariya Top. However, the rains started before I could go any further. I noticed the last few blossoms of a pink rhododendron tree, and hid myself under the bush. However, soon I realized that it was not mere rain but a hailstorm. Thankfully, there was a tin shade a few meters away, probably built for exactly these occasions. I rushed to it and decided to wait for a while. The storm also obscured the remaining views.

I waited for at least 45 minutes and still there was no sign of the rains subsiding. However, in certain corners of the sky, I could see hints of azure and certain peaks had a golden tinge on them. I searched my camera bag and found a woolen cap that was desperately needed the brave the chilly wind. I searched again and found a packet with a cigarette from a different era. It helped me hold on for a while more but it was getting difficult. So, I decided to call it a day and started walking down before it gets too late.

I quickly came down from the bugyal and entered the treeline to protect myself from the hailstones. My descent was not as quick as I expected. The trek had become slippery and I had to be careful. On the positive side, the rain subsided a bit by the time I reached Barnala and the horizons opened up with some brilliant views of the peaks.

Rest of the trek should have been easy but I am not sure how but I took a different path after that point, which turned out to be a much longer one. I din’t mindbecause I was really getting good views of the wheat fields from that angle. It was around 5 PM by the time I reached. However, that was not the end of the process though. Leaving Barsu is as hard as reaching it. The next morning I missed the morning cars after a good night’s sleep and had to walk down all the way to the main road but that is not really a story worth telling.

How to reach Dayara Bugyal?
Dayara can be reached from the villages of Barsu or Raithal. Both are around 12 KMs from Bhatwari, which is around 30 KMs from Uttarkashi. The routes from both villages are separate but they eventually meet near the top. Both the routes are around 7-8 KMs long. The map below should help if you can read Hindi. 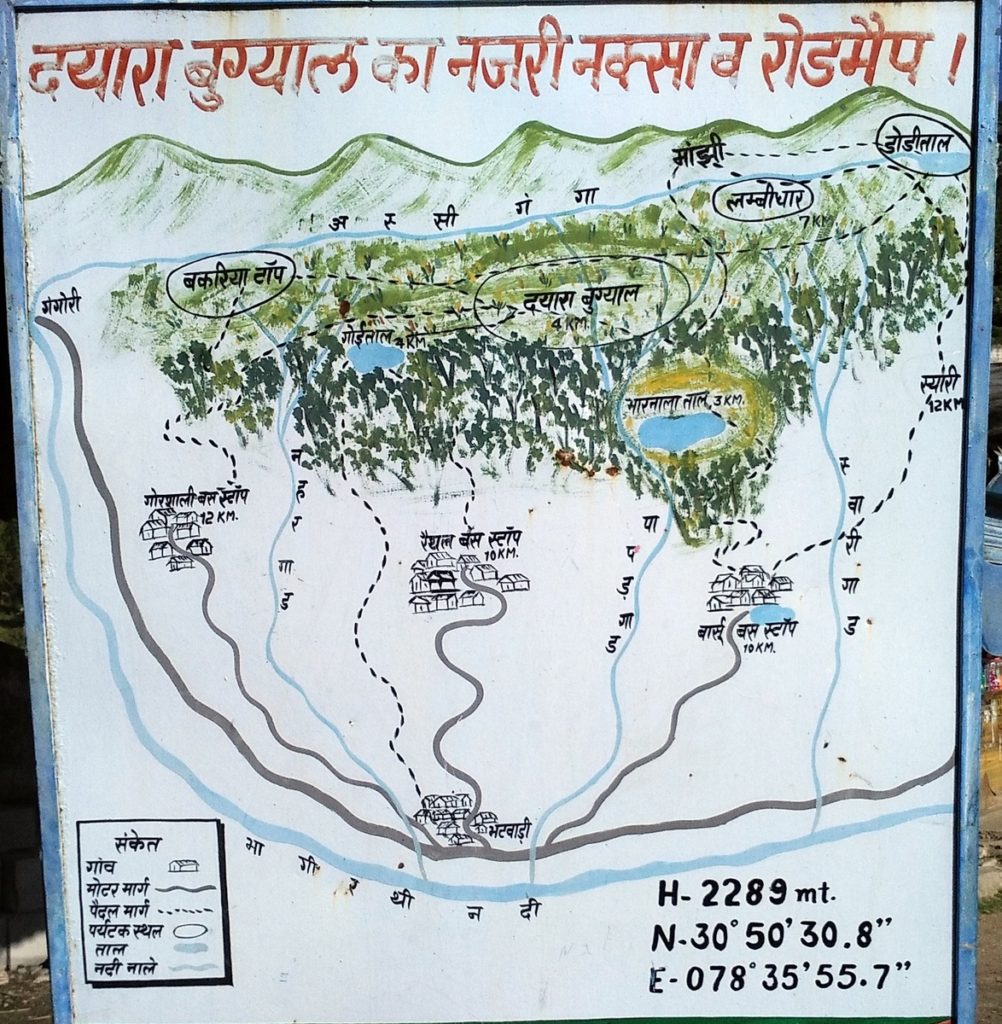 Where to stay for Dayara Bugyal trek?
At Barsu there is a GMVN resthouse and also a private resort. At Raithal also there is a GMVN property and some local homestays as per my information although I did not visit that village.

Do I need guides for Dayara trek?
It can be done without a guide. The trek is well marked. But to be safe, start early and try to return before dark.

Can the Dayara Bugyal trek be done in one day?

Yes, as I have described above, you can do the basic trek in one day and come back to one of the villages. But for better experience, you can camp at the Bugyal and come back the next day. One can also camp at Barnala, which is between Barsu and Dayara. If you want to see both Raithal and Barsu, you can enter from one side and come out from the other.

Can it be done in the winters?
Yes, the snow covered Bugyal will have a charm of its own. Although this is something I have not tried and you will have to be well prepared for the cold.

What else can be done nearby?
Another attraction nearby is Dodital, a high altitude lake. You can club both and turn it into a multi day trek.

Where to hire guides and supplies for the trek?
In case you need them, you can inquire in Uttarkashi or for that matter ask the people at GMVN for help. The villagers can provide mules and supplies too.

12 thoughts on “Dayara Bugyal: A Trek through a Hailstorm”