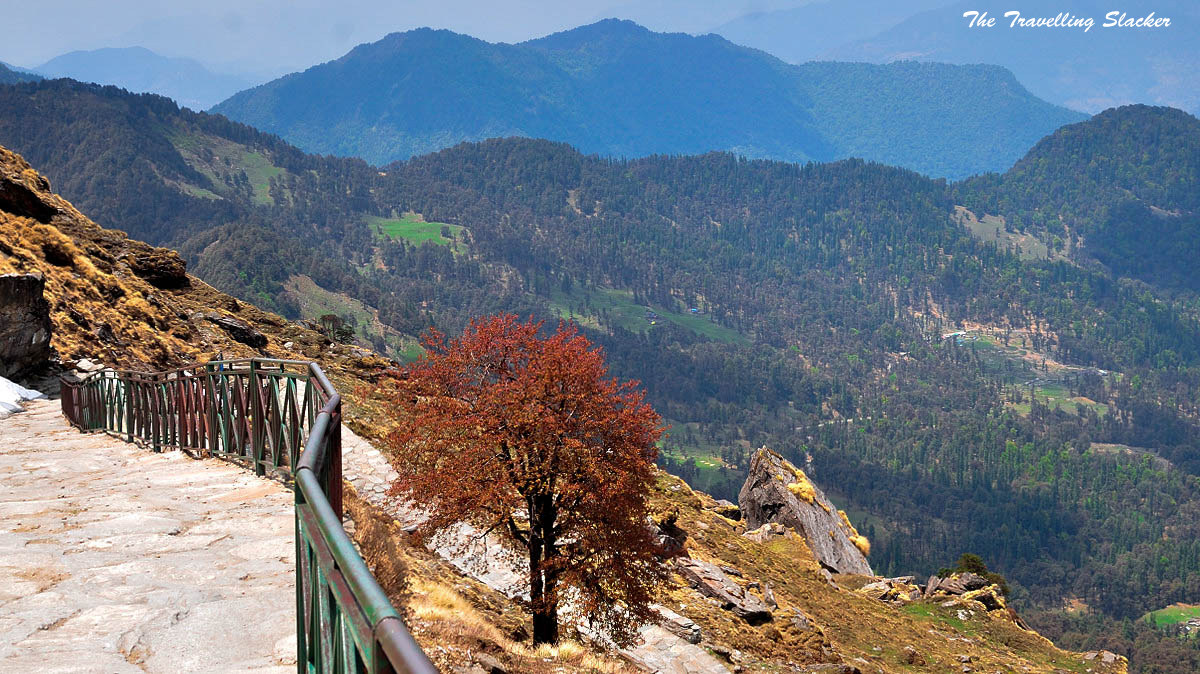 We were terribly exhausted after the Deroia Trek. The night bus journey from Delhi to Rishikesh, travel to Rudraprayag in a smaller bus, in a Mahindra Max (Which seemed to be most successful travel mode in the hills) to Ukhimath and finally again in the same mode to Sari village followed by the trek had sucked all our energies. The situation was made much worse by our urban sedentary lifestyle.

Just some small gyan here, the word prayag means confluence of rivers (think of the prayagraaj – Allahabad) and Rudraprayag is the confluence of the mighty Alaknanda and Mandakani. The route along Alaknanda will take you to Gopeshwar, Joshimath, valley of flowers and Badrinath, while we followed Mandakani up the river to Ukhimath.
Our day 2 started early at 6:30, though we still missed the lone bus to the Tala village, from where we had planned to catch the bus to Chopta that comes daily in the morning from Ukhimath. We bid goodbye to Negi ji and managed to find a maxx to drop us to Tala (I remember a hilarious incident here – the previous evening, Negi ji’s bahu was asking him in a very concerned tone, which is typical of the local dialect of Garhwali spoken in this part, if these poor guys have eaten something. I thought of showing of and answered in affirmative in Garhwali. The poor girl was completely taken aback and uttered something like ‘yeh beh’ (a literal translation is ooi maa).

We reached Tala is less than 30 minutes. We had overheard locals discussing that the lone bus to Gopeshwar is on election duty the night before. The rumours were confirmed at the kirana store at Tala. We ordered a chai and just stopped to look at the beautiful view of the valley below before deciding the next course of action. Meanwhile a friendly Bhotiya dog who seemed to love the wonderful morning weather came along and seemed visibly curious to know what these unusual people were upto. At one point, he even went and had a look at the valley below just to be sure of our object of attraction.

We found a Maxx soon again and after some negotiation were on our way to Chopta. The road to Chopta was the most beautiful till now. Our limited knowledge of plants and vegetation constraints the narrative and I blame it on our ‘science’ (read whatever makes us employable) oriented curriculum. The high point of the journey was the species of Langoors found at this height, which had a fur coat and cap around their faces unlike the ones down below.

Tala to Chopta is a small distance and after eating a couple of alu paranthas, we were on our way to Tungnath. This trek is very well maintained. We were feeling better after resting the previous night and were ready for the 3.5 km steep climb. There were Rhododendrons (Burans in local parlance) everywhere along the trek, though not in full bloom yet. If you are a flower enthusiast, the best time to visit is May end – June. We encountered a beautiful flatland (Bugyal) on our way with a herd of sheep grazing away in the glorious sun. Bhotiyas, who are basically shepherd dogs from the Tibetan Mastiff family, were doing what they do best – resting. Though to be just to these magnificent giants, they are known to extremely daring and efficient, even placing their own lives at risk to save their masters herd. A pack of two is supposed to drive even tigers away – a thing which was highlighted by many locals to whom we spoke.
We meandered along the trek breathing in the cool mountain air, stopping to shoot the snow capped mountains. There is a ubiquitous calmness at such heights which pushes thoughts out of the mind, momentarily of course.

Midway, there is a shop selling tea, cold drinks, packaged drinking water etc for the tourists. This was the place where we sighted snow for the first time in the trek. Also, if you are travelling this far, drinking packaged water is a blasphemy. The water from the springs (gadra for locals) is terrific and you should give it a try. As we moved up the trek, vegetation became sparser.

Just before Tungnath, there is a small Ganesha temple. The yatra season had yet not started and the temple doors were to open two days hence. We were hungry after all the climbing and headed straight into Ranaji’s shop cum lodge. After two alu paranthas and a tea each, we suddenly remembered that we are yet to fix a place for the night. This was not a worry though as Ranaji had a room ready. Our stomachs full and a place to stay finalized, the rest of the day was open and we headed to the temple in some time. The temple has beautiful bright colours which reminded me of Badrinath.

We clicked few shots and were on our way back when we sighted the state bird of Uttarakhand in all its glory in the meadow below. Himalayan Monals are one of the most beautiful birds you will ever see. We were not able to get close enough for a good shoot though and the bird just mockingly flew away from us while we were catching in. We had an early dinner. Some innocuous discussions later we dozed off tucked between two quilts and a kambal below. We had planned to trek to Chandrashila next morning and then head downhill to Chopta to take the return bus to Ukhimath, which came from Gopeshwar at 9-9:30. We woke up later than we had planned and after the morning tea, headed straight on our way. Enroute to the Chandrashila trek, we again witnessed Monal – this time two of them. Taking a cue from all the wildlife documentaries we had watched, we used stealth and caution to approach the birds and were finally able to take some great close up shots. The entire exercise had drained half of our energies and on the first sight of snow on the Chandrashila trek, we quickly reached to a mutual consensus to drop the idea and return to Chopta to take the bus on time. There is a separate 18-20 km trek to Gopeshwar from here and it would be interesting someday to explore the same. Morning sun also enabled us to have good shots of the Chaukhamba and Kedar mountains.

The downhill journey was much less demanding and quick. Our journey to the third kedar of the panchkedars was complete. The lone bus from Gopeshwar was on election duty today too and what did we find to go to Ukhimath – yes, a Mahindra Maxx again. Throughout our journey, 90’s music was omnipresent and we found ourselves enjoying the hopelessly romantic love songs of Kumar Sanu, Udit Narayan and Alka Yagnik. I thoroughly enjoyed the music and wondered if the current lot of music directors is too disconnected to the world outside of the metros.