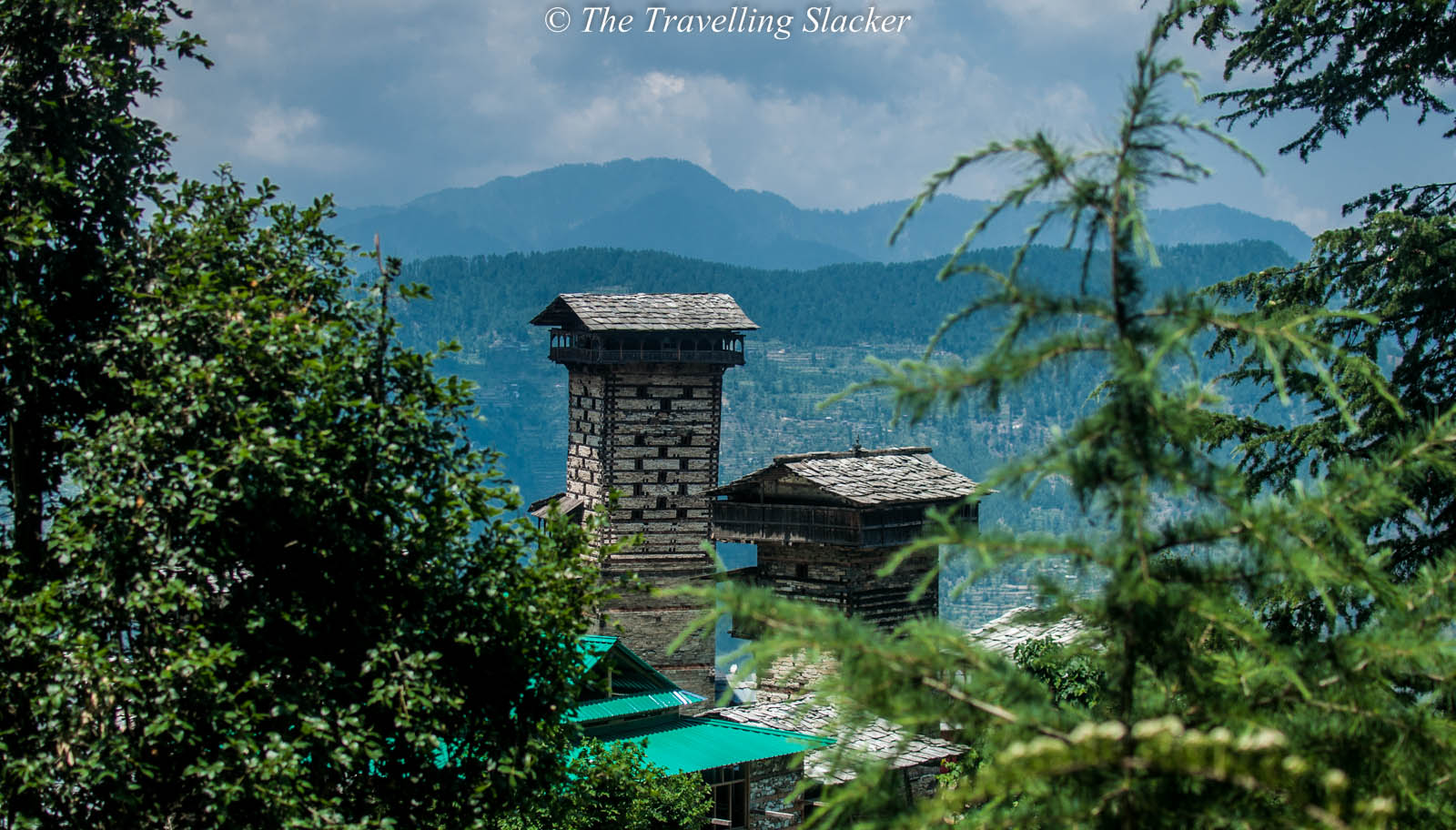 When I first heard of Chehni Kothi (also spelled Cheni Kothi or Chaini Kothi by some), it sounded like some old colonial bungalow. However, gradually I figured out that it is even older. In fact, it is a medieval fortress and there are not one but two structures. It is located n a village of the same name near Jibhi and it requires a short trek to reach. I was in Jibhi already at that point and this seemed nearby. So, I quickly decided to have a visit one fine morning.

I actually came from Mandi to Jibhi the previous day. I was told that it is hard to find a direct bust to Jibhi from Aut but I immediately got one moving towards Rampur via Banjar (check the map if this confuses you). It was afternoon and I was dropped in the middle of lower Jibhi (also called Jaipur). The first thing I saw was a Greek restaurant, of all things!

Anyway, I took up a room in the homestay called Jibhi Homestead after some bargaining. It was a nice family-owned place with homemade food and a good balcony with view of Apple orchards along with the hills. One night they even cooked Siddu with lots of homemade ghee. 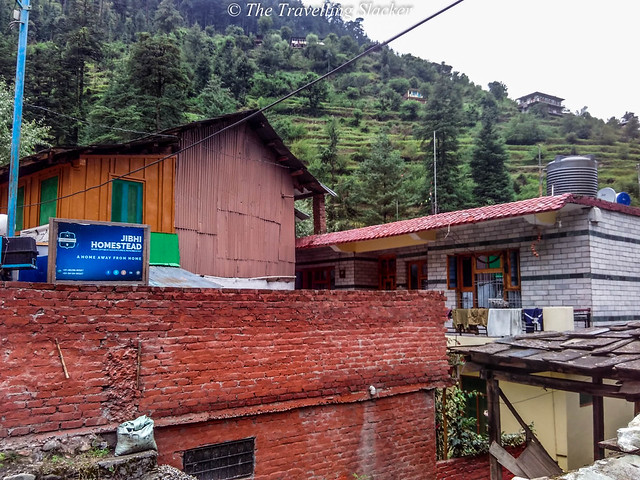 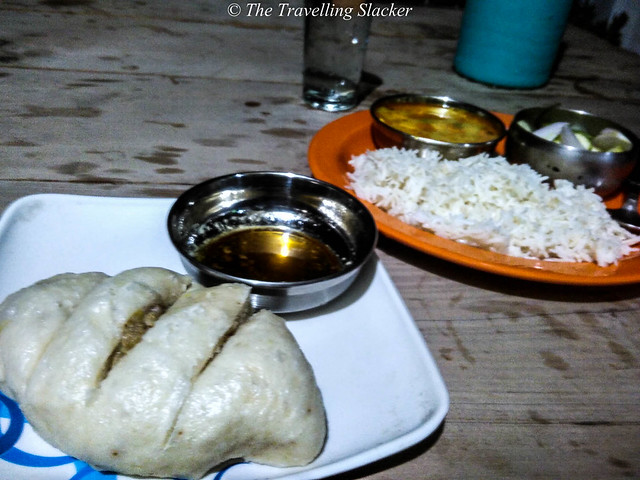 Coming back to the point, I was primarily interested in doing two things here. First day, I planned to trek to the Chehni Kothi village and see ancient Fort and some assorted temples. Secondly I wanted to trek to the Jalori Pass. The second part turned out to be a visual extravaganza but those images are yet to be processed. For the time being, let us focus on Chehni Kothi.

Cheni Kothi is basically a small village above the hills, known primarily for an ancient fort-like structure. Although it is called a fort, to me they looked more like towers and so I will use the term “towers” to describe them.

It takes a short hike from the road to reach the village. The starting point of the trek is a few kms from Jibhi towards Banjar. I was planning to walk the whole distance but in the morning the owner lady of the homestay gave me lift on a school bus that she was taking. She worked at that school and the bus dropped me right at the point where the trek started.

Initially I just had to walk along a motorable road with gradual elevation for 20 minutes to reach the Shringa Rishi Temple at a place called Bagi. It is a good looking, multistoried building with an architecture that is somewhat unique, almost reminiscent of pagodas of SE Asia. Shringa Rishi is the primary deity of Banjar region. However, this structure is apparently a newer one and so it looked more colourful. 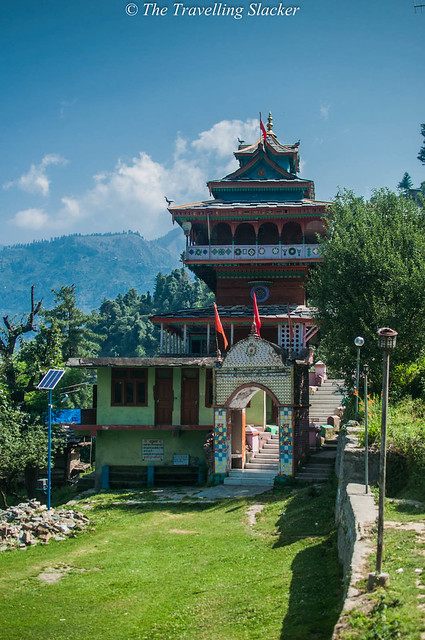 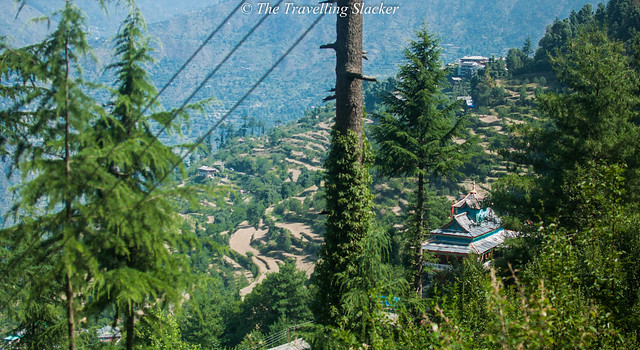 After this point, the motorable road ends and a real trek starts. Thankfully that was not very long either and after 40 minutes or so, the towers of Chehni Kothi became visible. 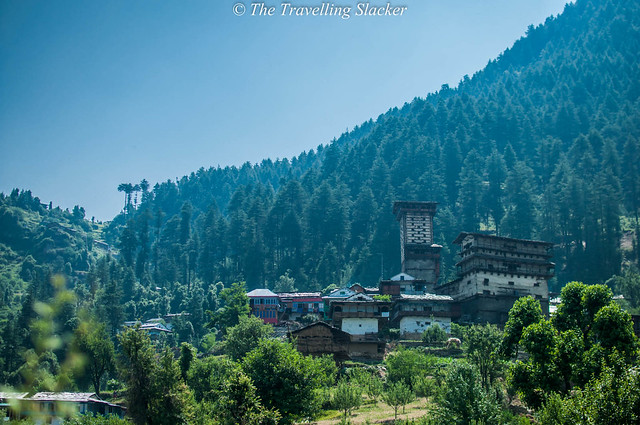 After a few minutes, I entered the village and reached the main courtyard with two towers on both sides. However, the first thing I noticed was the colourful romantic graffiti that I see in almost every unprotected monument in India. Sexual and emotional oppression in this society has bred a generation of hopeless romantics whose only hormonal outpouring is achieved through the defacement of heritage structures. 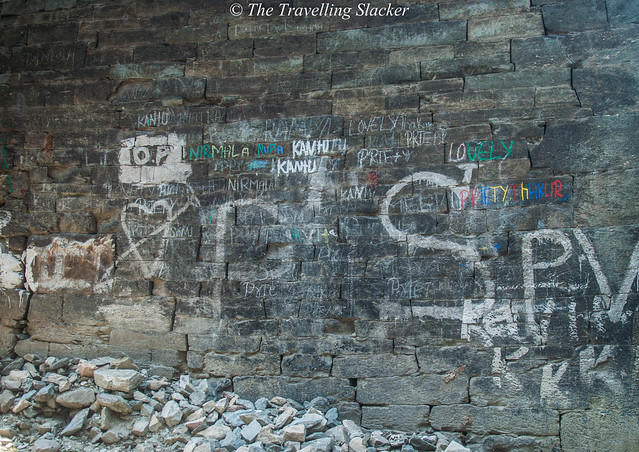 Anyway, these towers were much bigger than they looked for the distance. for the sake of clarity, there are two towers. The taller one is the famous tower of Chehni Kothi. It was even taller but lost a few meters during the earthquake of 1905 and it is still close to 50 metres as per my estimates. The other tower is shorter and served as a temple. One can imagine that soldiers could garrison inside in case of an attack. Both are made of stone and wood and there are wooden stairs to reach the higher floors. However, outsiders are not allowed to climb the stairs. 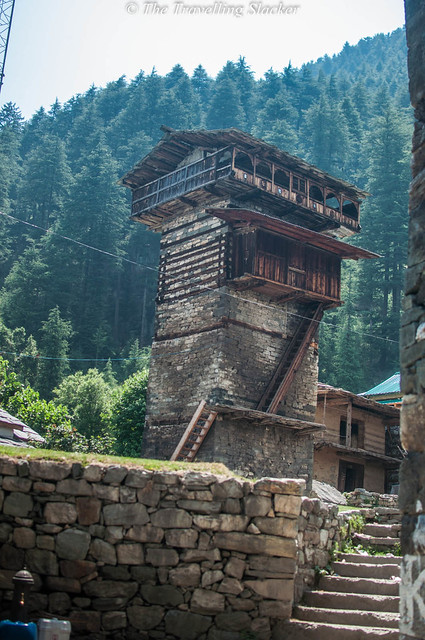 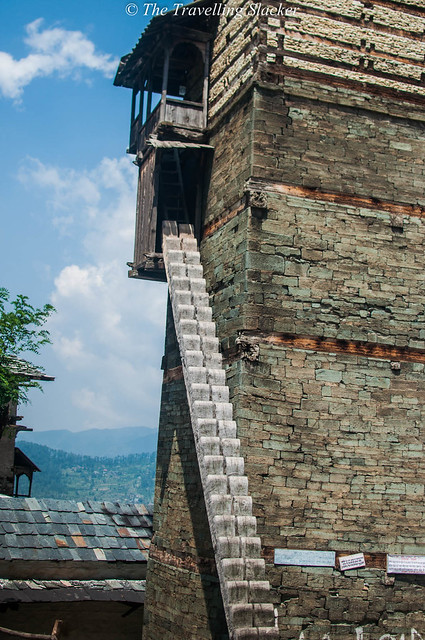 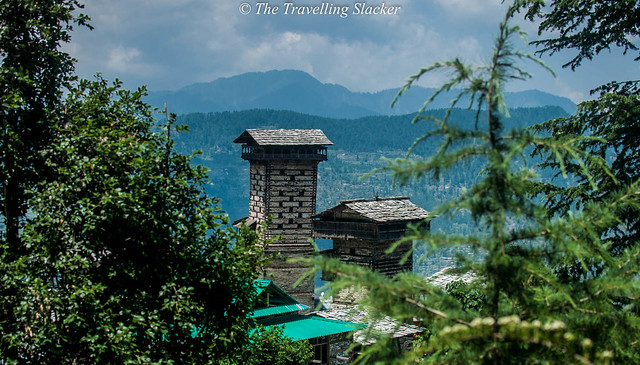 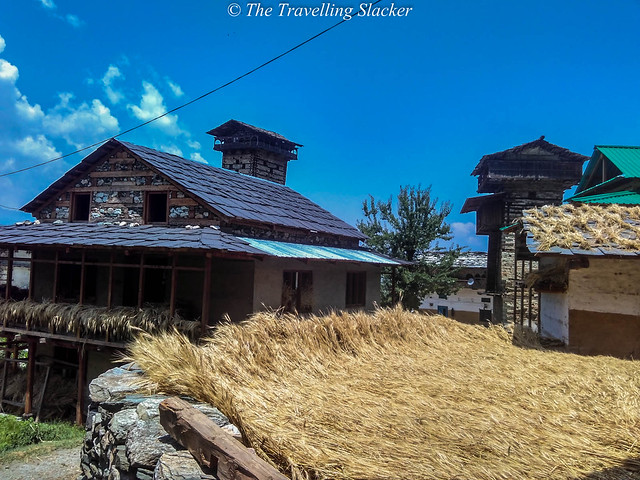 As far as the antiquity of these structures are concerned, I am not quite sure. These were built by medieval Kullu kings and should be a few centuries old. However, I have seen some online sources mentioning that they are 1500 years old. Personally I find it highly unlikely but I could not find any conclusive or authoritative information regarding them. 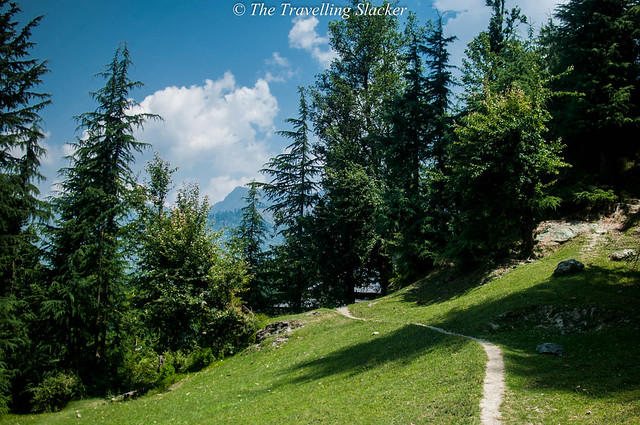 I spent some time around the village, and also explored the trail that goes further upwards. There is another temple somewhere in the upper reaches but I did not have enough time remaining for that and I had to preserve my energy for a much longer trek the next day. So, let me finish with a teaser from the next day. I will be back with more details soon. 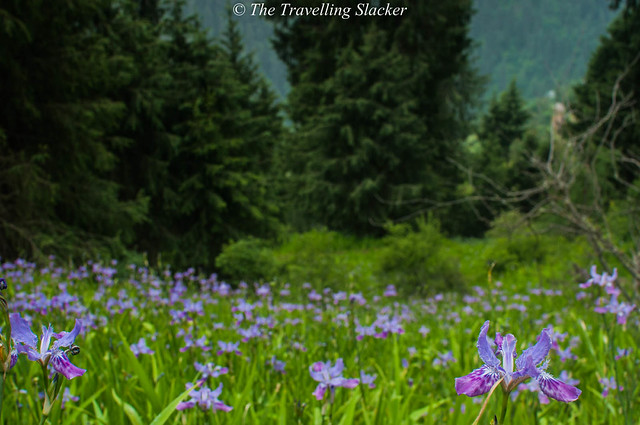 How to Reach Chehni Kothi?

The road head to Chehni Kothi is somewhere between Banjar and Jibhi. It should be 3-4 Kms before reaching Jibhi if you are coming from Banjar. From Jibhi, you can catch any Banjar bound vehicle and keep an eye on the right side for signage. In fact, you can even walk from Jibhi if you have nothing better to do (I walked back to Jibhi). The hike from the road to the village should take around 30 minutes. En-route, you will also come across the Shringa Rishi Temple.

Things to Keep in Mind

Do note that outsiders are not allowed to climb up the towers as per local customs. So, do not try to do anything funny, even if you do not see anyone out there. You can ask politely but do not be pushy if denied.

This is just one small attraction in the Banjar-Jibh-Jalori-GHNP region. Read the complete guide to the Great Himalayan National Park to find out what else you can do around this region.