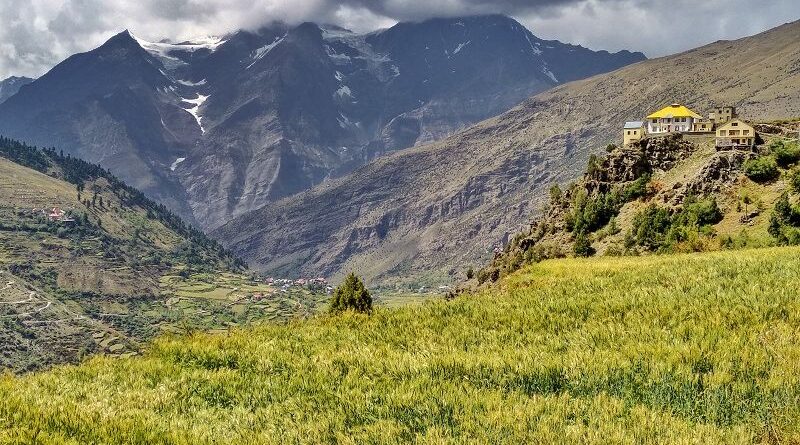 This is a guest post by Swapnil Sanghavi of Backpacking Nomad about Bokar Gompa in Lahaul. It complements the posts about various other Gompas that I have visited myself in and around Keylong.

Lahaul, also known as Garsha Khandroling has always been one of the most sacred places for Buddhists for centuries. Lamas, Yogis, Scholars from faraway lands have meditated here for thousands of years. I personally have a strong inclination towards exploring these incredible monasteries or Gompas of Lahaul. The peace and tranquility that these monasteries offer are just otherworldly and impeccable vistas you get to witness just makes it even better thanks to these Gompas being perched at a relatively higher altitude than the villages. This blog is an account of my travels to such beautiful Gompas of Lahaul which always leaves me awestruck.

Bokar Gompa: One of the Most Beautiful Monastery Hikes in Lahaul

After wandering around for good 6 days across different sub valleys of Lahaul visiting ancient monasteries, peaceful rustic villages, high altitude lakes, the idea was to end the Lahaul trip on a high by visiting the mighty Shinku La – The new motorable gateway to Zanskar.

But the plan never materializes thanks to the terrible roads and exorbitant prices of 4×4 drive. Anyways It seems like most of the time has to be spent sitting idle in the hotel room in Keylong. But The hotel guy suggests an interesting prospect – A hike to the Bokar Gompa. Thanks to me witnessing some beautiful monasteries in the past few days the hike to Bokar Gompa sounds perfect to me.

Initially, I was a bit anxious about going all alone but the hotel guy assures me the way is well marked and it should a wonderful experience. He explained the way and I set out all alone to explore what would be one of my finest experiences in Lahaul.

Initially, I walk for some 800 m towards Darcha on Leh-Manali and then a small trail going up marks the beginning of the hike to Bokar. Even though the trail is narrow, but the climb is a gradual ascent. I continue my saunter to the Gompa amidst the pretty blue pines and incredible high mountains all around. But not a single soul to be seen.

I gained altitude and now have a bird’s eye view of the Leh-Manali highway. Bokar Gompa is also now visible to me and it still appears to be far away. I keep walking on the trail, but something is amiss. At some point, I realize that I am not on the right path as Bokar Gompa now seems even farther away.

Turns out I completely missed the steep rocky path I had take which would have eventually taken me to the Gompa. But in hindsight, it turns out to be a beautiful mistake. I have probably made it to a nearby village instead of Gompa. I reach a house and cry for help. Seems like apart from cattle nobody has heard my desperate pleas for help. Eventually, after a few minutes, an elderly woman appears.

I tell her that I lost my way to Bokar Gompa. She tells me not to worry and shows me the way to the Bokar Gompa through the farms of the villages. Now I have made it to the motorable road which connects Bokar Gompa. Me losing the way and reaching the village instead of Gompa resulted in me getting some incredible shots of Bokar Gompa with the peaks of Gushal Goh in the backdrop.

Finally, I reach the Gompa. I ask around about the Lama or caretaker so that they open the locked door to the monastery.  The Lama or Caretaker appears and unlocks the door of the monastery for me. Apparently, there are two rooms in the Gompa. One is the newly constructed one, where the statues seem to be modern. While the other room is an old one with old statues and artifacts. Like most of the monasteries in Lahaul, Bokar Gompa is also a Drukpa sect Gompa founded by Tsering Be. The statues of Buddha and Padmasambhava are common across all the Gompas.

I can now see the entire Kyelang town with incredible peaks of Gushal Goh in the backdrop from the Gompa Premises. The landscapes feel otherworldly as I quietly sit for a few minutes to soak in the tranquility. On the other side, I could spot the lady of Kyelang glacier and numerous peaks engulfed in clouds some still donning white blanket.

While rummaging through my gallery of pictures of Bokar Gompa, I realize that I had also clicked a picture which at the moment I didn’t know was Rangcha Gali one of the routes to the sacred Dril Bu Ri peak. Now it is time to leave, this experience has inspired me to visit each and every Gompa in Garsha. After asking for directions, I finally descend via the correct trail which I earlier missed. But not before losing my way for a few moments. The rest of the descent is uneventful. But I still have a lot of time and I am contemplating paying my obeisance at Yardong Gompa. 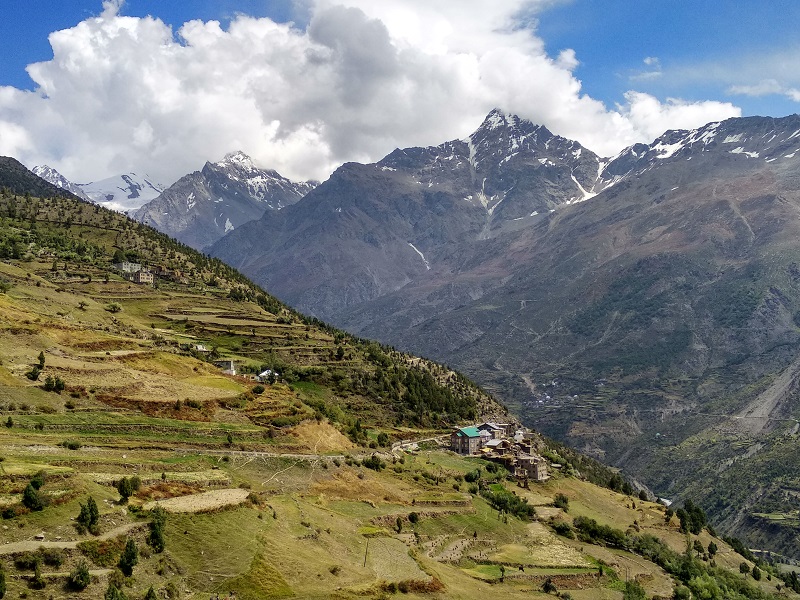 So, I wait for the bus at the new Kyelang bus stop for a good 30 minutes and then finally decide to give up on that idea as I feel a bit weary. The last day in Lahaul is well spent. I do manage to visit Yurdong Gompa on my short winter trips one and a half years later.

How to Reach Bokar Gompa

After some 800m or so, just keep an eye on the narrow trail going upwards on your left-hand side. This is the very first trail you’ll be encountering after starting from the New bus stand. And this where the hike to Gompa begins. Keep following the trail and at one point you’ll spot a steep rocky path going to the Gompa. Now, this can be easily missed so I would suggest you hike with someone who is a local. Or you can continue on the marked trail itself which will get you to the village. And then from the village, you can easily reach the Gompa via motorable road like I did in like 5-10 minutes. Of course, this will take longer

How much is the distance from Keylong and Time taken

To be honest it’s quite an easy hike. The distance one way should be around 2 to 2.5 km one way for Kyelong new bus stand. Fit people should reach up in around 45 minutes from the Keylong. Of course, take your own sweet time as per your fitness to reach and explore the ancient monasteries of Lahaul.

One thought on “Bokar Gompa near Keylong, Lahaul”