The Bashleo Pass Trek was one of the primary objectives of this foray into the ecozone of the Great Himalayan National Park along with Shangarh. In between, I ended up doing other things but time had now come for the actual trek. I started along with Travelshoebum from Thewaramji’s homestay (also mentioned in the previous post), after having a quick breakfast and with some Bar One chocolates as a ration for the rest of the day. The trek starts right from the village. The route is well marked and there is an official board that psychologically prepares one for a 10 KM hike to the 3300-meter high pass. 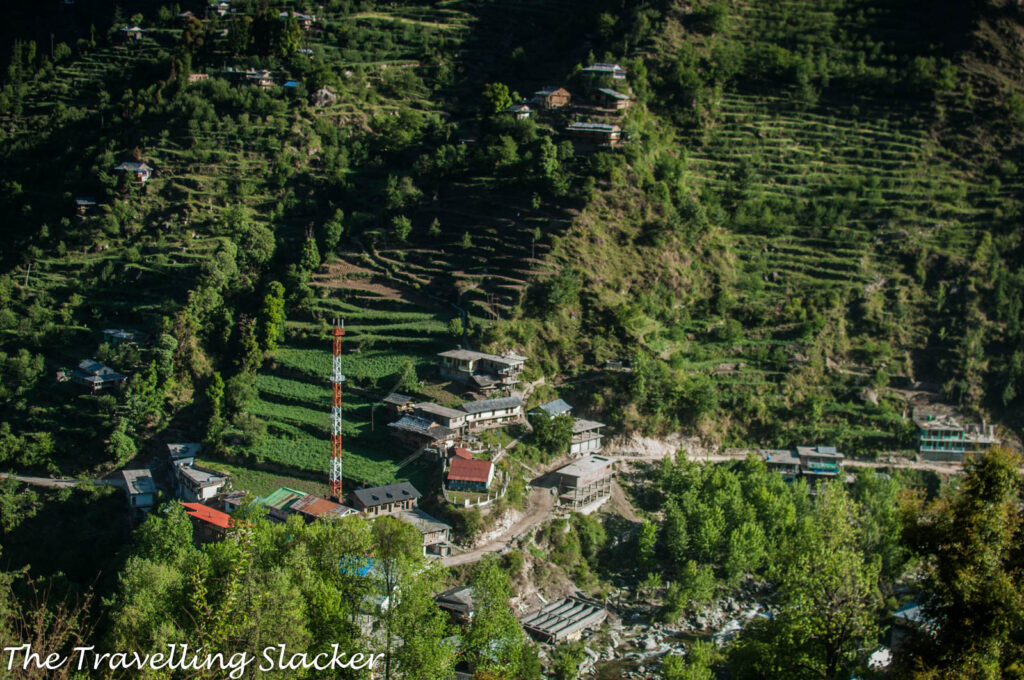 We initially walked fast, passing by scattered homes, small terraces of wheat, apple orchards, and getting a better view of Bathad village from a higher altitude. After a while, it got a bit tiresome but then we saw some school kids coming down. They live somewhere up in the hills and trek every day just to reach school. This made us push harder and soon we passed the inhabited stretches and entered the jungle. 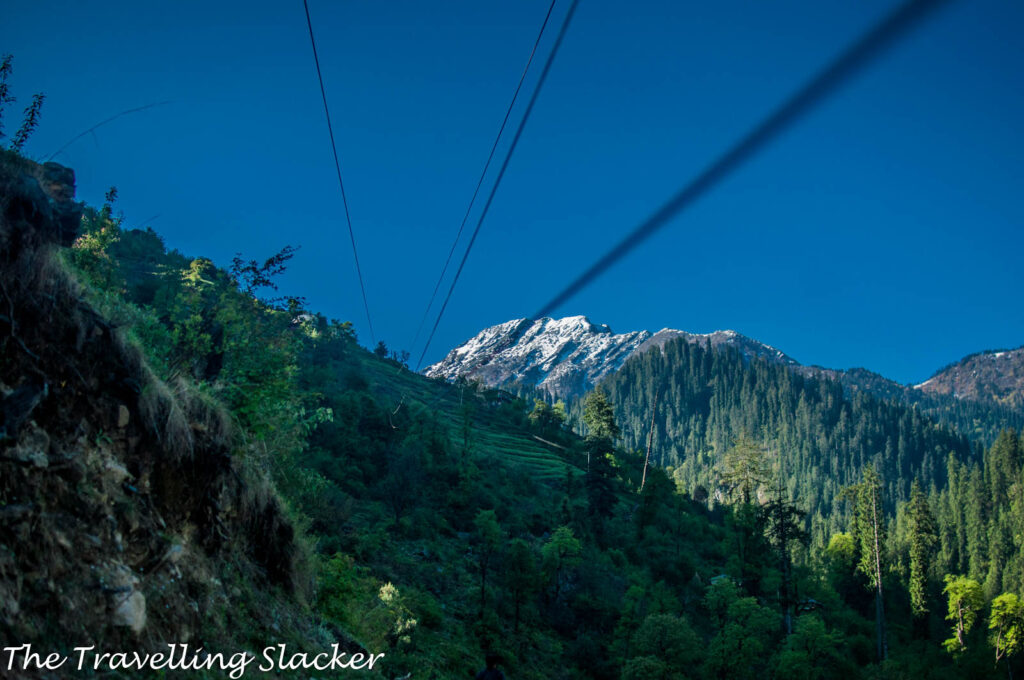 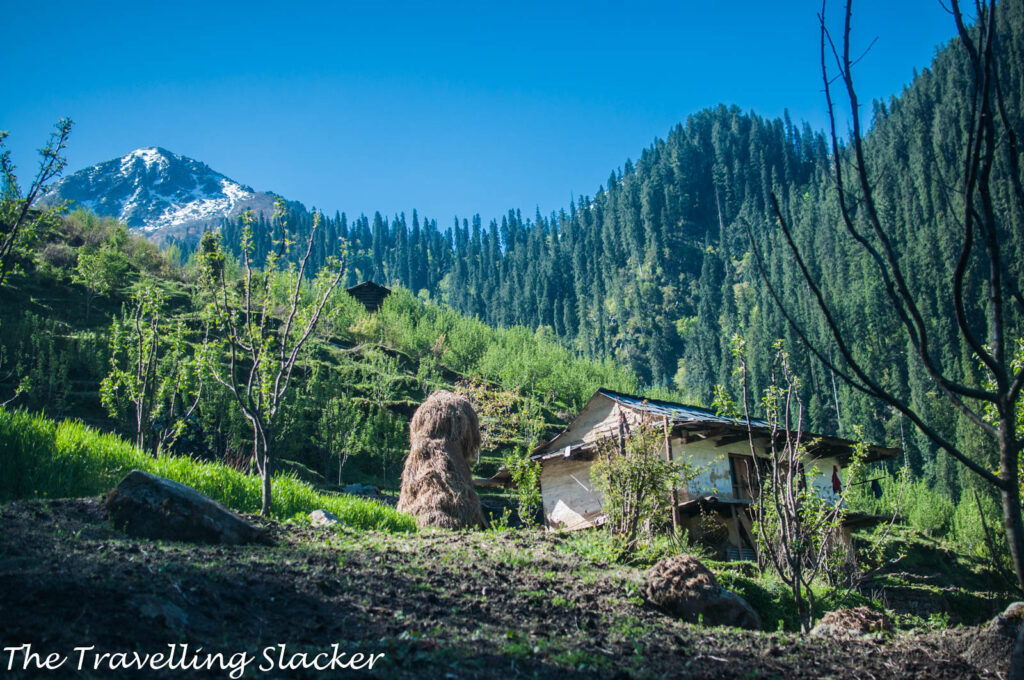 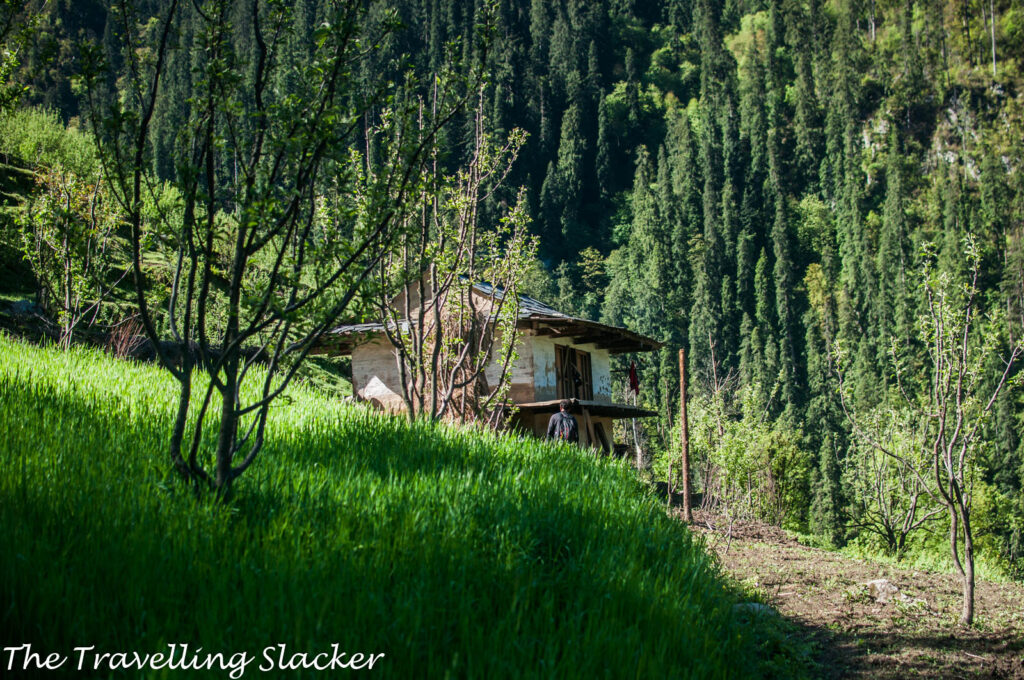 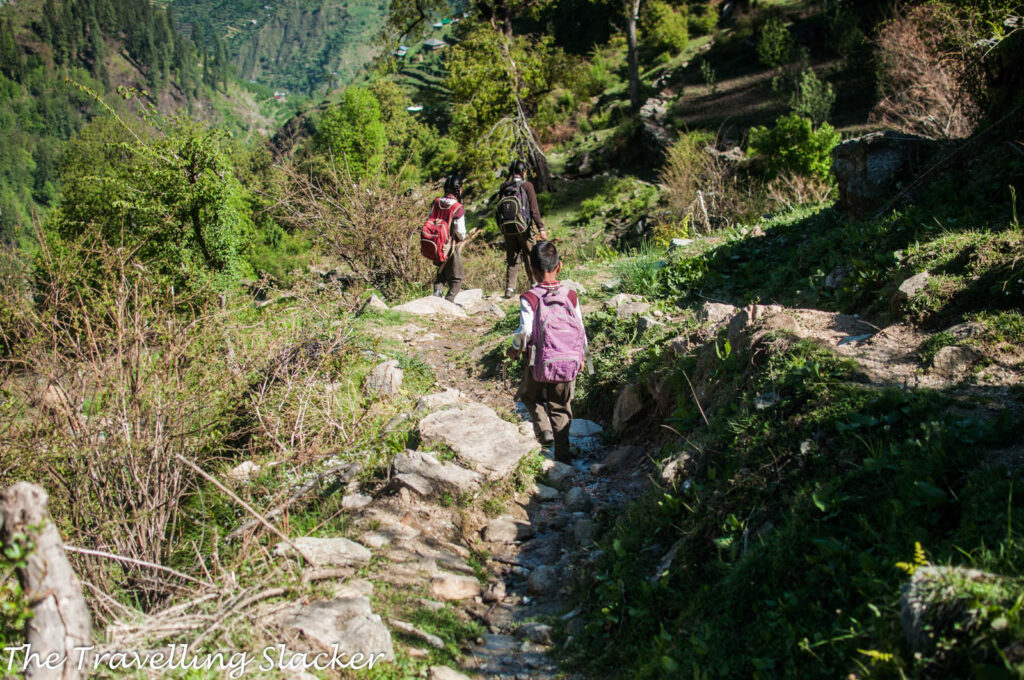 Although it was a sunny day, the thick canopy of the jungle was filtering the light, turning the path into a resplendent green tunnel. It took around an hour to finally rise above the forest and arrive at a open meadow but I could see more jungles in front of us. However, there was a distinct change in the nature of vegetation at this point. Instead of green, the trees are now full with leaves displaying various shades of yellow and orange. Such autumnal colours were not what I expected but I guess I’d underestimated the late spring. 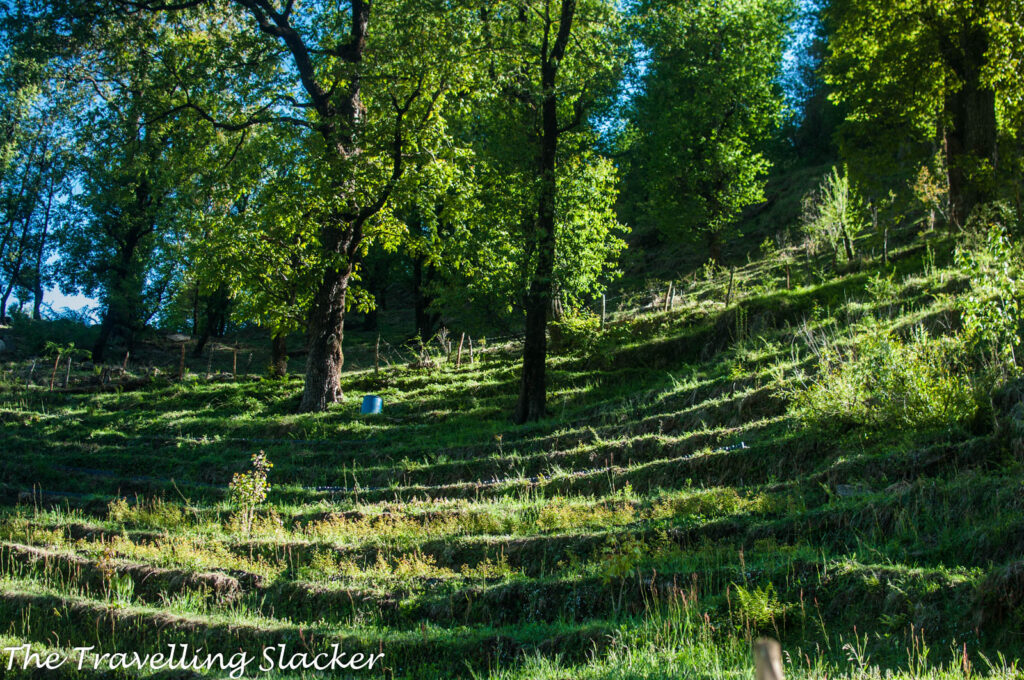 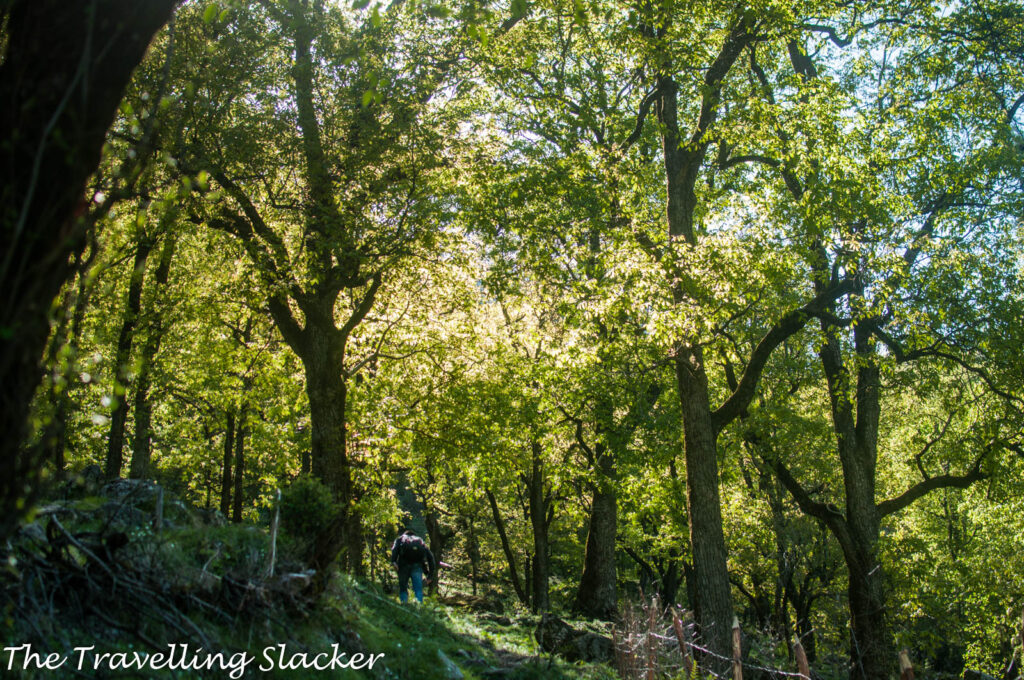 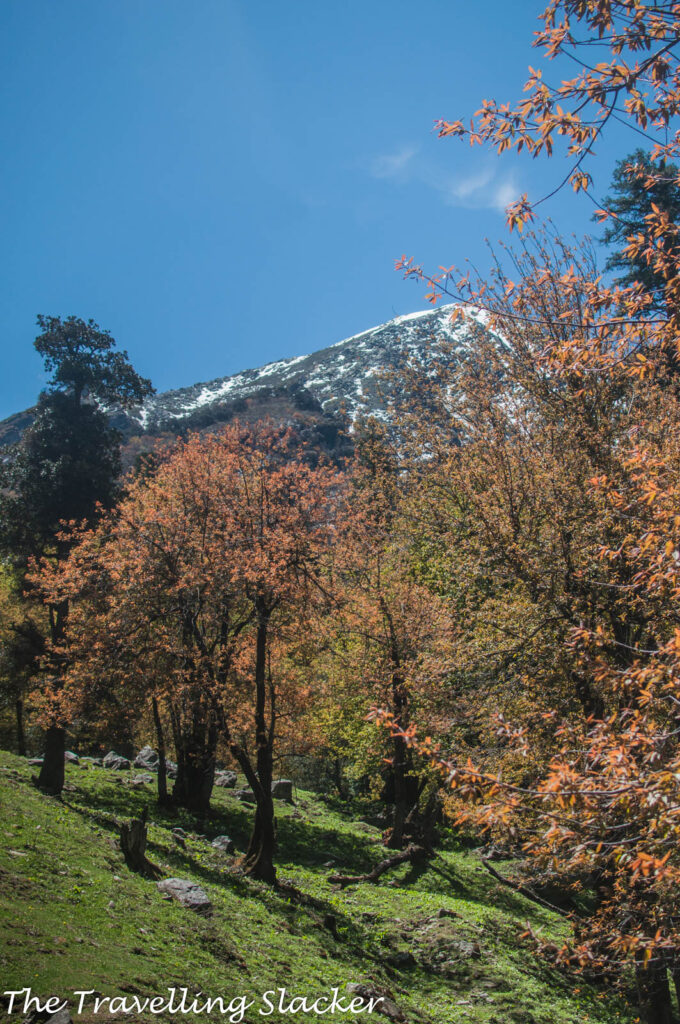 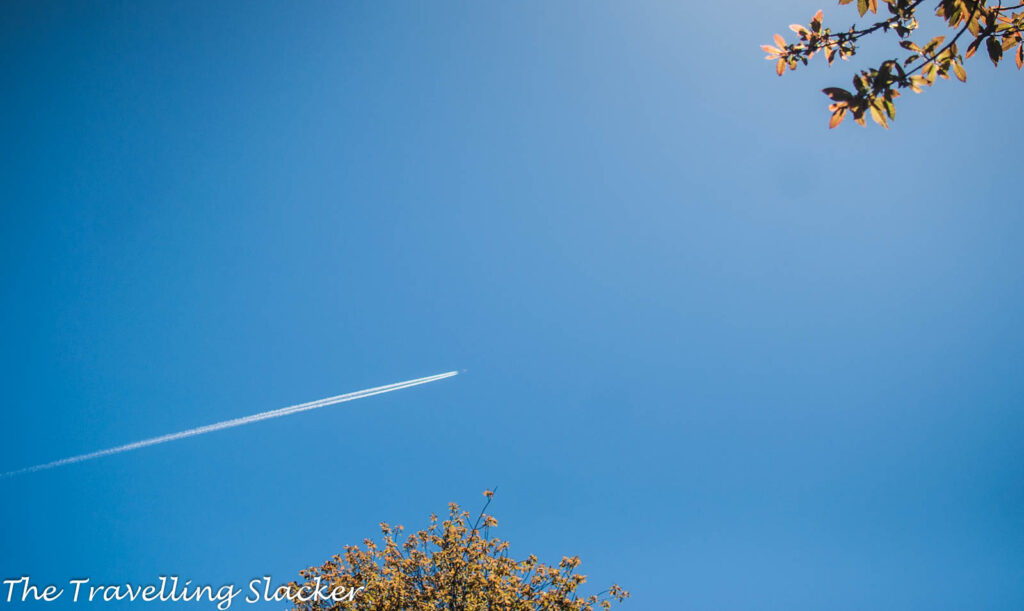 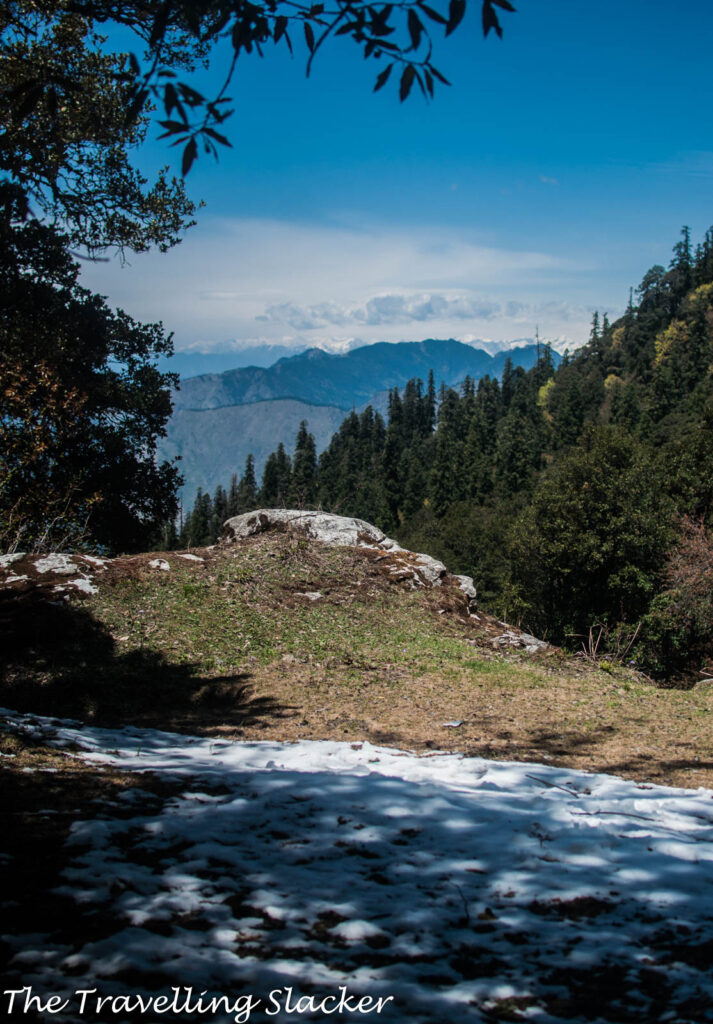 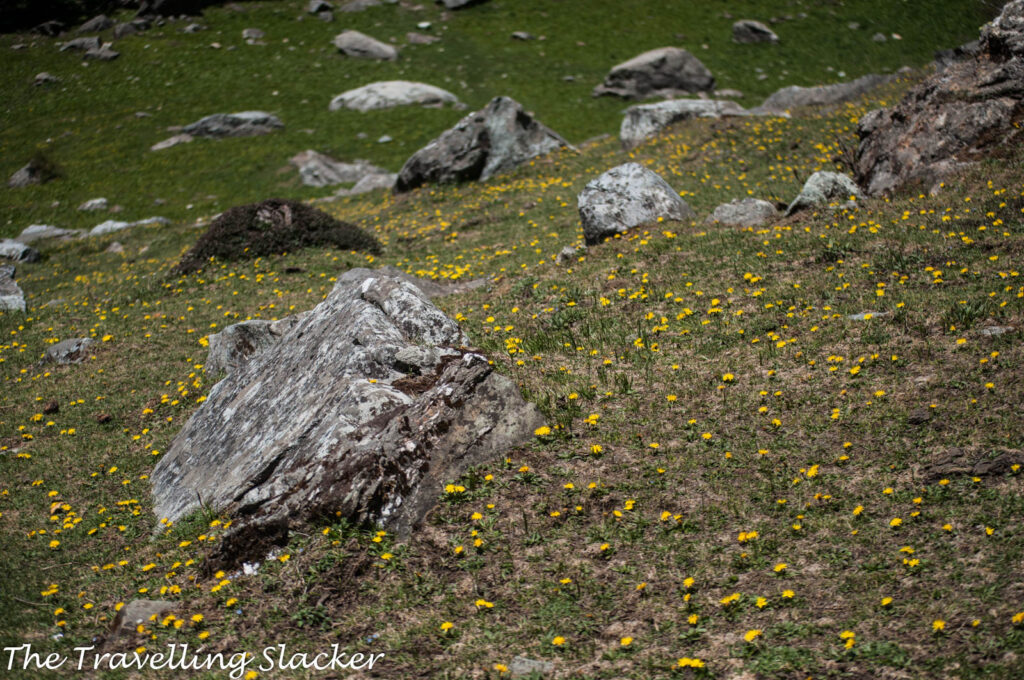 We had not seen another human being till that point but as it turned out, several locals were following us. The first one was a local woman with her kids, all with exotic hazel-colored eyes. She told us about some temple nearby but we had already made up our mind to return and did not want to climb back. She was crossing the pass to meet her relatives in Kullu Sarahan.

The next bunch of people were no ordinary people but the orchestra of the Devta of Kullu Sarahan, followed by the Devta himself, carried by a lucky servant of the deity. Apparently, the deity was making a round of the other villages and now going back to his place across the pass. They rested at the top for a while, happily posed for photographs and demonstrated some of their instruments. 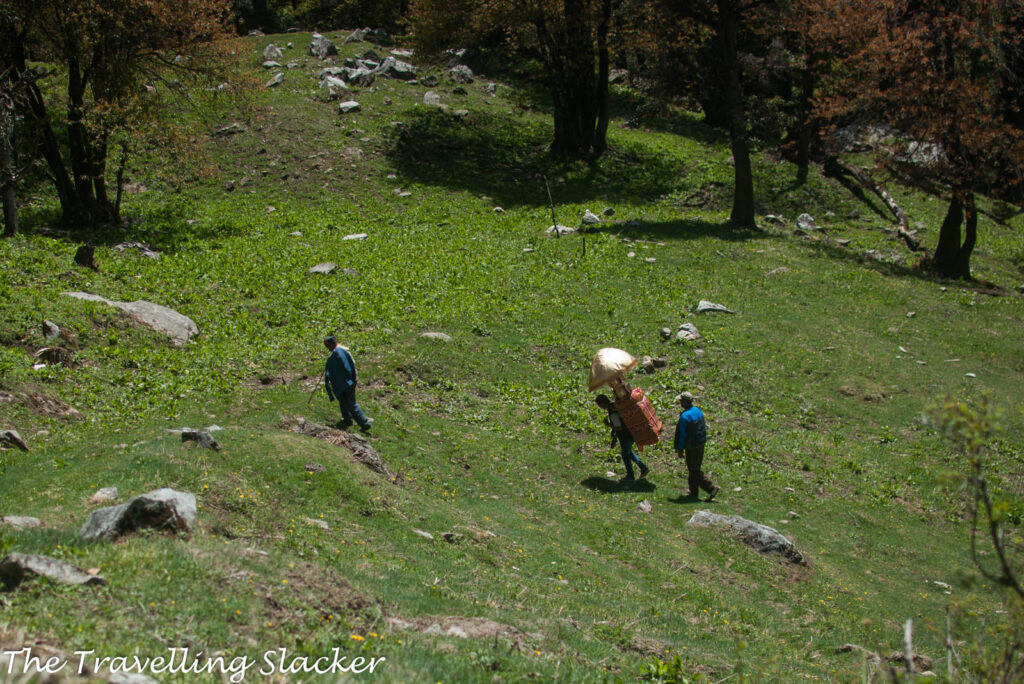 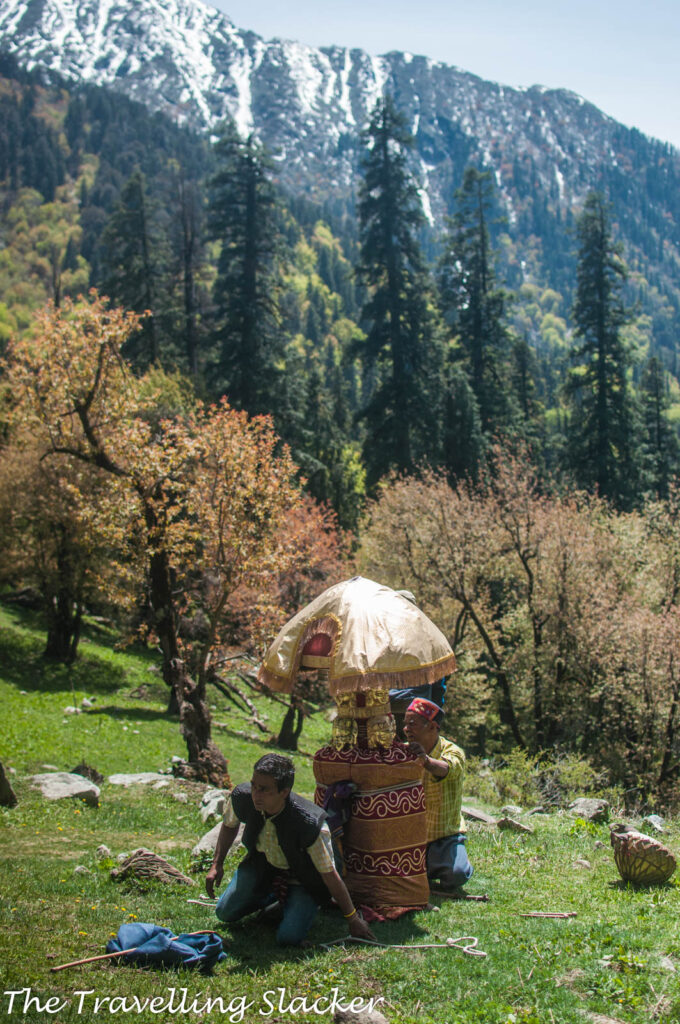 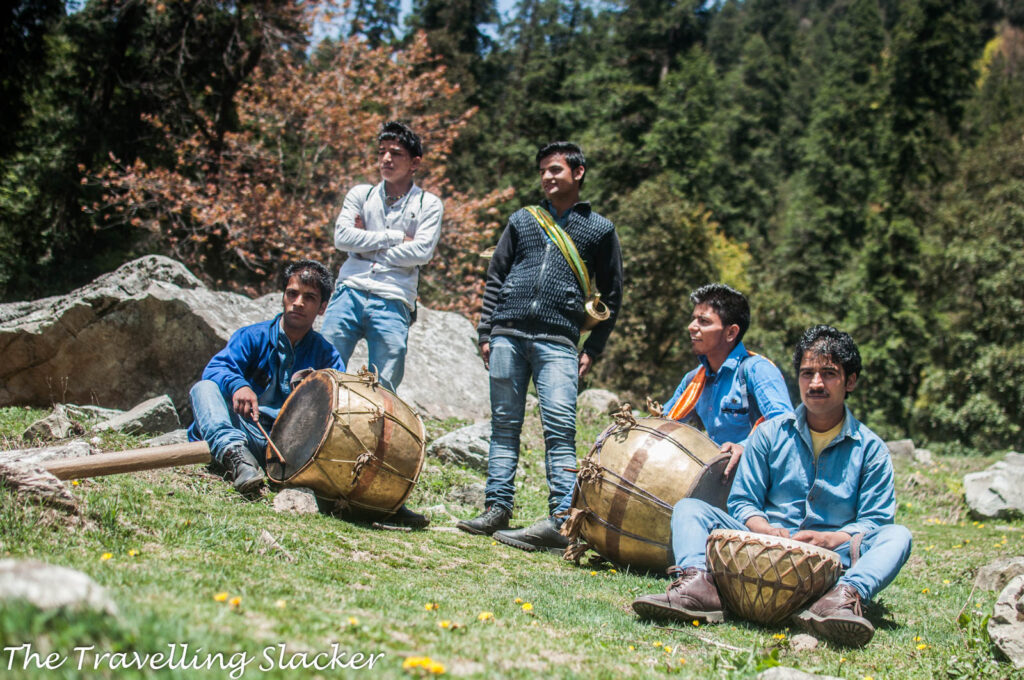 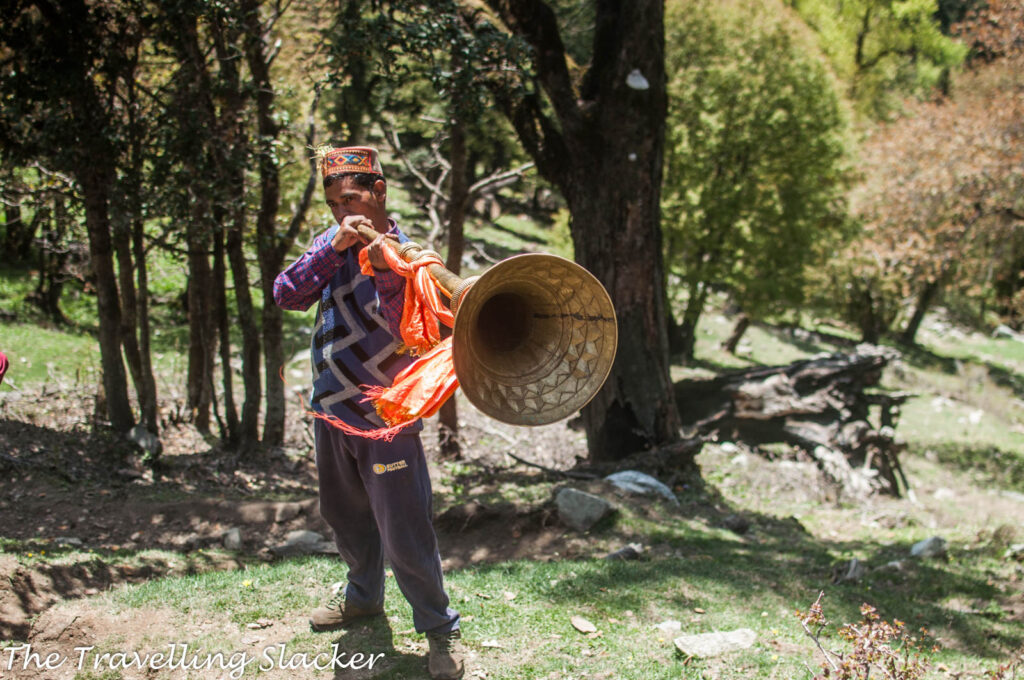 The return was event-less after that. But with the trek done and no pressure to speed up, we had to time to observe the jungles and the plants more attentively. There were large mushrooms, moss-covered rocks, and scores of unknown creepers that should keep a botanist busy for a while. As for myself, the most camera-friendly were the primulas growing all over the ground. 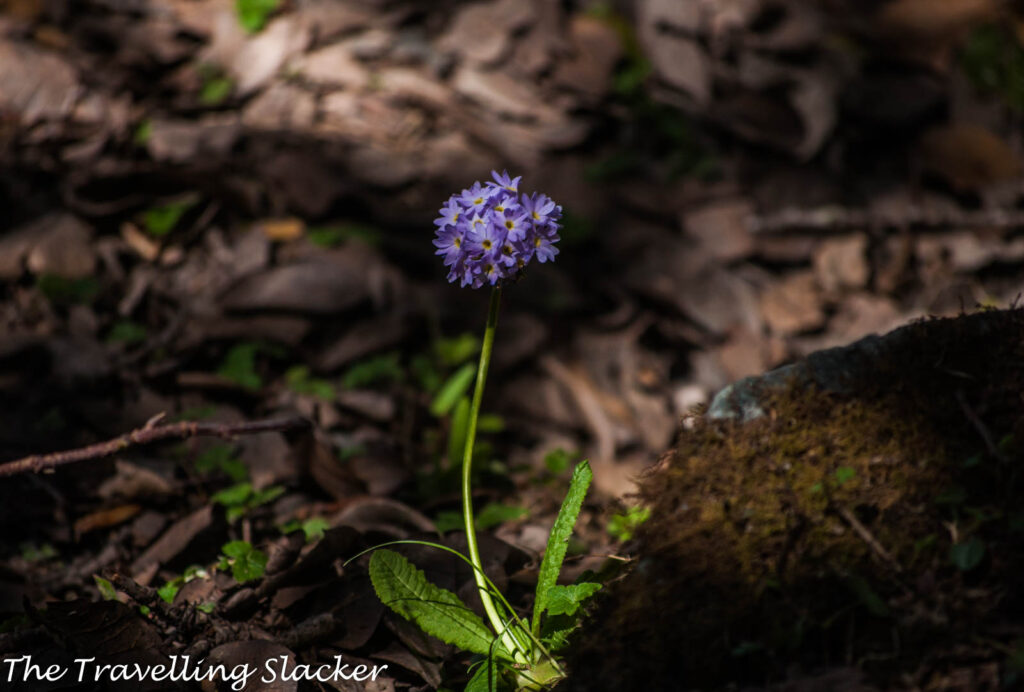 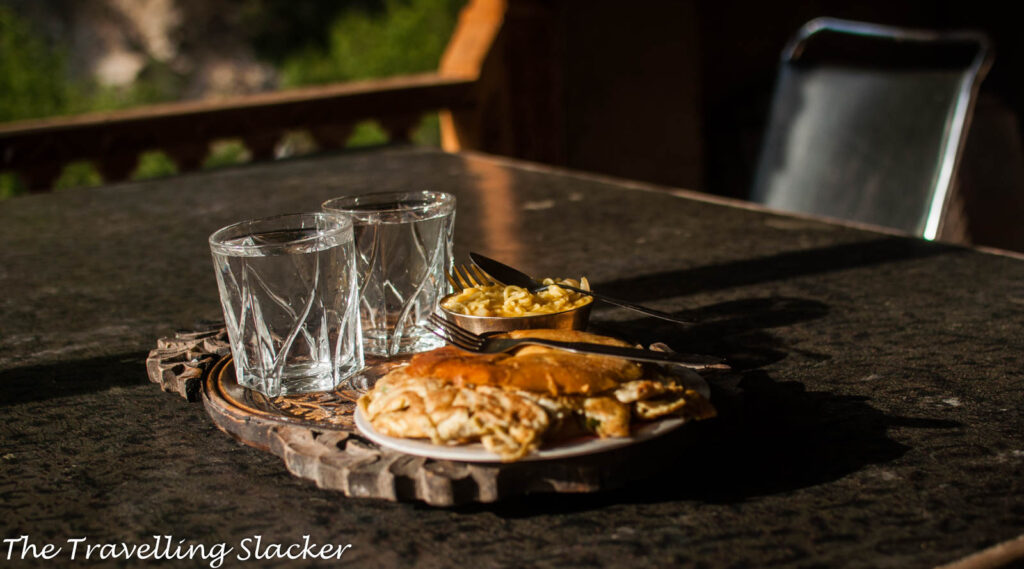 Where exactly is Bashleo Pass?

Bashleo Pass is located in the Falachan Valley, which is a sub valley of Tirthan Valley in the eco-zone of the Great Himalayan National Park. It is a part of Kullu district. The pass connects Batahad or Bathad village to Kullu Sarahan on the other side.

How to Reach Bashleo Pass?

The trek starts from Batahad village which is around 10 KMs ahead of Gushaini. The full route will be Delhi-Chandigarh-Mandi-Aut Tunnel- Banjar-Gushaini-Batahad

The good news is that regular HRTC buses are available throughout the day to Batahad. If you do not see them in Aut, then reach Banjar and check.

How long is Bashleo Pass Trek?

The distance from Batahad to Bashleo Pass Top is around 10 KMs and takes 4-5 Hrs. You can go down on the other side to reach Kullu Sarahan.

Where to Stay in Batahad?

There are homestays in Batahad where I stay regularly.