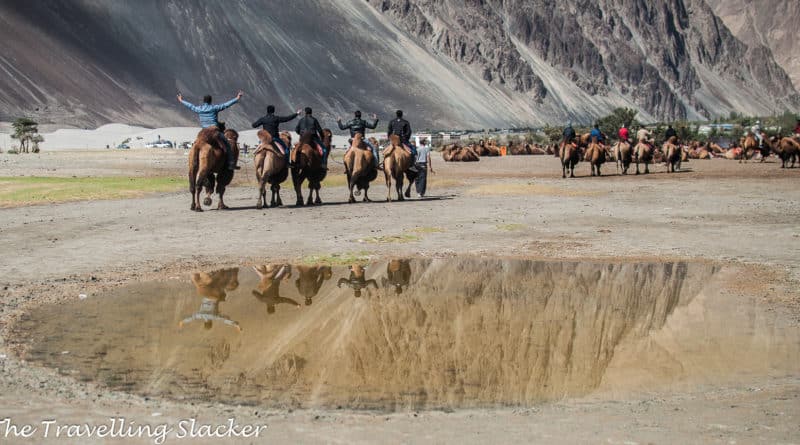 Bactrian Camel Ride in Hunder is a touristy kitsch, like many other things in popular tourist spots of India, such as those out of depth yaks in Manali. Nevertheless, they seemed to be comparatively better off, and happier while munching on seabuckthorn berries on the banks of Shyok. I was never going to opt for a joyride on them, but I did want to photograph them. After all, where else in India will you see them?

But before getting into the camels, I need to talk about a few things regarding the Silk Road, which has always been one of the most fascinating concepts to me. The very idea of such an economic superhighway from 2nd century BC seems far ahead of its time. Most people associate China and Central Asia with the Silk Road but there were several additional routes that ran deep into the Indian subcontinent. Also, there were maritime routes that connected various major ports of the peninsula to other major trading centers of Southeast Asia, Arabia, and the Horn of Africa.

Now, at least as of now I don’t have the resources to visit the actual Silk Road sites in Central Asia. As far as India is concerned, most remaining archeological sites related to the route are not in a particularly good shape although they are in the tentative list to be declared as an UNESCO World Heritage Site collectively as Silk Road sites in India (you can get a complete list in the given link). Most of these sites are very obscure and I have rarely met anyone who has visited them.

In that sense, I see the double-humped Bactrian Camels in Hunder to be living fossils, remnants of a glorious past when Ladakh was at the crossroads of the most happening economic zone of the ancient world. Their ancestors must have carried silk, cashmere, and other items on their backs and practically made this trade possible. They no longer enjoy the same prominence in the this age but they are still making some locals earn a living by carrying tourists on their backs for short 30 minute rides.

So, what is fascinating here is their very existence in this location. Bactrian Camels are primarily natives of Central Asia. They are even named after Bactria, the ancient region covering parts of Northern Afghanistan, and Central Asia. Still the highest concentration of them can be found in China, Mongolia, and Kazakhstan. There is even a wild variety of these camels which is considered to be a different species. India has a hundred odd and probably all of them can be found in this small village of Hunder in Shyok Valley (which is generally clubbed with the Nubra Valley by most tour operators).

So, coming back to the present, I was enjoying the apricots of Turtuk for two days and needed to return quickly. So, decided to take a short break at Hunder and see the camels before going back to Leh. A car was fixed in Turtuk already and I left as early as possible and reached Hunder by 9 AM. Hunder is actually just a sleepy village. What attracts people are the sand dunes just outside the village, on the banks of the Shyok. The camels also generally stay in the village and come out at the designated time for the tourists every morning and aftenoon.
I had reached a bit too early and the camels had not even arrived. A restaurant and washrooms have been built here for tourists. So, I decided to just order tea and wait. Some other tourists had also gathered by then. After a while, I hard the sound of bells and looke dtowards the village. There was a cloud of dust, and then they started appearing, not one but two, but a whole caravan. You can call it touristy and cliched but it was one of the most cinematic entries I had ever seen.  I am sure the original Silk Road caravans looked the same.
Some of the people went for the rides. I noticed that they locals were quoting various prices from INR 300-600. I don’t ride animals but I also understand that the locals make a living through this activity, that too for a few months in the summer, and also the camels will have nowhere to go if not for this. I was wondering if they would also ask me to pay for photographs but no one did. So, I clicked the camels, the seabuckthron shrubs, and blue streams crisscrossing the cold desert.
It took just around an hour to click whatever I wanted to click and then I moved on towards Leh. After the sumptuous experience in Turtuk, it was just an additional detour for me. However, it is not about these camels or about the ride, it was about where they came from, and the role their ancestors played in shaping several great civilizations.

10 thoughts on “Bactrian Camels of Hunder: Relics of the Silk Road”